What did you do to or on your Kubota today?

I have been waiting for new turf tires for my B7100 for years now. Pulled the old tires and rims , loaded them into the back of my Jeep ready to take them to the tire store for mounting. 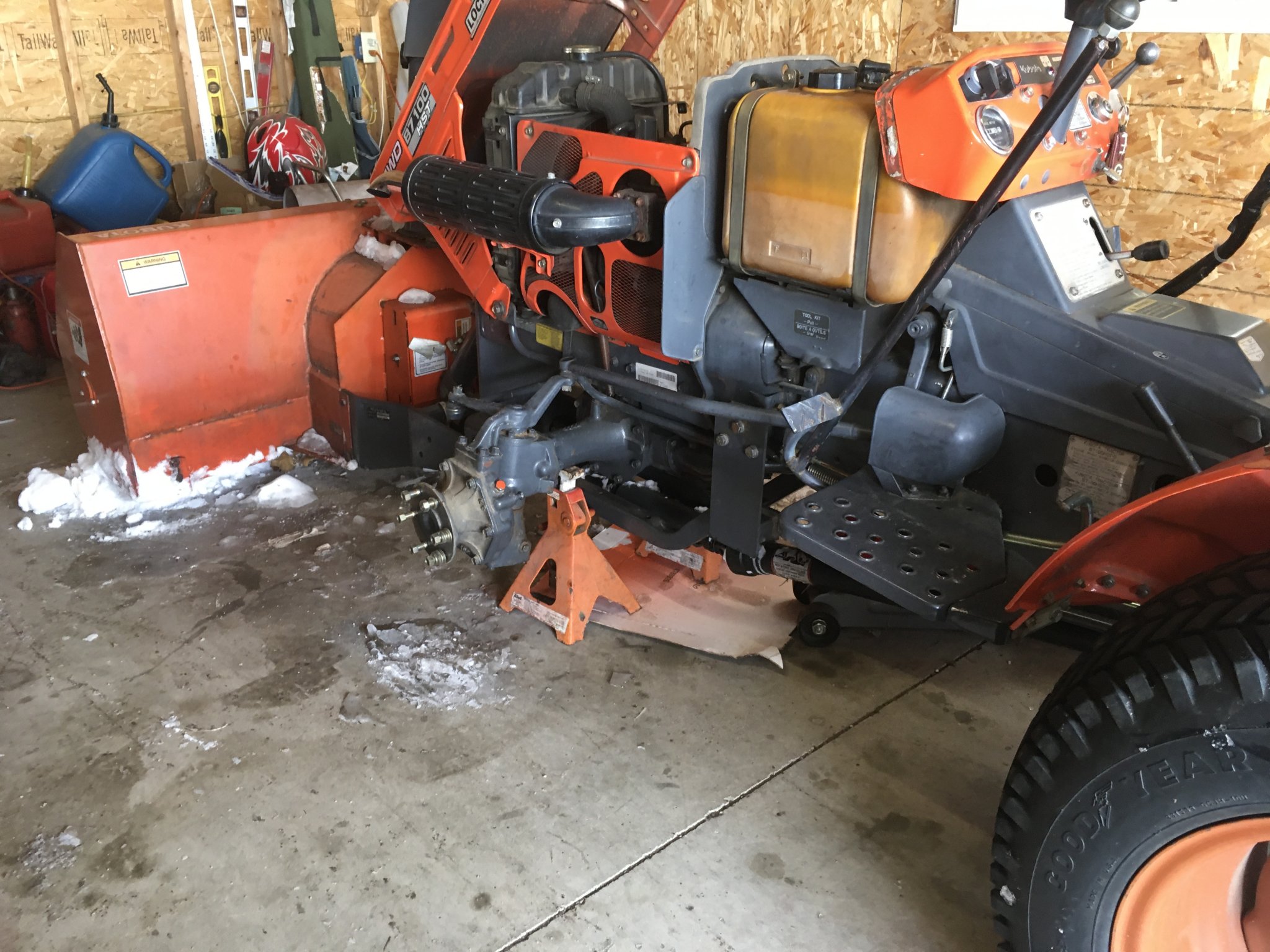 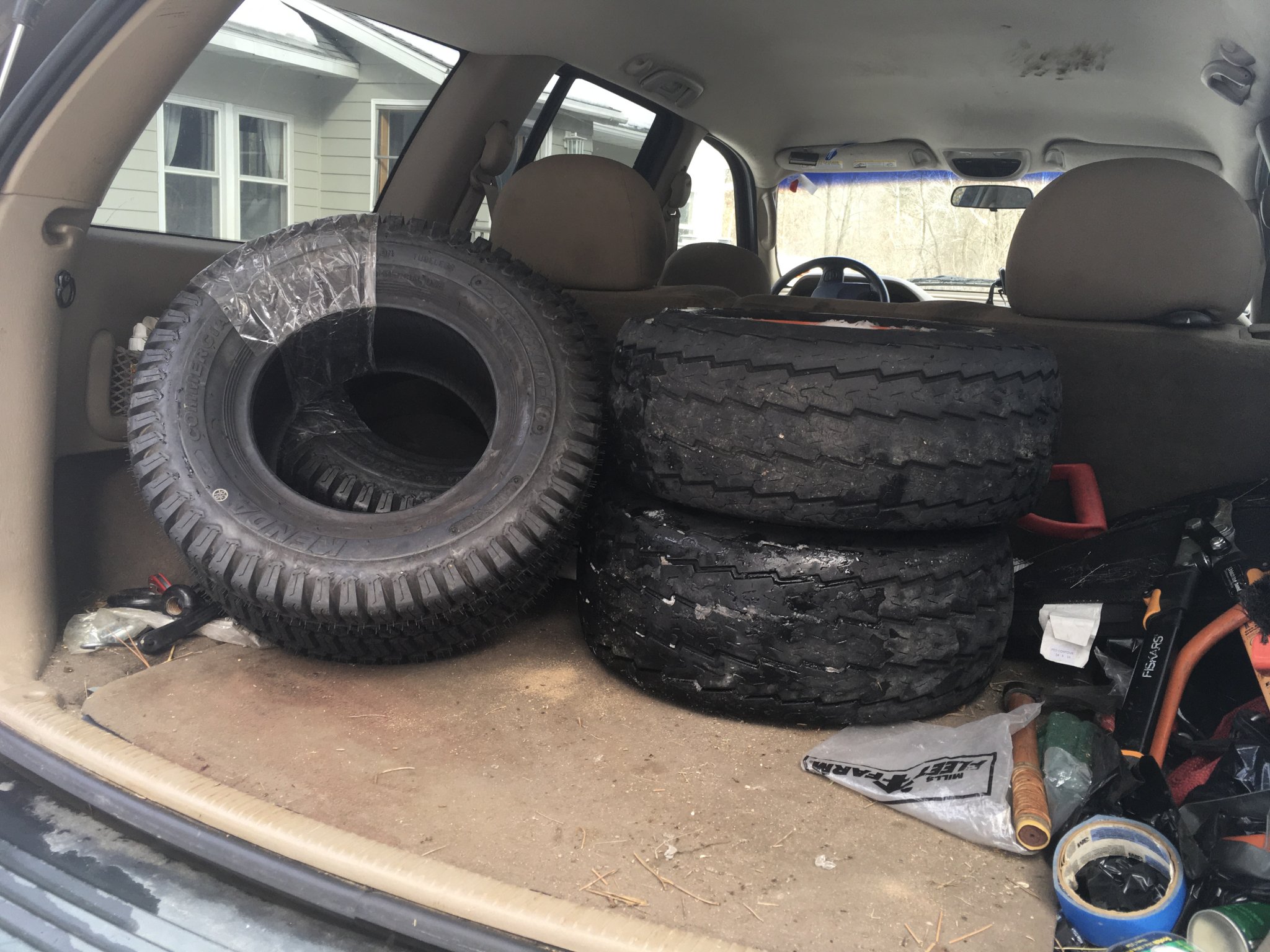 Nothing today, but think I’ve run snowblower 4 of last 7 days. 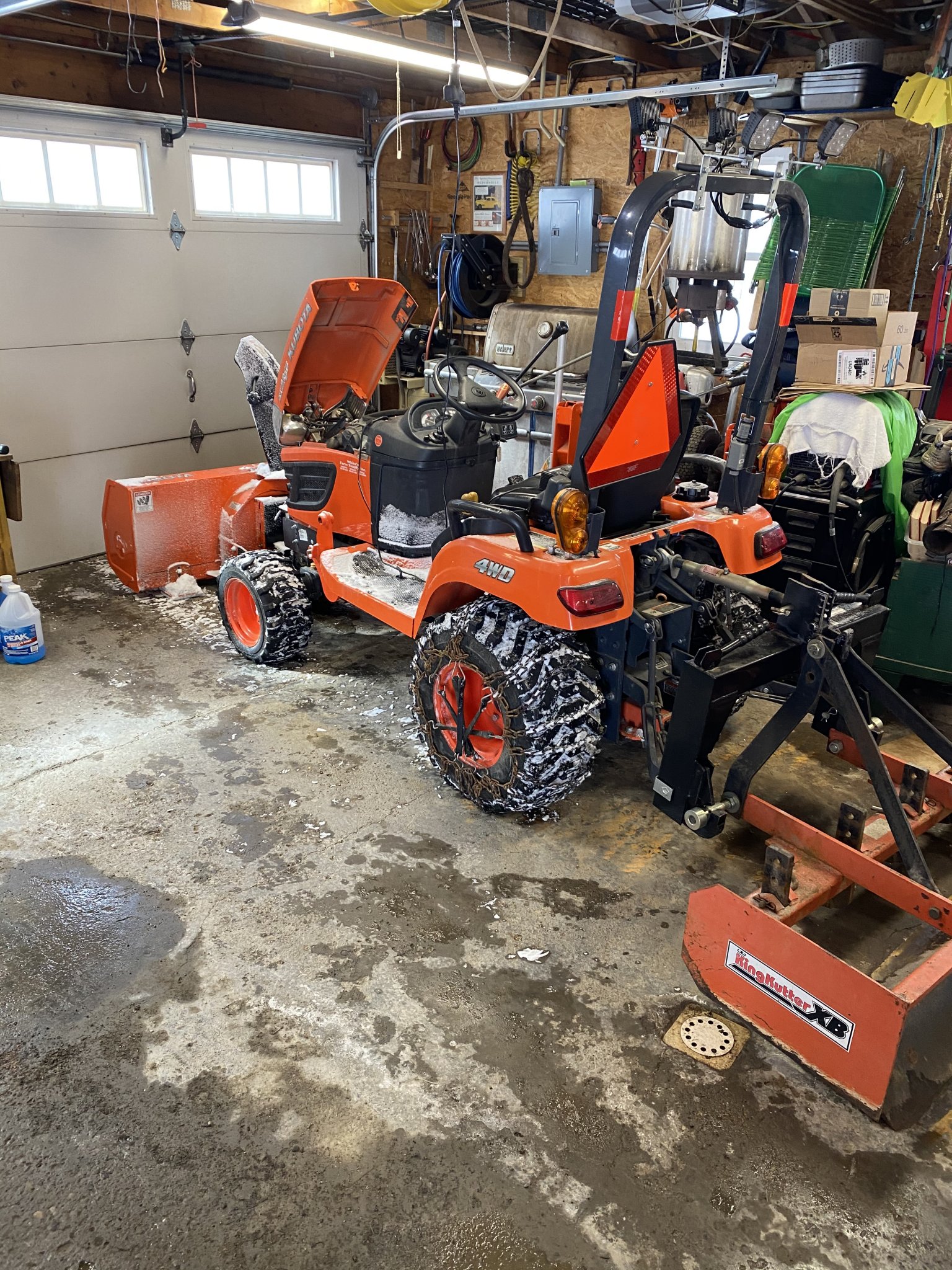 We’re actually getting a thaw today into next week. Sap lines were today run in my woods today by neighbors that do commercial syrup.

I try to sand my driveway after every snow blowing. It has 2-4” of ice on it now.

While some may think this is ugly, my gravel driveway looks great to me after today’s thaw. There’s many layers of grit that will surface as the ice recedes. Not slippery at all today. 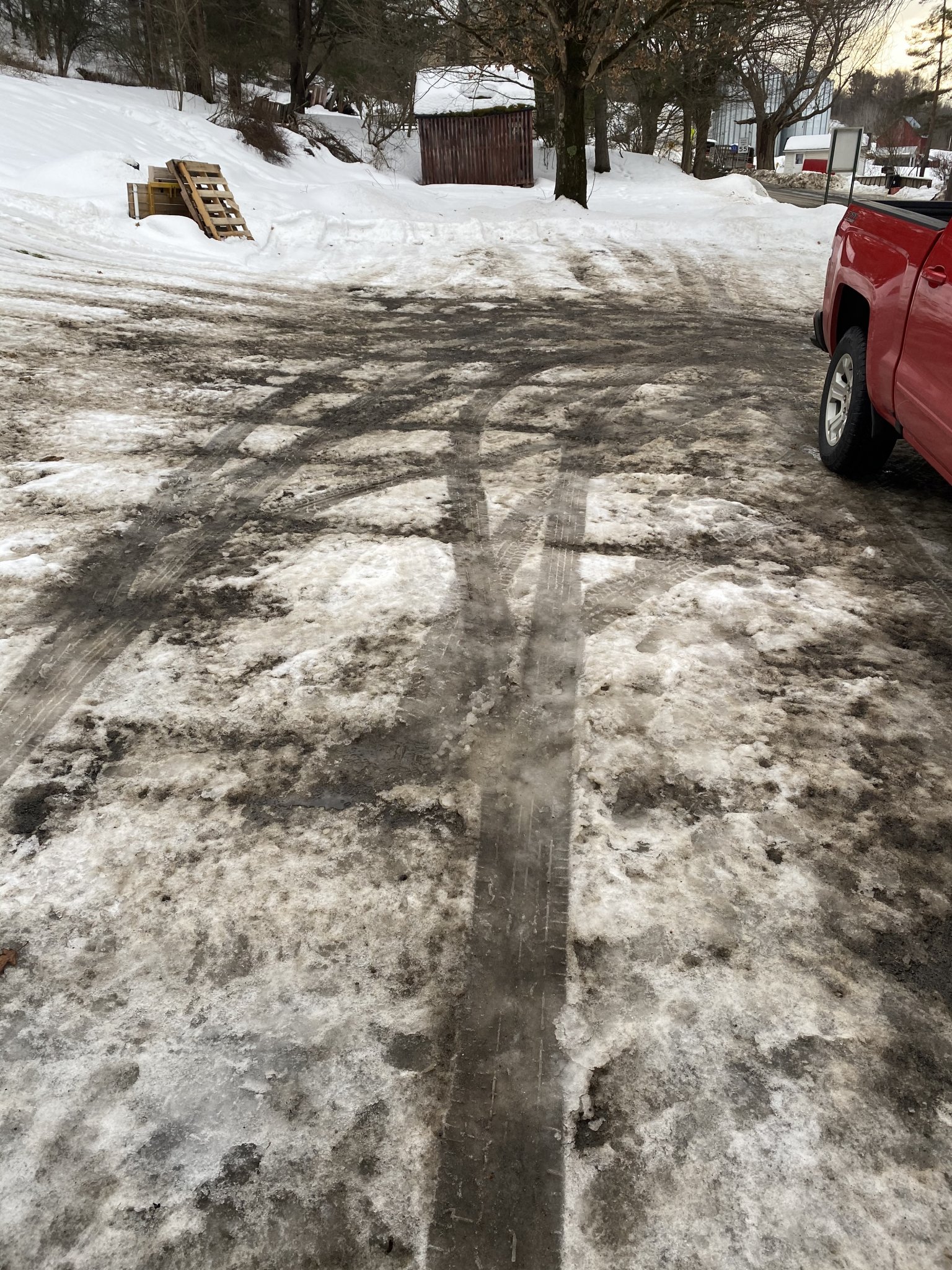 bolted these 10 ga steel tubes to a HF electric winch that will hang from my forks. This is the plan to lower and store the snowblower in the basement down through the bilco doors 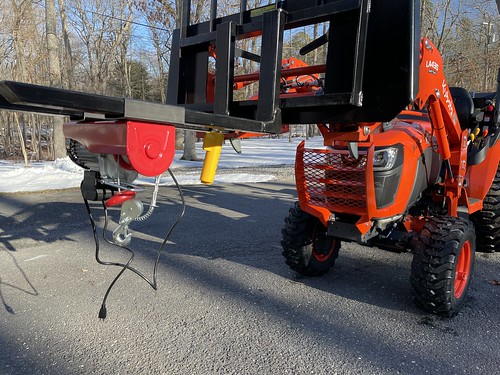 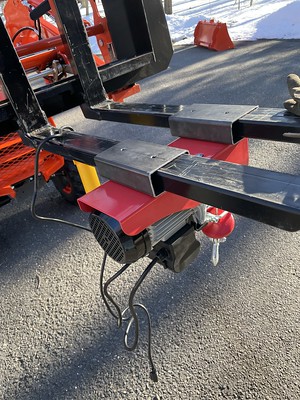 Got another half-ton of pellets last weekend.

Can probably thank our thaw on that.....

Stove is a Harman XXV....great stove. 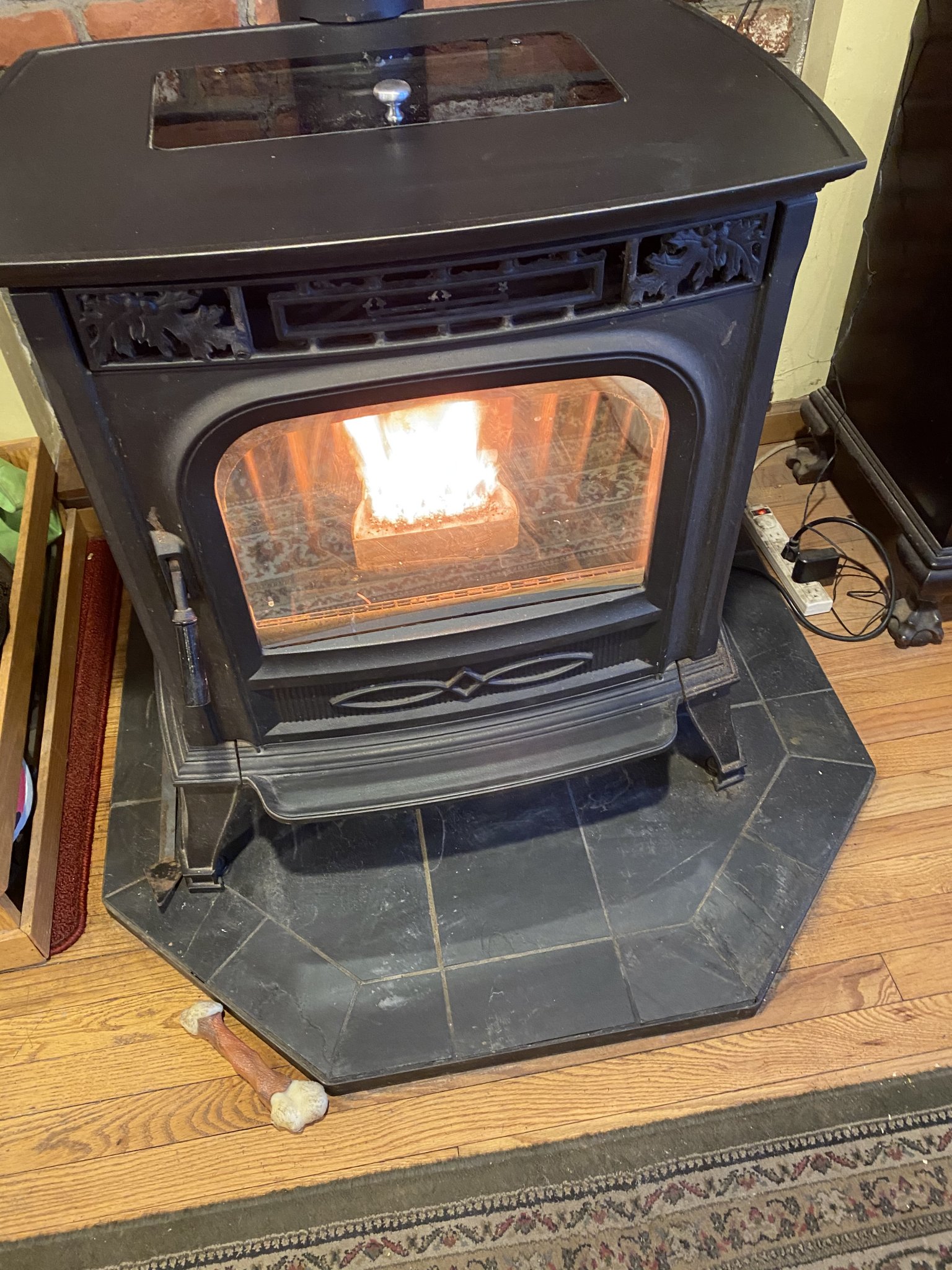 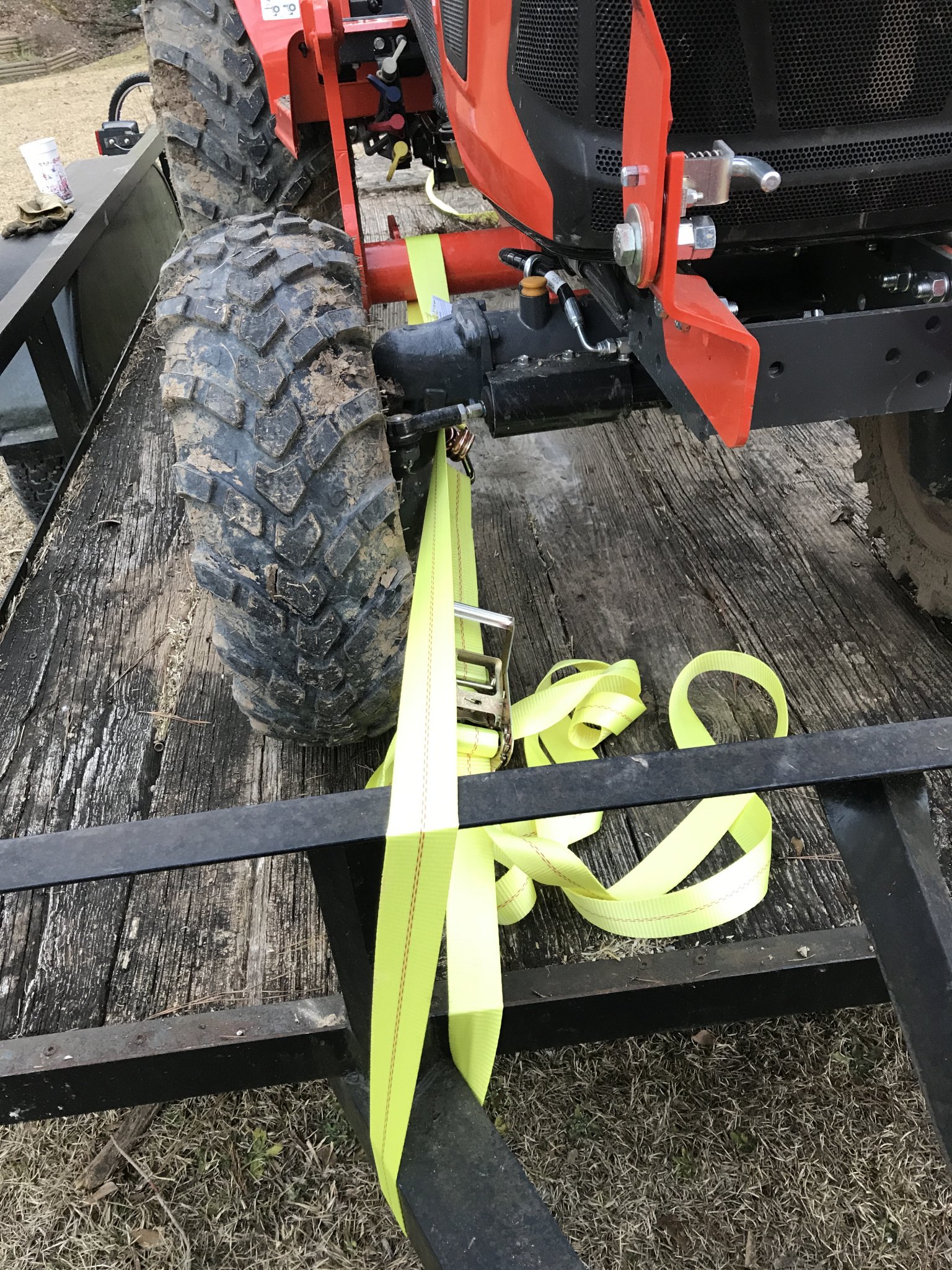 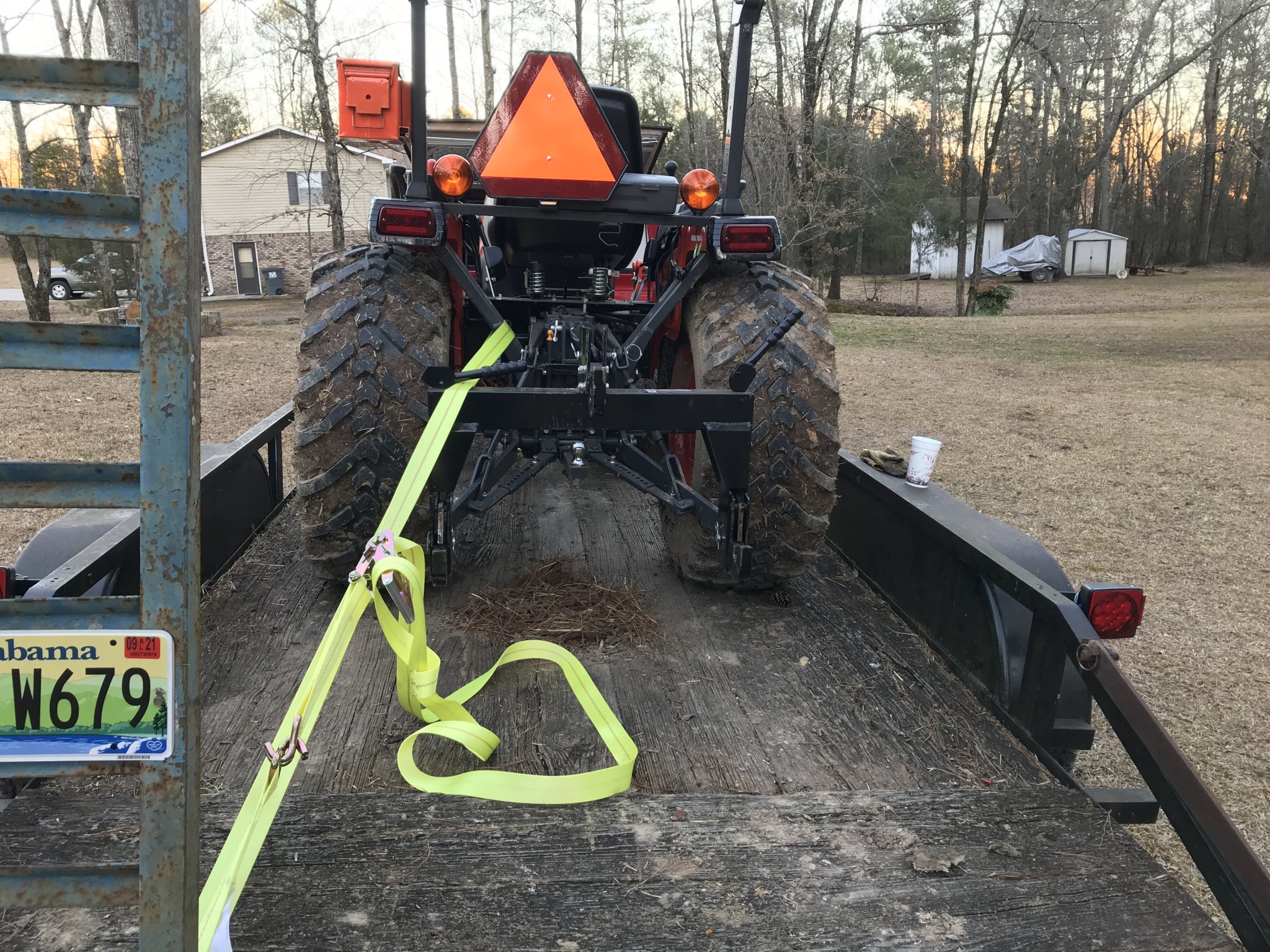 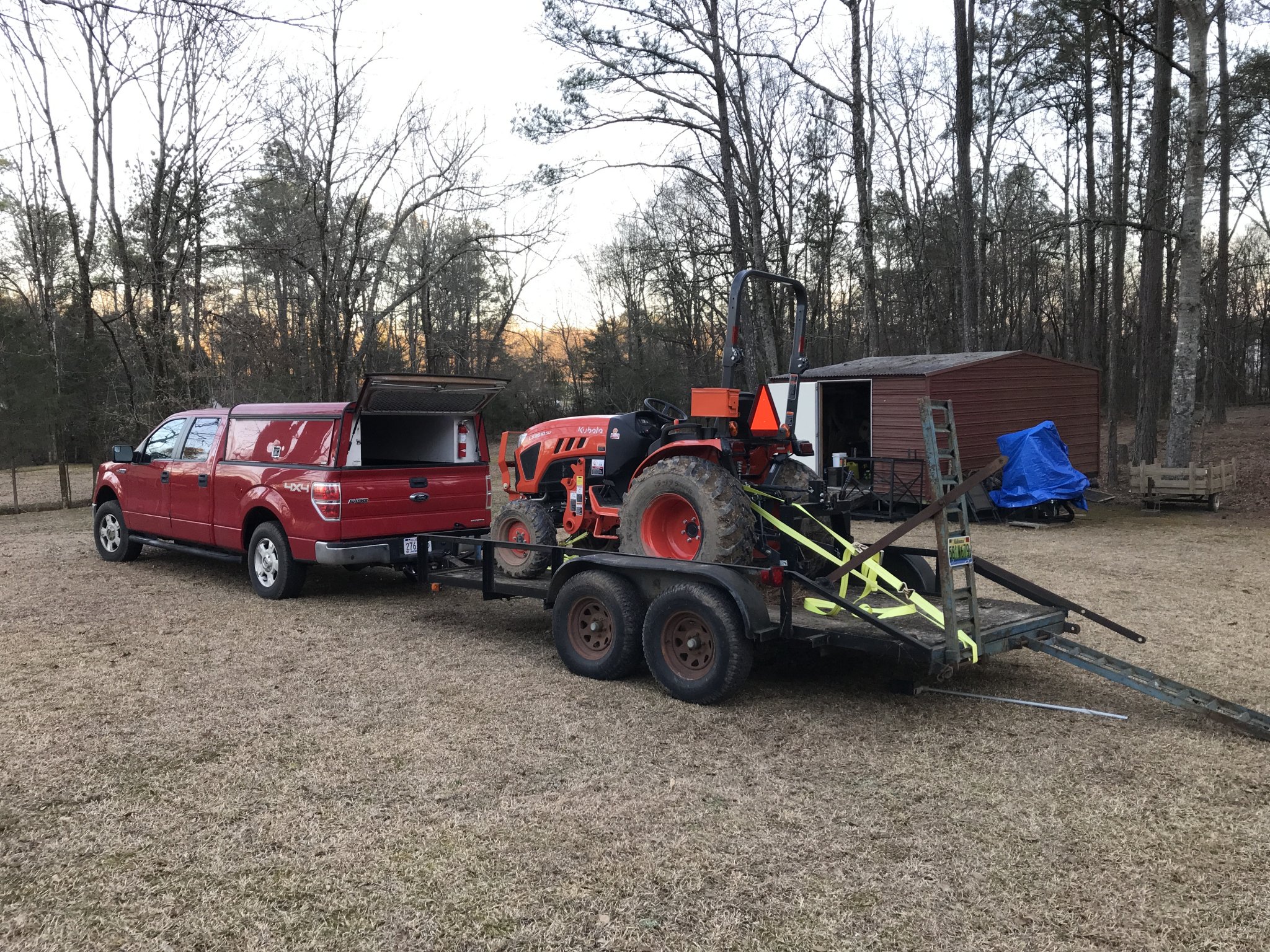 Yeah yeah, I know, should use chains, not straps. But I went around smooth edges and avoided anything sharp with the strap, and hooked it to itself in a loop. I went around the FEL mounting bracket on the front, and around the ROPS on the rear, then just found the most solid place I could on the trailer to loop back. I only put two on it for mock-up about where to strap it, but I actually will use 4 before that trailer rolls one inch. They're rated 3000 lbs working load each, meaning I have the tractor restrained with 6000 to the front and 6000 to the rear when I get 'em all on. If I were hauling any distance, I'd definitely be using chains. I've just gotta go about 8 miles with it to the dealer for 50 hour service, so figured I better mock up what I needed to do to load. Gotta get a brake module for the truck, too. PO of the trailer told me it had all new brakes a couple years before I bought it. I'll dry run to make sure they're working before I take off with my 'bota on board. I did some minor repairs/upgrades right after I bought it, including LED lights on the trailer, all the connectors on the braking circuit, as well as a new 7-pin connector. New jack, too and a little cosmetic work. Old trailer had good bones, just needed a little TLC. Definitely worth the $600 I paid for it. Managed to lose my first lynch pin, but not off the tractor. Lost it from one of the ramp hinge pins on the trailer while figuring out the best way to set up the loading ramps. No idea how I managed to do that. They were all there when I started. So, grabbed a spare and replaced the one that went MIA.

Got up this morning to a beautiful day, and me and the missus raked and picked up leaves around one of our flower beds until lunchtime [it's a big flower bed with a water feature, what can I say]. We put it all in by shovel, pick, wheelbarrow, and a WHOLE lot of elbow grease. Used the 'other' orange tractor (Husqvarna) for the leaf moving. Then I hauled a little dirt with the LX to fill up some old stump holes in the same area (we both have very sore knees tonight from stepping in holes while cleaning up the leaves). Pushed a bunch of stumps and debris back to the stump pile. Flattened some bumps with the BB where we had a veggie garden several years ago, and filled up some more stump holes. Then the neighbor came over and asked if I could help him out with another 10 yards of screened topsoil. I had to move all the soil one bucket at a time across his yard, because he had the dump truck drop it next to his driveway on the opposite end of the house. He's got the same marshmallow clay that I do at the moment, and 10 yards of screened top on a dump truck is likely sink out of sight in either of our yards. I made a LOT of trips and other than me forgetting I was in 4x4 a couple times and turning too sharp, and a few spots that were still damp, the R14's didn't tear up his yard too badly at all. He was pretty tickled about not having to move 10 yards by shovel and wheelbarrow, and since the grass hasn't started greening up yet, it should be OK when it does. I've made a much bigger mess in my own yard being impatient with the weather. I'm gettin paid on Saturday when he cooks up some Boston Butts and some Beef Brisket and some ribs ....... He's a great BBQ cook.

Pretty close to 49 hours now, so can't do any more big jobs until I get the warranty service done. Figured I'd let the dealer do it because I'm not set up to handle that much oil yet, and really don't have a place to get out of the weather to do the work. Hoping to correct that with a new 24x36 shed where the red one is in the background. Already have 220V power run out there (trenching done by hand with a sharp-shooter shovel and a pick), so electrifying the new shed should be a piece of cake, but gotta move the old one to a temporary place in the yard until the new one is finished.
N

My solution for the "frequent flyer" linch pins... cable loops. 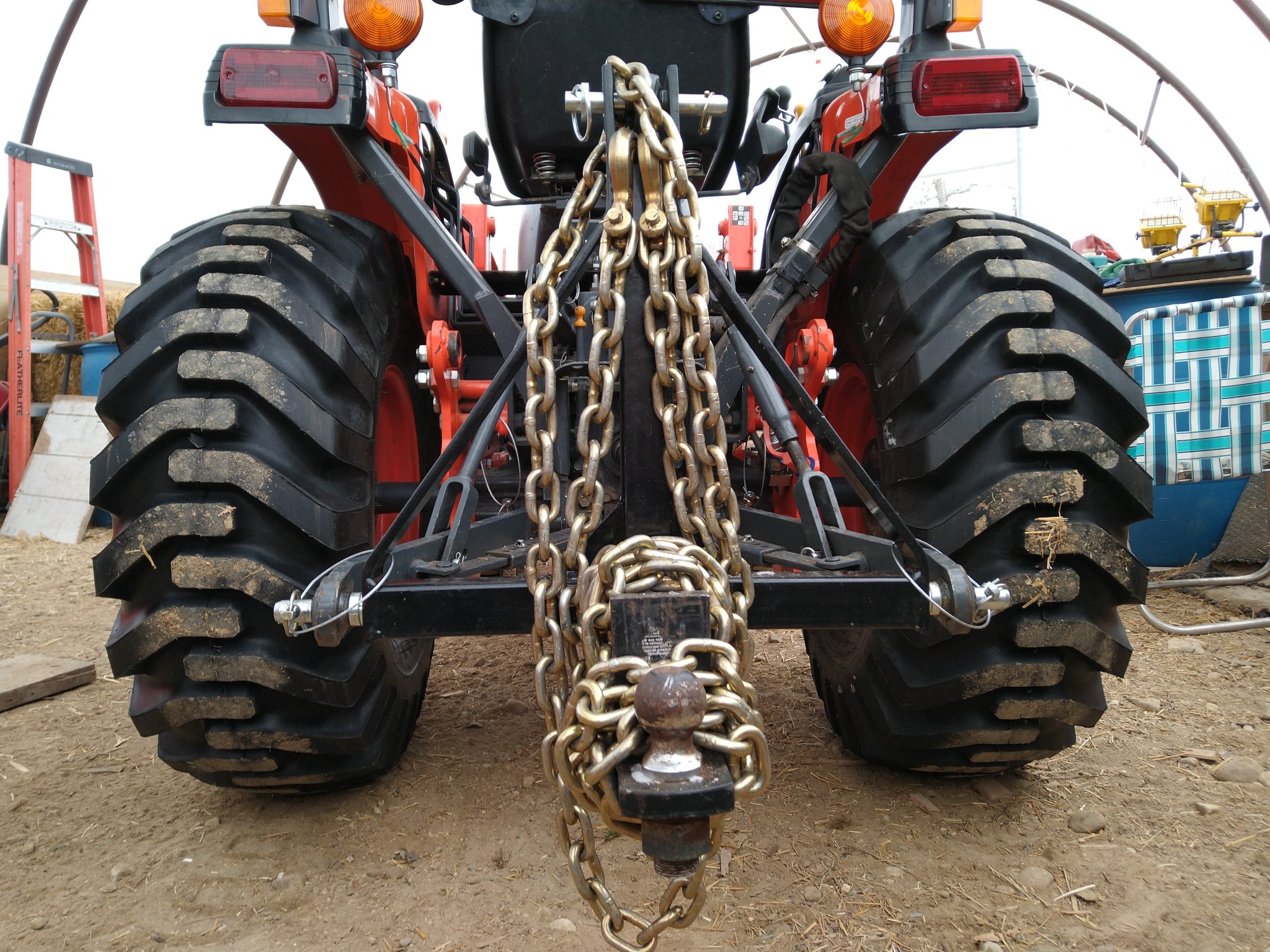 Old_Paint said:
I did this yesterday.....

Maybe invest in some harbor freight hooks? Mine fit perfectly, no drilling required. 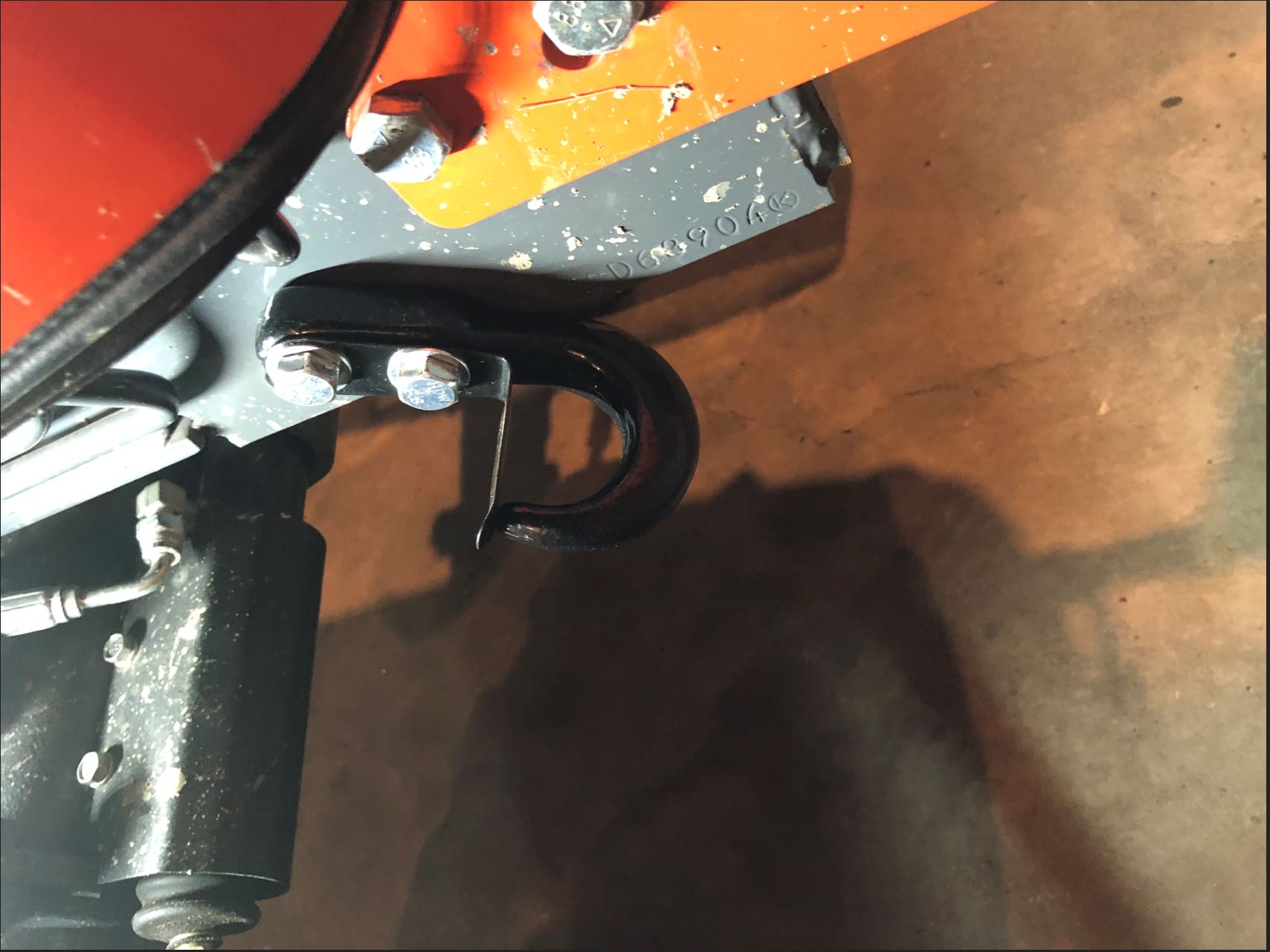 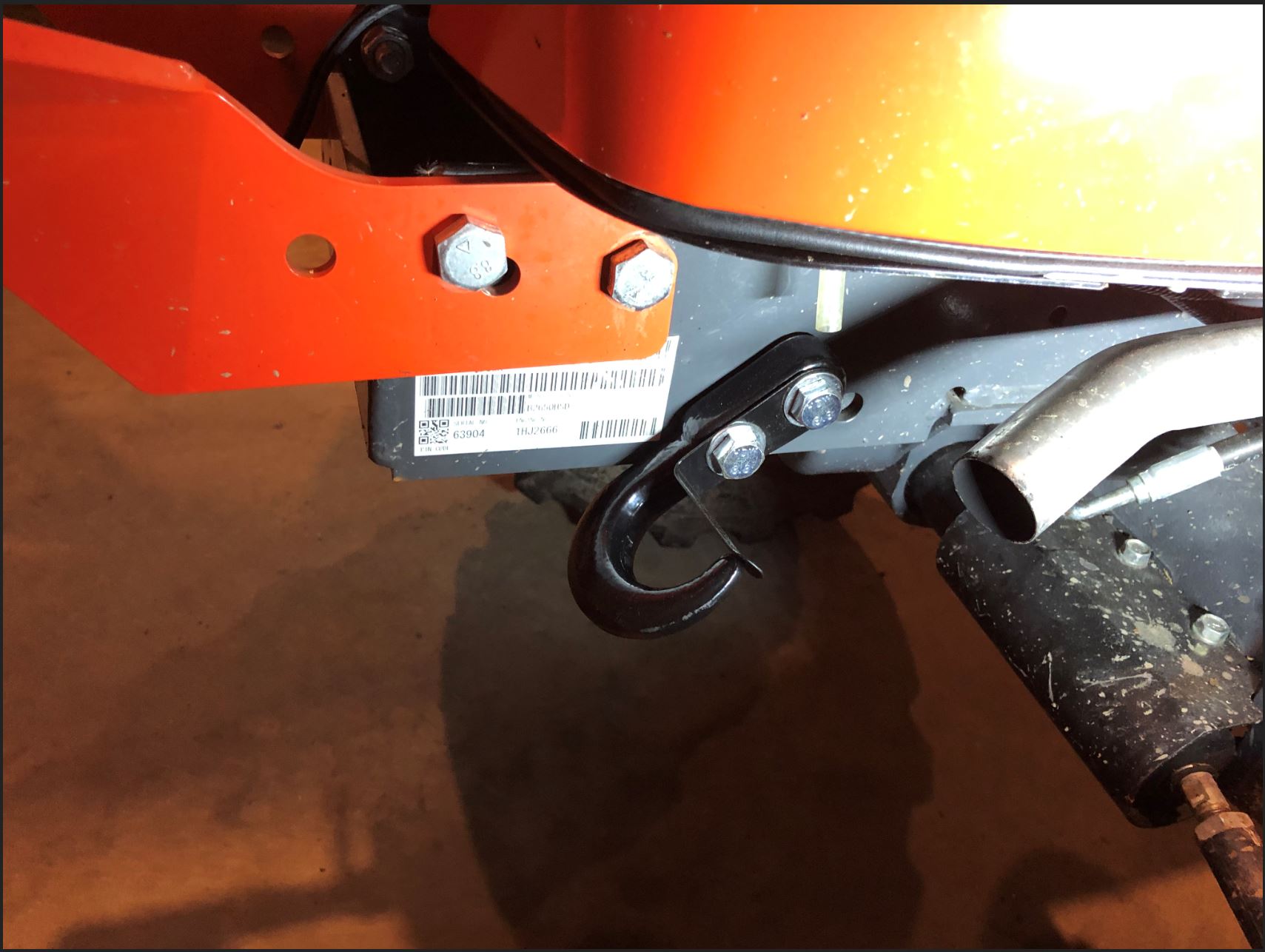 I like those. I'll have a look today. They didn't have any ratchet binders for 5/16 chain when I looked on Tuesday. Plenty stuff for 3/8" but I don't think I want or need a chain that heavy. 20' 3/8" chain is a whole lotta heavy, and not very useful for anything but hauling the tractor, meaning something else I have to store for that rare occasion I'll actually use it.

I have a 20mm Ammo can (HUGE) that I'm gonna figure out a way to mount on the trailer for storage. That'll be a lovely place for hauling hardware and a few small spare trailer parts. Need to find or fabricate a good spare tire mount, too. Finding the place to mount it is the issue. This trailer is a lane full running around in suburbia.

Gotta go with the tailpipe mod. At first, I just thought it was a lot of whining about nothing, and surely Kubota didn't do anything that was bad for their own designed add-ons. At nearly 50 hours on mine, I'm learning a lot more about how imperfect tractor designs can be, despite their simplicity. It has been a wonderfully fun learning curve, and so far, nothing that bothers me to the point of regretting my decision to buy my LX. Running the chipper showed me exactly what the complaint was about exhaust on the FEL. Even more concerning is that it's pointed straight at the LH bucket cylinder and hoses. That can't be good for either. Not sure how hot it's getting things, but I am sure that no added heat is required nor particularly wanted on the hoses or cylinder. I suspect it ain't very nice after 4 hours at 2300 RPM. The heat alone bothers me a lot more than the soot its putting on everything. I see you have a BH77 hoe, so I'll assume you also have the LA534 loader on your B. You're gonna want the exhaust mod too.
Reactions: 1 user
D

nbryan from the picture it looks like you may have a bit too much air in your tires. Just a thought.
Reactions: 1 user
D

Old_Paint said:
I like those. I'll have a look today. They didn't have any ratchet binders for 5/16 chain when I looked on Tuesday. Plenty stuff for 3/8" but I don't think I want or need a chain that heavy. 20' 3/8" chain is a whole lotta heavy, and not very useful for anything but hauling the tractor, meaning something else I have to store for that rare occasion I'll actually use it.


Gotta go with the tailpipe mod. I see you have a BH77 hoe, so I'll assume you also have the LA534 loader on your B. You're gonna want the exhaust mod too.
Click to expand...

For sure. I've had the tailpipe mod on mine since about month 5.

dirtydeed said:
For sure. I've had the tailpipe mod on mine since about month 5.
View attachment 55457

Cool beans. Thanks for the info.

Spent another hr snow blowing. We got at least 8” in the last 24hrs.

Lol, when the tree butts get chain hoisted up for pulling with the 3-point there's no lack for ballast and traction!
And if I need my neighbor's grader to pull my truck out of the ditch again, I'll have something decent to use this time! The chain doesn't live on the tractor hitch unless I'm skidding trees out of the bush. The rest of the time it's in its bag in the pickup truck.
N

D2Cat said:
nbryan from the picture it looks like you may have a bit too much air in your tires. Just a thought.
Click to expand...

The tires are at 14 PSI which I expected, as I've already reduced their pressure down from the manual specified 20 PSI. Yes, the treads are not contacting at the edges on the back tires, but is going down to 12 PSI or even 10 PSI going to be a bit soft? I'd hate to lose a tire bead if I hit a stump with lowered pressure. Also, the tires contact better when the box scraper, backhoe or chipper are mounted as ballast.
Have you run your rear tires at 10 or 12 lbs under load and rough surface stress?
D

The tires contact way more with the backhoe attached. Almost 100 % across the width. I'm good with that. Btw just air no fill in my tires.
Reactions: 1 user

I finally started piping the 3 rear remotes I received from FitRite Hydraulics. Brian has been super helpful and patient with an obvious newbie in hydraulics. I am still waiting for my top n tilt from him - it should be another 4 weeks or so.
I am not real comfy about breaking into the tractor piping but at least we have a break in the weather in case I fubar something. It won't be a real crisis as long as I don't have to plow.
Today I did the piping on the valve end and ran the lines to the block and FEL. Brian sent some air hose that I mocked up to determine the lengths of each run. He then provided the actual lines. Spot on lengths I sleeved them in appropriate orange fabric.
In the next day or two I'll finish.

@ctfjr wow, that is going to be an incredible set up!!! Working with Brian is awesome, it's understandable why his backlog is 6 months lol