Well, I have 3 ton Lennox heat pump that was installed new in September 2016 with a 10 year warranty. In October 2017, the blower motor had to be replaced. In April 2018, the condenser fan motor had to be replaced. In June 2019, the evaporator coil had to be replaced (leak). In September 2020, the thermostat had to be replaced due to overcooling. Miraculously, nothing broke in 2021. Today, they found another leaky evaporator coil. Even though the replacement is included in the warranty there are no parts available, probably due to supply chain issues. On top of that, the estimate for the 11lbs. refrigerant when the coil is replaced is almost $1000 when the last time they charged nothing.
I hope you guys don't have any Lennox units nor plan on buying one.
Last edited: Sep 22, 2022
Reactions: 1 user

xrocketengineer said:
Well, I have 3 ton Lennox heat pump that was installed new in September 2016 with a 10 year warranty. In October 2017, the blower motor had to be replaced. In April 2018, the condenser fan motor had to be replaced. In June 2019, the evaporator coil had to be replaced (leak). In September 2020, the thermostat had to be replaced due to overcooling. Miraculously, nothing broke in 2021. Today, they found another leaky evaporator coil. Even though the replacement is included in the warranty there are no parts available, probably due to supply chain issues. On top of that, the estimate for the 11lbs. refrigerant when the coil is replaced is almost $1000 when last time they charged nothing.
I hope you guys don't have any Lennox units nor plan on buying one.
Click to expand...

Once upon a time I had a Lennox furnace.
NOTHING Lennox for me,..... ever again!
Reactions: 1 user

xrocketengineer said:
On top of that, the estimate for the 11lbs. refrigerant when the coil is replaced is almost $1000 when last time they charged nothing.
Click to expand...

We just had to have Freon added to our heat pump, A coil started freezing up. Its a 17 year old Carrier unit with 410A refrigerant. $350 for 2lbs. And the service call, $100 a lb for the freon, ouch. its probably on borrowed time, tech says it’s most likely a slow A coil leak. Won’t be money wise to repair once the leak gets worse.

For the three houses on the property we have a 35 year of Bard (unoccupied but still climate controlled house), a 10 year old Carrier (Dad’s house), and a 25 year old Trane (my house). The week after Dad died, the Carrier quit cooling and the Bard stopped doing anything shortly after making a rather loud sledge hammer hitting concrete sort of sound. Called out the guy that has serviced them forever thinking I’d be doing well to get out for less than $7500. He fixed a couple of burned off connections on the Bard, changed out the start run capacitor because it was manufactured in 1985 and getting a little weak, changed the start run capacitor in the Carrier, and was on his way after about an hour for $281.00.

Only thing I’ve ever done to the Trane other than gently clean the coils was 23 years ago a mouse built a nest in the little box that houses the circuit board and a bunch of wires. He also gnawed several of the wires in half. Matched blue to blue, red to red, etc. and spliced it all back together as a temporary fix. Also found where he got in and plugged that hole with steel wool. Maybe someday I’ll do a more professional permanent repair but after 23 years, maybe I won’t.

No experience with Lennox. Sounds like I should be thankful for that. And I am.
Reactions: 1 user
X

I still have time in the warranty for the compressor and the condensing coils to be replaced too. Those are the only original major components left, by then everything would have been replaced at least once.
I had Bryant/Carrier units before and never had that many problems. When I was going to replace the unit I looked up a Carrier dealer and when they showed up, they badmouthed the Carrier products and pushed this Lennox crap. When my other Bryant 2 ton unit (installed in 2005) rusted out in 2020, I called a different supposedly Carrier dealer and this one pushed a Rheem unit. Fortunately, so far nothing has crapped out on this one but only time will tell.
L

I'm looking to replace my furnaces/ AC units for a two zone house. I had read somewhere awhile back that Lennox had proprietary firmware for their control boards and only Lennox techs can work on their equipment, much like John Deere, don't know if that's true, if it is, that's enough for me to not purchase from them.
There's only a handful of manufacturers that produce furnaces under different names, I was considering Goodman (Daiken Industries.) When a number of furnaces come from the same assembly line, are they just placing the brand name sticker on the furnace at the time that it's installed, is there really a difference, what's the consensus on the best value/quality?
G

I have two Goodman's here ( house and garage ). Since my neighbour IS my HVAC guy, I relied on his knowledge. Both furnaces fire up fast and work very well. I used to do remote energy control systems(design/build/install), so I have a good idea what to expect.
T

I've had good luck with Ducane and Goodman that I have installed in my home and reno I did. Both Hot air with Ducane having a 3 Ton A/C . Go with a highest efficiency system you can.

Tughill Tom said:
I've had good luck with Ducane and Goodman that I have installed in my home and reno I did. Both Hot air with Ducane having a 3 Ton A/C . Go with a highest efficiency system you can.
Click to expand...

I have a Goodman that crapped out at 18 months!
Warranty covered equipment (condenser leak), but "labor" charge was $800.
Total rip off!
T

fried1765 said:
I have a Goodman that crapped out at 18 months!
Warranty covered equipment (condenser leak), but "labor" charge was $800.
Total rip off!
Click to expand...

I do all mine own work, so that's a non-issue for me at least. 35 years in industrial HVAC & boiler operations.
The condenser coil leaking issue is due to the lighter materials being used to get the Higher SEER ratings on these units. Its shame the Govt did this starting in the 80's with the Protocall's that they mandated.
Reactions: 1 user
G

GreensvilleJay said:
My Goodman is heat only, AC is still the 36 yr old Clare unit....
Only 'upgraded' from 97 to 93% eff to get cheaper insurance.
Click to expand...

"Upgraded from 97 to 93% eff"
A bit difficult to understand the why of that "upgrade".
G

My 97% eff furnace , a CLARE MegaSave, new in 1986, was more than 5 years old. To get cheaper insurance from ANY other company ,needed to buy a new furnace(well less than 5 years old). Maybe it's a Canadian thing, eh ??

Yup, crazy... I'm paying MORE for natural gas BUT I save a LOT on cheaper car/house insurance. Costs me less than 80 cents a day for my truck. Hay, I don't make the rules, but I KNOW how to play their game.
Reactions: 1 user
Y

I miss the days when a brand name assured you of a certain quality. There are a few still around I’m sure, but when the decision is made to manufacture offshore the quality goes down.
Reactions: 1 user
D

Now days what ever product you purchase it's probably best to base that on ability to get service. If it isn't working it's of no use, no matter the cost of original unit!
D

Earlier this year I had new HVAC installed - A/C unit had a leak (amana) and furnace (Trane) was old (manufactured in 1984 per label). I moved into current house in 2015 and A/C unit was installed in 2013 if memory serves. I had many companies come out and quote from several of the big manufacturers (goodman, daikin, trane, rheem, lenox, carrier, amana, american standard).

I had a couple salesman question me getting more than 2-3 quotes. The highest quote I received was Lennox and the sales guy was super pushy and not listening and tried to pressure me to sign then and there and wouldn't leave any info (presentation on a tablet and not available online). I was about 10 seconds from telling him to get out of my house before he finally got that I had another company coming in a few hours after him.

I Was told goodman makes coils and other parts for many of brands and they are notorious for leaking, usually a year or two after warranty expires which fit in with what I expericed with my Amana unit with goodman coil.

I wound up going with Rheem unit, it wasn't the cheapest but was still about 13k less than the mid range lennox I was quoted. One of the reasons i chose the company I did was the sales guy was also the area technican. When the install crew showed up, the warehouse gave them the wrong a/c and the wrong thermostat - both were upgrades from what I was quoted. I got a 3T variable speed 2 stage furnace and variable speed heat pump and wifi enabled thermostat.
The sales guy/tech said they used to sell goodman but noticed the leaks and stopped selling them. They do sall the daikin minisplits though. He said they do a lot of work for rentals in the north GA mountains and that is the preferred unit many owners go with due to cost and amount of time in use.

The old system, filled with refrigerant ran basically non stop on days in upper 70s and the new system was installed just before the hotest part of summer. Even when multiple days in a row of temps in the 90s and lows in upper 70s/80s it never ran constantly.

Only time will tell how lasting the new system is, but so far it's been great. The report for the thermostat shows my A/C ran 34 hours less in aug than july.

curious, where were the ac leaks ? The actual A-coil or the fittings or ????

We're currently getting quotes on replacing the dead Rheem central air unit with either a Daikin or Mitsubishi mini-split. The first quote was fourteen thousand. We'll see how much the second and third quotes will be.
X

Be aware that every brand has issues with the coils: 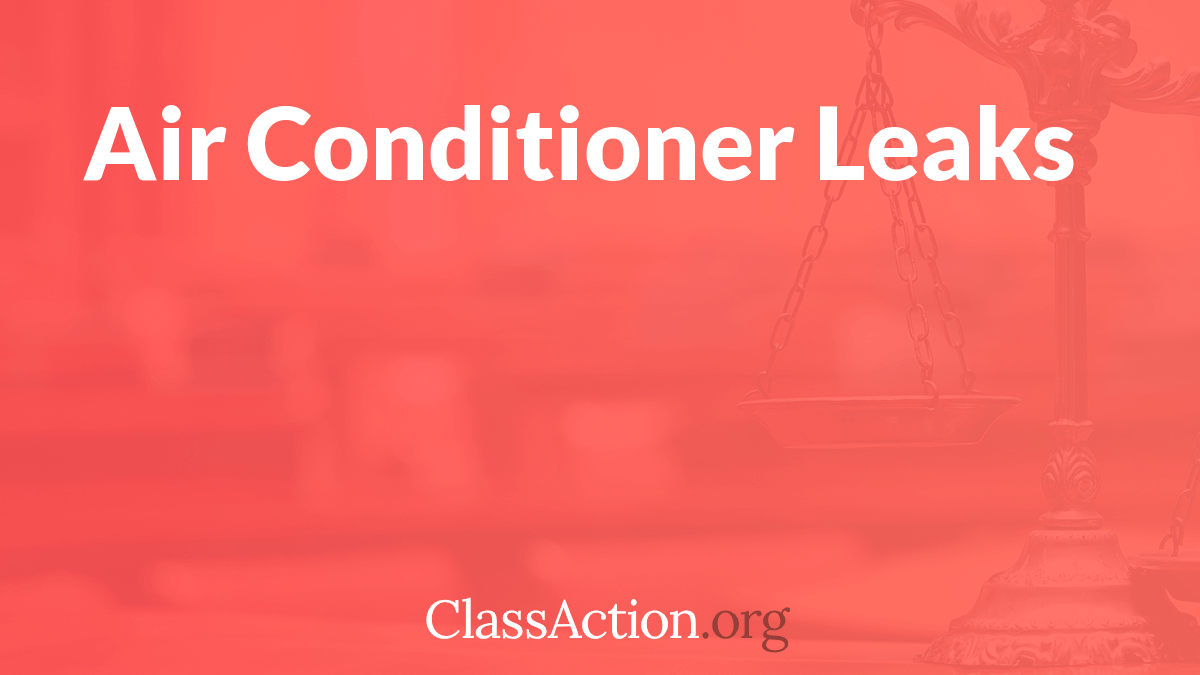 Is your air conditioner or HVAC unit leaking freon? Does it have other problems? We would like to hear from homeowners like you. Click to tell us more.

But I am having problems with everything with the Lennox. Only the compressor and the condenser coil (and maybe a control board) are still original since 2016.

The corrosion is everywhere this is a three year old Lennox coil: 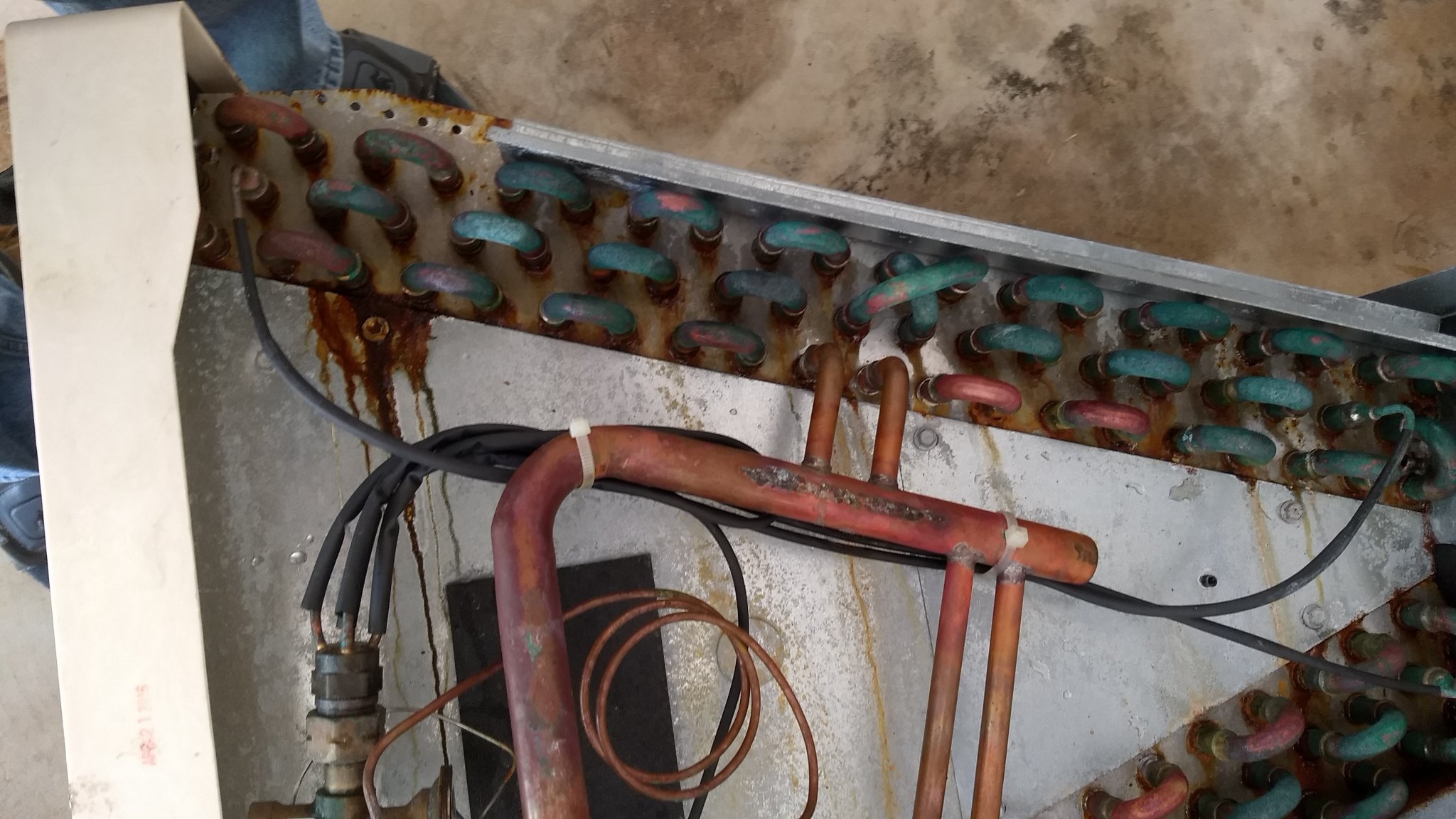 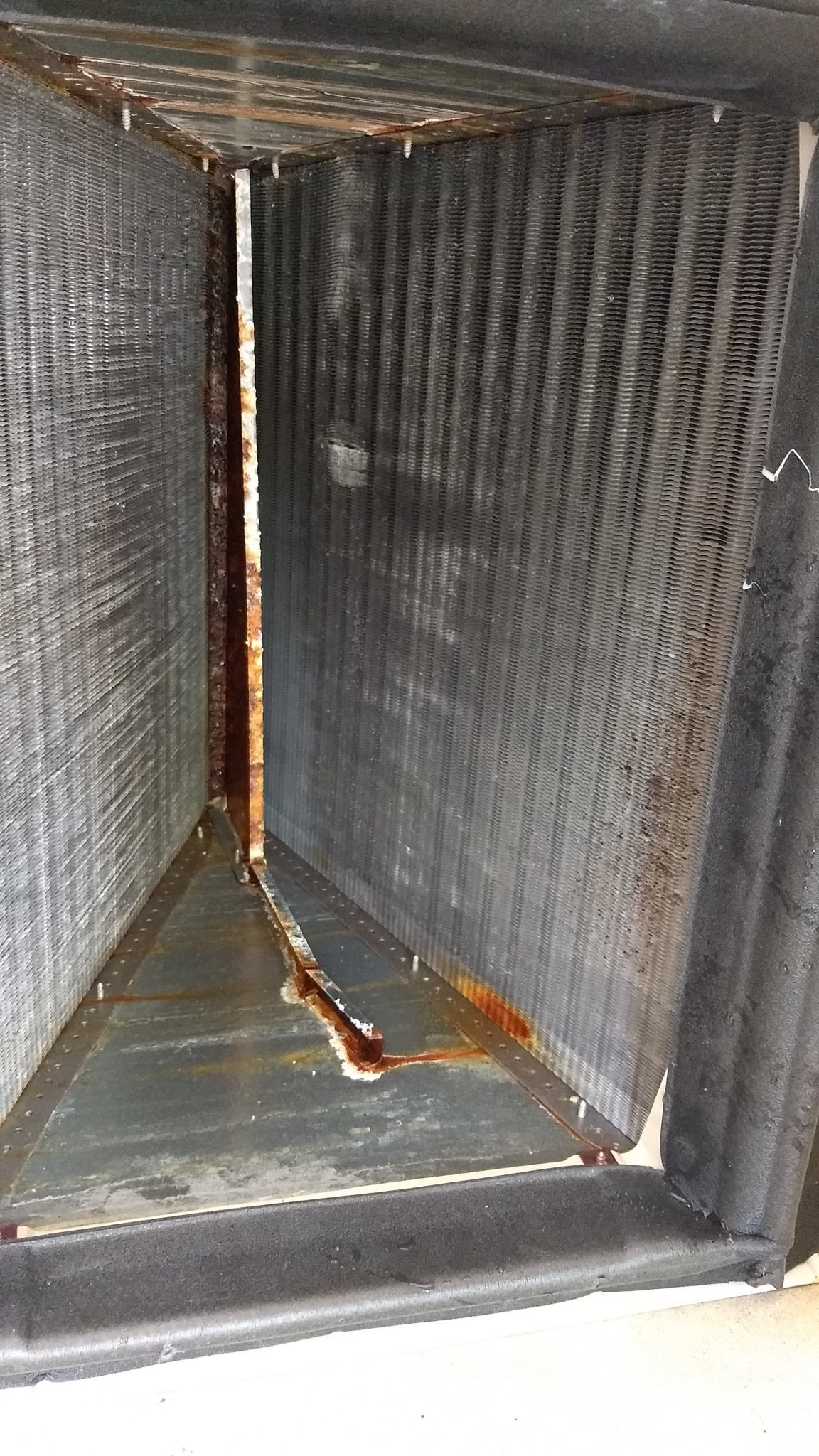 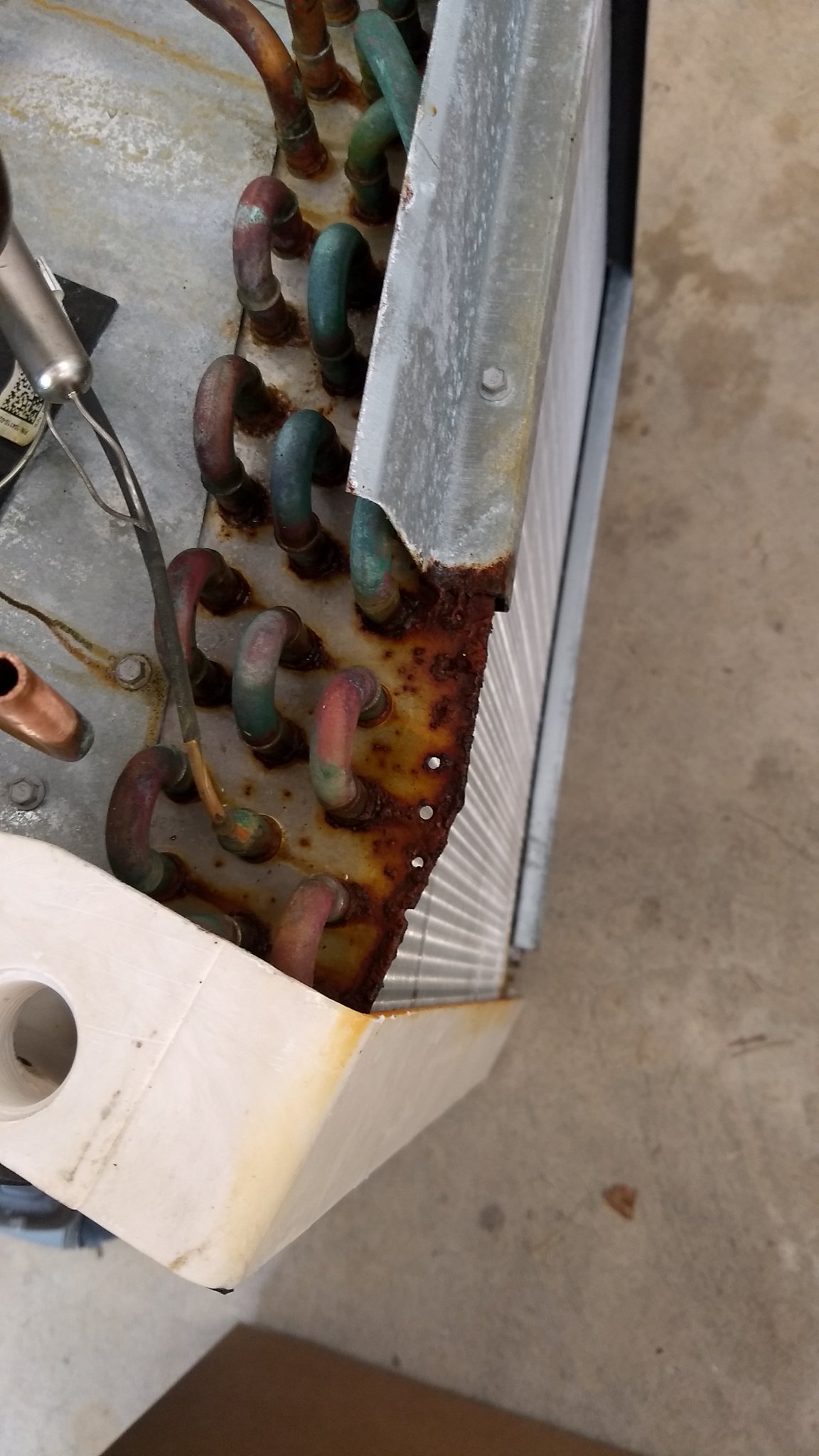 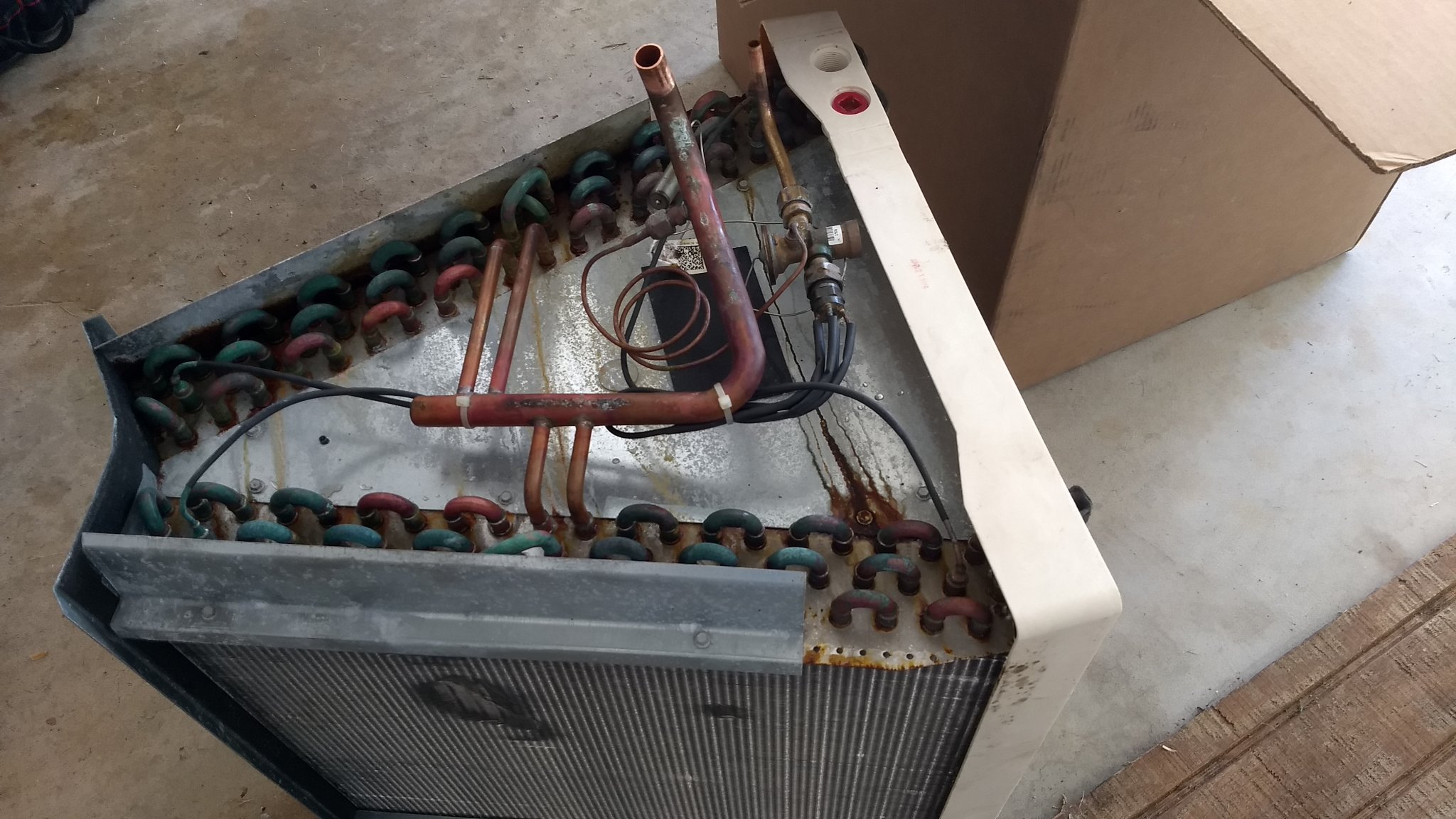 So spin the roulette, try your luck and pick a brand that is not Lennox if you need a new unit.

This is a 15 year old Bryant coil that was not leaking. 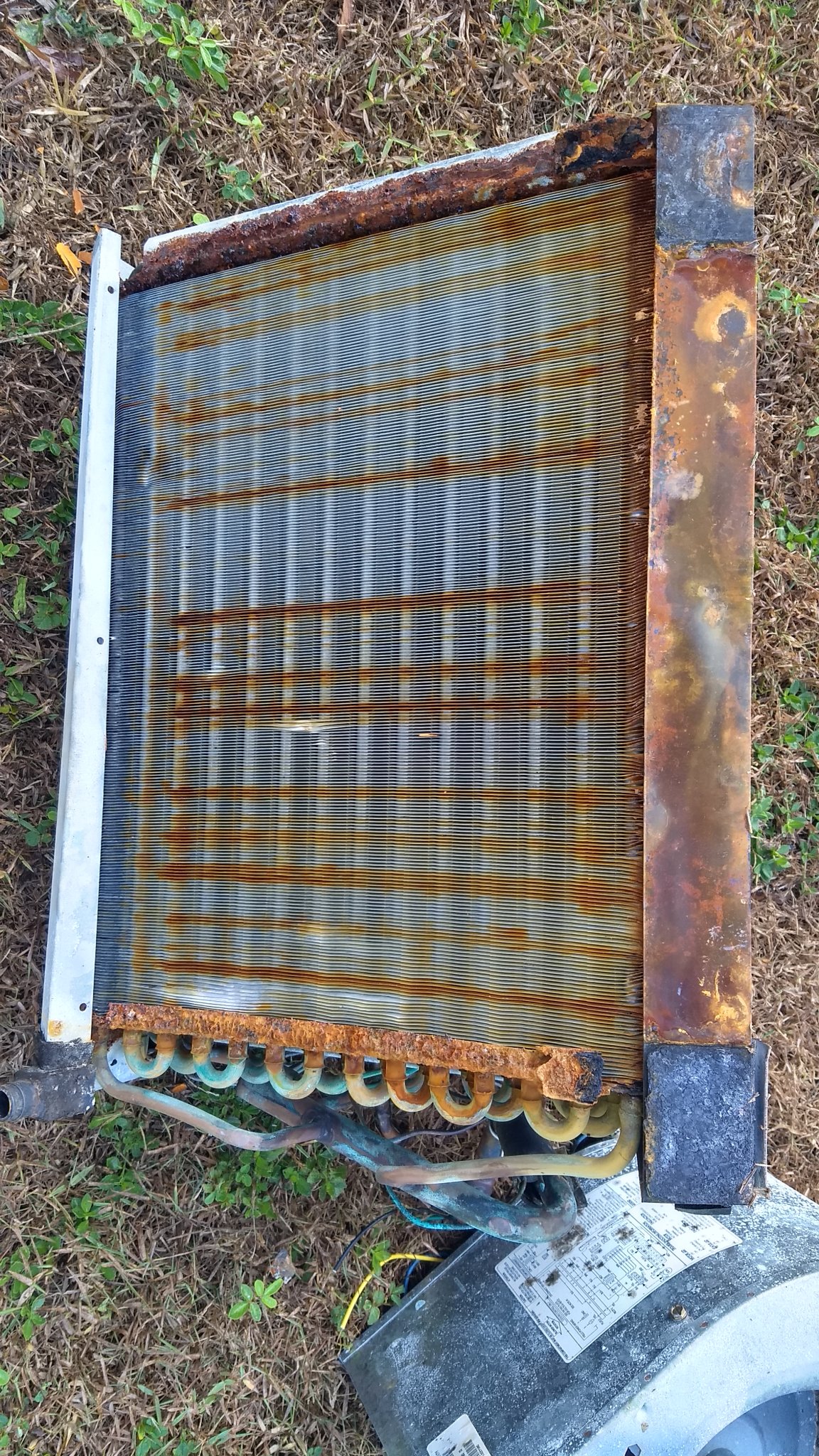