Decided to add hydraulic chute deflection to my snowblower. Starting out with wood patterns, and now that all of the geometry and dimensions are correct, I will proceed with the final metal version. I purchased a cylinder from Northern Tool which has a one inch longer stroke than the OEM Kubota version. Once everything has been tested, I will be able to measure for hoses. I plan on using my third function to control the deflection. I haven't had to use the snowblower yet this season, but it is already installed and ready to go. Hopefully I will complete this project before the blower is needed. 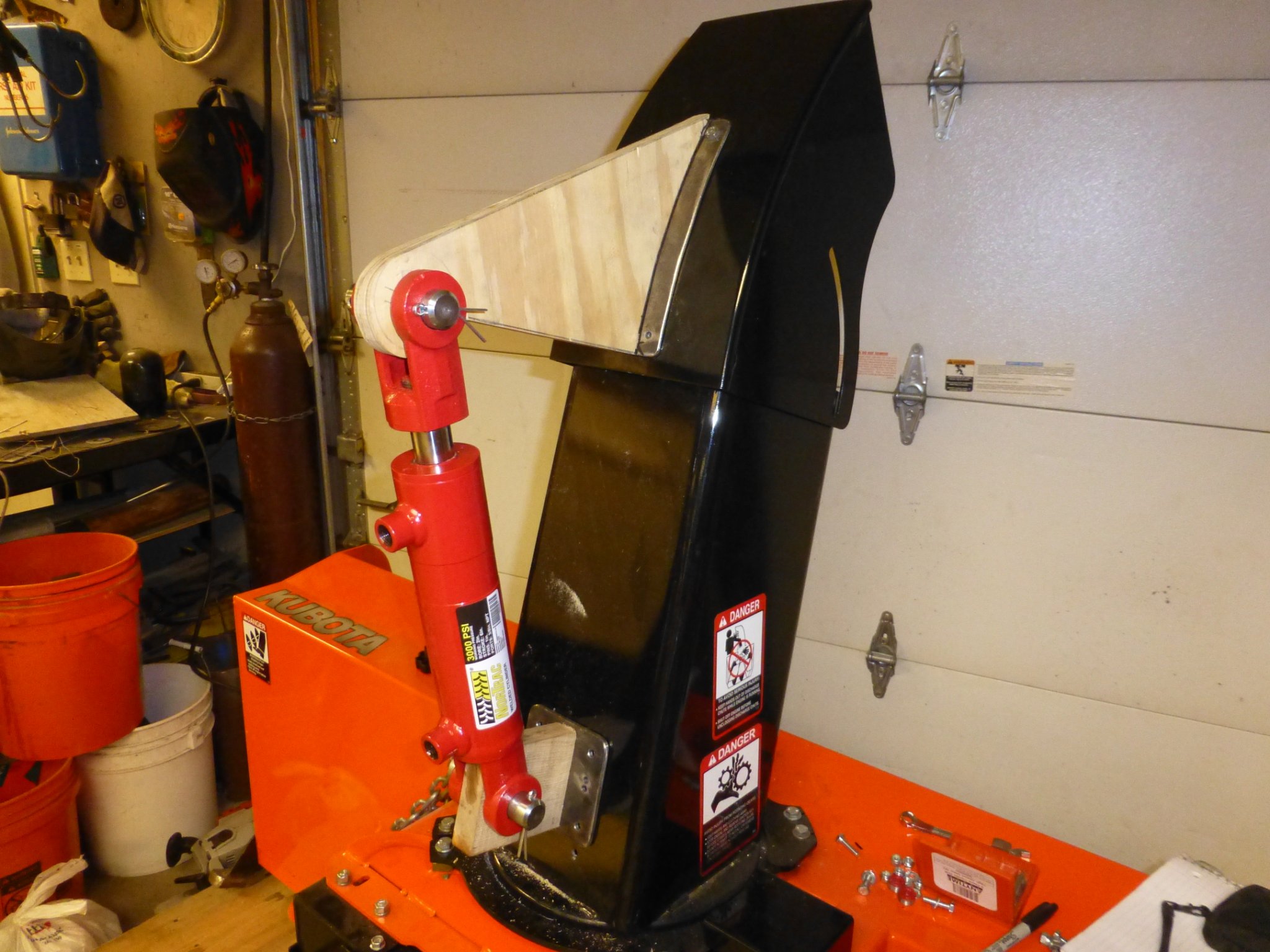 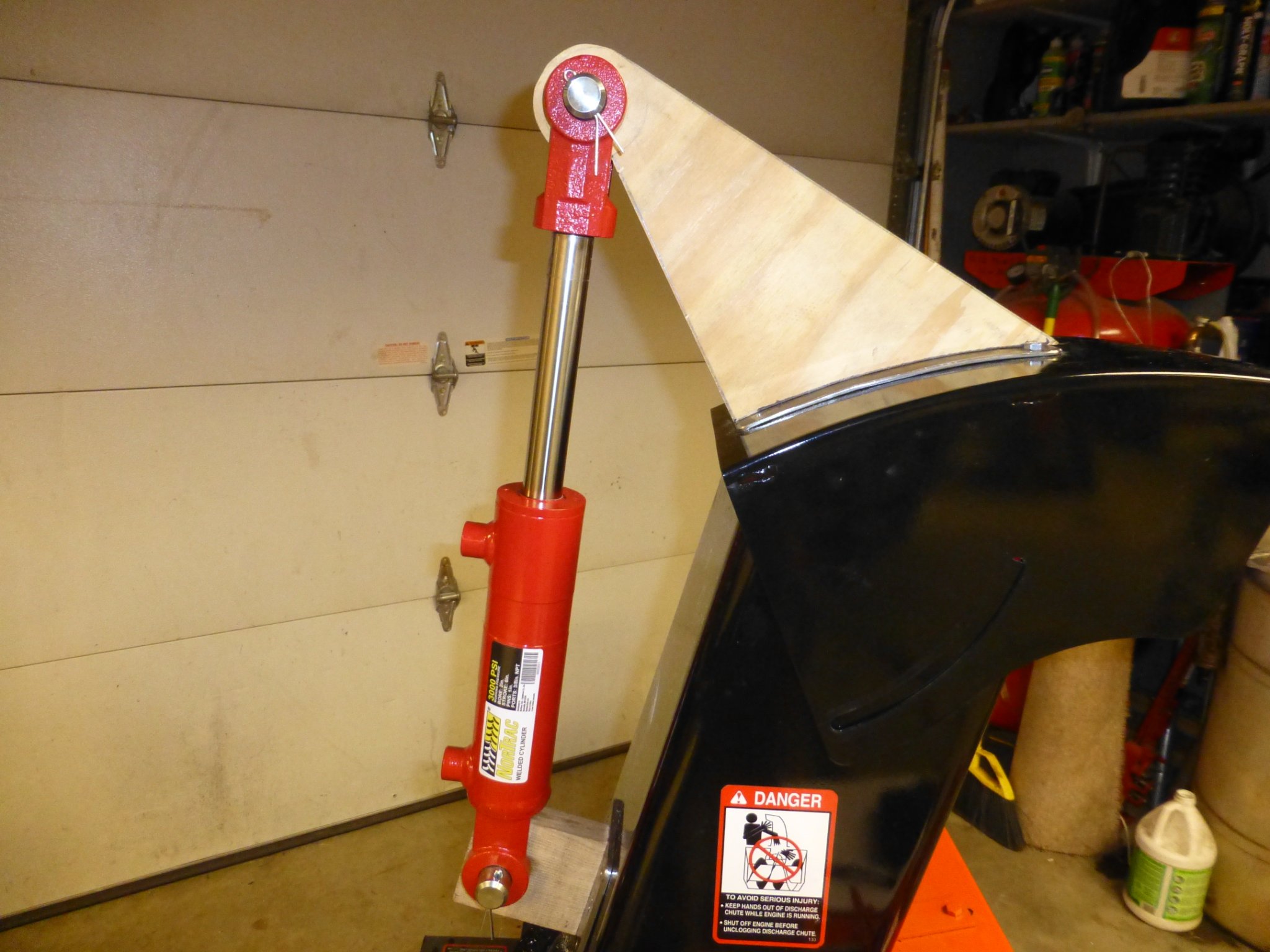 looks like it will work.
Keep us posted.
D

Looks good.
I just put the chute and rotating cables back on my JD 430 blower today. Just have to put the cover for the rotator mechanism and warning decals on yet.
I had thought about adding an electric actuator to mine to adjust the deflector. but I only clean out a few driveways and leaving it set in one position has been no problem so far. 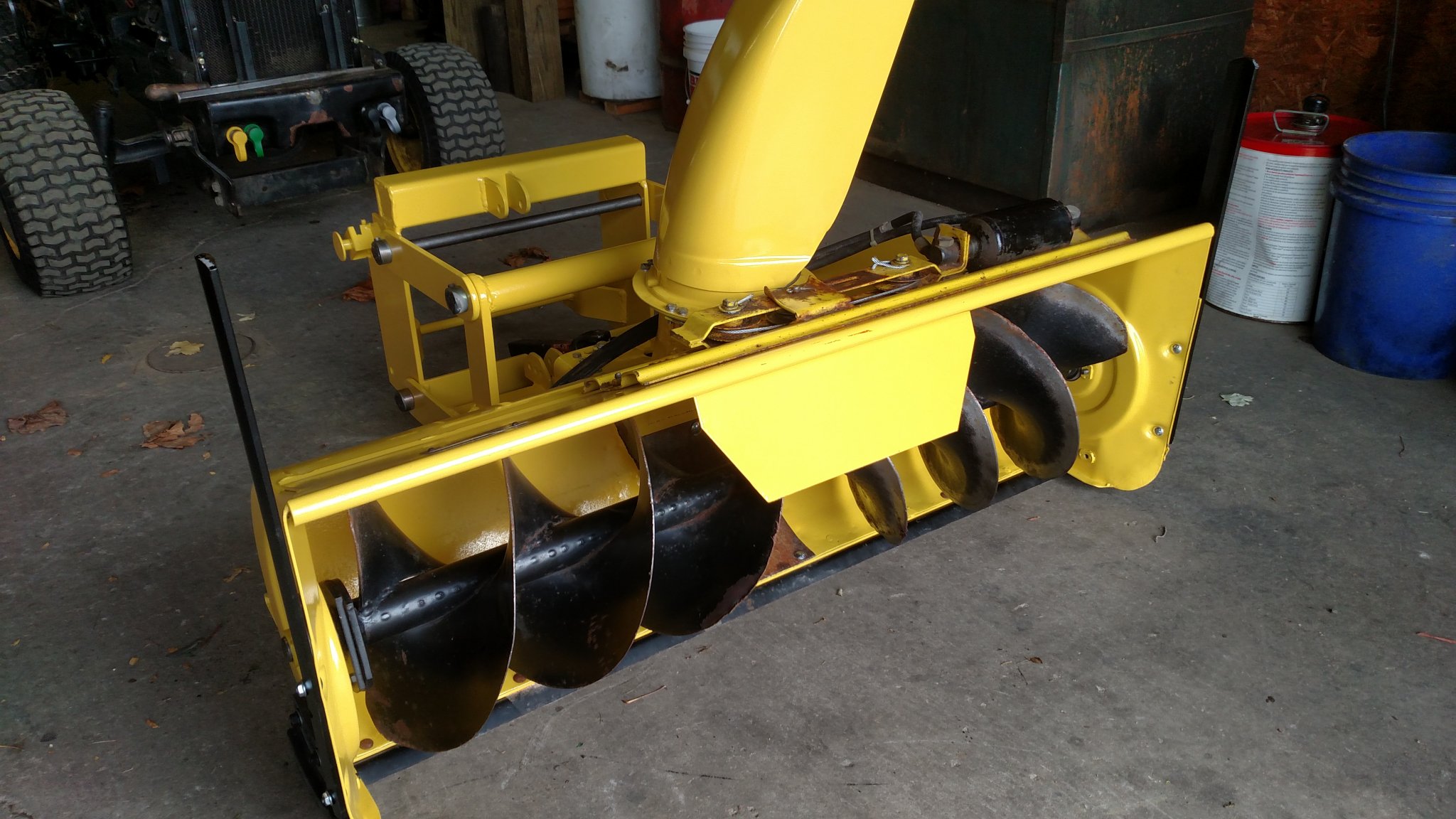 That looks to be plenty of cylinder.

You sure won't have any trouble deflecting the snow stream with that setup! Looks nice!!
Hope to get my snow blower ready for winter tomorrow.

bird dogger said:
You sure won't have any trouble deflecting the snow stream with that setup! Looks nice!!
Hope to get my snow blower ready for winter tomorrow.
Click to expand...

I know it is overkill, but wanted to have something local, and off the shelf. It was the smallest size they had. Heck, any hydraulic for deflection is overkill, but after running the blower last year, I decided that I really like staying inside my cab, and even though I would only have to get out occasionally to change the deflection, I decided that if I didn't have to get out, why not make it easy since I already had the third function.

Got the steel today, so I can start working on it, but need to call a neighbor to see if he can turn me a couple bushings for the cylinder pins to go through. If not, I will use some pipe I have, but it will be a little sloppy. More room for grease i guess.

Looking good. I did that with mine a couple years ago and it is a great feature to be able to adjust on the go.

I have been busy with getting ready for deer hunting, but managed to find some time the last few days to get my brackets welded up. Haven't had time for a final fitting on the discharge chute, but I think they turned out fine. Still have to sandblast and paint the brackets. I will also repaint the cylinder gloss black to match as well. May have to wait till after hunting to get the hoses and couplers to finish up. Had a picture of an 8 point buck on my trail camera, so will be spending some time in my stand, the first two weeks in November. Anyway here are a couple pictures of my progress. 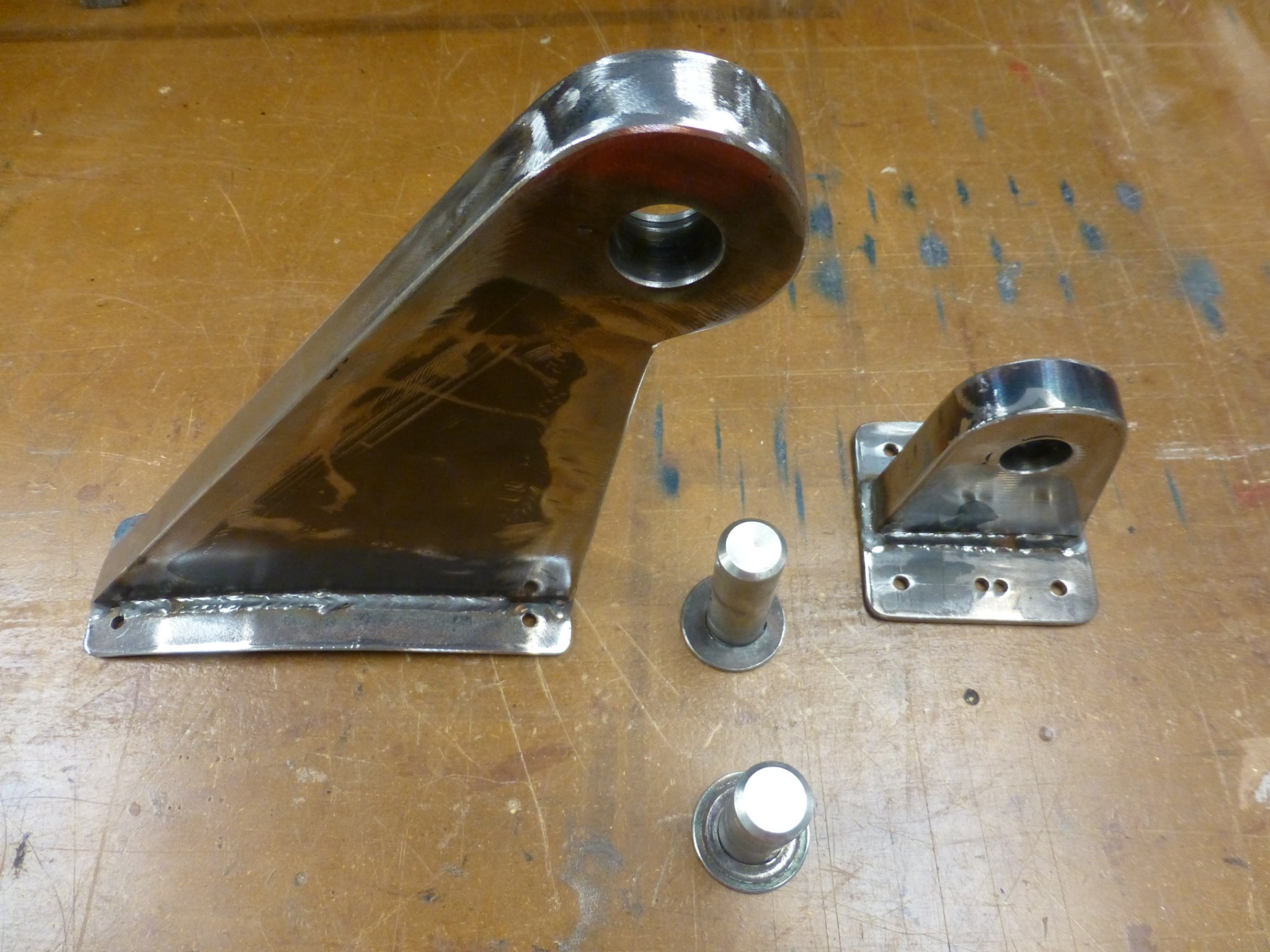 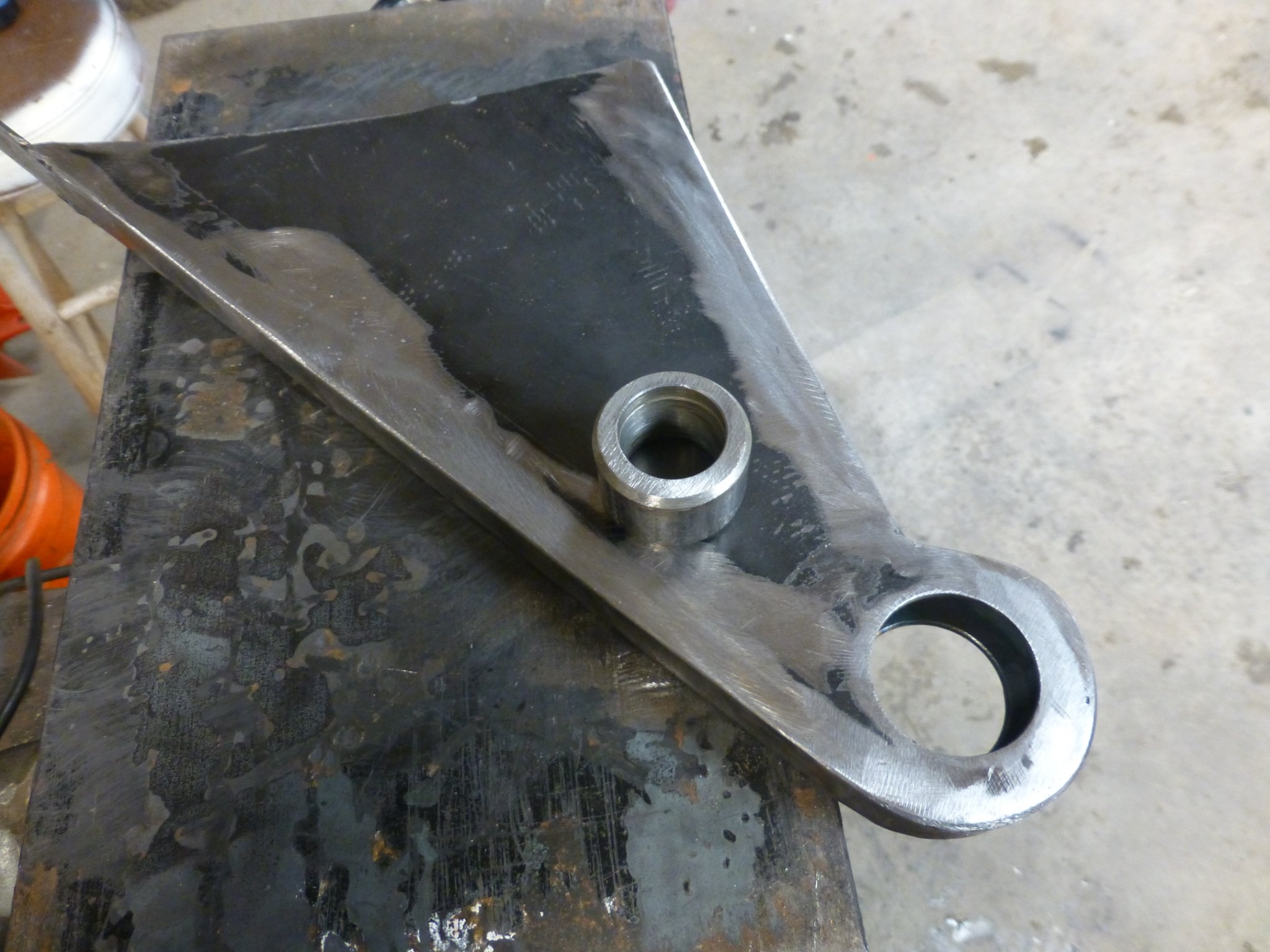 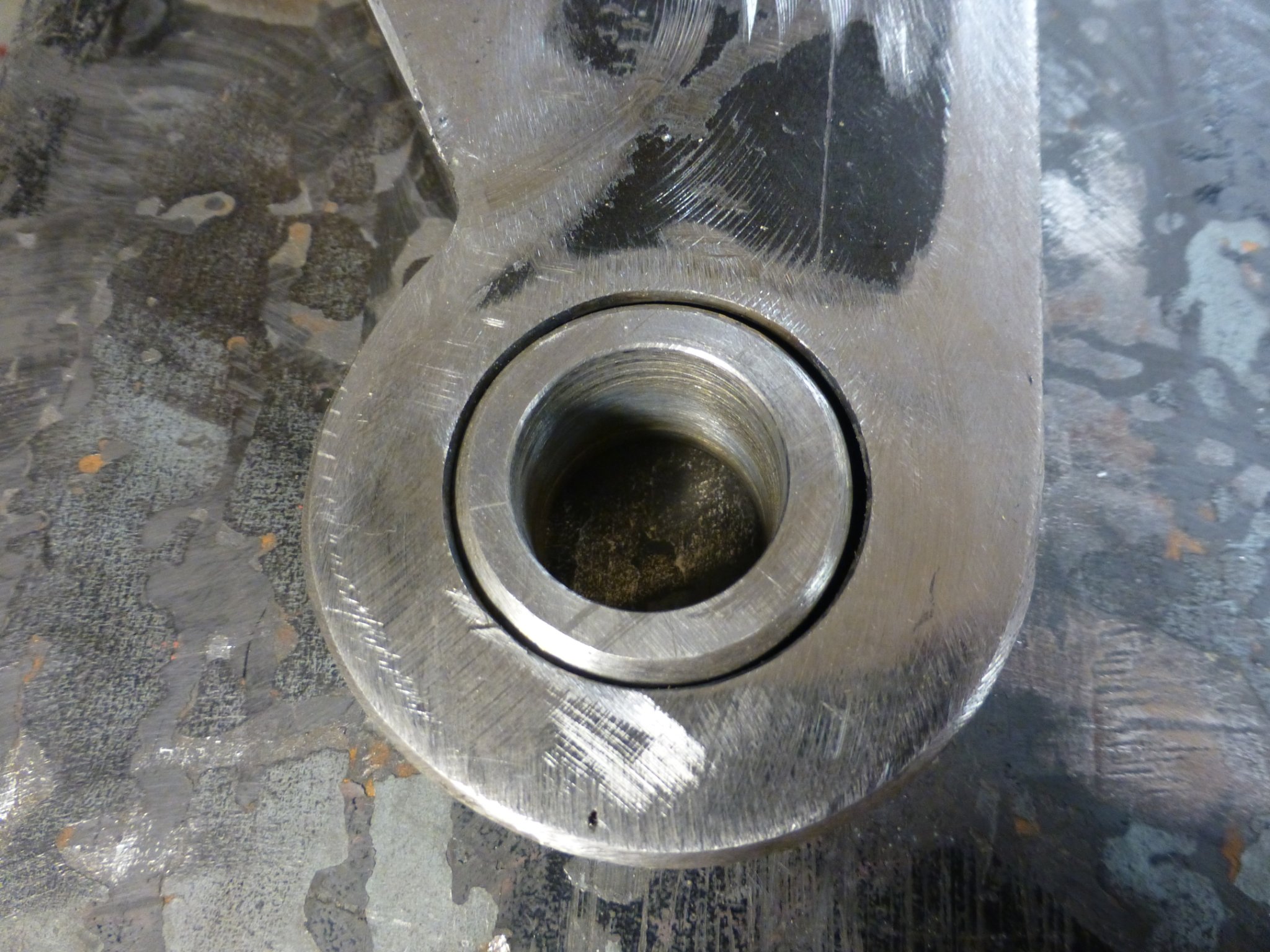 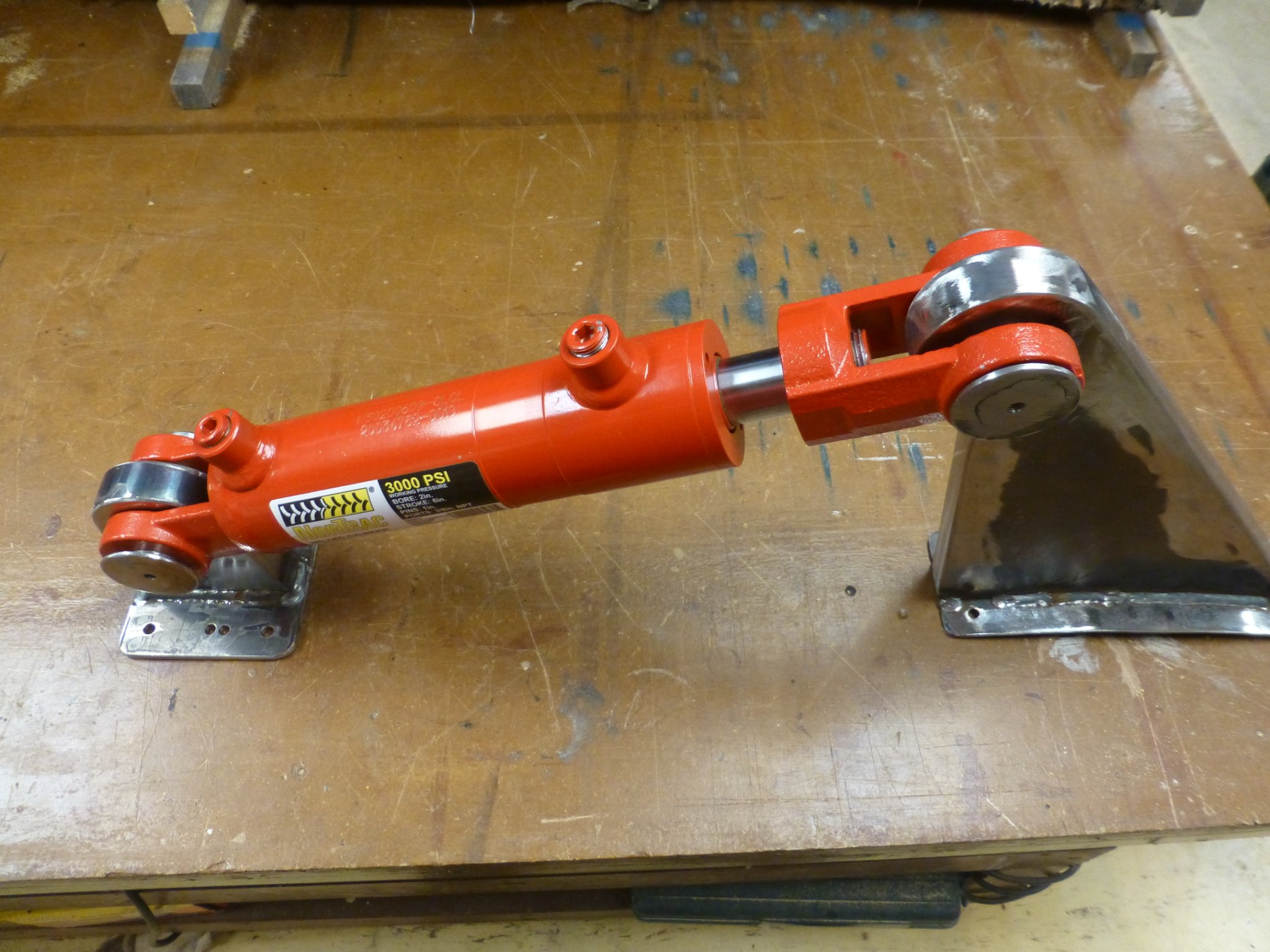 You sure that will have enough power?
Reactions: 1 user

Very nice! You’ll enjoy not having to use your wipers as much with a deflector
I made one but it’s almost embarrassing compared to yours!

nice fab work...thanks for the update.

Thunder chicken said:
Very nice! You’ll enjoy not having to use your wipers as much with a deflector
I made one but it’s almost embarrassing compared to yours!
Click to expand...

You may be right about mine being nicer than yours, but don't sell yourself short, mine does exactly what yours does, it deflects the snow, that's all. Some of my projects are done in such haste just to do one thing, and they don't always look good either. Sometimes good enough, is good enough.

So I had to go to town today for groceries, and I thought I might try to find some hose and fittings for my project. Went to Napa Auto first as I knew the could make up custom hoses, but found they did not have the necessary fitting to get connected. I was given the location of a hydraulic shop on the edge of town so I took a trip to them and found they had everything I needed to make up two custom hoses. So twenty minutes later and $200 dollars out of my wallet and I am ready to put it all together.

So I will ask the question, is $100 per 8 foot hose out of line? Not that it matters, as I have learned that tractors and their parts do not come cheap. I tried a couple off the shelf options, but found there was nothing available on hand or it would have ment additional fittings to get everything connected.
D

Well hunting ended early, took a six point buck on opening day. So now I can update some final pictures and video of my hydraulic chute deflection. I'm real happy with the way things turned out. Although it ended up costing me around $400 to get everything built and installed. I took time to drill and tap a hole in the pins holding the cylinder in place some I could add a grease zerk to keep it lubricated. Probably didn't need it but what the heck, it didn't cost me anything and I will never give it another thought about wearing it out. I also cut a rubber gasket to put between the chute and brackets so as to not rub any paint off either, so hopefully I won't get any rust between the parts. 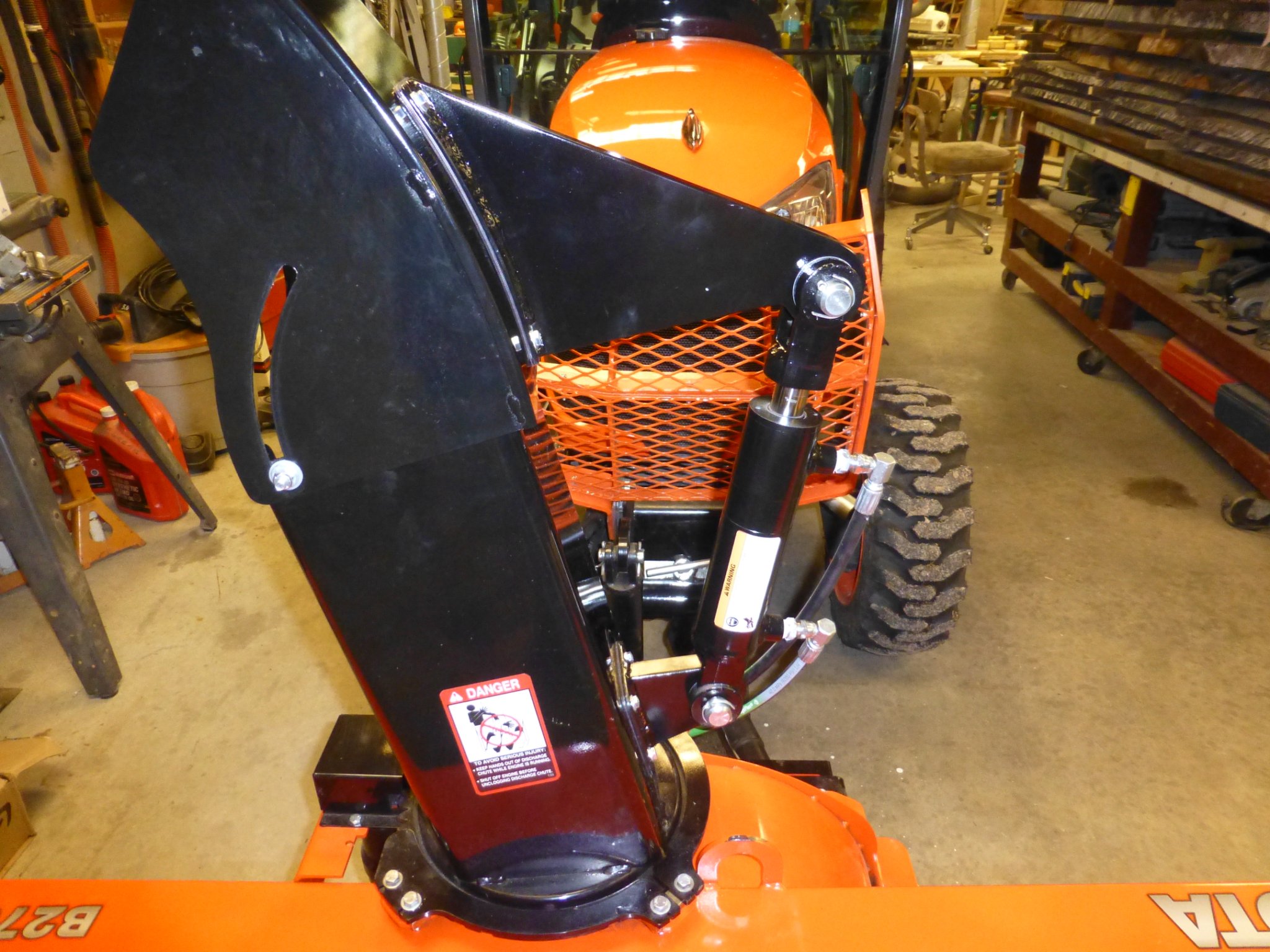 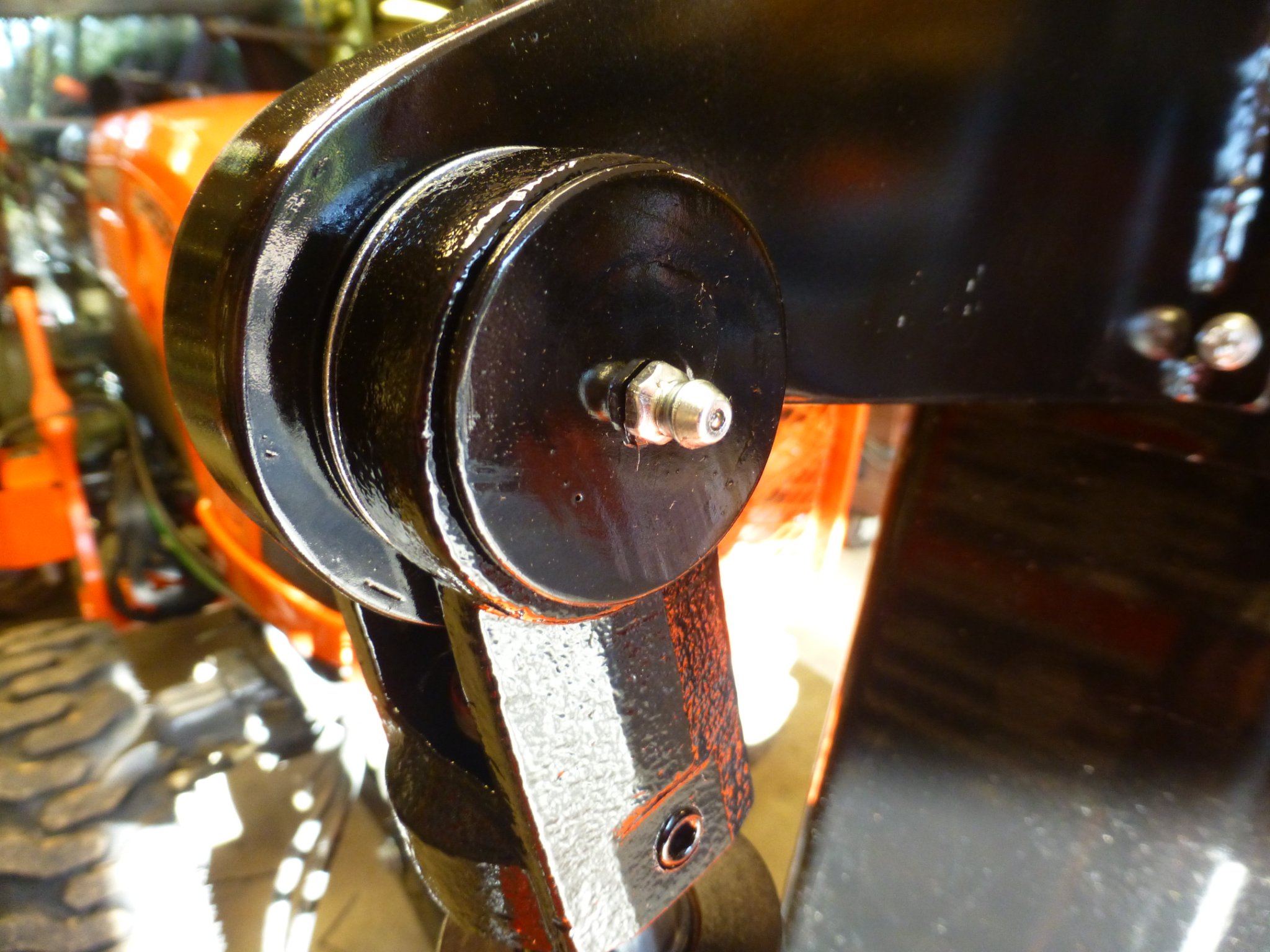 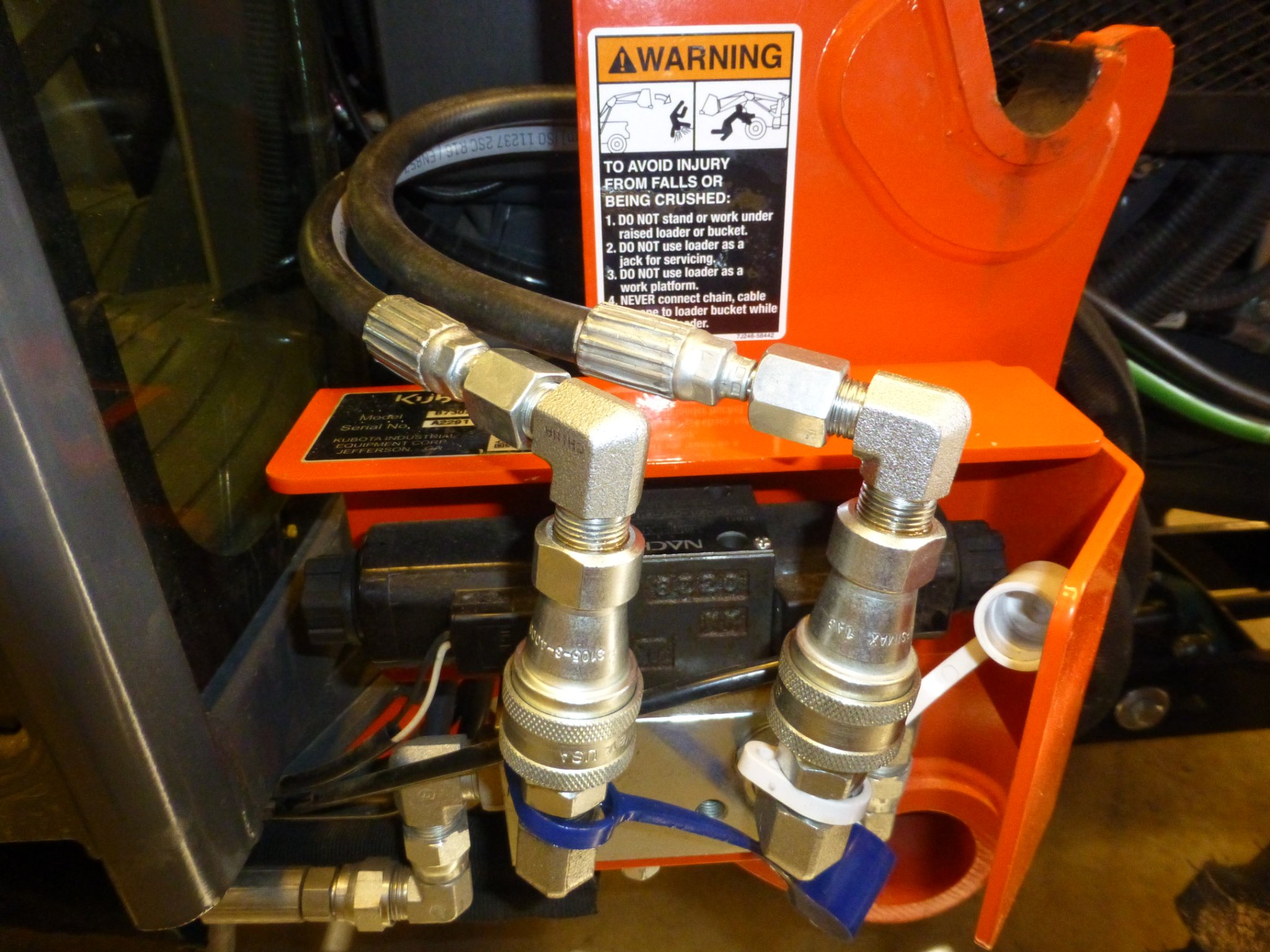 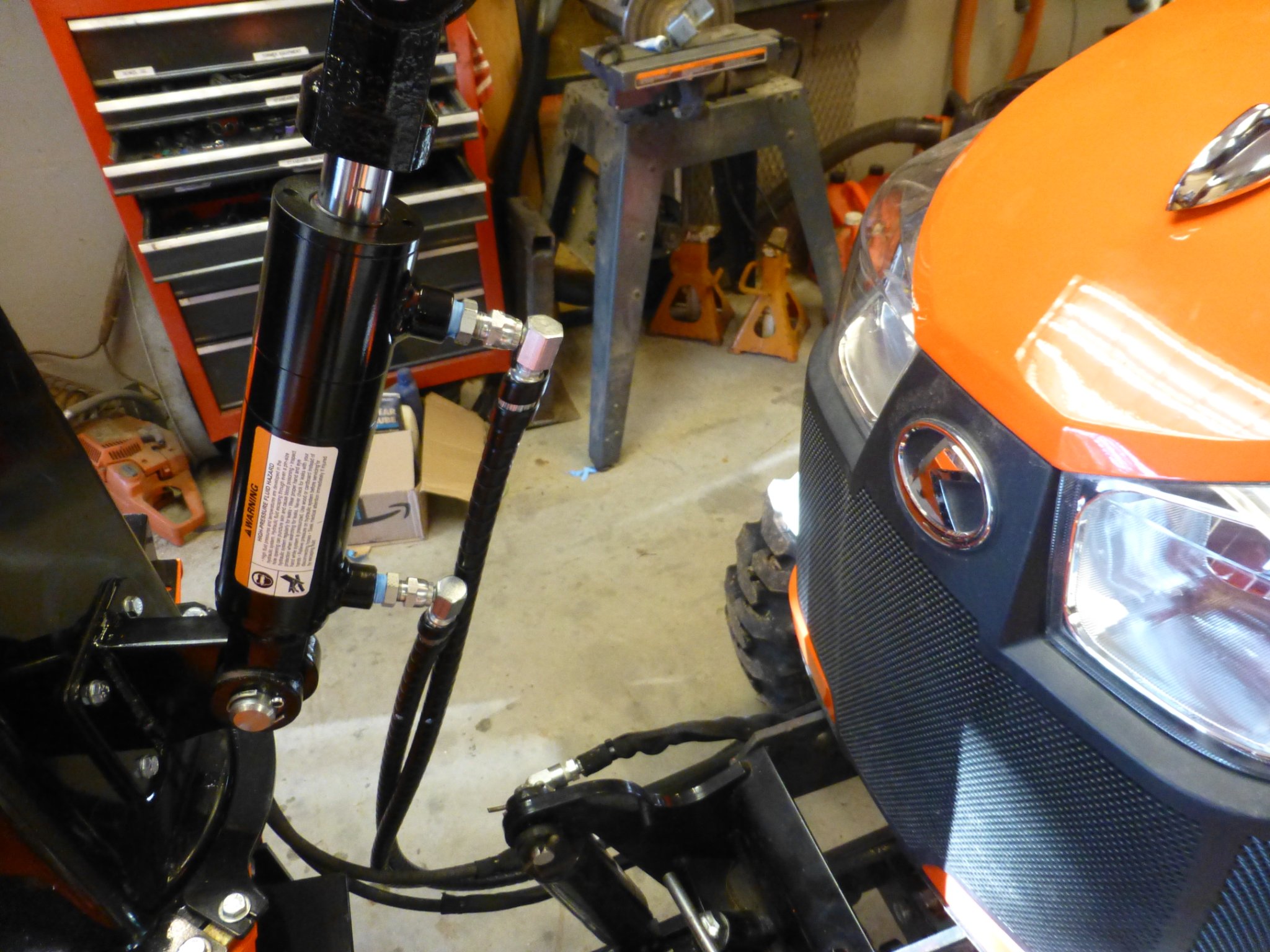 I had to take the front guard off, as I almost found out the hard way that if I lift the blower all the way up, if I rotated the chute, the hydraulic fitting would have been torn off as they would have hit the guard. I'm sure Kubotas OEM chute deflection would not have had this problem, but using off the shelf parts changed the overall size and dimensions of the finished project. It only took the removable of four bolts to remove the guard, and it is easier to open the bonnet now. Here is a short video of it working.


So now that this project is done I will be adding a LED light bar to the front of the cab, and removing the original fixtures and relocating them on the back of the cab so I get a better view in the dark. I will have to do more fabricating of some brackets to install the light bar. I am waiting for Amazon to deliver them next week so it won't be long before I get started on that. Stay tuned, I'll start a new post with pictures as I proceed with it.
Last edited: Nov 13, 2020
Reactions: 2 users

I'm a little late to the game, but $45 would buy me those, with a third of it being shipping.