I put casters on mine too. I put everything I can on casters so I can move it where I need it and sweep up around it.

Built the cylinder mount. Used cam followers and a couple 1/2” bolts clamps it in place. Plate is 3/4” but I’ll probably weld short pieces of channel to top in the center for extra peace of mind. 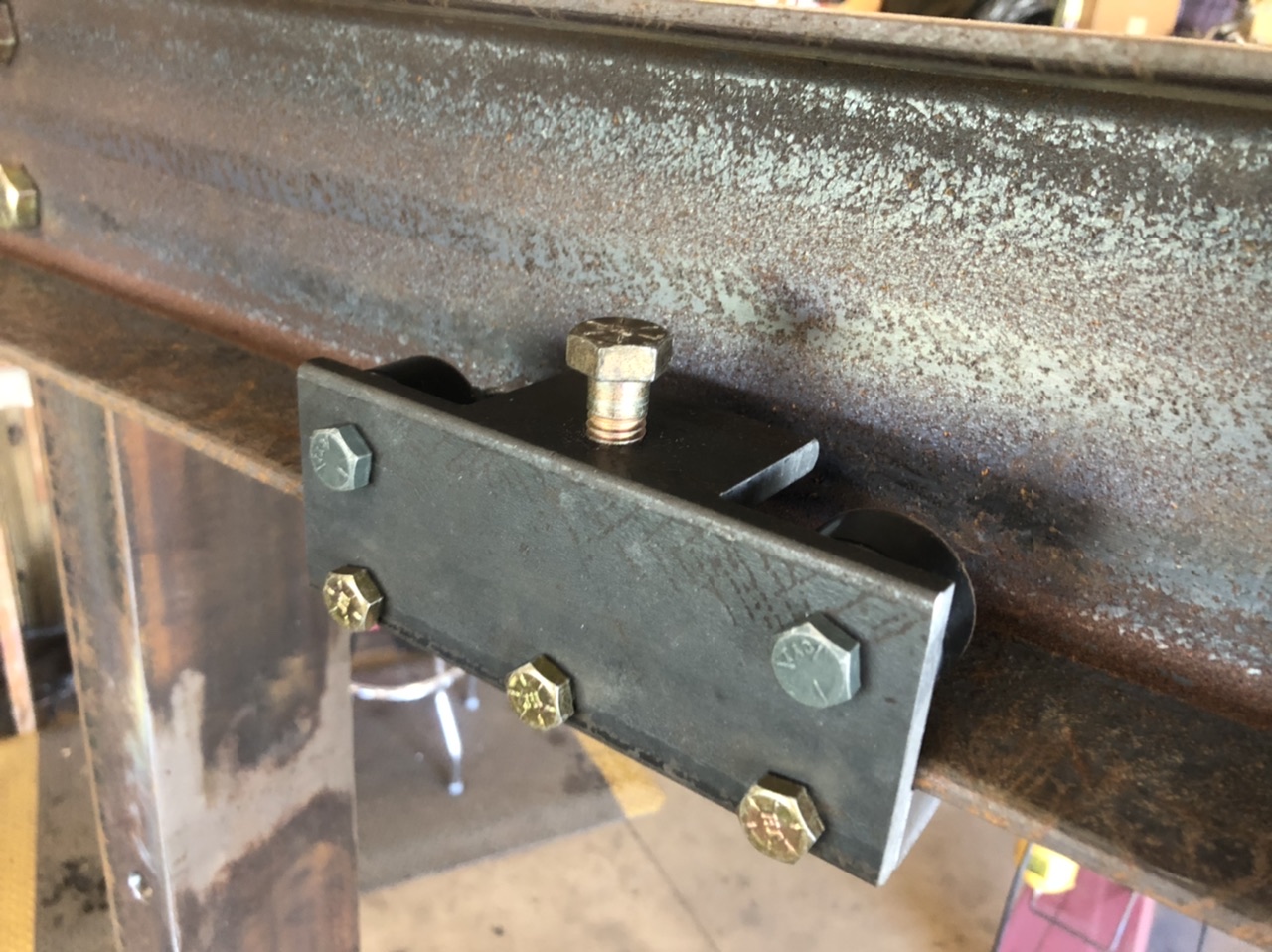 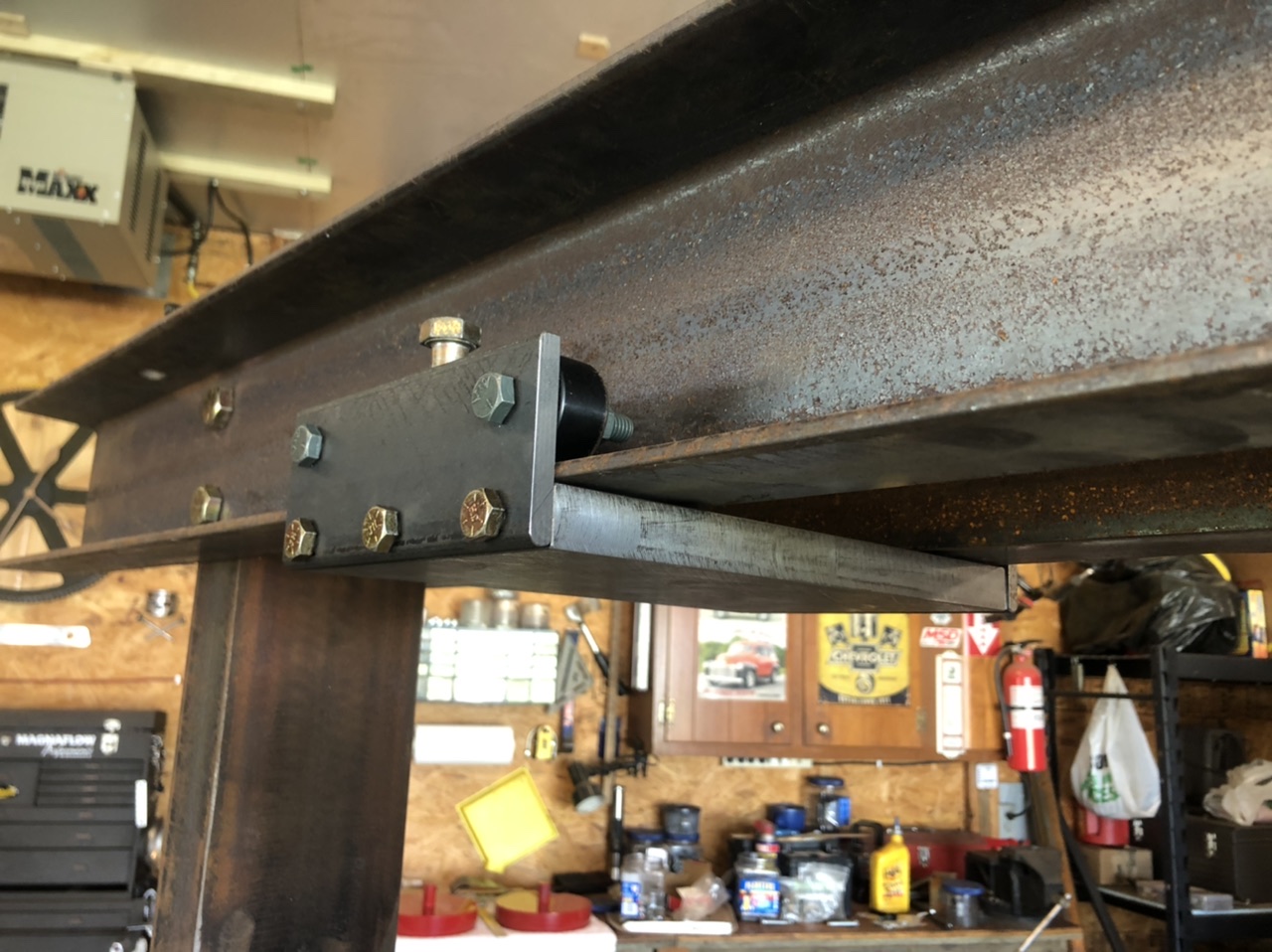 Last week, I stopped by the local hydraulic supplies shop to price an air-over-oil pump and a 20 ton press cylinder. Sales guy told me their supplier wouldn’t allow them to sell the cylinders separately, but he was very eager to price me a complete press for $3k. I don’t think the guy had a clue what he was talking about, because he kept talking about how they would have to port the cylinder differently to use a pump on it and he was pointing at a bottle jack on the shelf. He reminded me of most car salesmen I’ve dealt with, no knowledge of what they’re trying to sell you.
C

Thinking you’d want something like this for your press.

Got my cylinder today. It’s a 20 ton 4” stroke with a hollow ram. I went with the hollow ram so that I can make different pieces of tooling that will slip into the ram. Need to decide how I’m gonna attach the cylinder to the mount. 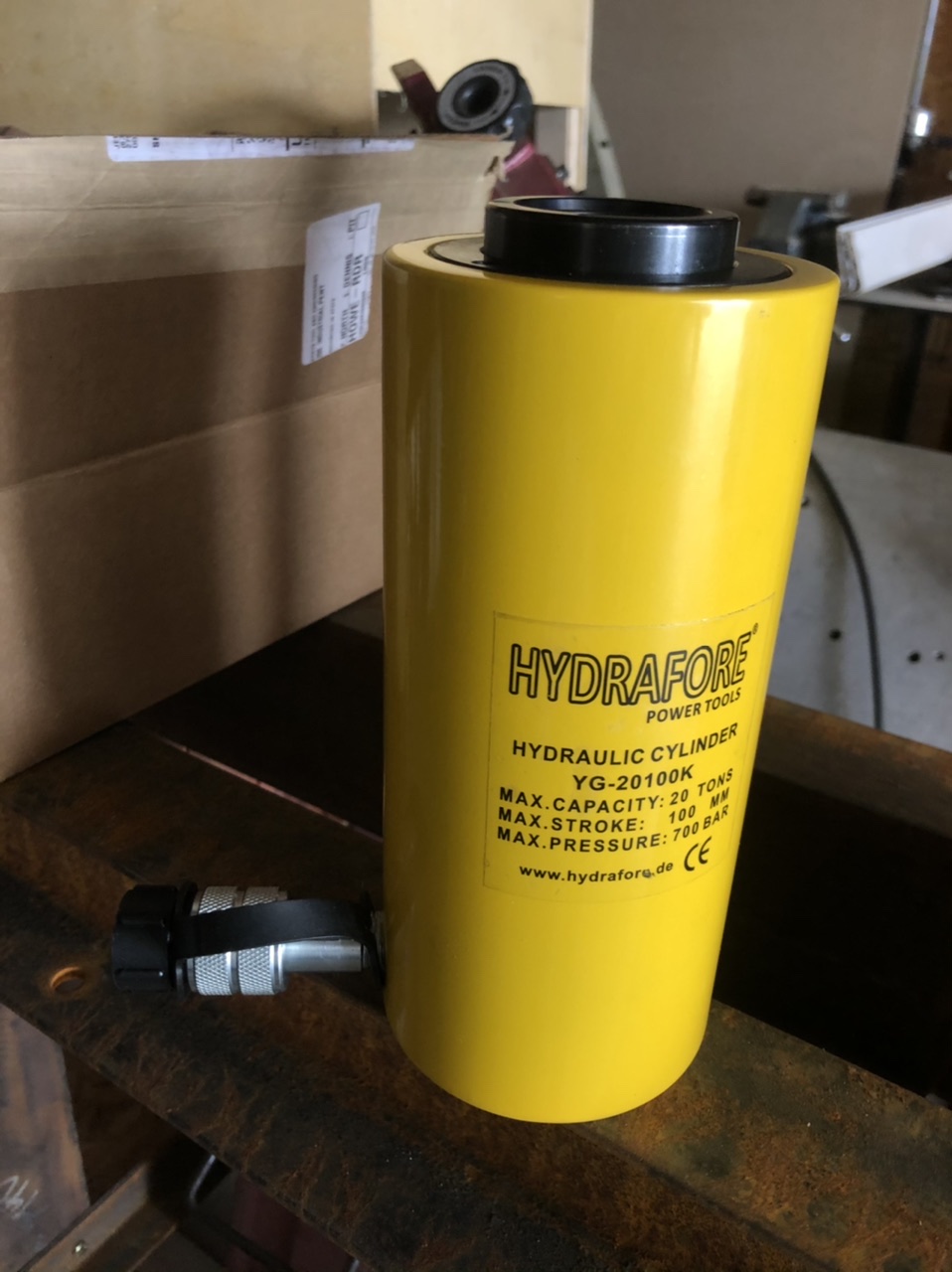 You are a master fabricator Sir, so you will figure it out. I am just enjoying the ride.
Reactions: 1 user
R

Magicman said:
You are a master fabricator Sir, so you will figure it out. I am just enjoying the ride.
Click to expand...

x2. I’m with Magic. Enjoying your progress.
B

That's looking GREAT! Will be interested in seeing how you add "retraction" for that cylinder.

bird dogger said:
That's looking GREAT! Will be interested in seeing how you add "retraction" for that cylinder.
Click to expand...

Thanks.
It’s supposed to have an internal return spring. I’ll find out for sure when the pump arrives in a couple days.
Reactions: 1 user
D

You doing a great job and using some clever design features.

The hydraulic cylinder doesn't have any tapped holes in the base?
If not, how about a short sleeve to clamp around it, with ears bolted or welded to the top plate?
Just make a slot in it to clear the pressure port.

dlsmith said:
You doing a great job and using some clever design features.

The hydraulic cylinder doesn't have any tapped holes in the base?
If not, how about a short sleeve to clamp around it, with ears bolted or welded to the top plate?
Just make a slot in it to clear the pressure port.
Click to expand...

Thank you.
No tapped holes in the base.
I had thought about a clamp collar around the cylinder body. I went the easy route and used a 1/4” plate and 3/8”-16 threaded rods to clamp the cylinder to the mount. 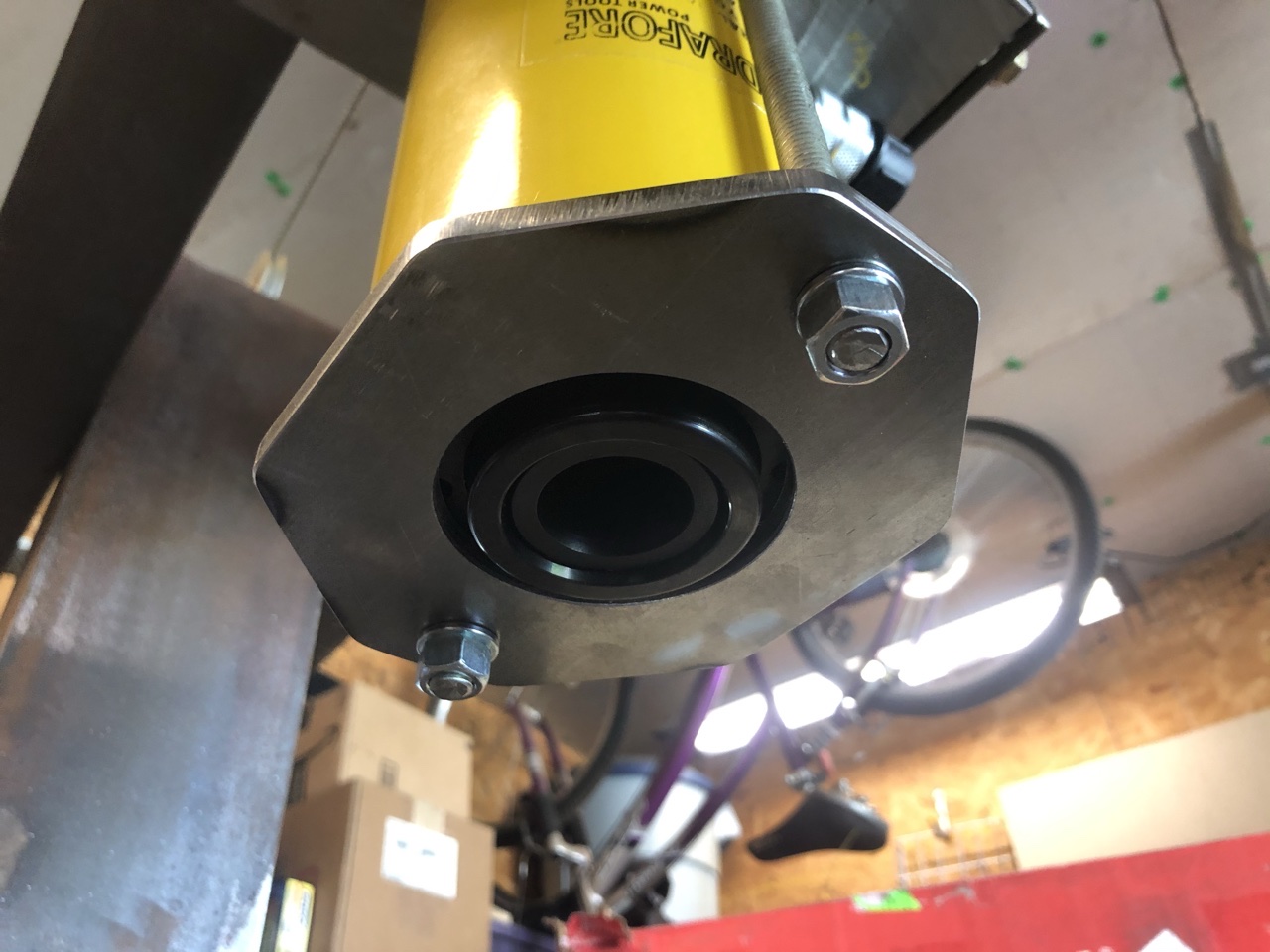 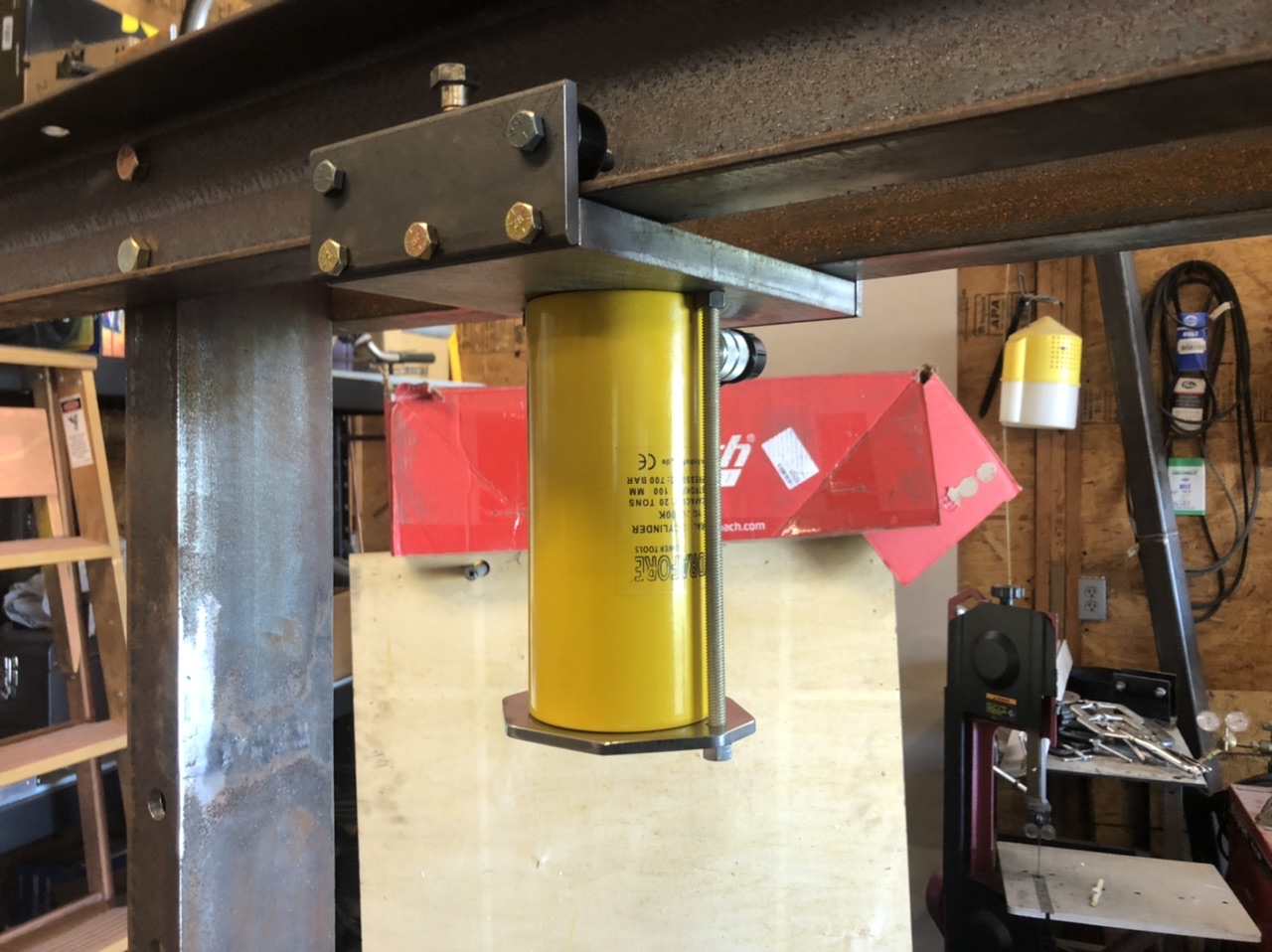 Pump showed up today as well as an 8 ft hose to replace the too-short 5 ft hose the pump came with. 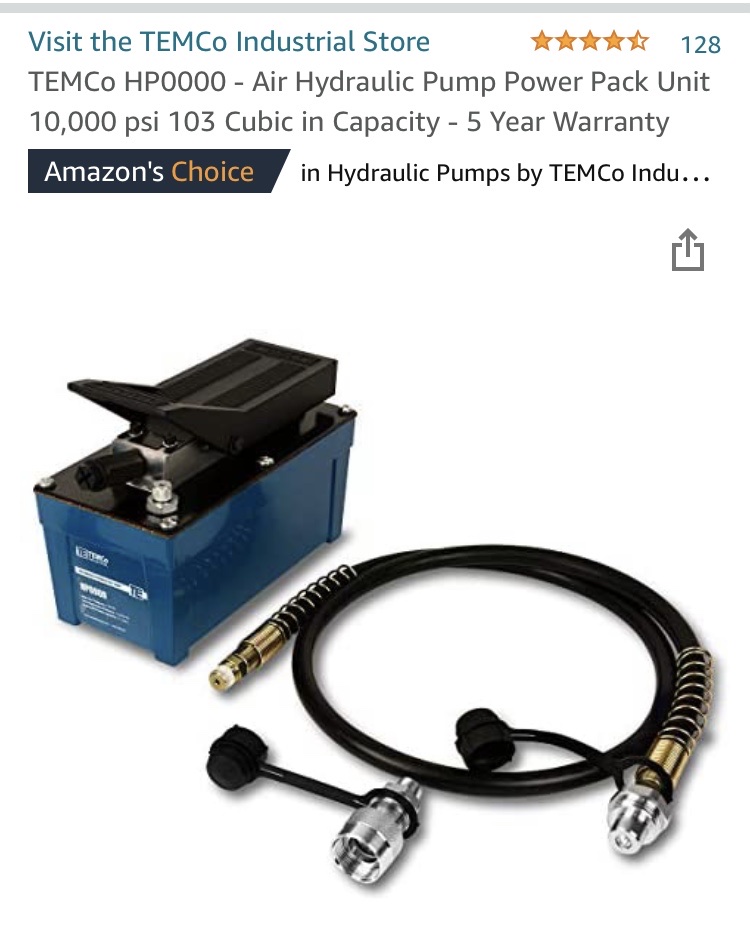 Press is functional. Had to change out the connector on the cylinder because it was a smaller size than the one on the pump hose. Luckily, the pump came with the required fitting. Sat the cylinder on the floor and the pump up on a bucket and cycled the cylinder several times to bleed the air out of the hose. Timed the cycle and it takes exactly 1 minute to travel 4” with no load on the cylinder. The cylinder is spring returned so no need to worry about the retraction. 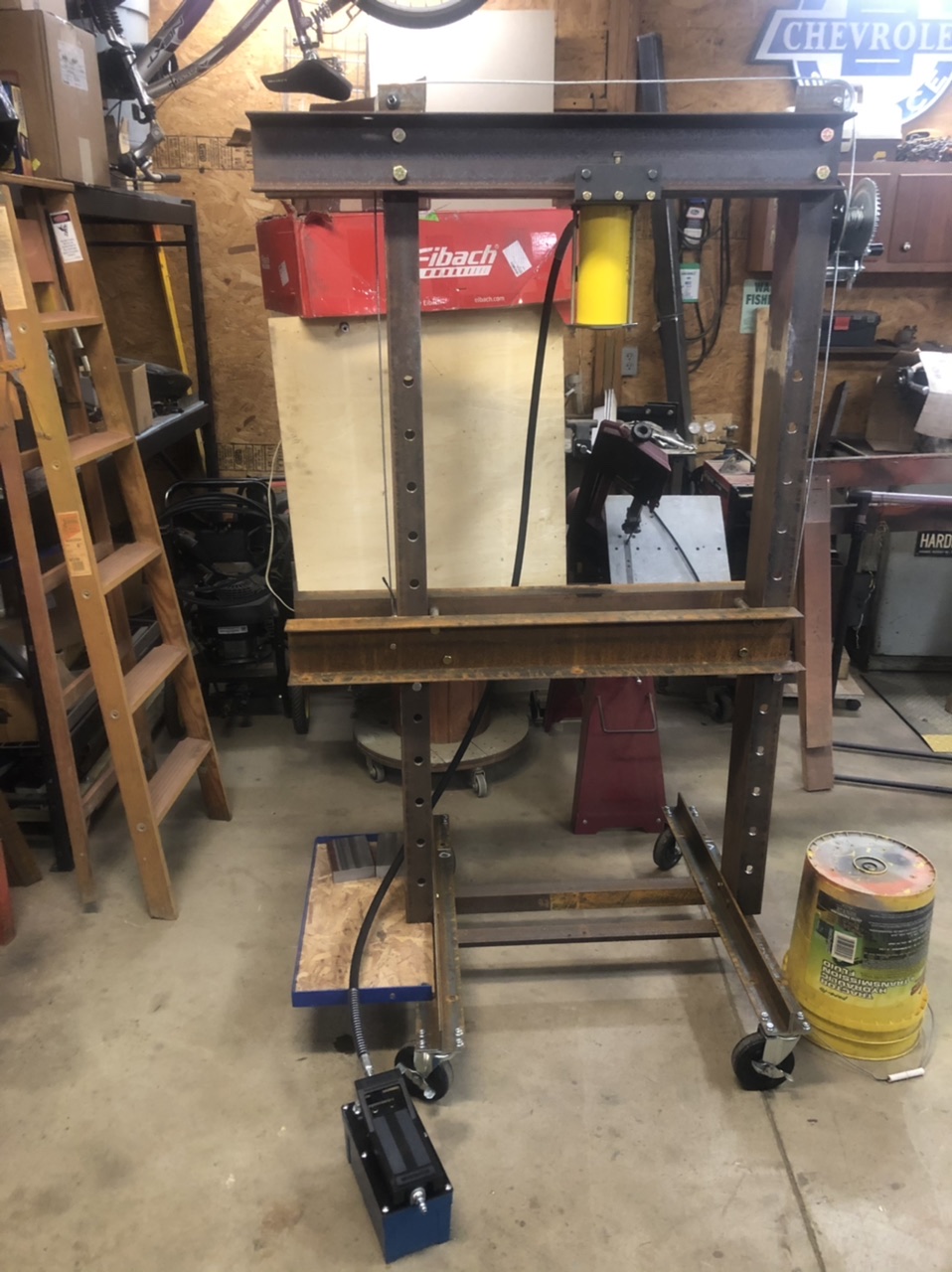 Very nicely conceived, and well executed. Looks very versatile. Now all you need is paint, and you could go into production.

Congrats on a well designed press, and thanks for taking us along. You are in a serious need for something to squeeze.

I was at a "man cave" estate sale, and saw an apparently factory made (not homebuilt) hydraulic press mounted to the wall. (concrete block wall) It was a 20 ton, top was about 7ft from the ground, bottom was maybe 2ft from the ground, and about 15" from the wall. It was about the same size, strength, & design of other similar capacity presses, but did not reach the floor. No one there could explain why, as the old boy who owned the shop had passed. Speculation was it saved floor space. (not much) Didn't think to get a pic until much later, after the sale.
Strange.

Started making some tooling. I bought a hollow ram cylinder thinking I would be able to make the tooling simply slip into the center bore with maybe an o-ring to provide a snug fit to retain the tools. Once I received the cylinder, I realized that the center bore is a sleeve that runs the length of the cylinder and it is stationary. The ram fits around the sleeve. That meant my tooling would need to be clamped around the outer diameter of the ram. I turned up a sleeve that slips over the ram and it’s held on with a couple set screws. The tooling slips into the sleeve against the end of the ram. So far, I’ve made a flat tool that’s 2” dia on one end and 1” dia on the other. I added some grooves to them for grip. My next pieces will have different smaller diameters around 2” long. A tool with a 120 deg V along with a pair of V blocks will be handy for straightening shafts. 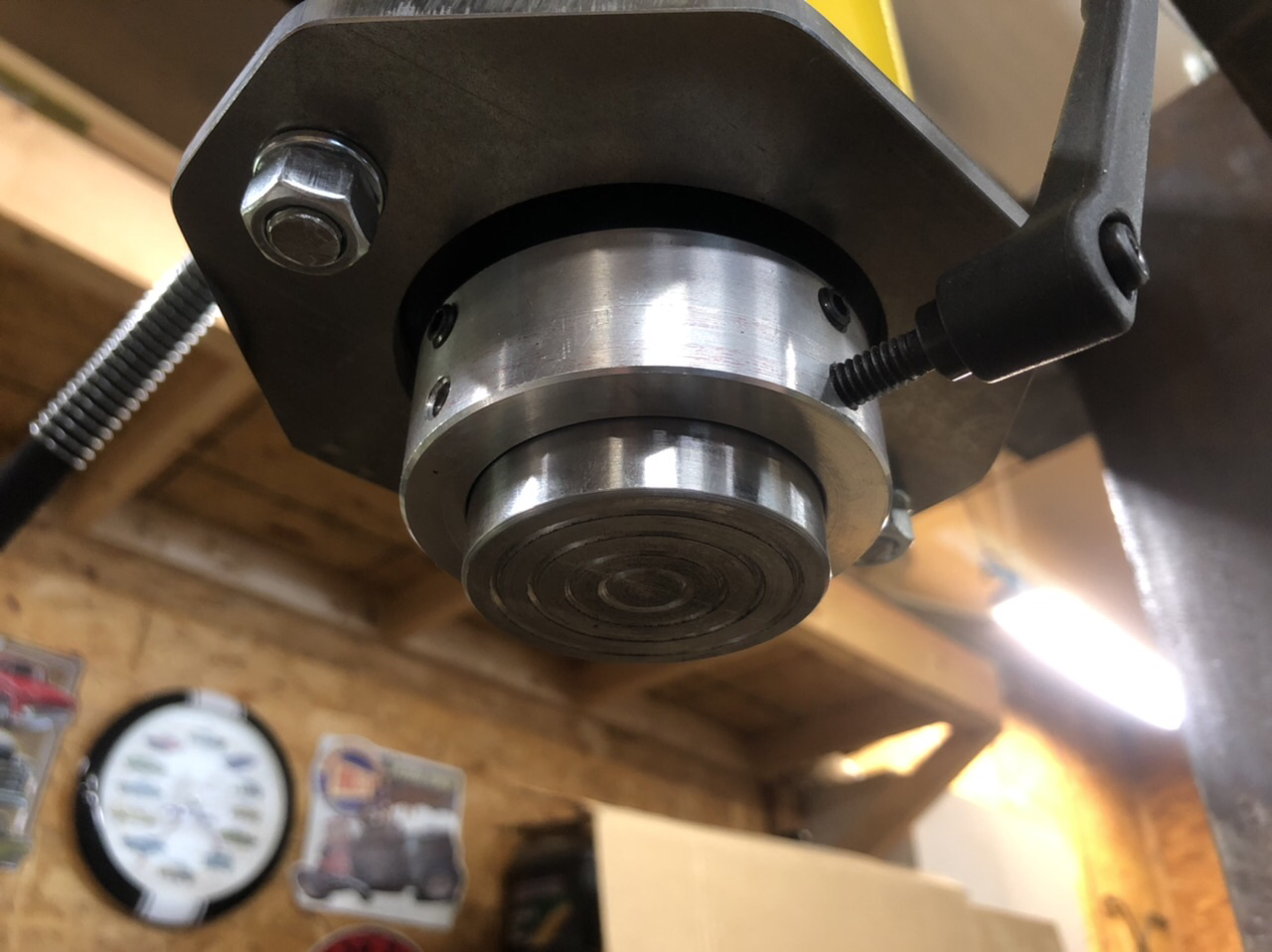 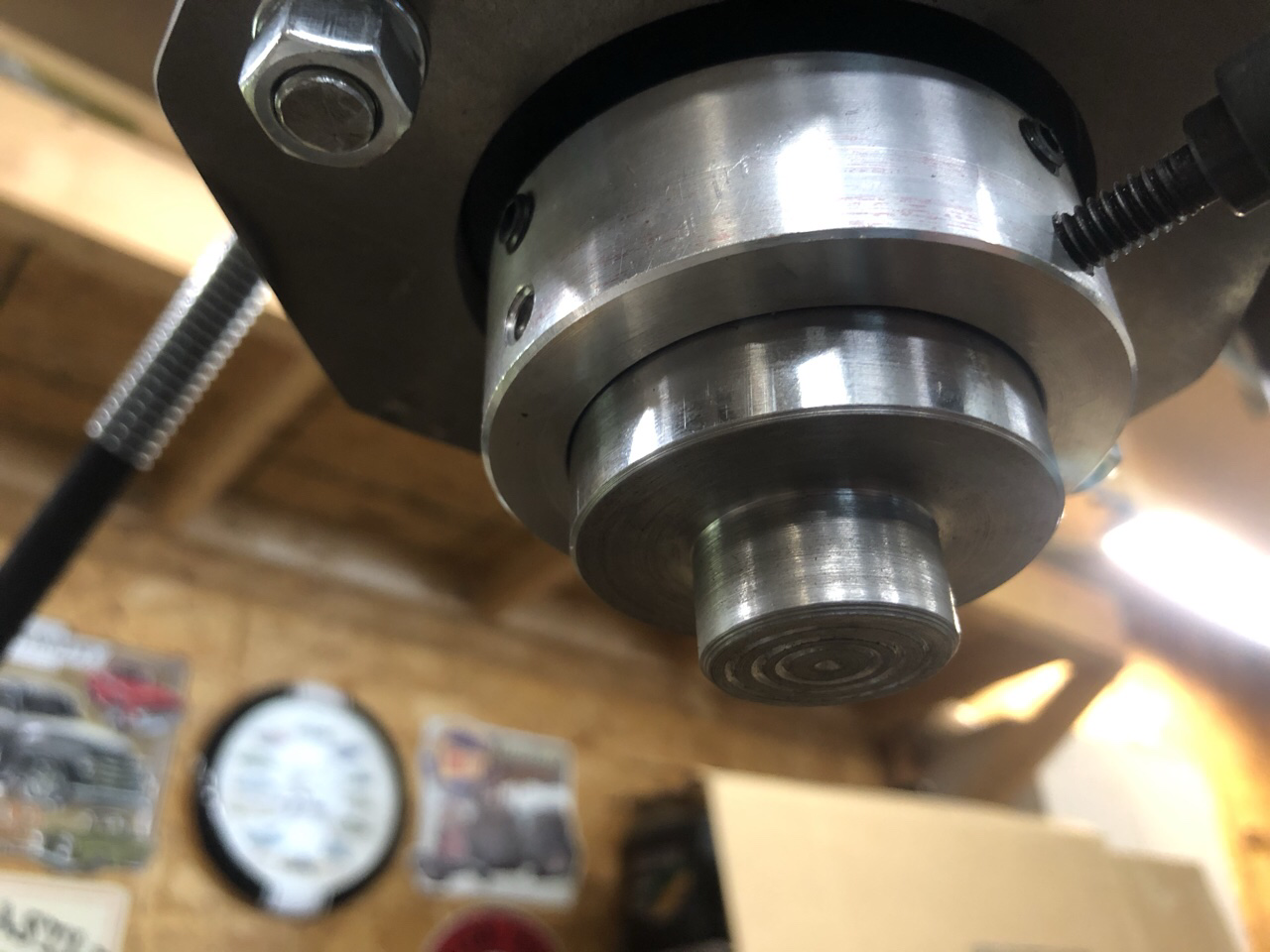