Talking bout some kind of bugs in wood. Years ago I built my wife a trestle table for the dinning room and benches. about 6 feet long. Anyway I was at LOWES and hit the scratch and dent wood pile. It was all pine and not bad so I made the table and benches from that. Now it was all planed and glued up so I was letting it set to sand it up. Now after sanding I went to the shop and some kind of white worm was wiggling up out of the wood, WTH? I pulled it out and a bit later in another spot another worm was chewing it's way out of the plank. I dont know what they were, but I know a lot of the finish I put on the table went down their holes.
R

D2Cat said:
Skeets, things are changing fast, and not for the good. Heck, I nicked the skin on my thumb the other day and went to put a bandaid on it. I could hardly get the thing out of the wrapper. Use to be a string you could pull to open the thing, now you just have to fight it, and it's not easy to get a grip on that paper!
Click to expand...

With the new packaging on those things, you can bleed out before you can get one opened!

skeets said:
I went to the shop and some kind of white worm was wiggling up out of the wood, WTH? I pulled it out and a bit later in another spot another worm was chewing it's way out of the plank.
Click to expand...

Since it was Pine and they were leaving, they were Ambrosia Beetles.

Well Bud they were leaving but didnt get to far

A bit of sawing for a Grandson's Senior Class Party this afternoon. 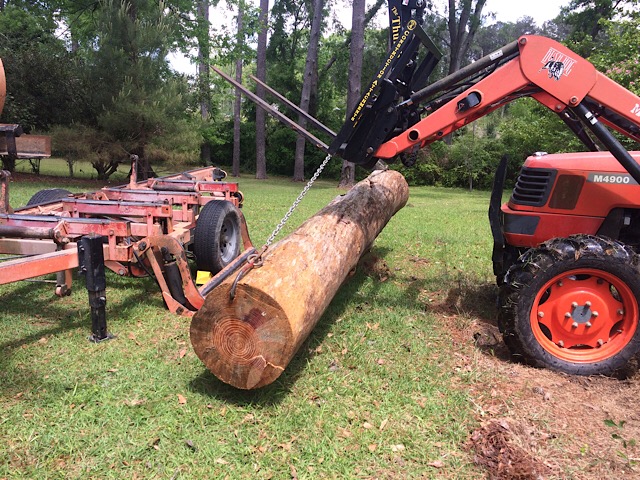 Started out with a couple of Pine logs. 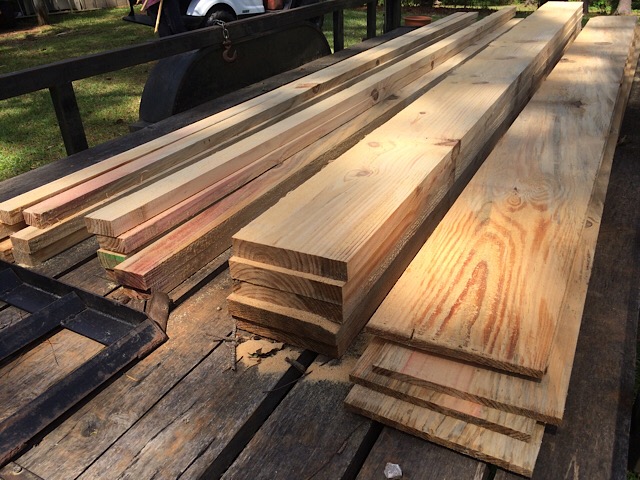 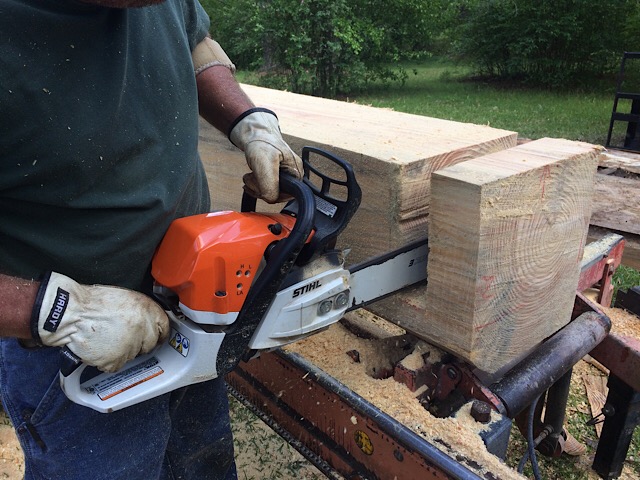 We sawed the top and both sides off of the second log and then notched down for the sawmill blade, 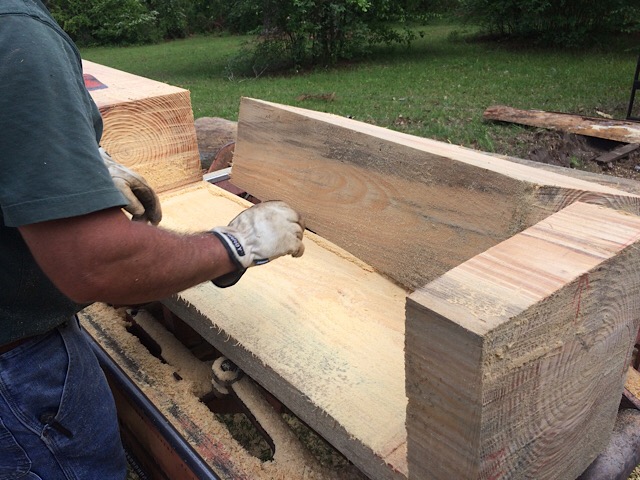 And then sawed it out. 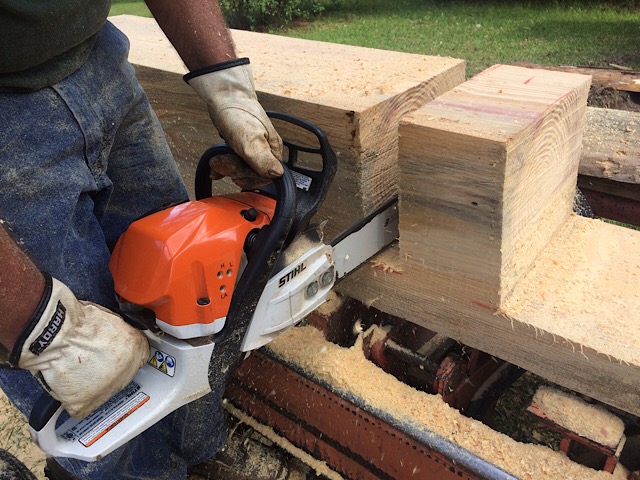 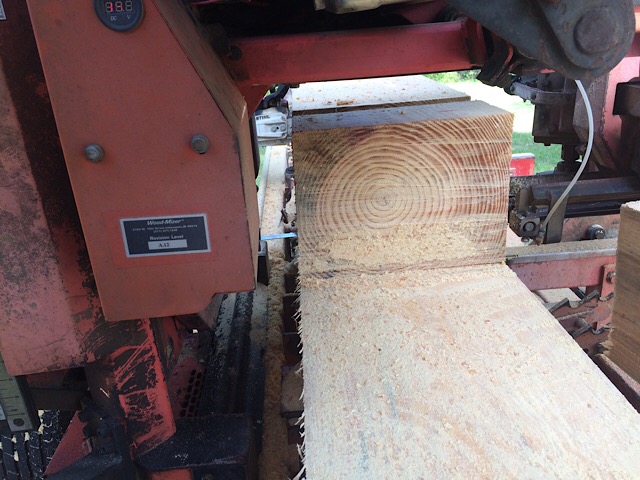 Ready to make the second cut. 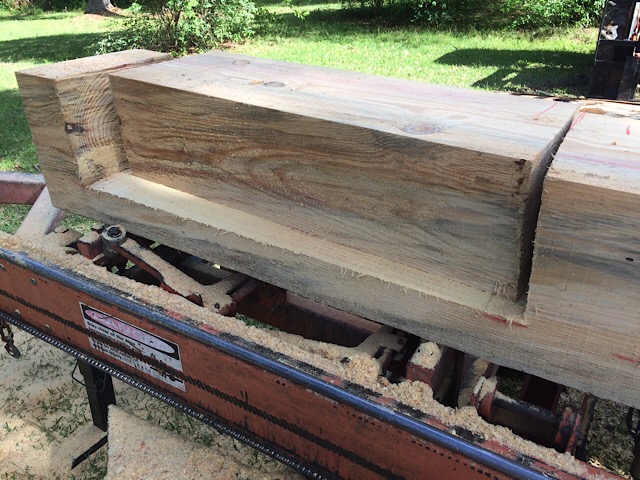 The second cut is made so we can now remove that block. 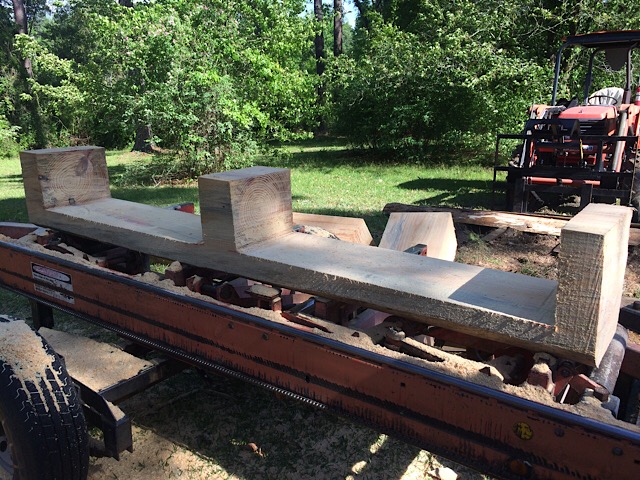 After both blocks are removed we can reattach the sides. 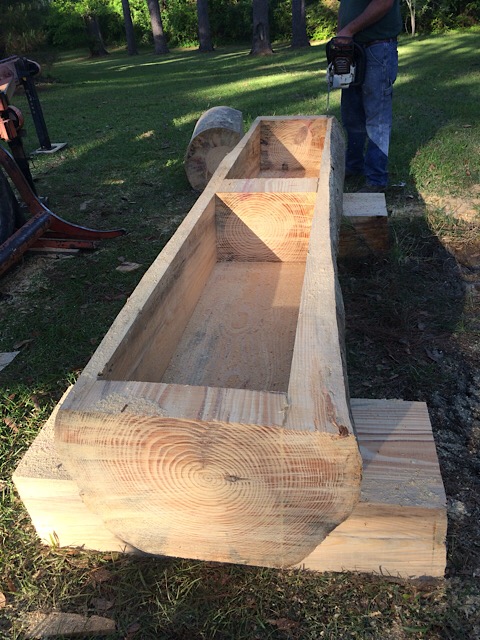 And use the blocks that we removed for the "legs".

The drinks will be iced down in this "log cooler".
Reactions: 3 users 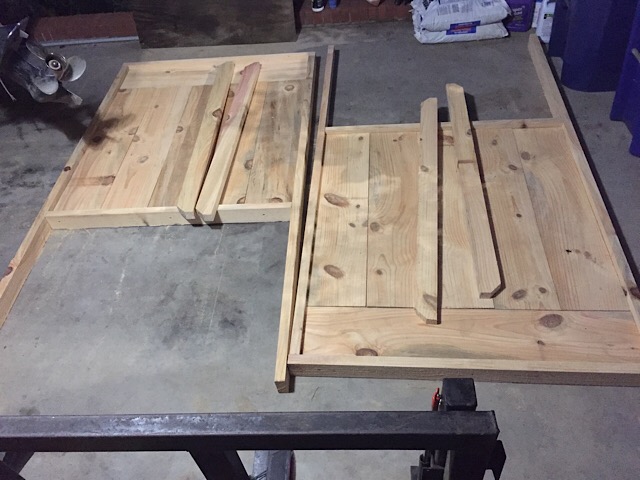 The axe throwing targets have been built and are now ready to be transported, erected, and braced.
Reactions: 1 users 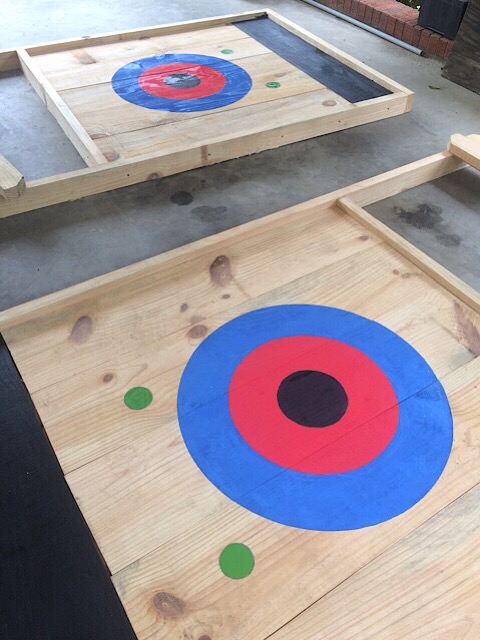 The Axe Throwing Targets are coming along quite nicely.
Reactions: 1 user 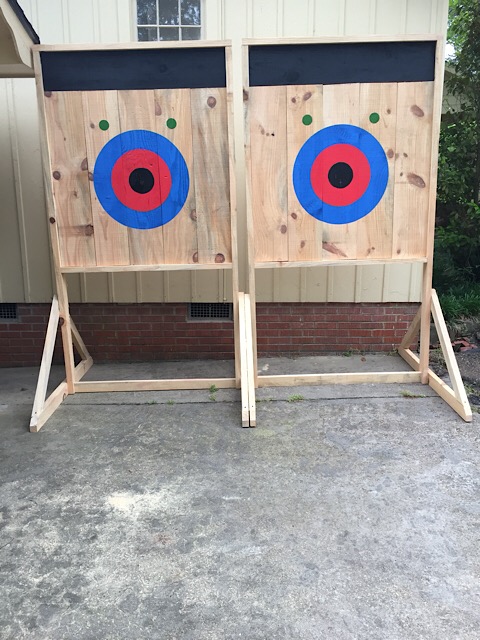 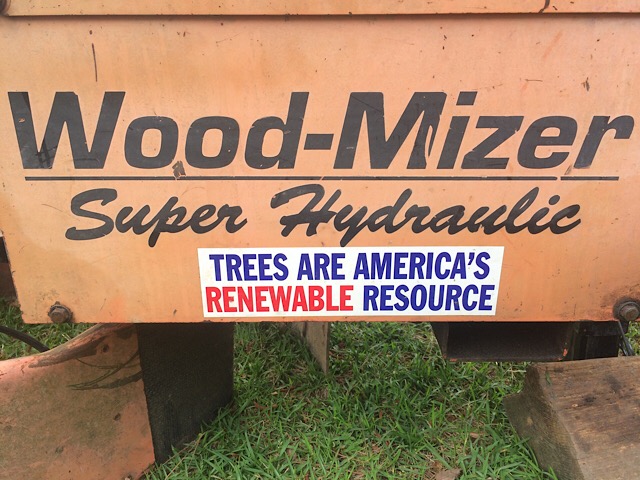 This sticker kinda speaks for itself.
Reactions: 1 users

Ya know if I was to throw an ax at those targets it would most likely go through the window behind them
Reactions: 1 user

We hauled and set everything up yesterday and today was Luke's High Senior Senior Party. 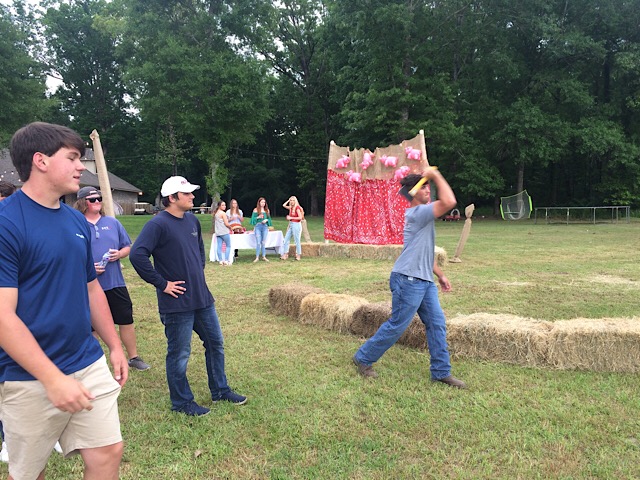 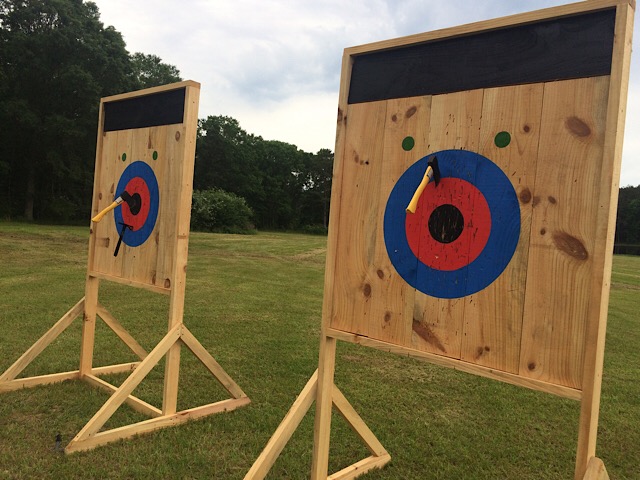 Three scoring hits. (There is also a small hatchet in the furtherest target.) 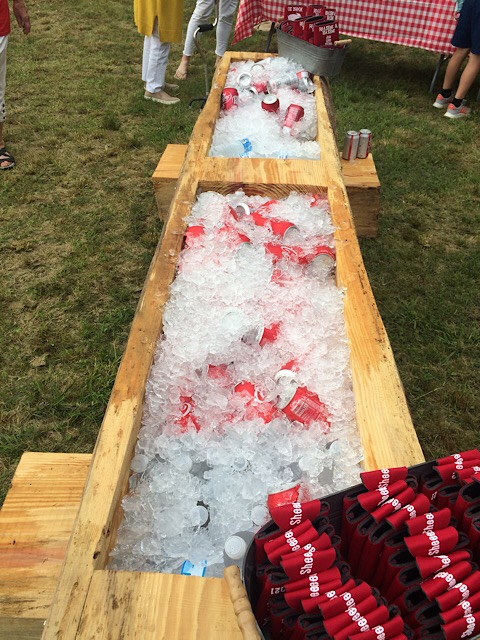 The log drink cooler was another scoring hit and was 100% successful.
Reactions: 1 user

OK there old son how did you put the log cooler together?

skeets said:
OK there old son how did you put the log cooler together?
Click to expand... 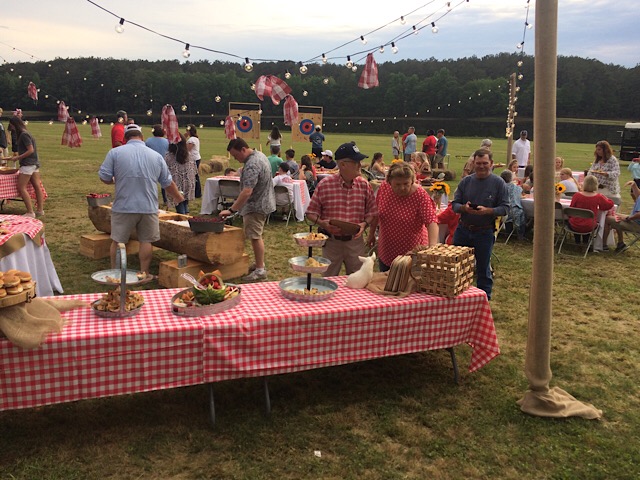 Da kids even left enough for some of da Grandparents.

skeets said:
OK there old son how did you put the log cooler together?
Click to expand...

A total of twenty four 6" screws for the sides and four 8" screws to attach the bases. Side note as planned, after the "cooler" got wet and the wood swelled a bit, it did not leak.
D

Those girls in the background look like they're waiting for one of the guys to wack off an ear!

After the boys cooled off a bit those girls took their best shots and some of them did quite well. Probably because they were not interested in being competitive.

Those poor targets were looking sorta weary as the night wore on.

Magicman said:
BigG, thanks for the "take care" advice. Yes, I am recuperating from Rotator Cuff surgery and can not lift anything. I can operate the sawmill's controls which I did, (with the Dr.'s permission) but I can not do any log/lumber handling. In this situation, my helper/tailgunner has helped me saw many times and knows exactly what to do. I was there a total of 4 days and he took very good care of me.
Click to expand...

Been there, done that (cuff surgery). Right one last June, left in October. This was the second time on the right shoulder. First was in 2013. A third time will get me a reconstruction.

The first time on the right, when the block wore off, I found out I couldn't take the pain meds the doc gave me. They came back out faster than I could put them in. I rode the first night out with no pain relief. About 2 o'clock in the morning, I was begging my missus to shoot me and put me outta my misery. She still loved me then, and wouldn't do it, but won't answer when I ask if she considered doing it. I don't think I'd be foolish enough to do that now.

After that, I took nothing but anti-inflammatories (Nabumetone) and a couple acetaminophen twice a day. The second time, I got the Nabs and Aleve started before the block wore off, and did very well with it. NO opiates at all. Completely different procedure from the first. Had a tenodesis in the first repair, to prevent "Popeye bicep". Just a cosmetic thing, mostly, but I wasn't told that until the second time around when I didn't need it. That's what made it hurt so bad the first time. Tenodesis requires drilling a hole about 1/4" in diameter in the humerus to reattach the major bicep tendon. I bruised all the way to my wrist.

The first tear was because of age/arthritis and poor ergonomics. The second was because I took a spill off my brand-new front porch that I'd built with composite decking. Little did I know (but should have) how slick the bugger would get with frost on it. The left was for the same reason as the first time on the right, however, not nearly as bad a tear. Mostly just scope and clean. But it's being a lot slower about healing.
Show hidden low quality content
You must log in or register to reply here.
Share:
Facebook Twitter Reddit Pinterest Tumblr WhatsApp Email Link