In general I will say the L gets twice the work done in the same amount of time with FL/BH/logging winch/grapple and snow blower. A little less than 2x the work mowing as I use the same mower on both tractors.

I like the B2620 when in the tighter areas making firewood work when no trails around.

Grindstone said:
Thank you! Yea, that would be a big upgrade for me. Totes are the best but I dont think i could swing getting into that big of a tractor to be able to stack them two high. I will check the specs like you said and explore a little bit cause it never hurts to be informed.
Click to expand...

No matter what you decide I’d recommend you price multiple…including even those bigger than you want, especially if financing…per monthly it isn’t that much between models and some models will be real sleepers where it won’t make sense (ie L2501, MX and M ) the price compared to others in terms of what you get between weight and capability and price. It’s pretty simple at 0%. 5000/84 is about $60/mo. Sure it’s a lot over the term and that doesnt include insurance in that swag. But the dollar is devaluing…would you rather have a tractor or watch your money not keep up with inflation in the bank. If you get the green light from the supervisor, get the one you want for the work you want to do. There are a lot less valuable things to collect and waste money on than a tractor IMO.
Reactions: 2 users 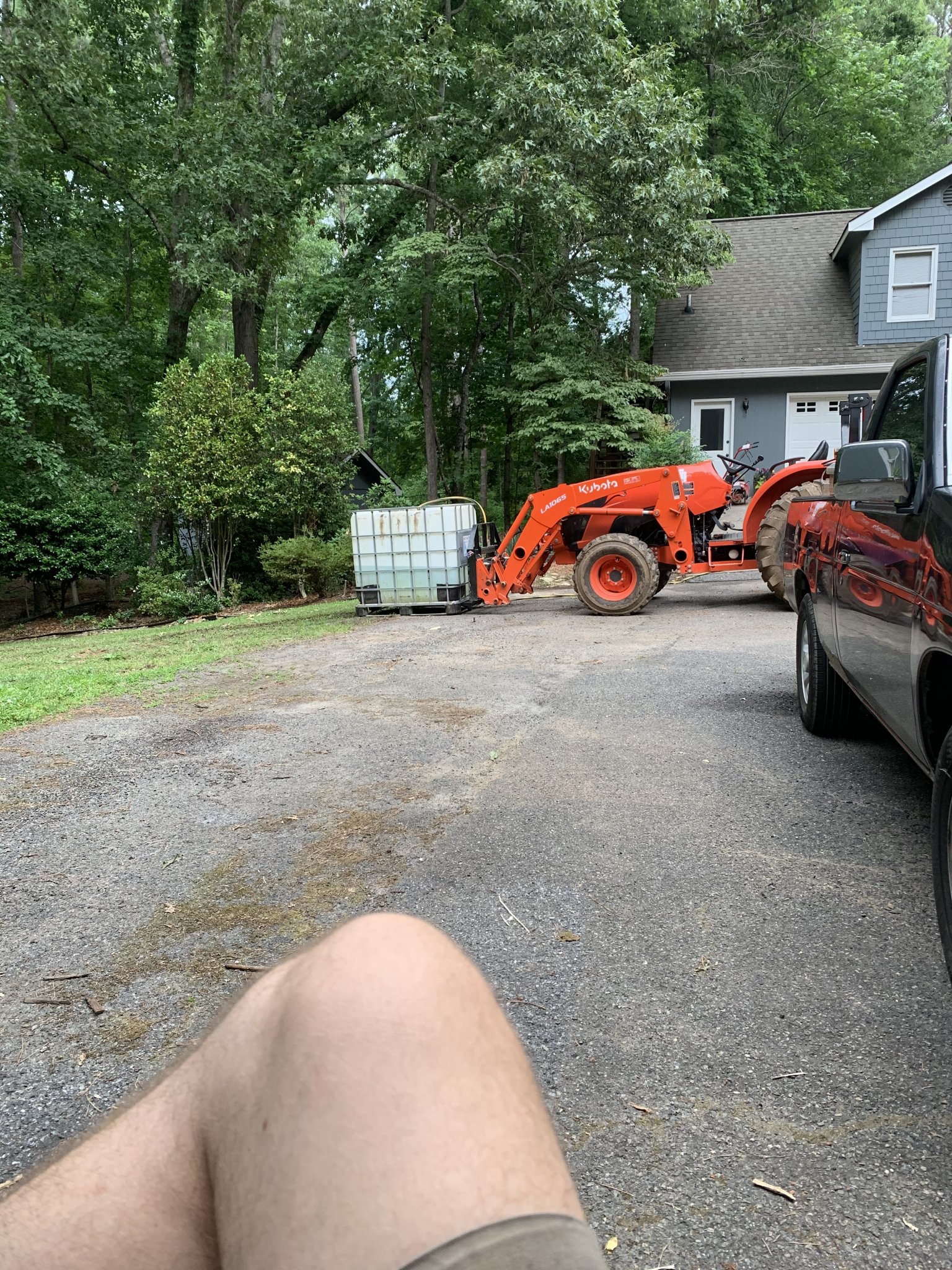 This is my garden water setup. 275g tote. MX won’t budge it full, emptied to about 250/top horizontal bar and it will lift it and drive, but feels terrible with 720lb box blade, loaded tires and 3 sets of wheel weights. Never lifted it more than waist high or so.
Reactions: 1 users
X

Getting advice from others is always difficult because everyone’s situation is different, even if they are similar. I have an acre and started off with a BX1880. After a year and a half with that, the wife wanted a chipper so we could clean up the wooded area around our house and get rid of the pile of brush we seem to create every year. Seeing that most of the hydraulic feed chippers recommended more PTO power than the 1880 had, I used it as an opportunity to upgrade to a B2601 as we are tying to buy some more land around us as well as I tend to have some lifting tasks that the BX just couldn’t handle (moving large rocks mostly). The B2601 let’s me get my chores done faster, moving dirt, mulch, rocks, gravel, etc while still being small enough for my needs.

My point in all this is that most would, and did say, that a BX was the right machine for me. If I had bought a 2380 from the start I probably wouldn’t have upgraded, but the 2601 has proved to be perfect for my needs. The extra ground clearance let’s me go over stuff without having to worry about clipping stuff on the underside, the extra lift let’s me get stuff done faster (only having to split rocks once instead of 2 or 3 times) and the extra features like position control and the 3 speed HST are appreciated.

Really, only you can decide what is right for you and your needs/desires. If the B2601 does everything you need 90%+ of the time, it is probably good enough, but as others have stated, the larger machines come at the cost of reduced maneuverability. If that is important, and sounds like it is, than I would deal with the minor inconvenience it may create for those few times it’s an issue.
Reactions: 4 users
I

Grindstone said:
Very true. Guess I just got spoiled when I was lucky enough to get 0% for 84.
Click to expand...