I got slowed down on my project. About all of the body panels are painted and ready to go. The fuel tank is already installed. UpNorthMI posted about a farm dump trailer he bought. That got my wheels turning. One of these would very useful and cool to use with my Oliver Crawler. I was about to purchase one just like his. Then I found this one on marketplace. I saved a few thousand over the cost of a new one and it will work just fine for me. I have to get the hydraulics back on my Oliver but it operate the dump just fine 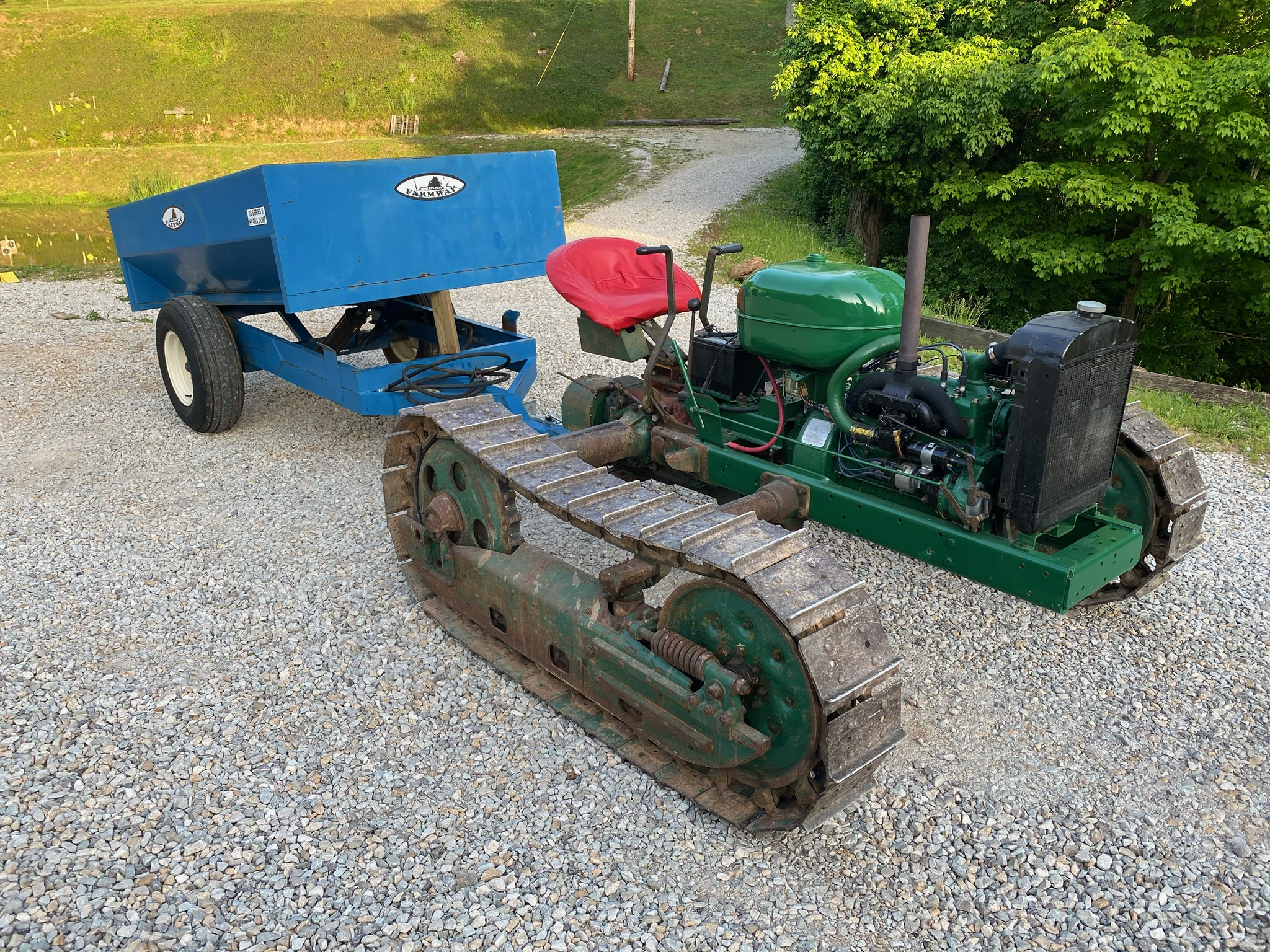 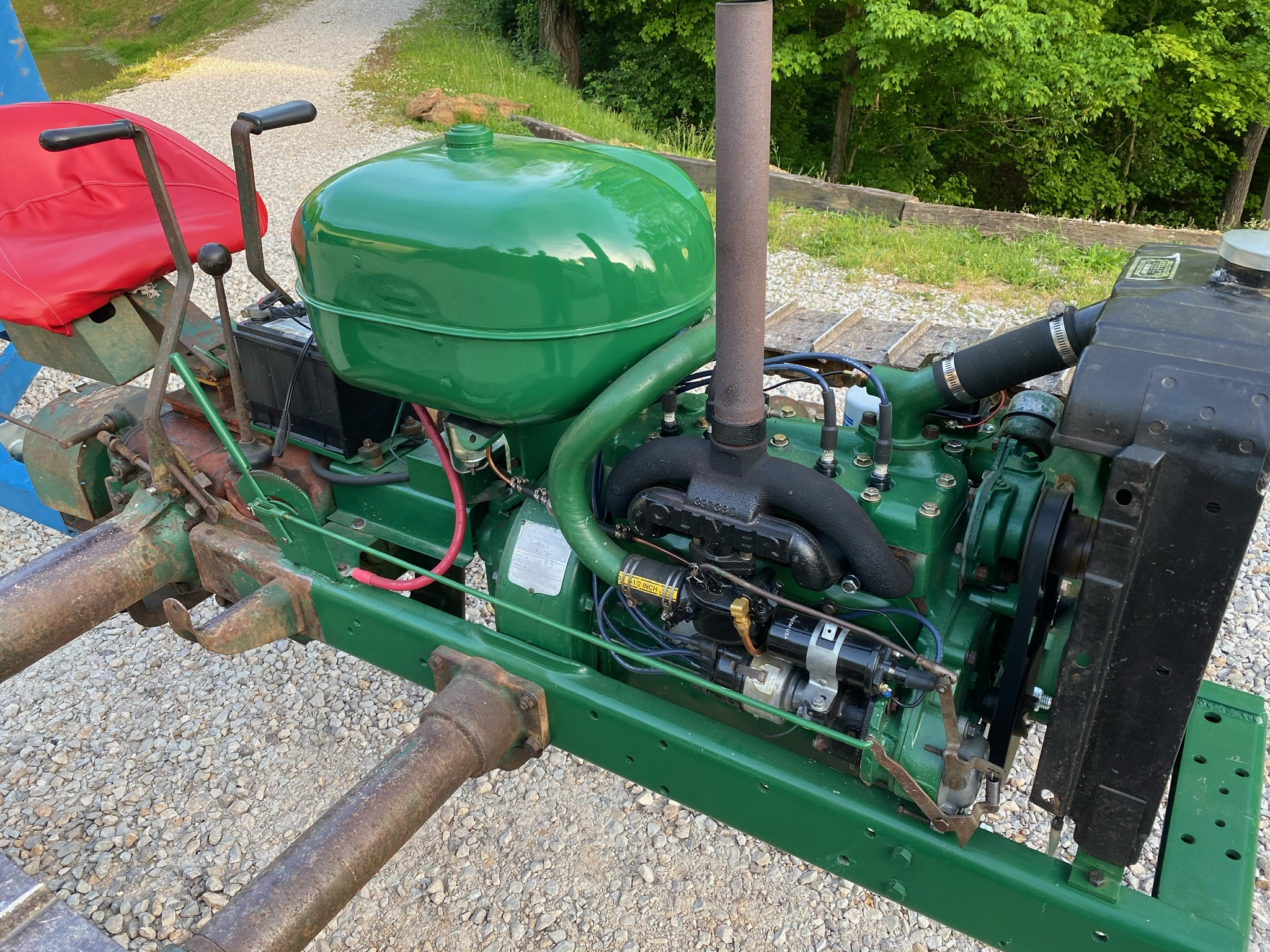 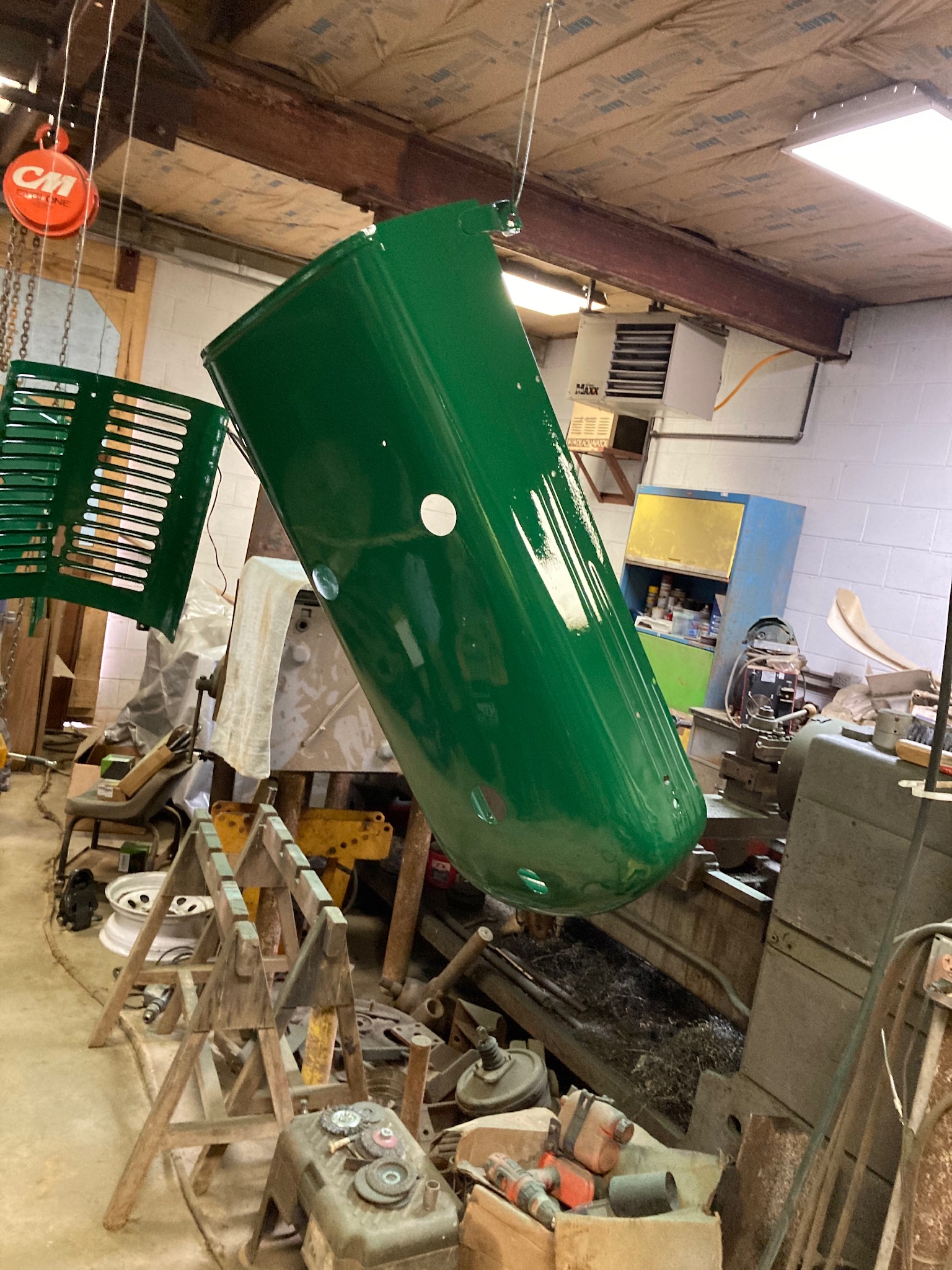 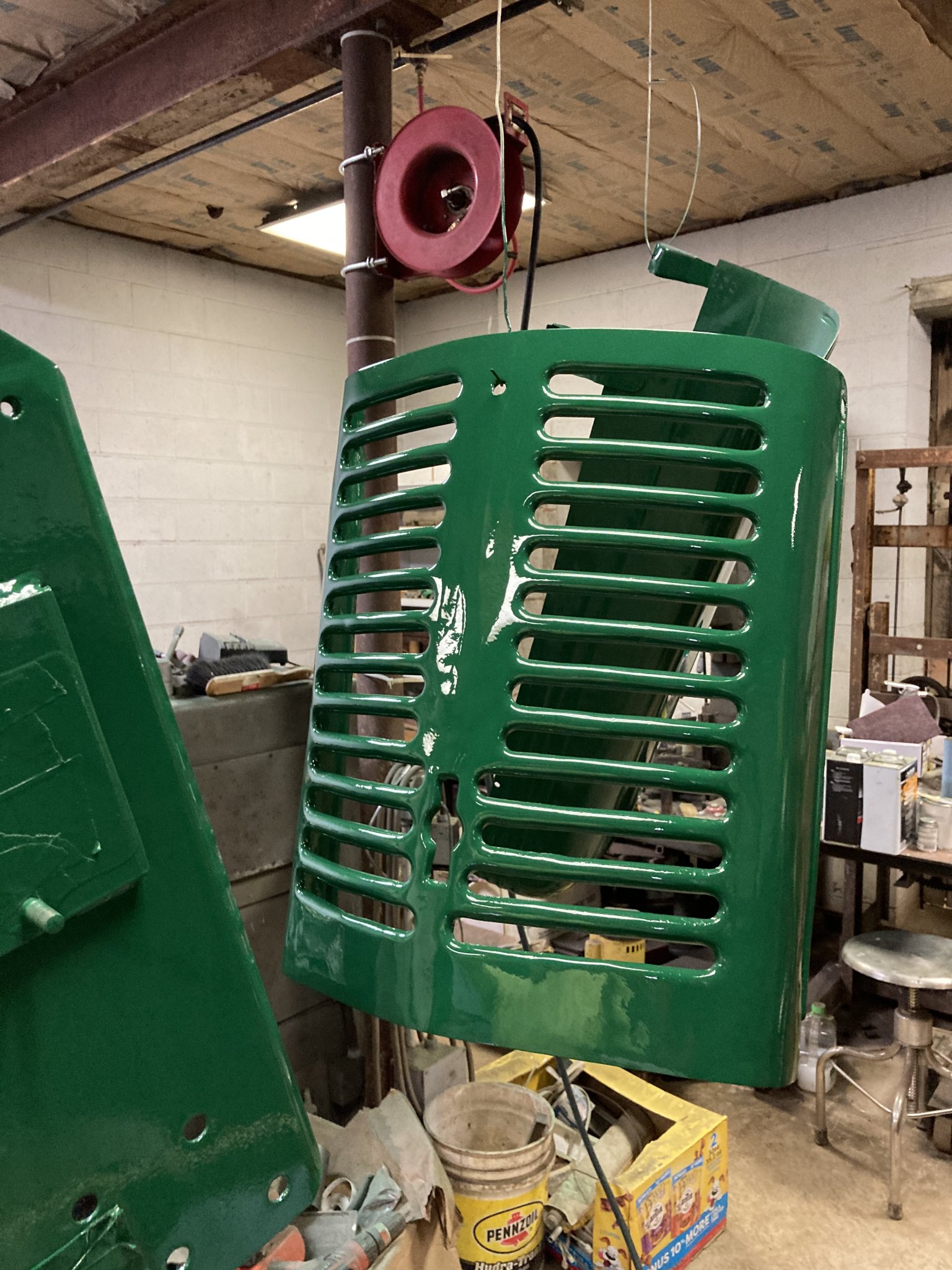 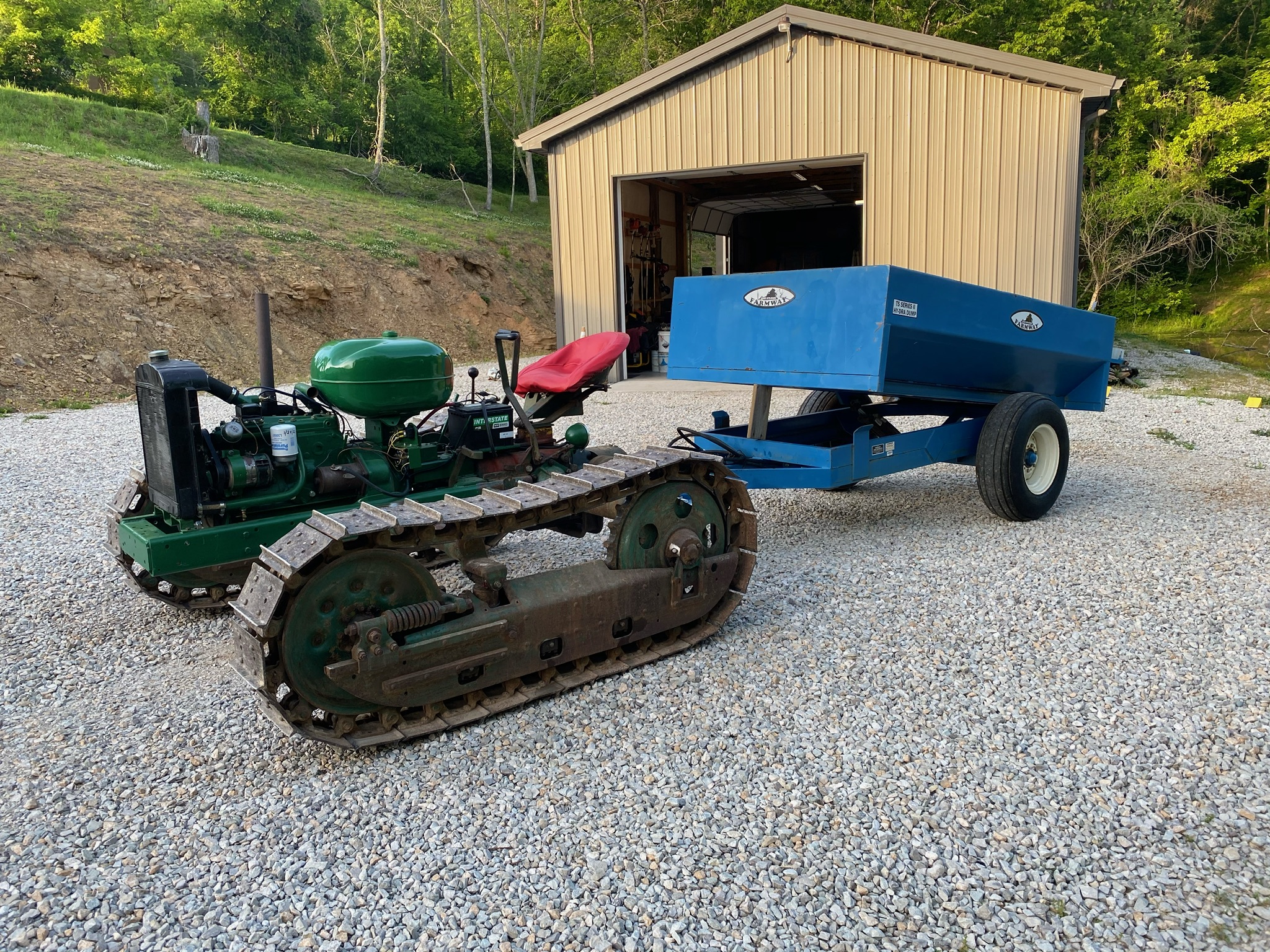 All you need is a gun turrret mounted on the top.
Sweet machine.
Reactions: 1 user
D

When I built my home 35+ years ago, I purchased a Oliver OC-3 tractor / bulldozer. It was a partial build by Oliver, and delivered to the dealer in Massachusetts, Boston Tractor, and they completed it for grading the slopes on the Interstate highways that were being built. It had a very wide track for stability, but it was next to impossible to keep seals in the final drive. There was an old fellow locally that had a lot of NOS parts for them, and he also had a number of parts machines in his yard. He also had a full machine shop in his backyard to rebuild parts. He was a retired machinist at Pratt & Whitney, and a master at his craft. He built a 3 phase converter to run the shop, using an old 10 HP electric motor, and powered it with a 3 HP 110 electric motor. He explained how it worked, and I remember him telling me that CL&P (Connecticut Light & Power) didn't approve of what he was doing, but when the "inspector" retired, he asked him how to build one for for his woodworking shop. I can still see his shop in my minds eye. I am now older than he was back then. Somewhere in the cellar, I still have the manuals from that old machine, along with the manuals from my old Minneapolis Moline.
Reactions: 1 user
S

Man, that is a job to be proud of. Very nice.
Reactions: 1 user

Cool project!
A few years ago, I went with my father-in-law to pick up a transfer case on the north side of Detroit. We walked in the guy’s garage and there sat an Oliver crawler. Not what I was expecting to see in a neighborhood on a city street.
Reactions: 1 user
P

That is gorgeous!
Reactions: 1 user
B

Papadiver said:
It’s my 1951 Oliver Crawler HG-68. My family bought this brand new in 51. I am in the process of restoring it to first class working order. Not show quality. I have rebuilt the motor. Years ago I converted it to a distributor system. I have just converted from 6V positive ground to 12V negative ground. Got it started on last Friday. It’s doing great! It will have an easy life now. At 70yrs old it will pull logs for firewood, pull a drawbar mower and a lot of sunday afternoon tractor rides!
If my pictures work the first one is before I started. The rest are during the rebuild process.

I owned an Oliver OC46-3G (gas -tracked loader) for a few years back in the very early 70's.
Good old machine, but too small for the work I was trying to do.

Would you mind posting a video of it operating. Beautiful work.
Reactions: 1 user
P

thebicman said:
Would you mind posting a video of it operating. Beautiful work.
Click to expand...

Sure. It will just be a few days before I can get it out and do that.

Nice job..... Great to have the memories to go with it...
Be sure to post more pictures..
Reactions: 1 user

Well odds are you aint getting out to file it this week end unless you plan on pushin snow . If I may where in West By Gawd are you
P

skeets said:
Well odds are you aint getting out to file it this week end unless you plan on pushin snow . If I may where in West By Gawd are you
Click to expand...

Down in the south west corner where WV, OH and KY meet. Yep it’s raining already. Temps are dropping. They say it will be snowing by midnight. 3”-6” of snow forecasted for tomorrow. 14 deg Saturday night.
P

I put it to work this afternoon and cleaned a ditch out.

Yep its raining up here inthe coal country too and wind out of the NW I had to get s fire going,, brrrrr
Reactions: 1 user
P

skeets said:
Yep its raining up here inthe coal country too and wind out of the NW I had to get s fire going,, brrrrr
Click to expand...