I couldn't reach the crank handle from the seat of my LX, and the lack of vertical adjustment, convinced me I needed to get powered actuation on the chute. Truthfully, it didn't take much convincing .

I didn't like the sloppiness of the worm-drive, so I opted to directly drive that ring gear with another gear. Unable to find any off-the-shelf spur gears of the right size, I decided to fab.
Started by finding a spur gear model in SketchUp 3D Warehouse. I used that tooth profile to model up a 10-tooth gear. Printed it to scale, glued the print to a piece of 1/4" masonite, and cut out the profile: 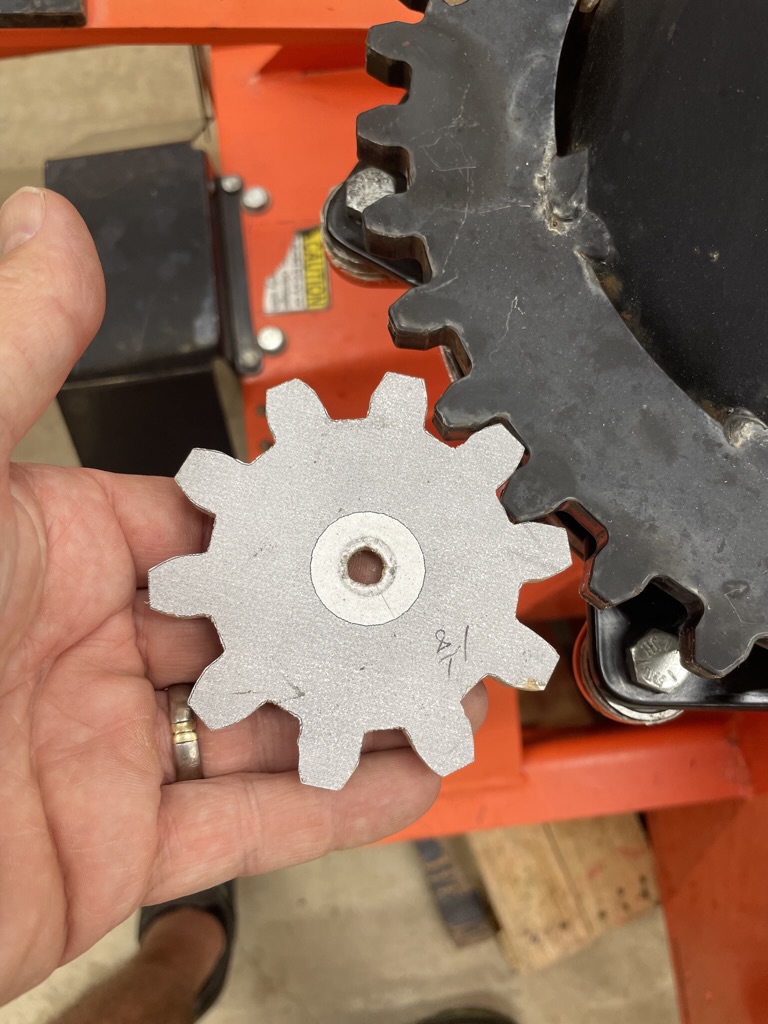 For the motor I figured a windshield wiper motor would do. 12VDC and has a worm-gear reducer built in, and can be had for less than $40. This one was listed for Jeep Wrangler rear wiper. Mounted on it 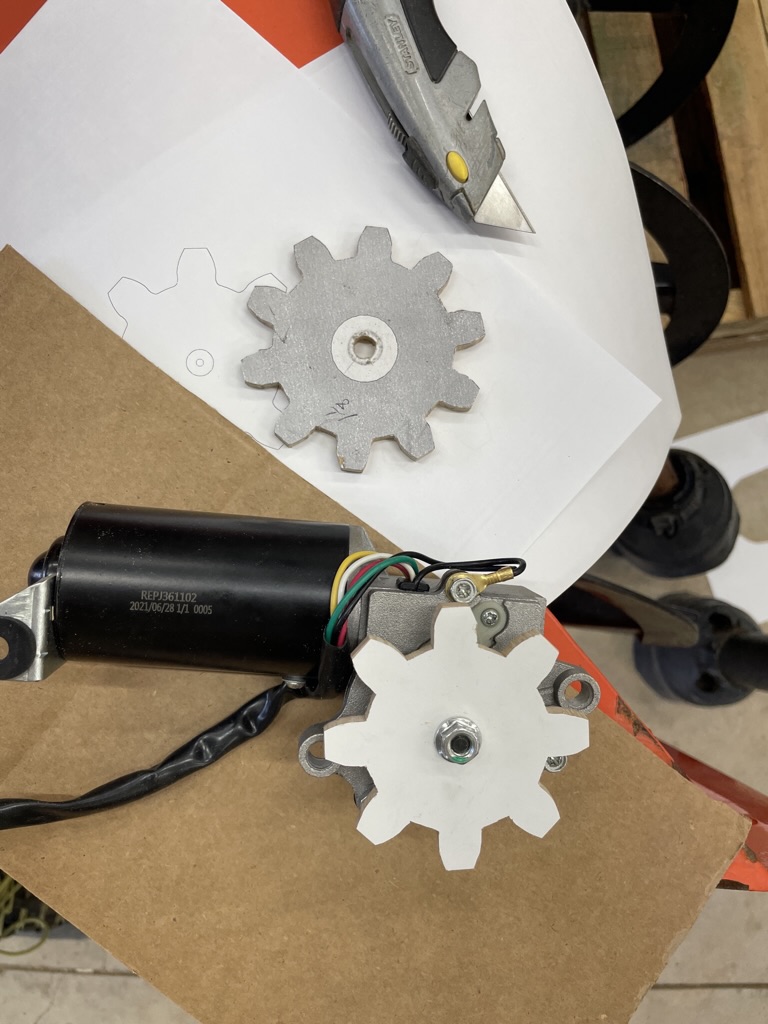 is the 8-tooth gear I made after deciding the 10-tooth was a little too fast.

Mount the motor with a piece of aluminum plate I had in the materials bin (been there 20 years, no lie - sometimes hoarding pays off). Fabbed the gray standoffs from some block PVC also on hand. Needed a 3/4" spacer, so that birch plywood was perfect. I'm telling myself it's temporary... 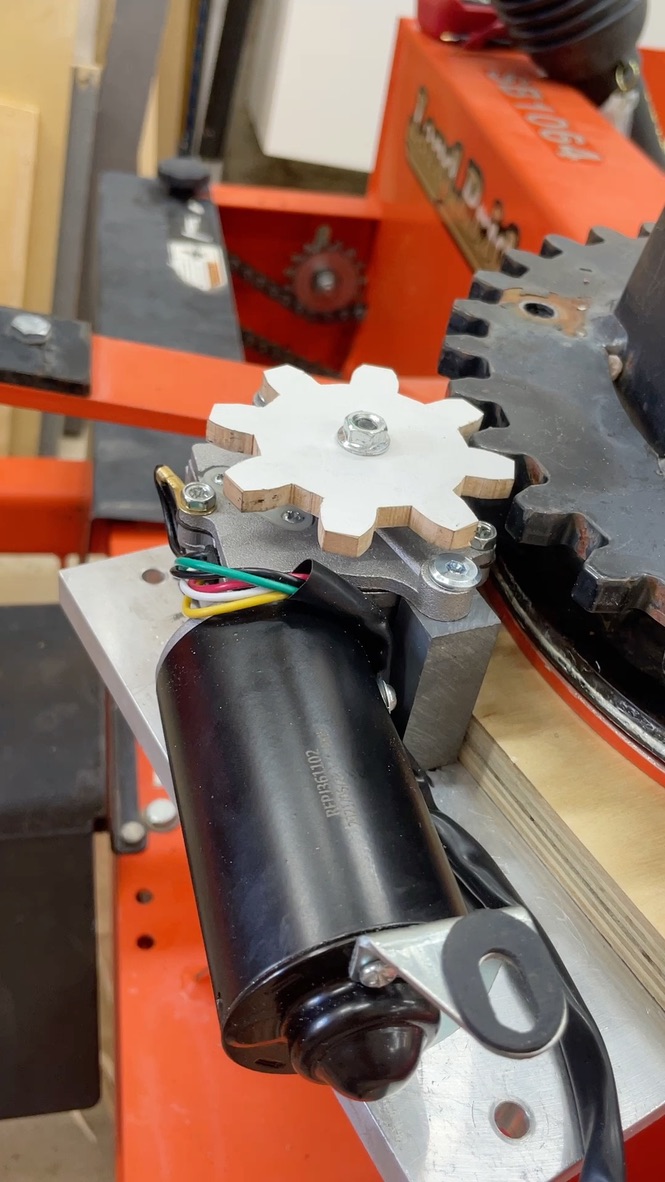 Mounted two DPDT momentary switches in a chunk of ABS (also from the scrap bin). I opted against the joystick some others have done because I couldn't find a joystick capable of reversing and adding two reversing relays would've added another $50 or so. I can always make that enhancement later if desired. 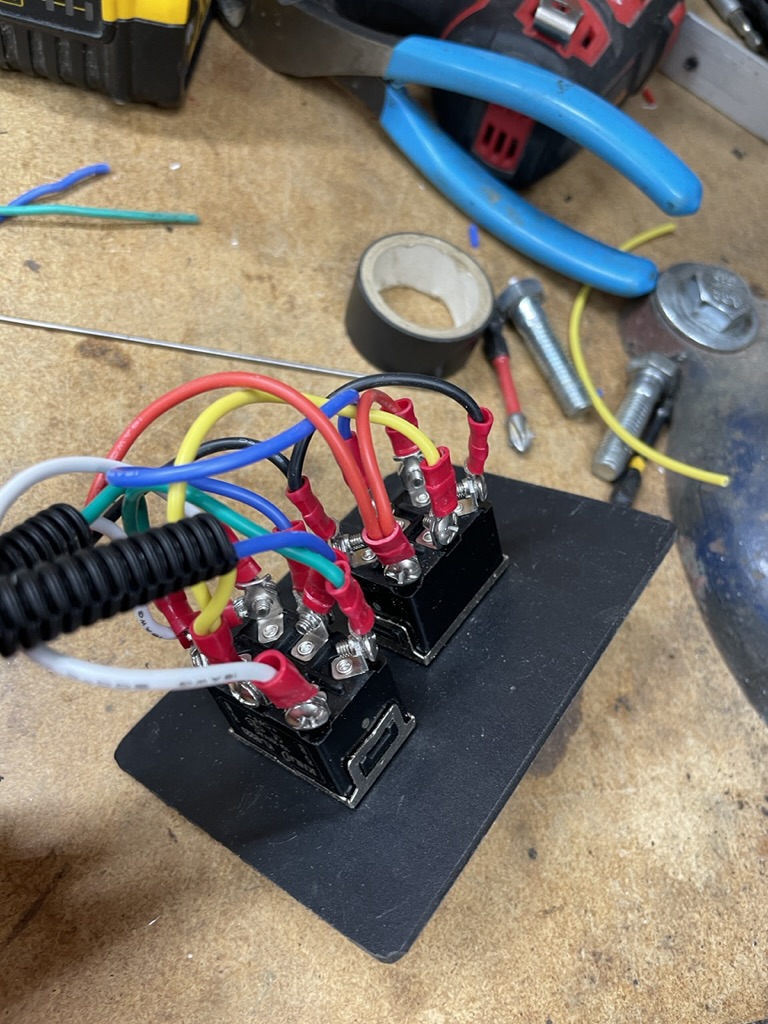 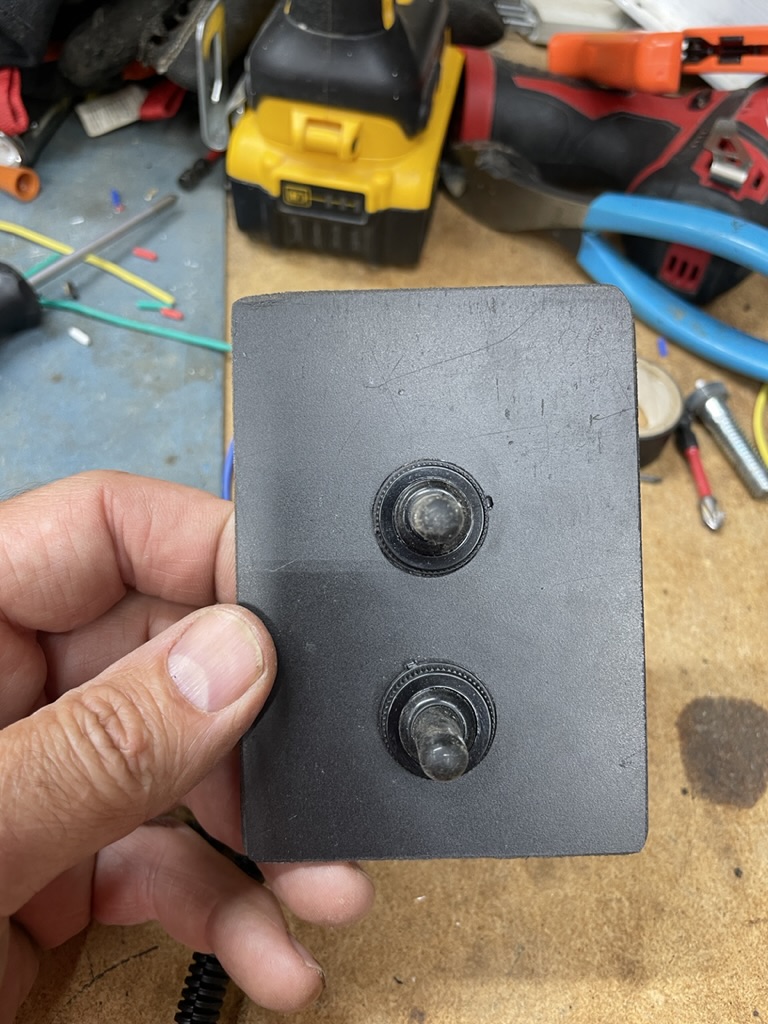 Satisfied with my gear design, I ordered one CNC cut from 1/4" thick UHMW. $60 shipped to me: 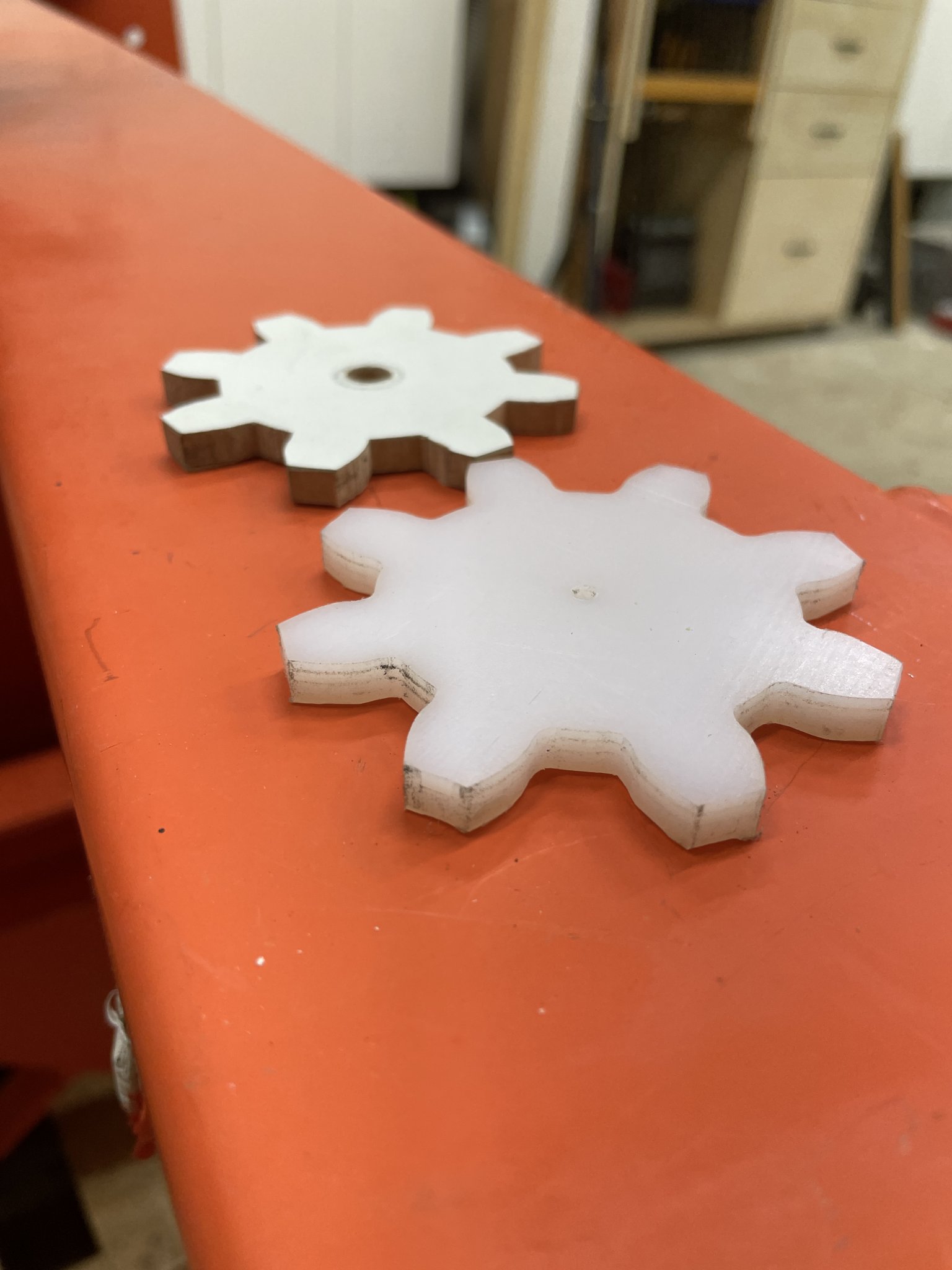 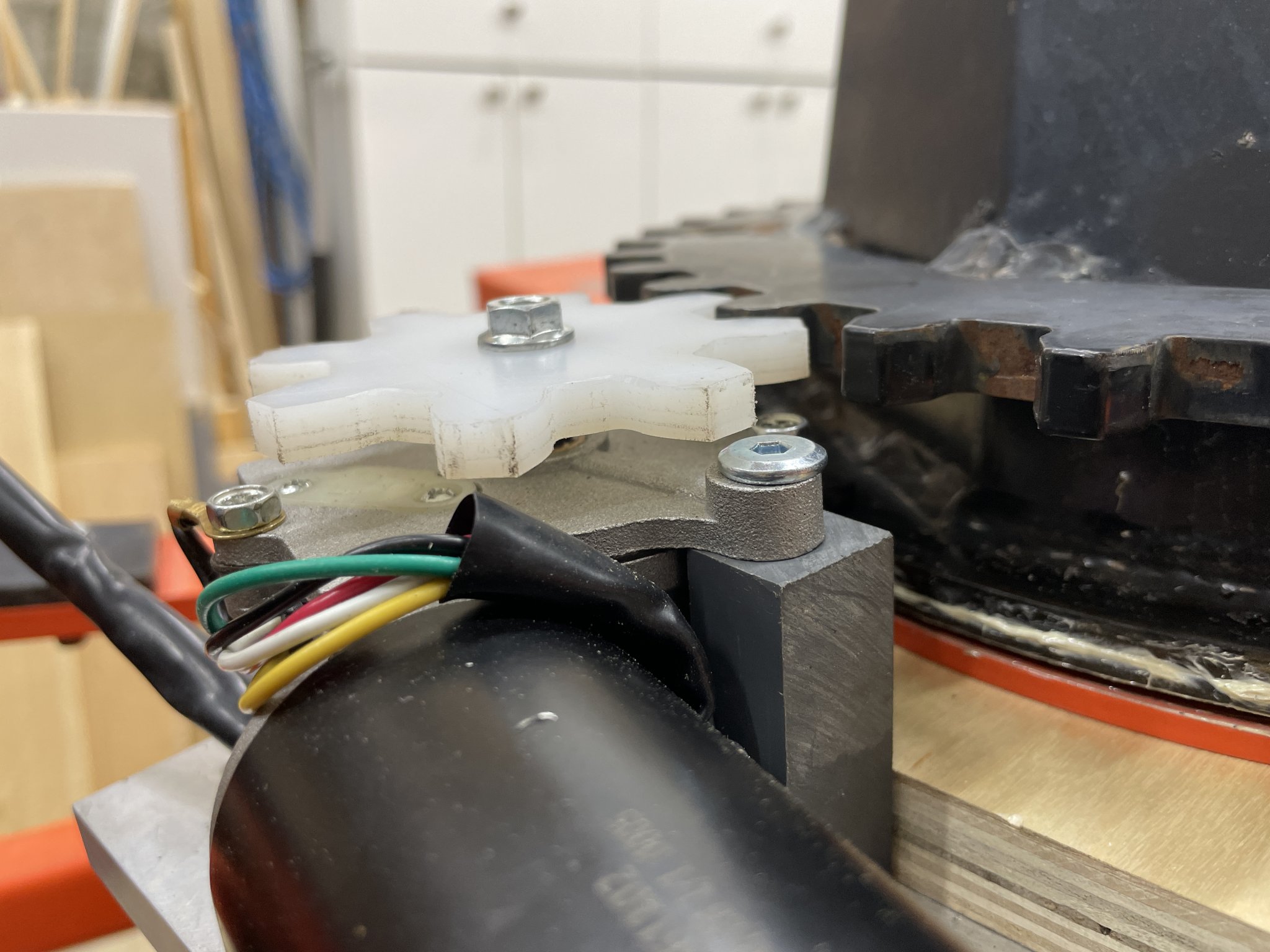 Some nice watertight connectors; thanks, Kubota, for having a fused accessory circuit already there from the factory!

In action! Don't mind the blue tape holding the switch panel in while the silicone dries. Forgot to mention, I also had the linear actuator on hand from a previous project. 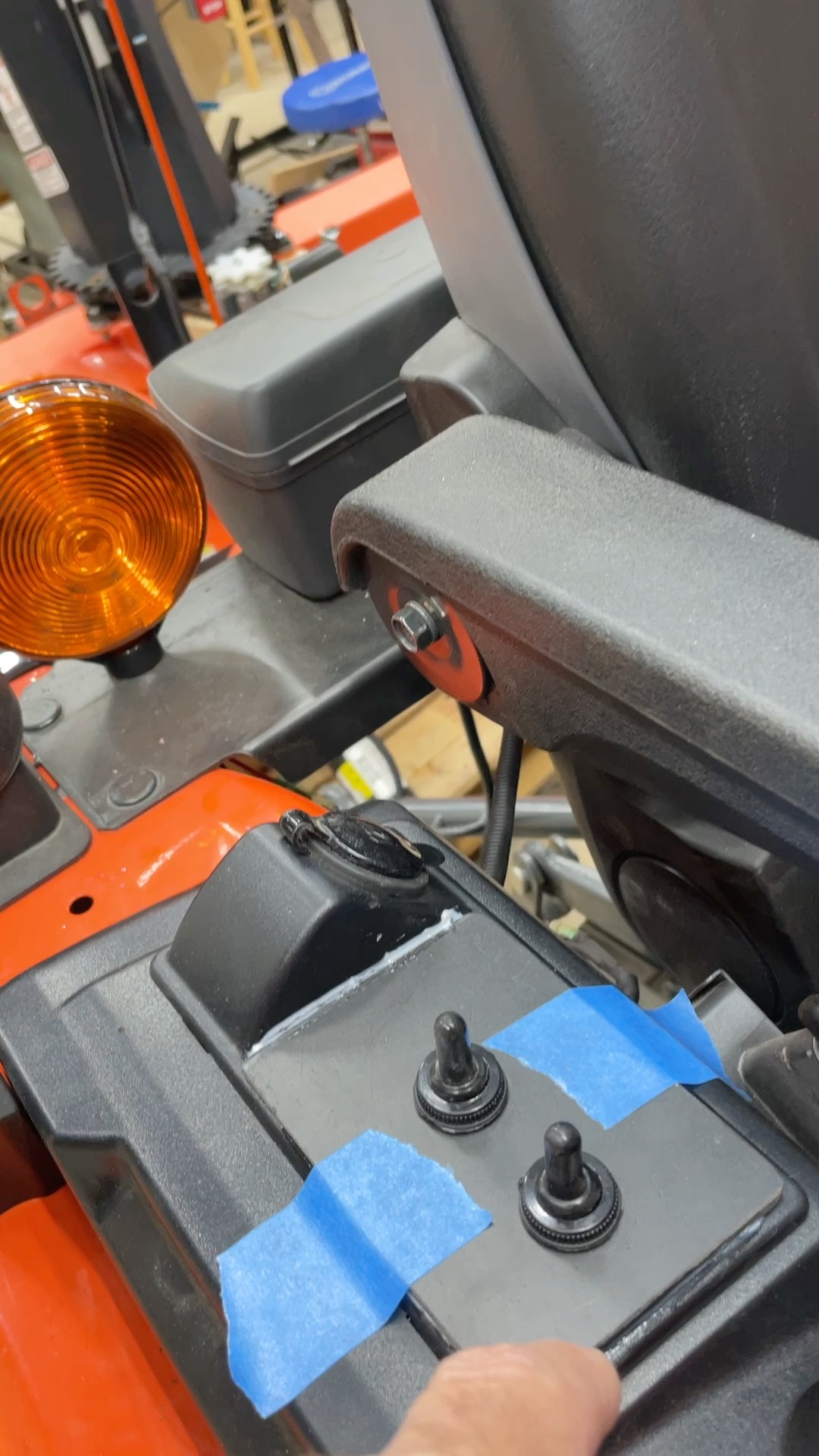 [hmm... can anyone tell me if it's possible to embed video in a post?)

I'll probably make a shroud over the motor to keep some of the snow off.

Bring on the snow!

well poo, I uploaded it to youtube but since it's a "short" I can't seem to find embed code. You'll have to click the link, I guess.
youtube
Reactions: 1 user
Y

I have to ask, why didn't you make the UHMW gear as you made the wooden one ?
S

GreensvilleJay said:
great work and post, except for your last line........

I have to ask, why didn't you make the UHMW gear as you made the wooden one ?
Click to expand...

Accuracy, mostly. I made the wooden ones with my jigsaw clamped upside-down in the vise, as I don't have a wood-cutting bandsaw.

And I didn't have any UHMW or Delrin on hand, so I decided to just have one made.
If this plastic gear doesn't last, I'll have a steel one laser cut. That's about $100.

Excellent! I similarly converted my Blizzard blower to electric activation. I am not as mechanically adept as you so for the chute I opted for a direct drive motor I found on Ebay. A friend welded a mounting plate and a double jointed universal coupling made it easy. Maybe not as eloquent as your fab 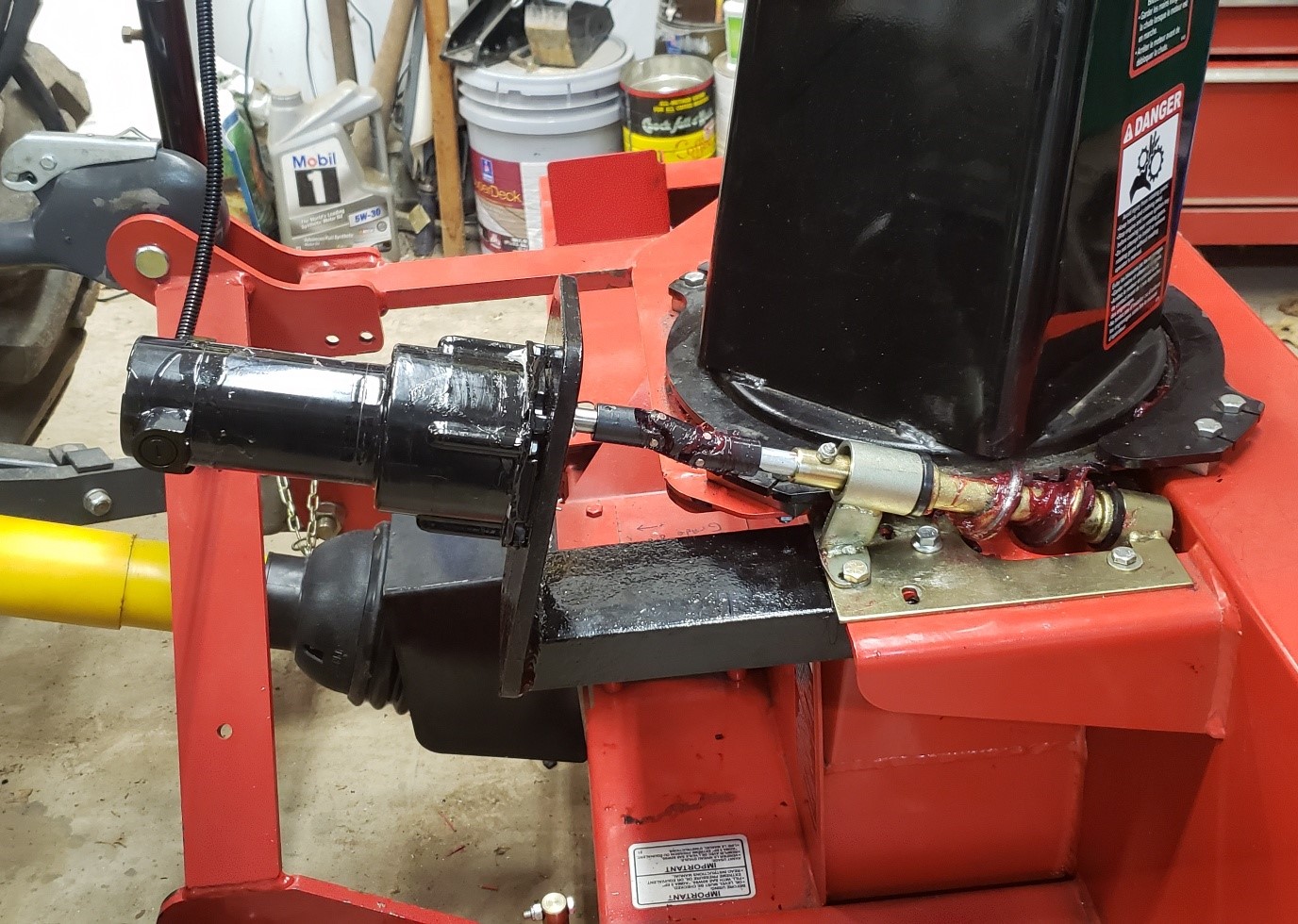 btw I was able to find a 4PDT center off joystick that worked great for both the chute motor and linear actuator for the deflector.
Reactions: 1 user
O

Showmedata said:
Accuracy, mostly. I made the wooden ones with my jigsaw clamped upside-down in the vise, as I don't have a wood-cutting bandsaw.

And I didn't have any UHMW or Delrin on hand, so I decided to just have one made.
If this plastic gear doesn't last, I'll have a steel one laser cut. That's about $100.
Click to expand...

Personally, I would not be without that metal gear.

If you have had this blower out in use already, you have probably experienced the few times of binding or needing extra oomph to rotate it. While I don't know the strength of that UHMV for this application, I would bet it will not last through too many of those situations.

If you can't easily transition back to manual while waiting for the new gear or have a new gear on hand, it could be problematic.
S

@ctfjr I read through your thread before embarking on mine. Frankly, it's when I was hunting for a suitable motor (at a decent price) and not finding one that I landed on the wiper motor idea and shifted gears (/bad pun).

@Orange1forme thanks for advice. This will be my first winter with the blower, do I don't yet have experience with. Appreciate the tip.

Waterproof that motor! It's not enough to shield it from snow. Paint it with undercoating, Plasti-dip, Flex-Seal, whatever. If moisture creeps in there and freezes, it will play havoc with brushes, break off magnets, etc.

Yes, waterproof it or it won't last long.
If you have a gravel driveway, or they spread sand/rocks on your road, your "plastic' gear is not liable to last too long either.

Every few snowstorms, once I am done and the blower is thawed out inside, I need to clean off small rocks from around the giant ring gear. Not usually mid winter (hopefully most of the rocks are frozen down deep) but first few blows in the fall and last in the spring....<EDIT>now that I think of it, happens mid winter once in a while too when the snowplow or grader goes by and he's been a little too aggressive, so yeah, at any time at all really !

I just think/guess/wonder that a plastic/teflon/delrin/whatever gear is no match for an electric motor and rocks.

Delrin is surprisingly tough. But if it doesn't stand up, my material of choice would be brass rather than steel. The gears will not be lubricated, but like Delrin, brass is inherently self-lubricating, corrosion resistant and would wear before the (harder to replace) steel gear.
Reactions: 1 users
S