Gents, my new to me BX2350 has a missing fan blade on the HST. I have the factory workshop manual but its not helping me much besides showing me a picture. I ordered new fan (among other things) and would like to replace.

Has anyone gone through this, can you share any tips or pointers?

first tractor, im totally guessing here, but I think I remove the bolts at the front coupling, then can yank the whole (propeller) shaft out to get to the fan?

(tried searching but "HST and fan" were too short to qualify)

Never had a BX, but have read about fan vulnerability. Here's how one guy did it:

well instead of using the forum search feature i used google and found the many many threads on this, boy it looks like im in for a treat
Last edited: Jun 15, 2019

Yep it's a workout, requires you to pull the motor forward to change the fan.

Thank you for that video that was the first I saw of that particular trick with the bolt at the 8 ock position. I will give that a try.
R

I believe there are aftermarket under body protection plates available that you may want to look into for your machine.
Semi related, I installed a custom plate to protect the 3rd function hydraulic hoses on my L4060. Money well spent IMHO.

Bxpanded makes a skid plate. Will be ordering that and installing before I put this machine into service for sure
D

not sure how different the 50 series is from the older BX23, but I had to remove the seat and floor to replace the fan. There was enough room to swap out the fan without sliding the engine forward.

The whole thing was roughly a 2 hour job, but quite simple.

And yes, after that I got a set of skidplates from BroTeck

FWIW....I asked my dealer about replacing the fan...he advised it's not worth it. (labor costs, etc). Talked to a couple of other owners that didn't replace fans either, said they had no overheating issues on the tranny.

Here is a brief walk through of HST fan on BX2350. During my searches I did not find any write ups for this model. Pauls video on youtube was close, but not exact for this one. It was the most helpful video though.

I got this done yesterday, sort of, I ended up bending my drive shaft after finishing it, so as long as you're not a bone head like me, it should be a one time affair, install a skid plate and you'll never have to do it again.

After viewing every youtube video, and reading every thread until my eyes bled, I opted to do it from the top. I wanted the extra room to work and didnt want to drill a hole through the deck. I don't think on the older bx, doing it from the bottom is even possible. Time to remove all the upper panels is only around 45 minutes for a first timer.

- Open hood, remove engine side shroud, unplug headlights and detach loom from support brace.
- Remove the bolts that hold the entire hood bracket on, they are attached at the front frame, should be 6x 15mm bolts. remove the entire thing set aside.

- Seat comes out with one pin. Remove floor mat, remove foot deck by unbolting its bolts, and orienting deck up and away from pedals. - I had to remove plastic hydraulic covers under the battery box, just a few bolts.

- Remove rear fender body by unplugging wires going to rops, and tail lights. -Remove ROPs, remove knobs (yank them off), remove bolt under fenders that go to rear grab handles. Use care these 'nuts' are cast into the plastic. Mine were stuck, I used a cutting wheel and cut handle (ordered new handle set, not expensive). - Fender will come off.

I was glad I did it this way because the amount of nastiness was real. I got to cleaning.

- You can remove the 3 bolts that attach the front drive shaft CV to the crank. On older models without the removable coupler between the shaft and crank, you are out of room, and need to move the engine forward...

- Undo the 4x 10mm bolts that hold the radiator shroud around the fan. Two on each side, on the right side one of them just above the lower hose. The two top ones have heads that are secured by the under dash frame. If you got the right ones the whole radiator and baffle will be loose, make sure it can lift up out of the rubber feet on bottom.

- Spin shaft to access the bolt allowing shaft to be freed from rear, it will slide froward about 3 inches off the splined HST shaft.

That's really about it, you can change the fan. Dont over tighten fan bolts or the vertical one. The vertical bolt that goes back onto the shaft, there should be a flat spot on the HST splines where the bolt will align, my machine did not have this flat spot.

- Put engine back, and shroud, dont forget the ground straps, make sure radiator is seated back into its rubber feet.

I wrapped rubber pad around the shaft and put a vice grip on it so it wouldnt spin when I reattached the front coupling. Remove vice grips, put stuff back.

I liked doing it from the top, you have lots of room to work, and there was so much crap caked in there it gave me a chance to clean, and replace other miscellaneous items (fan belt ect).

I then started the tractor with the clamps on the middle of the drive shaft, and bent it, so I will be doing this a second time when the new shaft arrives.


older machines do not have the second 3 bolt coupler 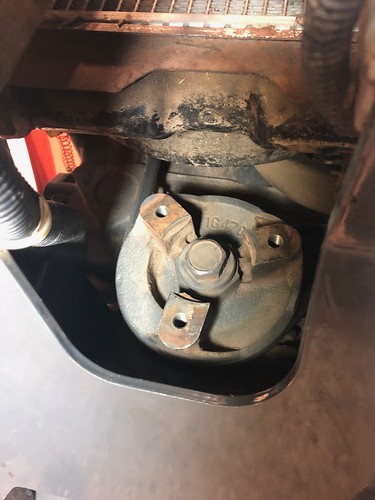 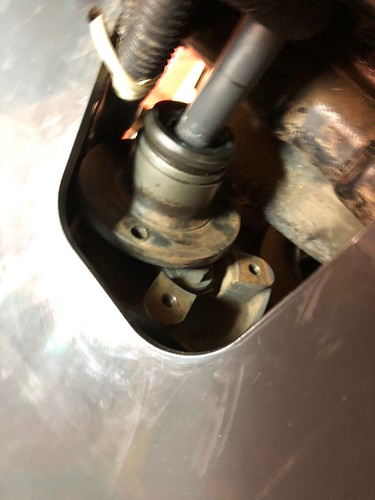 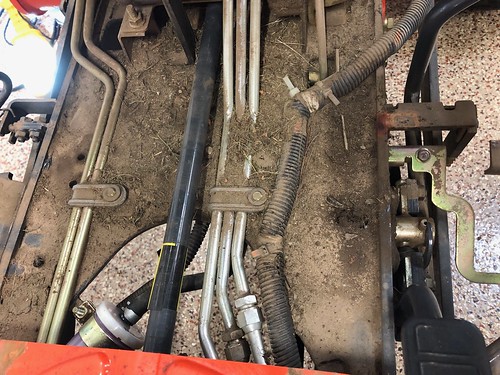 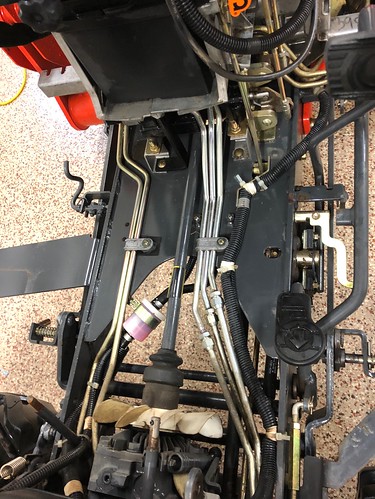 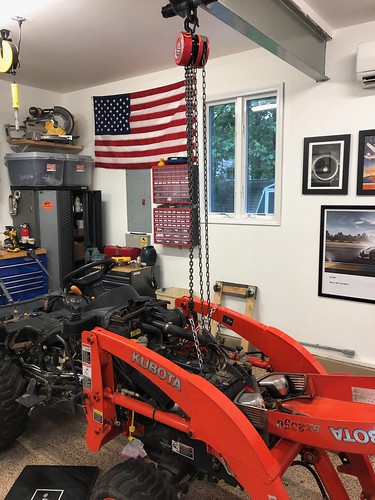 Hood bracket removed, engine moved forward and up a few inches, this is all you need. Now there is room to work in the back 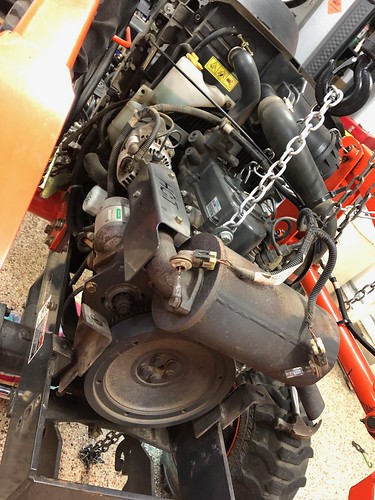 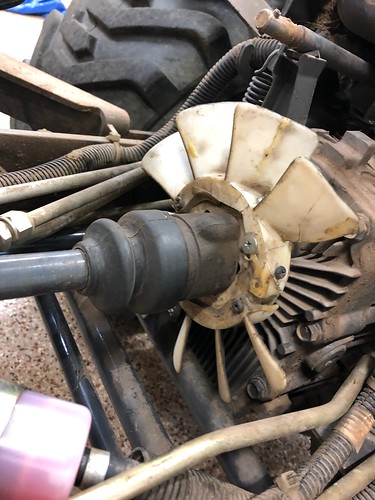 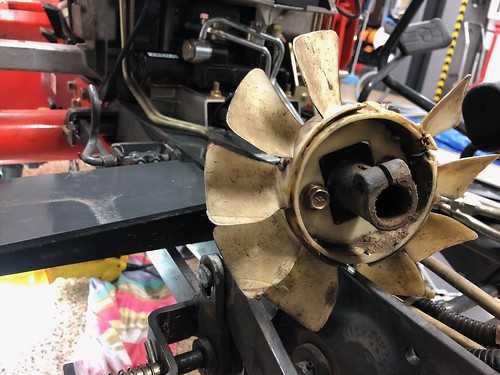 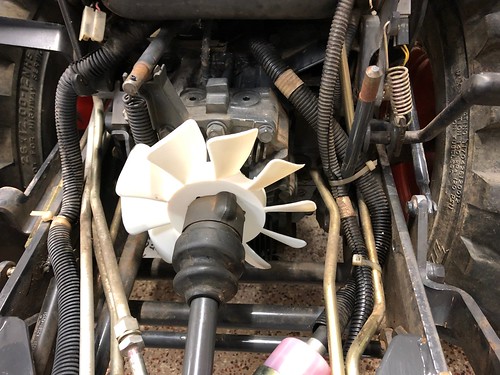 Nice write up! And nice clean up, too. So sorry you have to do it twice--I'd have bashed my head against the wall when I realized I left the clamp there. (I've done similar on other projects.)

That fan had been patched up previously by someone that didn't want to take the time to do it right!

North Idaho Wolfman said:
That fan had been patched up previously by someone that didn't want to take the time to do it right!
Click to expand...

i can understand why LOL

will add fan belt to the list, thanks guys

Going deeper while I wait for parts to arrive. I think the shipping guy at Messicks expects my daily order and has my address memorized by now.

Most of the parts should trickle in over the next two weeks. I think this has morphed from "fix a few things" into a full on restoration. The machine has 700 hours on it, was in overall "good" condition, but as you start peeling back the layers, there are always little things that catch your eye to address. 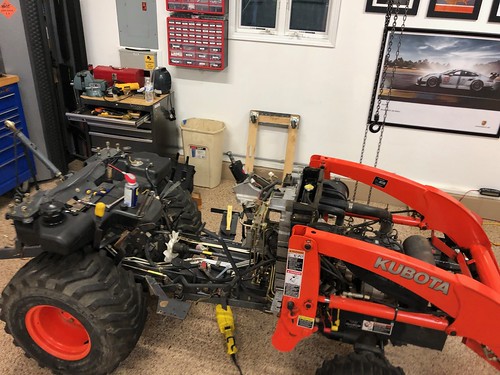 B737 said:
Gents, my new to me BX2350 has a missing fan blade on the HST. I have the factory workshop manual but its not helping me much besides showing me a picture. I ordered new fan (among other things) and would like to replace.

Has anyone gone through this, can you share any tips or pointers?

first tractor, im totally guessing here, but I think I remove the bolts at the front coupling, then can yank the whole (propeller) shaft out to get to the fan?

(tried searching but "HST and fan" were too short to qualify)
Click to expand...

I repaired my fan by making a split washer to hold the fan in place. & drill & tap the fan to the split washer. on my BX2350D tractor.

My 2021 BX2380 has a small metal shroud just under the fan. Do earlier models not have that feature?
Regardless, I've installed a BXpanded skid plate just to be safe(er).
Reactions: 1 user
G

if (IF ) there was enough money in it, a guy with a 3D printer could design/make a 2 piece replacement, that'd be simple to install from underneath in 1/2 hr or less.
I see the real fan is $12 CDN so no real savings in the plastic... it's the LABOUR that's be saved.
J