Hi - first timer - had a search but not found similar (but may not be using best terminology). We inherited a 4WD B7100 with this property - probably from the late '80s. The front wheel rims have disintegrated. Being in New Zealand the options for spares is limited. I haven't come up with anything from the dismantlers.
I have been offered new hubs+rims with the right part number, but a local tyre guy checked them out for me, taking one of mine for comparison. He said that while mine are 6-stud wheels, the new ones would only be 4-stud. He also says the source of this is not willing to divulge detailed dimensions (presumably to make it hard for folk to make their own from something else).
The old hubs have 8-stud holes, looks to me like it was either drilled to fit both 4- or 6- studs, or (my guess) it was a 4-stud and the extra 4 holes to fit a 6-stud have been added.
Tyre guy says I have two options.
1/ Buy these new ones, hope the 4 original line up for 2 of my studs and have him drill the other 4
2/ buy some trailer hubs and rims with right dimensions and he willcut the centre plate and either make up a new plate and weld in, or cut the ones out of my existing wheels and weld them in.
I am leaning towards 1/ on basis that if it works it should work out cheaper, but if it fails I have paid more than for trailer wheels, and still end up with the cost of replacing the plates.

I would sandblast the wheel pictured, and then repair the dent. It is difficult to say what the wheel will look like once it is cleaned. If you reduce the number of studs, you will be forever replacing broken studs. It needs all the studs that the manufacturer provided originally. You might have to order wheels from the states. I know that transportation is expensive, but sometimes spending the money upfront is the best resolution to the problem. You can't just drill holes for the studs, they need to be properly formed and shaped.

That rim should be repaired...You don't want to go backward! Dustyrusty is right stay with what Kubota designed. You may want look at bone yards for rims too?
P

really appreciate your comments. my photo has misled - apologies - the other wheel is much worse. i will grab a photo and see if the advice is still to attempt a repair
D

Thanks DustyRusty - yes 4wd. Thanks for how to do the measurements. I will follow up with some other providers to see if anyone has the 6-stud, but being a small country with a tiny number of such tractors I thought I was doing well to find anyone who had something that might suit.
D

Expand your horizons. Australia is only 3000 miles away, but it might be a solution for you. Also, depending on the condition of the wheel, possibly a good welder could make an acceptable repair for you. Keep asking others and you never know who knows whom.
P

Here are the photos of the more damaged rim

I'm not sure why Kubota would have put the 2 empty holes on your wheels in the lug pattern area, unless they were trying to make the new wheel supersede the 4 bolt wheel but still be able to bolt to both tractors whether 4 lug or 6 lug.

If that were the case and your 2 empty holes line up with the 4 bolt pattern of the older wheels, it would be pretty easy to convert the 4 lug wheels to fit your tractor. These wheels are not like car wheels that have a tapered seat for the lug nuts. It is a regular hole and a flat nut, meaning you can make a lug nut hole quite simply with just a drill bit.

It looks like your original rims are trashed and will be hitting the scrap heap as soon as you get new ones. With that in mind, I would buy the 4 lug wheels you can get your hand on, have someone with a plasma cutter or torch cut out the center of one of your wheels, as seen below: The wheel weight holes give a convenient starting point for a plasma cutter.
Then take this section of your wheel, 2 bolts and nuts and bolt it to the middle of the new 4 lug wheel through your two empty lug holes: I believe as this point your center bore holes (the blue hub nub visible in center fits into it) should be nicely aligned. Then take an appropriately sized drill bit and drill the 4 new holes in your wheel using the center of the old wheel as a pattern. Should come out just about perfect.
P

Well, googling around I see a bunch of tractors with 4-stud wheels, and a similar number with 6-stud wheels, so trying to figure out what it is that I need to supply to the NZ parts folk for them to source a 6-stud one, rather than going through the effort of having to do an engineered solution. Hopefully I can hear back something from them, otherwise yep perhaps I will have to try further afield and accept that things won't get mown this spring. 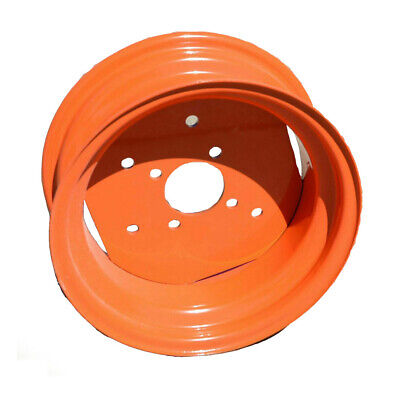 I would love to be schooled on fixing that rim! That thing is toast!
V

As far as i know the 6 lug tractors are newer, so there must be a year break where the 7100 switched from 4 lugs to 6 lugs. I would guesstimate 85-90 timeframe but someone out there who's a lot more practiced at combing the online parts catalogs could probably nail it down pretty quick.
P

somehow i ended up logged in to something called kpad.kubota.com - on there i can see a Front Wheel Hub for the B7100HST-D New Type which has 6 bolt holes, but it doesn't then also show a listing or diagram for the wheel itself, whereas i do see the wheel - with 4 bolts - for the B7100D-P

images attached hopefully for each - also posting a comparison of the catalogue to show that while the D-P one has a Front Wheel Group section, the HST-D only has a Front Wheel Hub section (i even clicked on Accessories just in case wheels were in there - 'hey do you want wheels with that tractor?')

One thing i can tell you is Kubota only has a few bolt patterns, and the 'small 6 lug' pattern appears on the front of many other small Kubota models of the era. If you could find a listing for ANY small kubota with 6lug front wheels, it is likely to be interchangeable and may even list the B7100 in some kind of interchange listing, if you can find the wheel part# from some other small 6lug Kubota. There it is right there!