Mostly finished the duck and chicken coops and runs

Finally finished the duck and chick coops and runs. Still to do, get the grass back growing although it's been so dry that most of the grass in my yard is dead.

Steps:
1. Dig down and level 1 ft below grade on the downhill side. I did it all with the bucket with a bit of assist by the rear blade. I dug down and extra foot to allow hardware cloth to be buried that deep. We also put arena sand in the space except for under the chicken coop.

That was fairly easy, but I underestimated how much dirt I needed to keep to fill around the coop. That was not all bad because wife wanted better dirt to go under the chicken coop for dirt baths. I filled back in with Arena sand which I used the tractor for, of course.

2. Layout and add pier blocks to support 4x4 posts. I did use 4x6s on the chicken run end so that I could notch both directions.

4. Add the plates and joists attached with hurricane ties after notching from purlins.

5. Add the steel roof on the chicken coop.

6. The sides and the roof of the duck coop have pvc coated hardware cloth stapled with narrow crown staples and reinforced with washers and screws.

That's and over simplification, but here's a pic. Chicken coop with run is 10x30. Duck coop is 6 1/2x4 with run 6 1/2 x 16. Duck run roof is hardware cloth but metal could be added in the future if needed if supports are added and raised on the uphill side. From what I understand that should not be required. The duck coop has a metal roof. We have 16 bantams and 2 ducks. 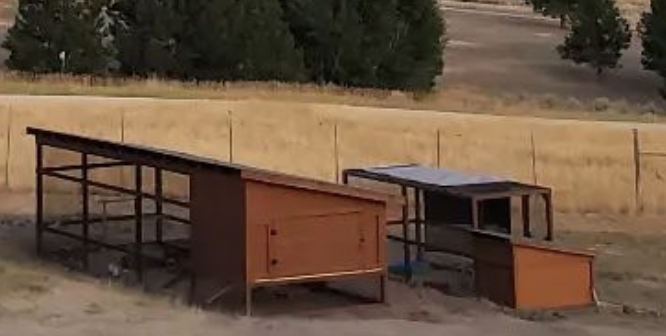 Looks good. It can be a pain. We did ours 2 years ago from a plan my gf picked. Plan was complete crap. Measurements off etc. Was supposed to be modular. Hah. Took me twice as long fixing the issues
J

My plan was just me sketching it out considering the sizing requirements with wife's input on looks. I went with a sloped roof because we live on a hill and have snow. I didn't want snow/rain to slide off the up hill side of the chicken coop. My shed is not in the picture, but it blocks the up hill side of the coop from wind, etc. Weather doesn't usually come from that direction unless it is cold/rainy/snowy.
Reactions: 1 users
C

I’m just finishing setting up my chicken coop. Got the predator apron in last week and installed the automatic door about three days ago, my coop is 8 X 8 and the run is 8 X 14. A few more items on my punch list and I will be ready for the hens. Looks like you did a great job. Nice and neat. Good work.

since I set the coop and run a couple of weeks ago, people are now stopping wanting to look at everything. Minor distractions some days. This is Georgia and about 50% of the people that live around us have chickens. I guess they still want to see how everybody else is doing it.

‘’big problem here is foxes and some irritating black snakes that stop by for eggs. Even with a predator apron and 1/2 inch hardware cloth, they still seem to find a way in the coop. I’ve gone to great pains to close all the possible entry points but time will tell. Worst case is I will make a snake trap and relocate the snakes. Foxes on the other hand are trapped or shot on site,
Show hidden low quality content
You must log in or register to reply here.
Share:
Facebook Twitter Reddit Pinterest Tumblr WhatsApp Email Link