Couple of decades ago I over revved a small Isuzu diesel and put a rod thru the block. A good volunteer engine and new rings yielded a engine that met new specks. Never could get the rings to seal. Smart mechanic told me to run a small hand hand full of Bon Ami thru it as chrome rings will never seal on a used bore even if honed. Yep worked great. Engine was running great when the body finally rusted off the engine 200K miles later. Engine was close to 400K miles.
Reactions: 1 user

JeffL said:
Couple of decades ago I over revved a small Isuzu diesel and put a rod thru the block. A good volunteer engine and new rings yielded a engine that met new specks. Never could get the rings to seal. Smart mechanic told me to run a small hand hand full of Bon Ami thru it as chrome rings will never seal on a used bore even if honed. Yep worked great. Engine was running great when the body finally rusted off the engine 200K miles later. Engine was close to 400K miles.
Click to expand...

I followed a race team that used the "hot supper" method as well as the manufacturers "suggested" break-in method and the season end results were really surprising.
Reactions: 1 user
D

Worked in the shop this afternoon for 5 hours. Finished up the fuel system
on the generator, flushed out the tank and all the fuel lines, then tightened
everything up. Lifted a fuel can up to put some fuel in the tank, and the damn
retainer ring on the nozzle broke and poured fuel all over the tank and generator.
I hate those "safety" fuel cans. Made a hell of a mess, took about 20 rags to soak it all up and get everything wiped off. Used the other fuel can and put 3 or 4 gallons in it so I could bleed out the lines and the fuel pump on the engine. Took a little while to get the air bled out of the injector lines on the engine, one is almost impossible to get at to loosen up and bleed out the air. I also made up a hitch tongue so ir can be
towed. Should work just fine.
Next item is to redesign the control box and install the generator control system.
I'm also designing a new cover to put on the inlet of the air filter to try to cut down on the intake system droning. 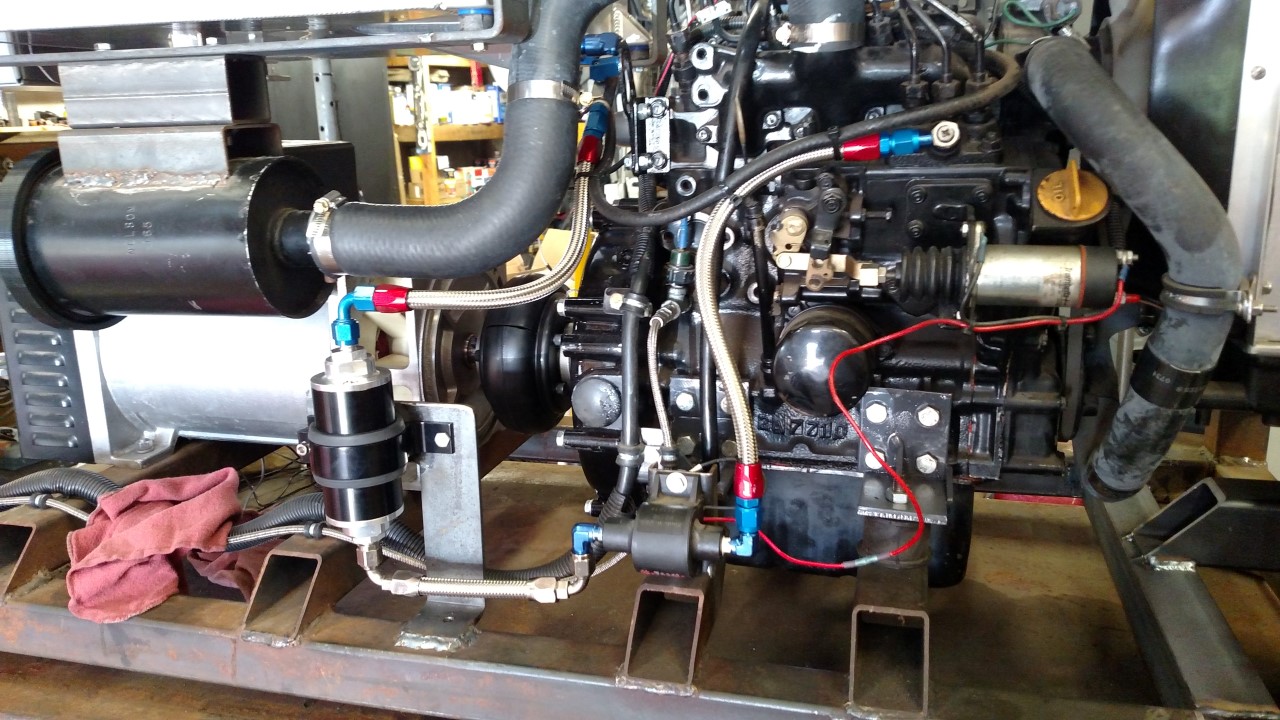 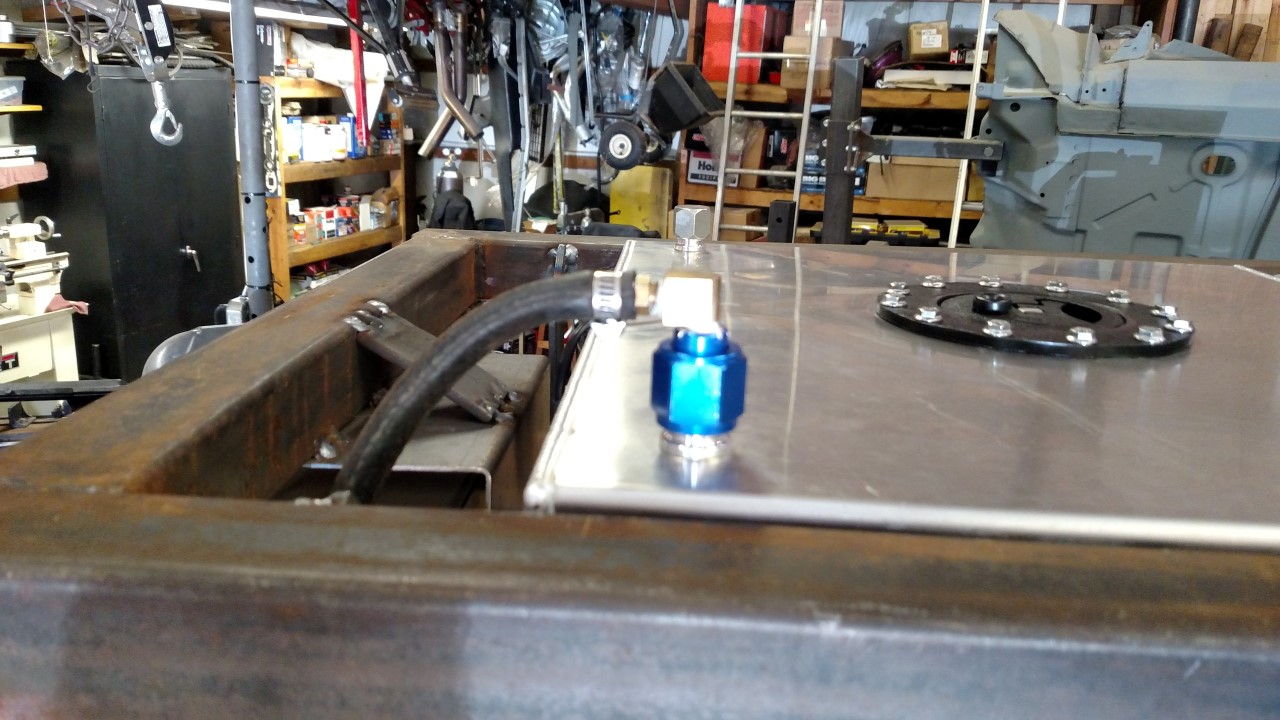 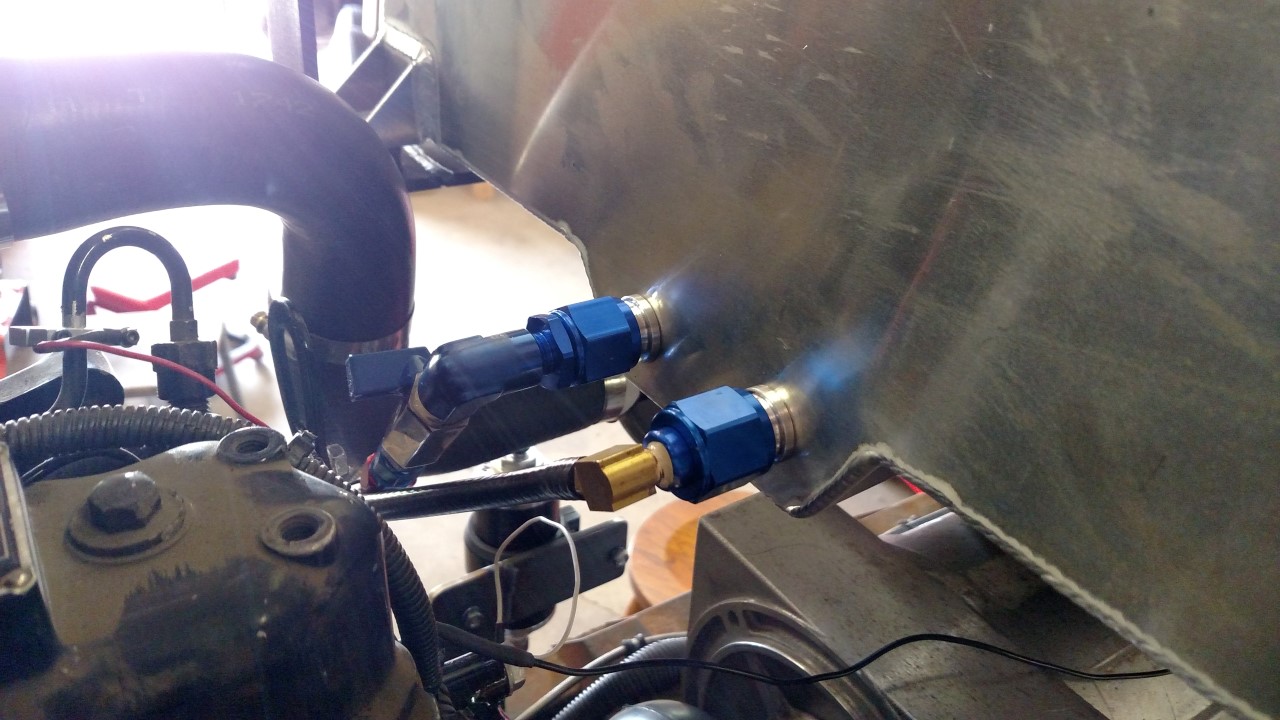 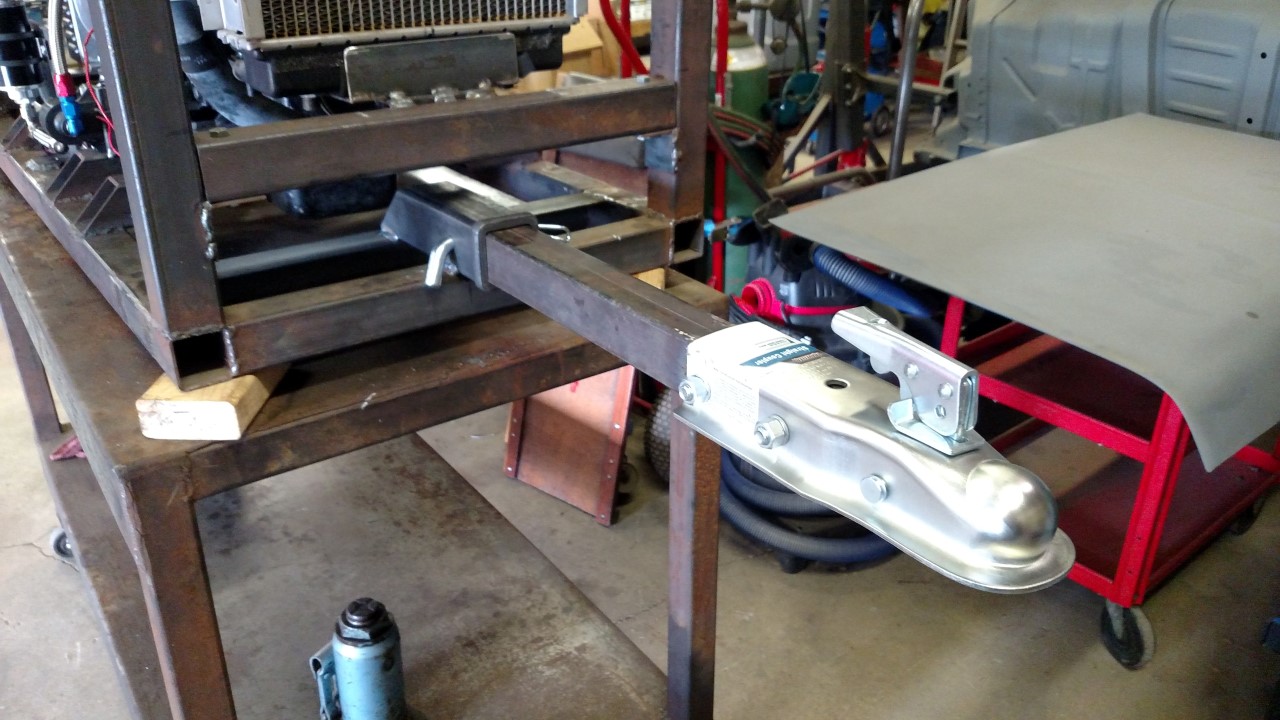 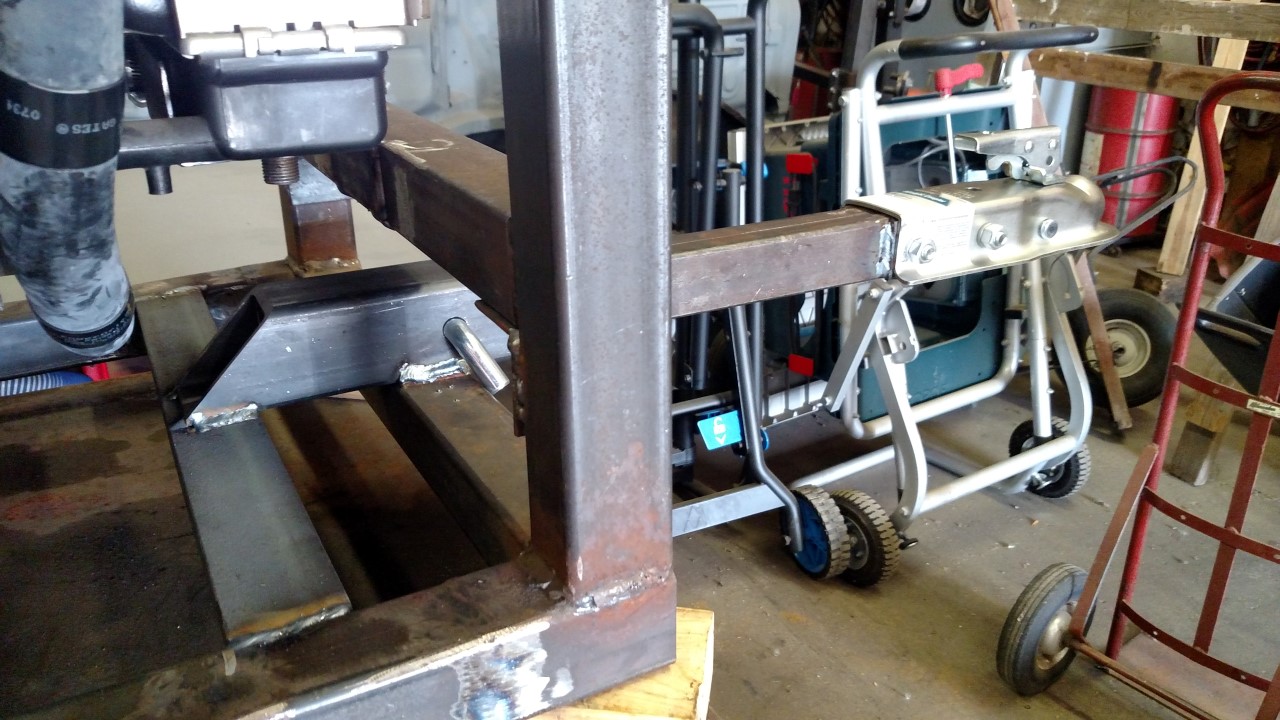 Well that is pretty cool! I've never used a coupler like that and I'm interested to see how it holds up..

I'm a bit if a generator geek.. have something like 15 old (50s to 90s) onans and a few old Kohlers and few kubota powered sets as well and some big diesel sets... just because..

I will say this make sure you have a spare voltage regulator, coupler and any other control boards needed to make it work and a spare fuel pump as well.. nothing like having a generator but sitting in the dark because a 12 cent diode, fuel pump goes bador etc and your sol..

You definitely went above and beyond with the anodized fuel line fittings and braded steel line..
D

Thanks bx. I have been doing a little work on it lately. I just got the axle assembly put together yesterday, so once I can pick it up with my engine lift (too heavy for the Kubota), I'll set it on the axle and weld in a couple of cross bars to keep the spacing correct, and drill the locating and mounting holes.

I'm rethinking using a control unit on it. The governor is set right at 3600 rpm, so I don't really need a controller to do that. I've been working on a bit of simple control circuitry using a couple of delay relays to control to power up and shut down sequences, and a linear actuator to pull the throttle open and close it. It will also have circuitry to shut it down in the event of low oil pressure or high water temperature. I might even use an Arduino board to replace the delay relays, still working on that. 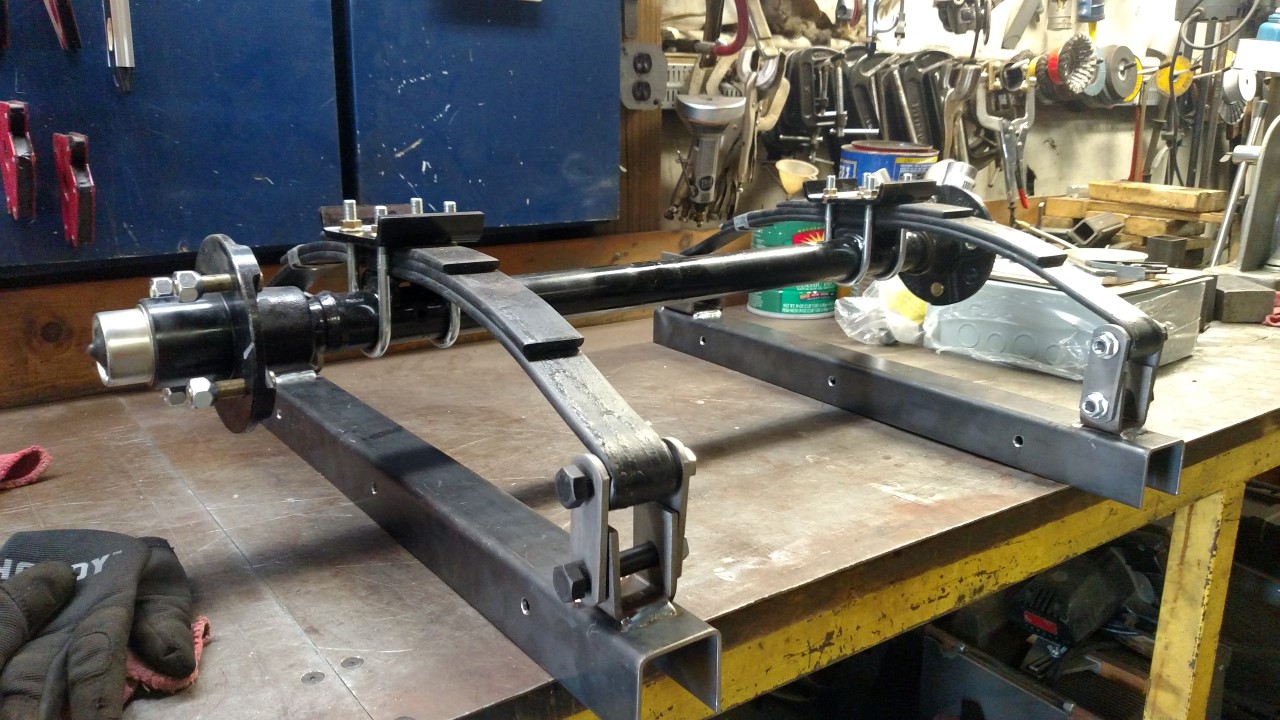 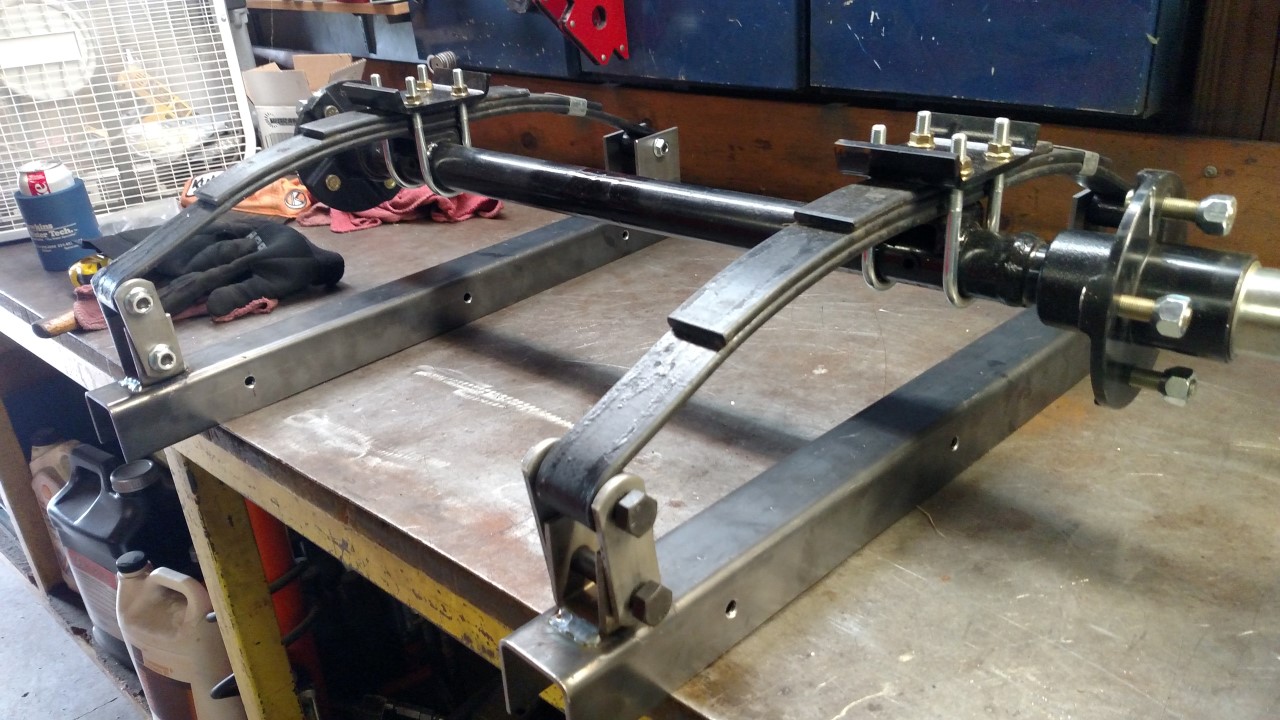 I've been working on the generator again. I wasn't happy with the control box, wanted to add a fuel level gauge and a digital tach like the one I put on my BX. So I bought a larger box, put hinges on the cover and drilled holes for all the gauges, indicator lights and switches. I also mounted 8 and 10 pole stud type terminal strips and mounts for 2 plug in relays. I made a copper bus bar that connected 4 sterminals on the 8 stud strip for a common ground point. I found a plug in automotive type relay that has a 10 second delay circuit built in to control the glow plugs at start. I has a low current rating on the NC (normally closed) contact, so I had to use it to power a higher rated relay to send current to the glow plugs. I spent a few afternoons getting it all wired up and adding two additional cables to carry all the additional circuits for everything. So now I have a 7 conductor, 4 conductor and two 2 conductor cables going to the engine, with one unused wire on the 7 conductor cable.
I also decided to add an actuator to pull the throttle open instead of just holding it wide open from start to stop, like most gas generators do. I had bought a small one a while back, but it wasn't near heavy duty enough to hold up to the vibration, and it had barely enough pull to open the throttle all the way. So, I looked around and found another one with aluminum housings and able to develop 160# of pull, plenty for the job. It has a 2" stroke, and I only need 1" travel on the shutoff lever, so I came up with a spring loaded clevis that lets the actuator extend and retract fully (it has internal end stop switches) but move the shutoff lever the correct amount. Making the mount for it was a two afternoon job, and looks kind of Rube Goldberg, but will do the job. I added a DPDT switch to the new control box with an idle and run position, so it can be started and warmed up, then move the switch to run, and it runs at the full 3600 rpm.
As I mentioned before, I'm going to have to come up with some sort of intake silencer on this thing. The intake drone from the little 3 cylinder Yanmar is really loud even with the air filter in place. My sound meter shows over 100db from 3 feet away. I don't understand why it is so much louder than the 3 cylinder in the BX. I wonder if I could come up with a 3d printed Tesla valve that would work. Hmmm.
I was going to remove everything from the mounting cage and have it powder coated, but I think I may end up partially disassembling it and masking off everything I can and paint it instead. We'll see how ambitious I am. 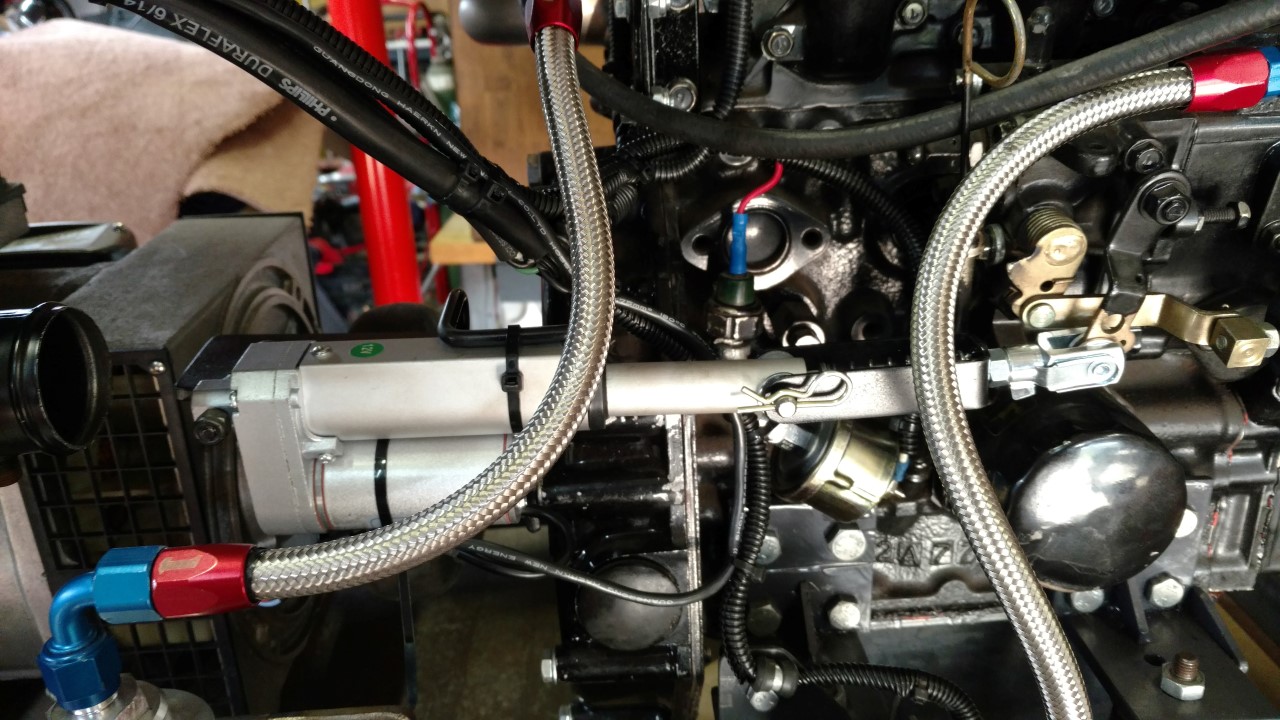 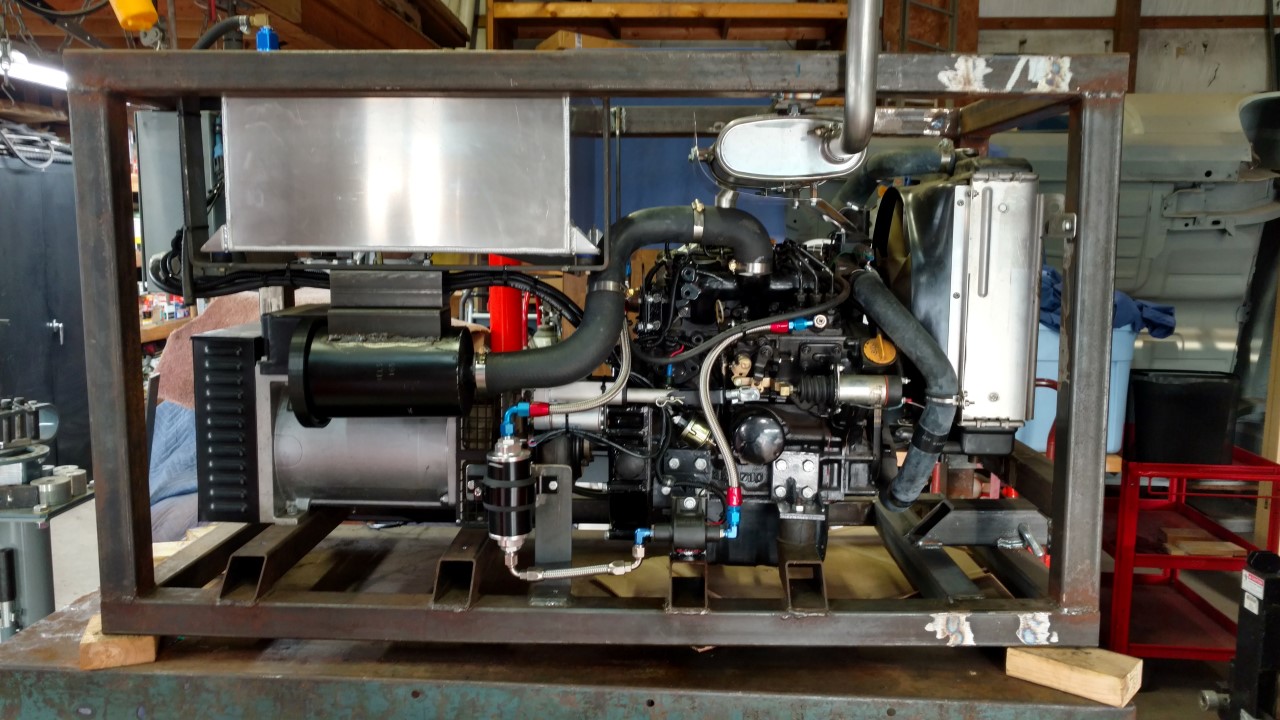 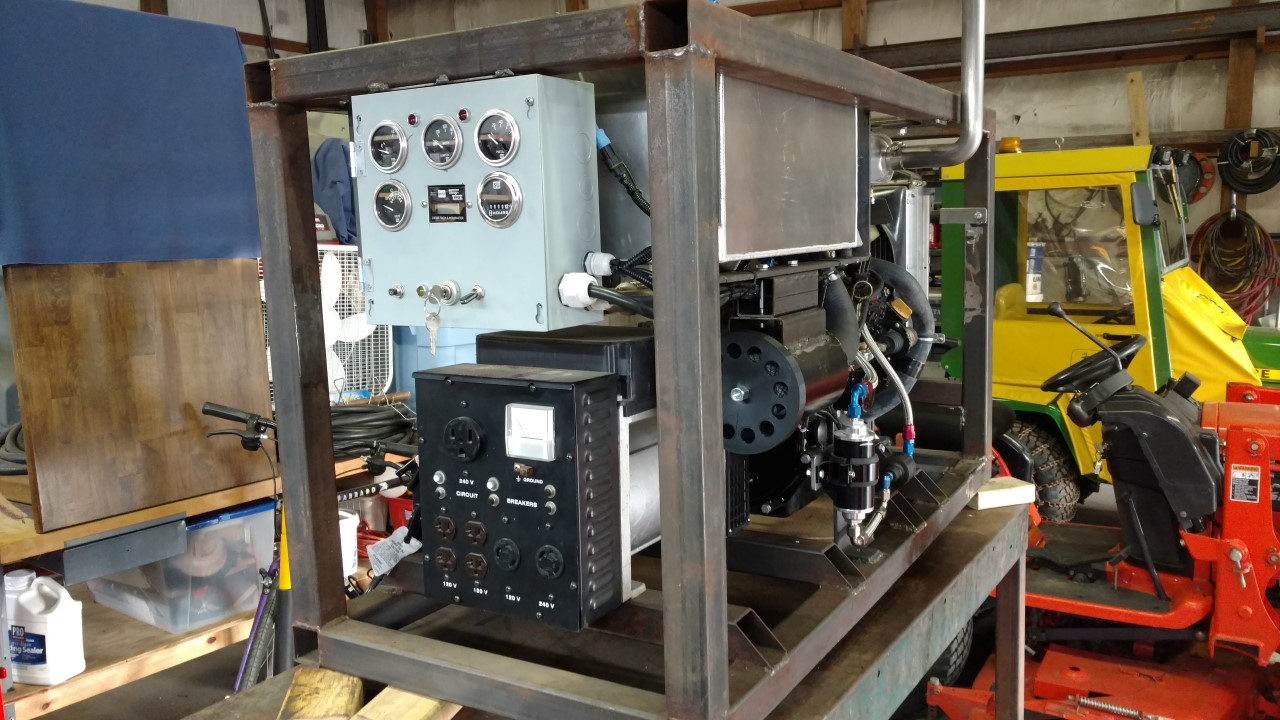 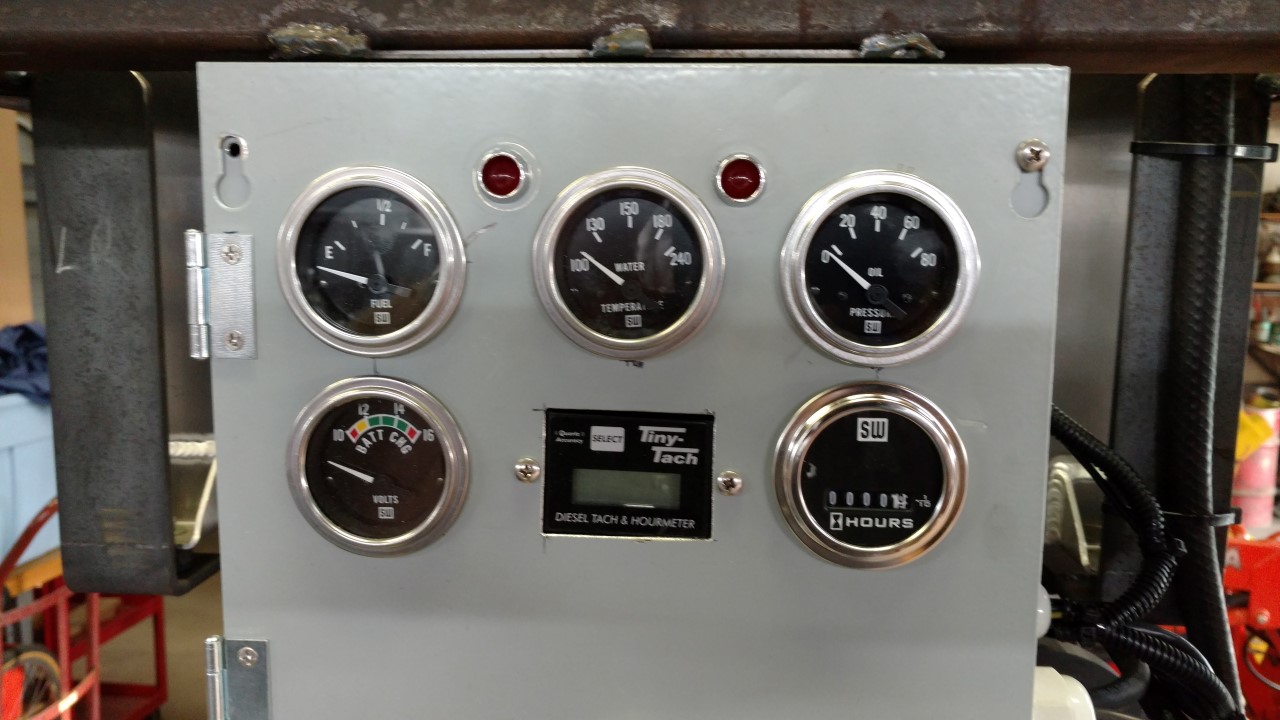 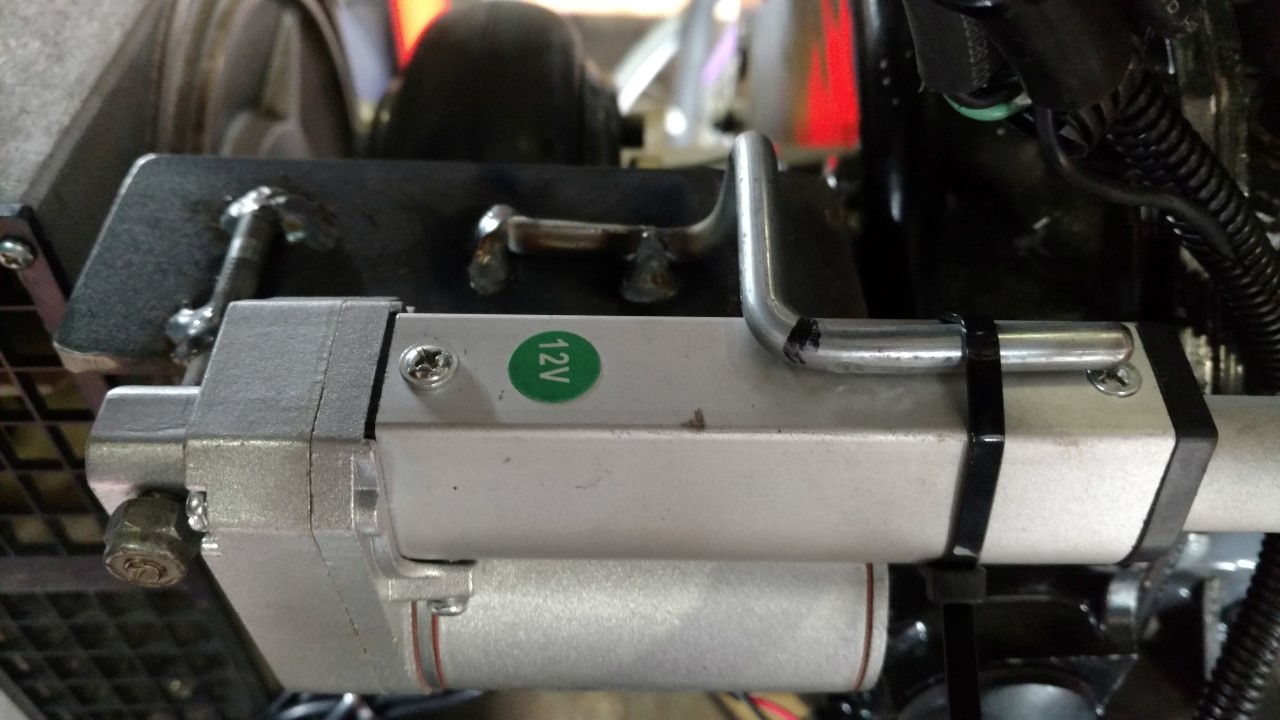