What did you do to or on your Kubota today?

Bottle 5 gallons of home brew Leffe Abbey Blonde Ale, and maybe brew a 5 gallon batch of English Porter and get it on to ferment. Ooops. Wrong forum.

Modify my el cheapo HF Haulmaster QH so that it doesn't hang up so bad on the LP BB1248. Too many bulky square corners that bind up on everything. Not much point in having a QH if I have to keep climbing up and down on the tractor and prying things around so it will actually engage the attachments. The top hook on the QH has to have a completely different angle when I switch from the chipper to the BB, so I have to spin the top link to fix that issue, too. I see a hydraulic top link and remotes in my future. I think I can fix the bulk of the usability issues with my angle grinder by just rounding some of the corners on the hooks and maybe tapering them just a bit. Something else caught my attention too, that being the guides for the lower hook latches. They should fit inside the pin pockets easily, but I noticed that they're tapered outward making them too wide and likely to stick on one side or the other. So, I might have to grind the weld on the pivot of the latch so I can rearrange them to be parallel, and I'll also taper the edges so they don't hang up too. Too many square pegs going into round holes.

My retirement hobbies are a lot more fun than my job ever was. Gonna be real hard to go back to work next month.
Click to expand...

What, you going back to work so you can collect some of that unemployment being handed out?.

Last night I used my 3901 with the forks as a lawn mower lift so I could take off the blade and sharpen it, change the oil and give it a good(ish) cleaning. I know, lifting stuff overhead and all that... It's a 21" push mower, I wasn't worried. I just figured this way I could have it high enough I didn't need to crouch...
Reactions: 2 users

D2Cat said:
What, you going back to work so you can collect some of that unemployment being handed out?.

If you mean the 'hand-outs' I've been getting for the past 45 years, yeah, I figured I can collect a little more of it before I quit completely. Been on disability since last June because I had both rotator cuffs done. Can't collect unemployment while on Disability. Didn't have a choice on the right dhoulder, complete rupture. Left one got really bad inflamed because of favoring the right, and had a small tear too. Right one in June, left one end of October, when I could take the sling off and drive with the right one. Right one's good now, but left is still givin' me fits. Not sure how, but think I re-injured it. That's all I need. See the doc again first week in June, and think I'll ask him to set up another MRI. Need to know. It's a 10 month healing process, and yeah, I probably got impatient with the left and did a little too much.

The management, business, and work environment is changed to the point I don't even recognize the job I used to love and excel at. It's a lot more of a younger man's game with less technical skill sets required, which is exactly the opposite of what old timers like me need or are suited for. I'll try to go back to it now that the local asshat manager is gone, and try to get all the bad marks off my report card that he forged, but if I'm not suitable as an employee, then I'll certainly do my best to help a lot of other companies take as much away from them as possible. They've been warned. They can have my loyalty, or they can make me their worst enemy. Up to them.

Quarterly brush pick up this week, doing some woods clean up at home 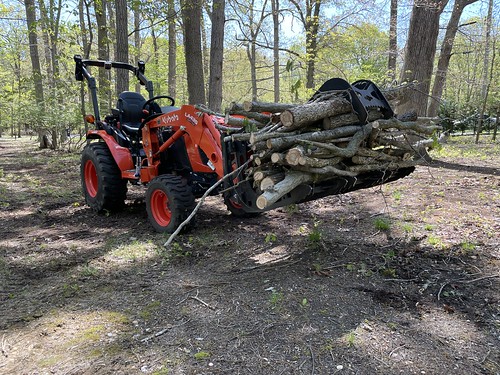 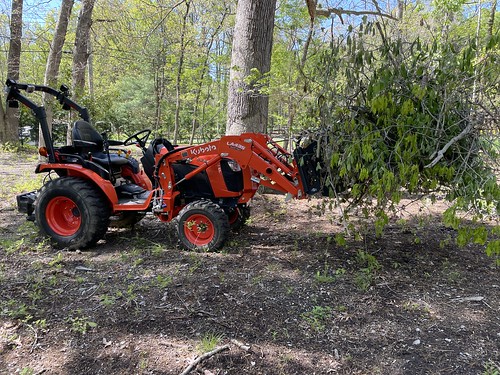 Got the Haulmaster QH modified. SO MUCH BETTER.

Left hook. Notice that the flanges for the latch pivot are spread out.

Hook is very 'boxy' Flat on top and sharp corners hang on the pin boxes on the BB.

Top hook, same problems, but top of BB hits the bolts holding the top hook in the QH.

Top hook from RH side

Top hook from above.

Note the scratches and wear marks on the top of the BB connection.

RH BB pin pocket. You can see where the QH latch flange was hitting on the inside edge of the pocket

RH hook after hogging off some metal.

Top hook shaved down a bit.

This made an unbelievable difference in this QH. I can actually hook up the BB without getting off and wrestling with it now. It's a Class 1 hitch with Class 2 hooks, there's no real explanation for the overkill in the hooks. Apparently, though, after watching several Youtube videos on QH hardware, this is fairly common. Speeco seems to be the only brand made that does not require bushings. But they cost nearly 3X what the HaulMaster does at HF. I don't mind the bushings, because they sort of protect the pins. This thing is VERY rugged with box beam construction. Probably a lot heavier than it needs to be for Class 1 attachments. The mods made it work a LOT better, and I'm pretty sure I didn't weaken anything. I didn't point it out, but I also tapered and rounded the latch pivot flanges so they will go into the lift arm pockets on the BB a lot better rather than push it off the cribbing I usually set it on. I still have to tilt it back with the top link, but with no load on it, not a problem to do that from the seat with the lift all the way up. When connecting, I go ahead and engage the latches since they're spring loaded, then let them snap into place when I lift the attachment. When uncoupling, I release the latches with the lift up, and just let it all the way down. Again, sometimes the top link needs to be tweaked to get it to fully release and let the lift go all the way down. I can see why folks like hydraulic top links so much now. Back in the day, I had no idea how much I was struggling with an old Ford 8N.

Next project: Making an adapter for my 3PH drawbar with 2" receiver hitch to pull a small hiller/middle buster for trenching. I have the plow that goes on a Troybilt Horse tiller (my mom's old tiller), and want to make something that I can use behind the tractor for trenching.

Wow, you did some serious grinding!!
F

Finally hooked up the new tiller and spent a hour tilling the gardens.
I'm really impressed with the power of my new tractor. I was able to run my tiller without any front assist...thought for sure that would be a must.
No bog down and no not enough HP, a thought that might be a issue....totally impressed and pleased with the ability to run 2 wheel drive with no problems. Just a note for folks that think they to run front assist all the time.....save your front seals from unneeded wear....in my opinion.

forky said:
Just a note for folks that think they to run front assist all the time.....save your front seals from unneeded wear....in my opinion.
Click to expand...

Can you clarify more precisely which seals are spared by sticking to only 2WD?

All of the front shafts are spinning when the tractor moves — so, I’m quite confused by your proclamation.
Reactions: 1 users

Magicman said:
Wow, you did some serious grinding!!
Click to expand...

Used a cut-off wheel to cut the big chunks off, then a flapper to get rid of the burrs and rough edges. Most of the work on the top hook was with a regular grinding disk. The difference is outstanding. Still another tweak or two needed, but it's MUCH better than it was. I can see some things about it that may become problems after it gets older and rust on the internal components becomes an issue. I'll reserve those mods for when I have a shed to work in.

Took the trash out to the road

Finally dry enough to take the M out to the log pile and restack the pile of pine sawlogs.
Then I graded the area to remove all the ruts and divots from when I was working there when it was wet

put grease caps on all the zerks
Reactions: 1 user

Spent the day yesterday pulling pine wilt affected scot pines and consolidating tree/brush piles.
While all my implements are useful and have their place I am overjoyed with what I can accomplish with a grapple.
Personal from CWIP (Central Wisconsin Invasive Partners)was on site spot spraying Spotted Knapweed one of worst invasive plants in this area when it comes to establishing native prairie. Spotted Knapweed will out compete natives and then you end up with a monoculture rather than a diverse habitat.

Due to some unexpected medical issues, I haven't been able to use the tractor recently. However, I was able to install the EA Wicked Tooth Bar today. Can't wait to clear some brush with it! 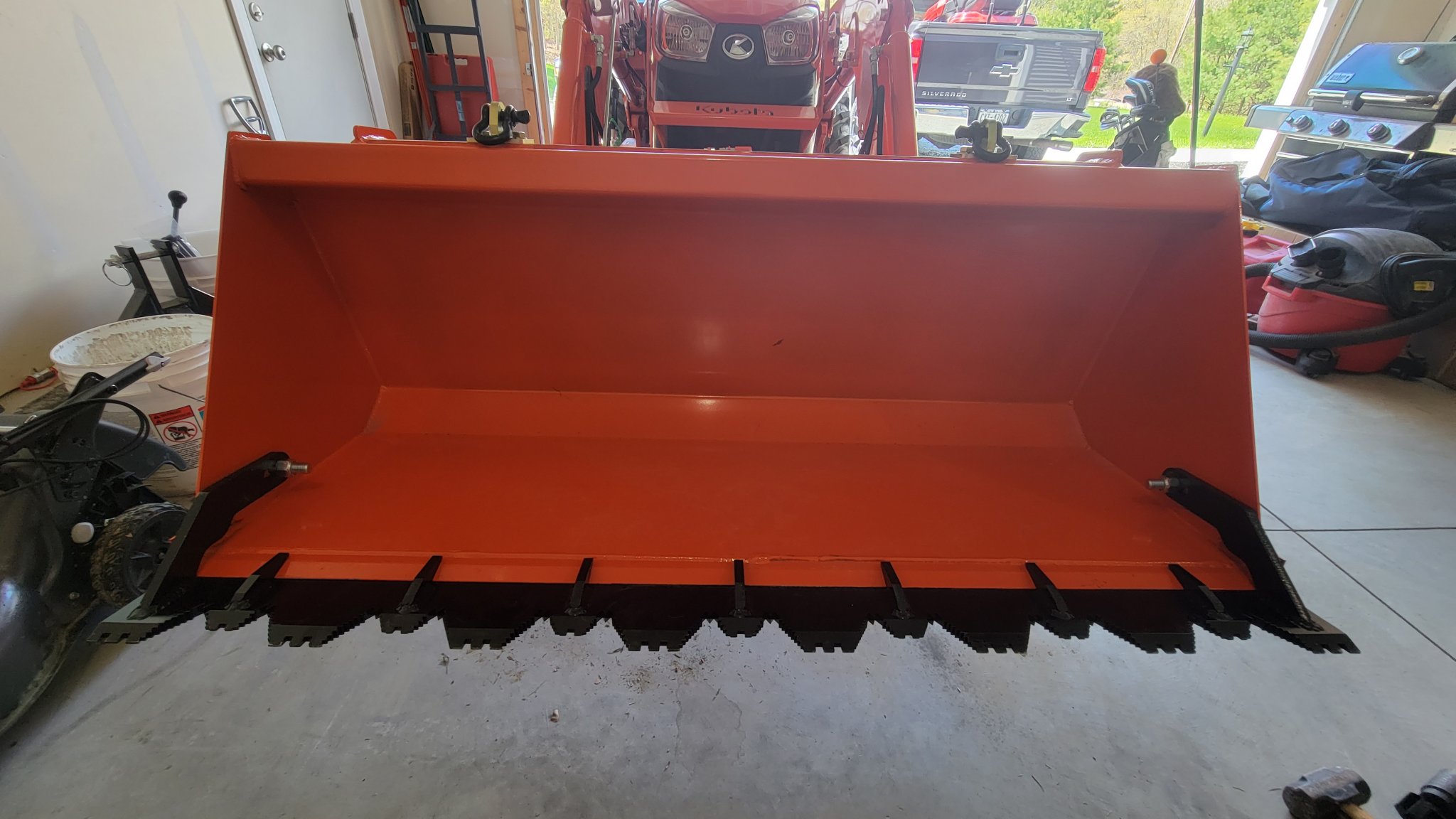 Brought the old ‘Moline out of hibernation.

The Kubota served as the tender tractor .... 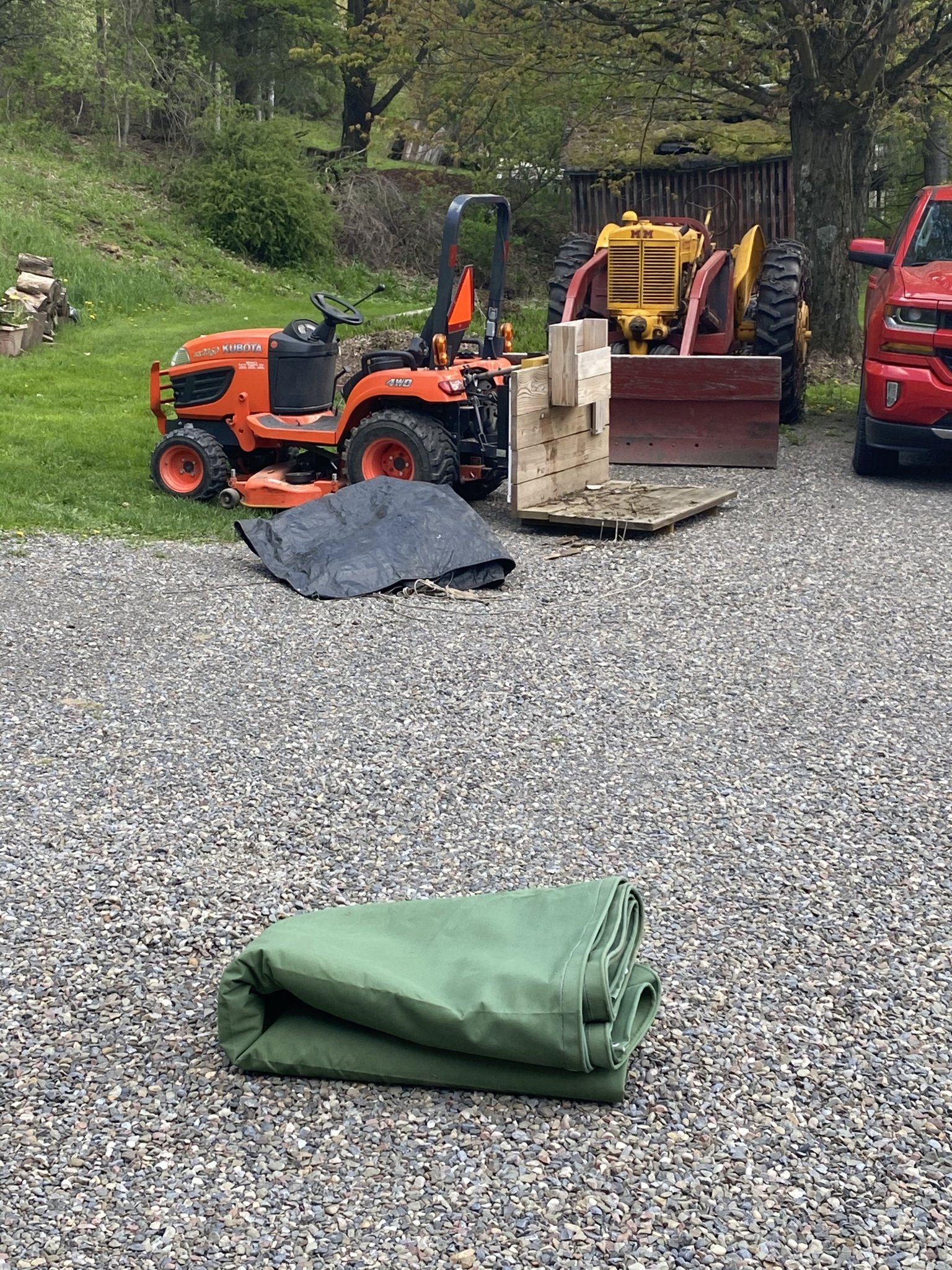 Dressed up 200' driveway with 11 yds gravel. Have a yd left for some touching up.
1st big job with my new to me rig. Like it.
Reactions: 2 users

je1279 said:
I was able to install the EA Wicked Tooth Bar today.
Click to expand...

Dry enough to go dig in the "pond gravel pit".
Skivved off a few loads of gravel from the "delta' that forms every spring from gravel washing down the little creek that passes under the town road. 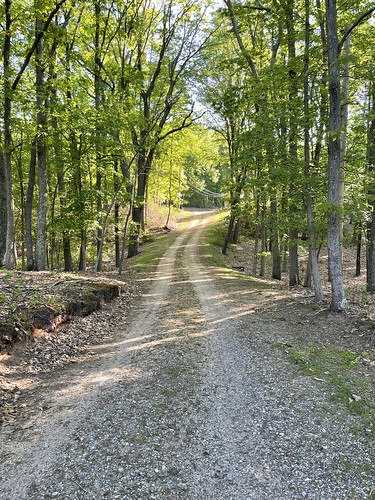 all prepped with box blade mmmmmmmm 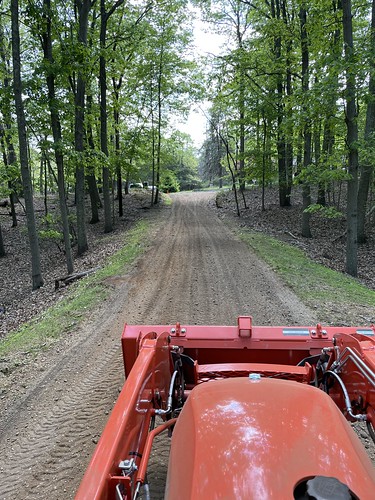 spread 45 tons of stone with the rake, it still could have used more! 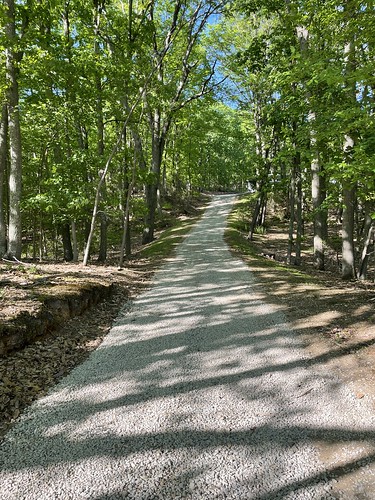