We are no longer dry

We had been on the drier side lately, but we have a storm system that has moved in an worked on replenishing us (rain totals so far in chart below). Now we have flashflood warnings all over, but very thankful for the rain.

Forecast is calling for more rain over the next three days. 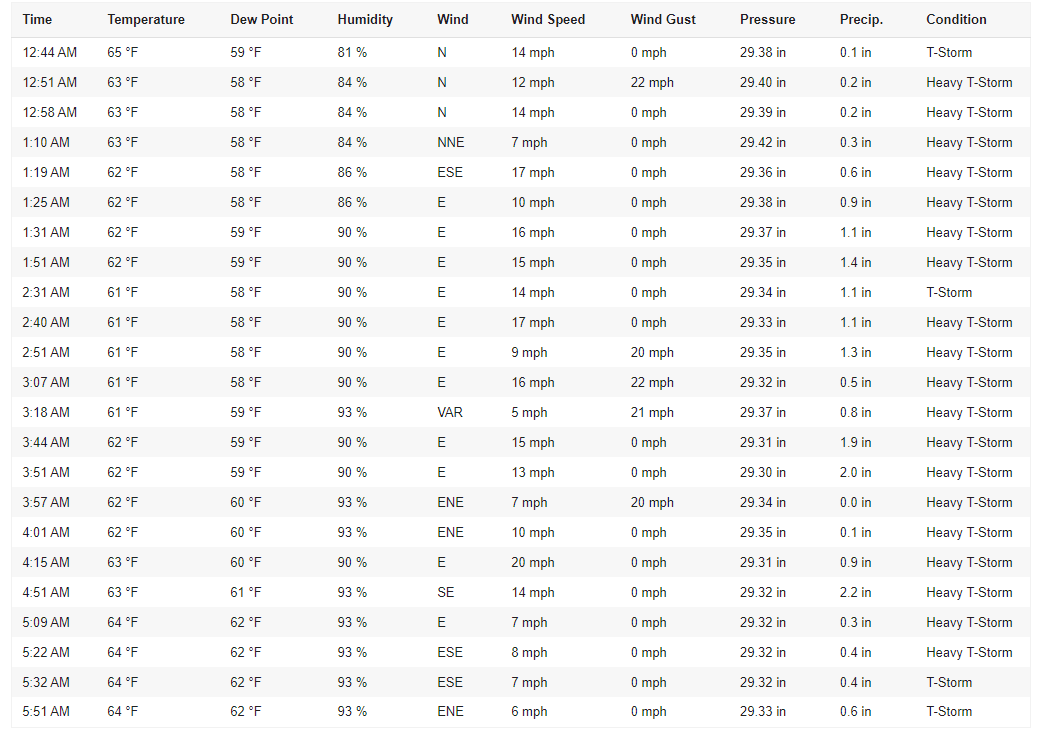 All the rain is creating issues in St. Louis:

At 3:30 a.m., first responders blocked off all lanes of eastbound Interstate 64 near Grand. It reopened just before 7 a.m. Tuesday. On Interstate 55, drivers were diverted off the highway before Potomac. Eastbound Interstate 44 is the third interstate affected. All lanes were closed at Hampton

Drivers would have to find an alternate route on eastbound Interstate 70 near Natural Bridge and Jennings Station Road. In addition, Interstate 70 was closed in both directions near Mid Rivers Mall in St. Charles.

Cpl. Dallas Thompson with the Missouri Highway Patrol recommended drivers to not travel on interstates in St. Louis and St. Charles counties until after the morning commute to allow the water to recede.

Several streets in University City, Maplewood, and St. Louis City are deemed impassable. News 4 Damon Arnold spotted several cars that were tucked in the flooded roads with water up to their door handles. 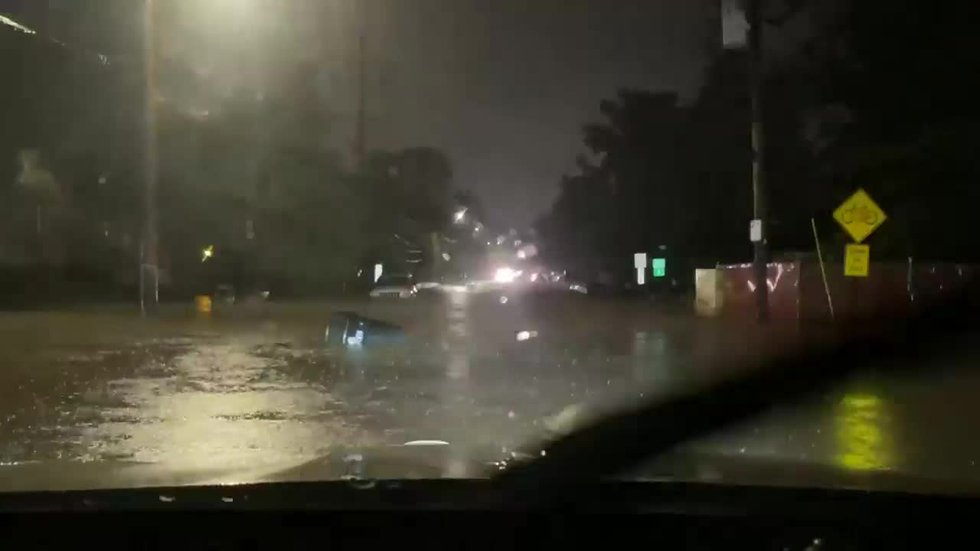 Looks like this one is moving south of us along the Ohio River. Supposed to drift north with rain through the weekend

Glad to hear that some parts of the country are getting some badly needed rain.

Where I am (Deep East Texas) we have been in a significant drought.

I vaguely remember what rain looks like, but sure hoping to get some in the next few weeks.

What kind of daytime temps have you guys been experiencing? We've had multiple days in a row well over 100°F.

The storms that came through CT yesterday pretty much missed us completely. Still watering my new plantings and lawn so I don't lose them
D

We got .8 through Monday night. 20 miles south, at the farm, not enough to dampen your cap. 20 miles East, near LarryBud's farm, they got a couple of inches. It was just building up as it was going East.

Flintknapper said:
Glad to hear that some parts of the country are getting some badly needed rain.

Where I am (Deep East Texas) we have been in a significant drought.

I vaguely remember what rain looks like, but sure hoping to get some in the next few weeks.

What kind of daytime temps have you guys been experiencing? We've had multiple days in a row well over 100°F.
Click to expand...

We had been under a heat advisor, temps in the upper 90s and heat index values of 105. This morning it is 63 with all the rain and forecasted highs this week in the mid-80s.

NWS is reporting over 4 inches of rain since midnight with some areas seeing 6-8 inches and it is still raining.

Forecast is for more rain tonight through Thursday. We usually get 4 or 5 inches of rain total in July, but instead we got that much in less than 24 hours (rain started just before midnight here locally).

Local news just put this out:


Weather Alert: Extreme flash flooding in parts of St. Louis and St. Charles County, avoid flooded out roads and turn around, don’t drown! Find a new path if you encounter a flooded road. Flash flooding is occurring in parts of the St. Louis metro after a record rainfall and more rain falling this morning. 6″-11″ of rain has fallen, and it is not over yet. St. Louis has over 8″ of rain and it’s still coming down, which beats the previous record for 24-hour rainfall of 7.02″ August 19th-20th 1915.

Heavy rain will taper off by late morning, but the damage has been done with many flooded roads this morning. Also, small rivers and creeks will rise very rapidly, especially be careful around Dardenne Creek in St. Charles County which is forecast to rise to the 2nd highest level and near the record from 2008. St. Charles and St. Louis County creeks and rivers should be avoided this morning.
R

I mowed yesterday afternoon because I was on the edge of the warning area (next county south was in it) but no rain here besides the badly needed 1.1" two days earlier. The ground still has large cracks because of the dry summer that the rain didn't phase.

With this dry weather, my new Kubota F2690 may get here before I have to mow again with my Deere 955

At least between decent moisture down deep and a bit of watering, the peaches have done well. This winter the trees will get a severe pruning after I let them grow out from the ice storm damage several years ago. My daughter has gone from picking to making preserves this morning and we are awaiting the arrival of a hand crank vintage ice cream freezer I bought on ebay to replace the Chinese electric garbage that I bought a few years ago so we can turn some into peach ice cream. 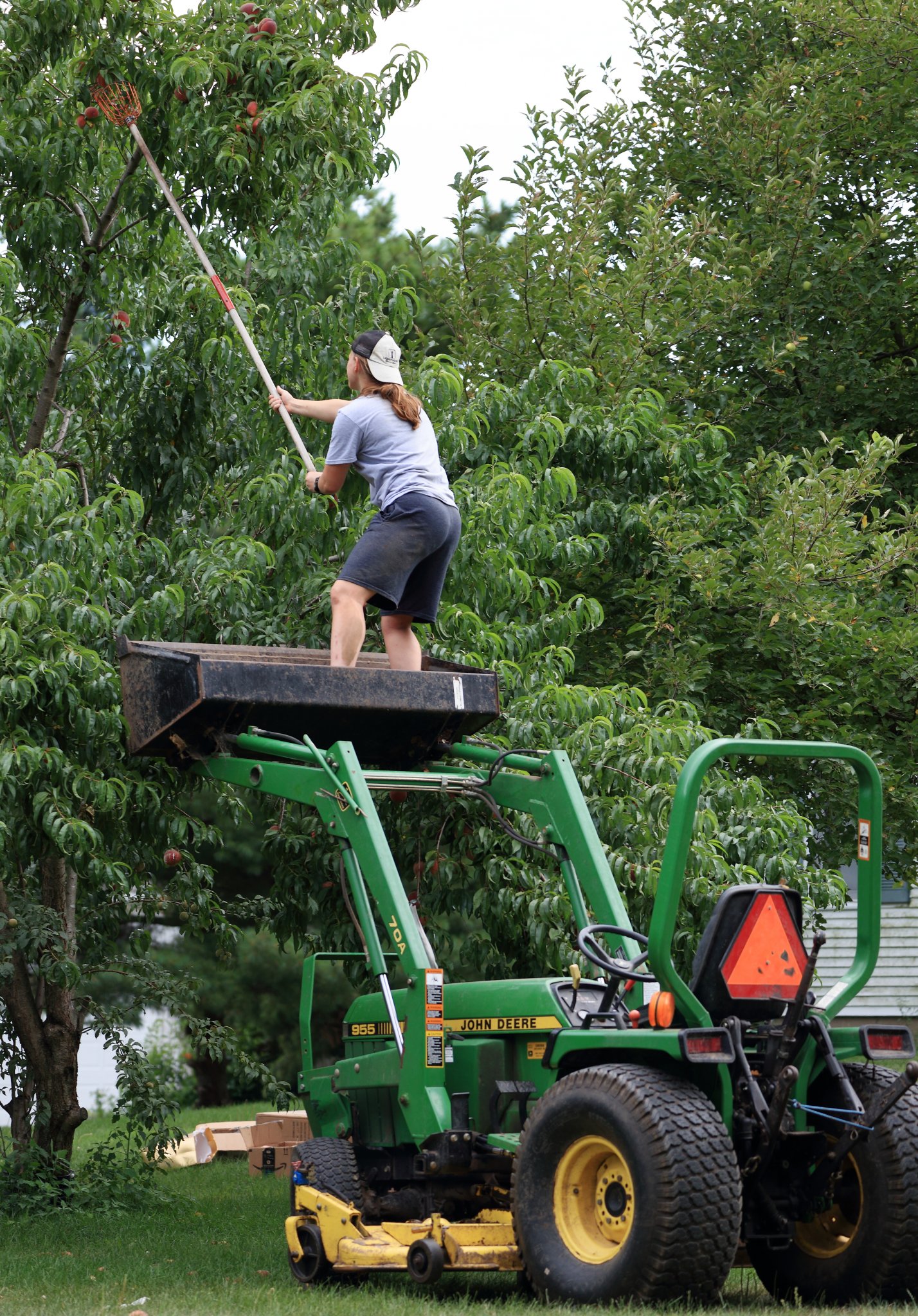 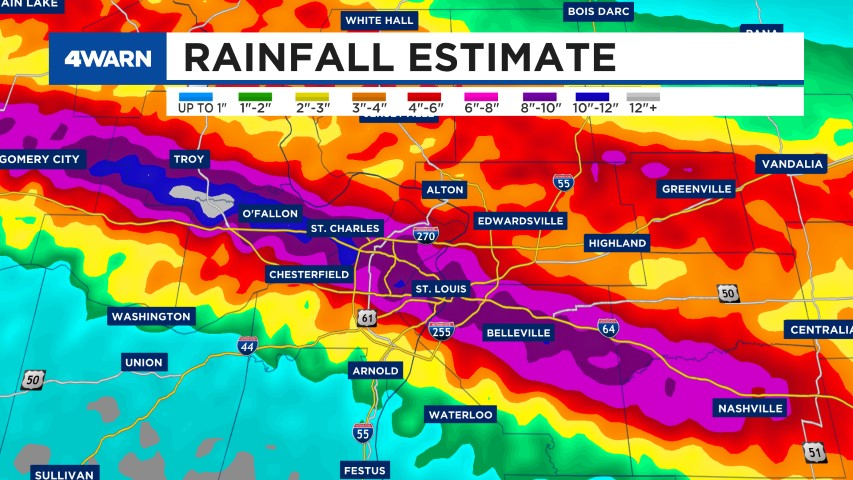 That is a really narrow band of extreme rain, looks like the classic train of storms following the same path. We had that experience twice in one week in Tazewell county 7 years ago. It was the first time in my 30 years of living here that I saw the creek in the pasture rise high enough to put water over the road and I was very happy my house sits on a hill 400 feet from and 30 feet above the creek bank level so that the basement stays dry.

25 miles west of St.Louis so far .25” but more rain predicted thru Thursday. We definitely need rain but not 8” in less than 24 hrs.
M

Glad someone is getting rain but I don’t wish anyone to get flooded, either.

Last time my land in central Texas saw rain was 0.19” the week of June 4. Pretty much upper 90’s to 100’s since then, too. We get this every summer for a week or two but never this long.

Stare at the dry grass wrong and it’s likely to spontaneously self-combust.

Wishing we had some rain coming our way in south eastern PA. We had what amounted to a sprinkle the other day but didn't even make the patio more then damp and dried up shortly after. I Hate mowing grass so I don't mind it's not really growing, but the garden isn't doing great either unless watered heavily everyday. At least the heat finally broke for us up here.

Woke up to more thunderstorms this morning. Went out yesterday afternoon and picked as many tomatoes as I could, afraid I will start losing them to splitting due to so much rain.

The local weather underground site reports 7.99 inches for the 24 hour period yesterday for our area and it is reporting a little over an additional 1.5 inches of rain since midnight.

Checked with the neighbors at the farm and they said they had received just over 4 inches there as of yesterday afternoon.

We have more storms predicted for tomorrow. 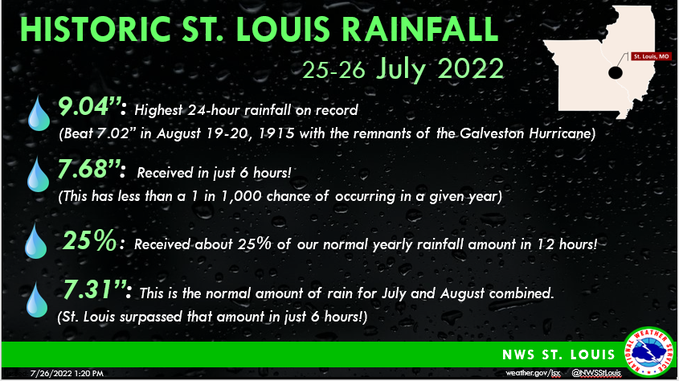 The rain seems to be splitting when it hit the mountains here and does one of 2 things either splits or evaporates lately. I mean it has been so hot and dry here, the rabbits will go and lay down in the garden when I turn the sprinkler on. One day there was 7 of them just laying under the sprinkler
Reactions: 1 user

Here we go again, my phone just went off with a warning.

* Until 730 PM CDT. * At 321 PM CDT, Doppler radar indicated thunderstorms producing heavy rain across the warned area. Between 1 and 2 inches of rain have fallen. The expected rainfall rate is 1 to 2 inches in 1 hour. Additional rainfall amounts of 2 to 3 inches are possible in the warned area. Flash flooding is ongoing or expected to begin shortly.

We got our first real rain today. Been alternating between a nice soaker and down pours. Hopefully things won't be so crispy.

We are now in a heavy monsoon rain pattern in New Mexico (and Arizona) so we are finally green again with temps in the 70-80s.
Reactions: 1 user

Well, my alert on my phone went off for thunderstorm watch and flash flood watch.

excess of 2 inches per hour are expected to develop between

late afternoon and early evening today, and will expand in

coverage as they spread south during the evening and

rates, multiple rounds of thunderstorms are likely to move

over the same areas repeatedly across localized areas.

Widespread rain amounts of 1 to 3 inches are expected, with

locally higher amounts between 3 and 6 inches possible as

well. While the flash flooding threat may be localized and

conditional, the threat may be locally higher in areas that