I saw a few videos of people making their own wood chipper and I decided I'd try to make one using stuff I already have. I recently made a log splitter that works great and decided I'd integrate the chipper on it. But that project has failed so I thought I'd share my experience.
Here's a video of the first run:
The first problem I had was to drill holes in the shaft precisely enough to fit the blades: 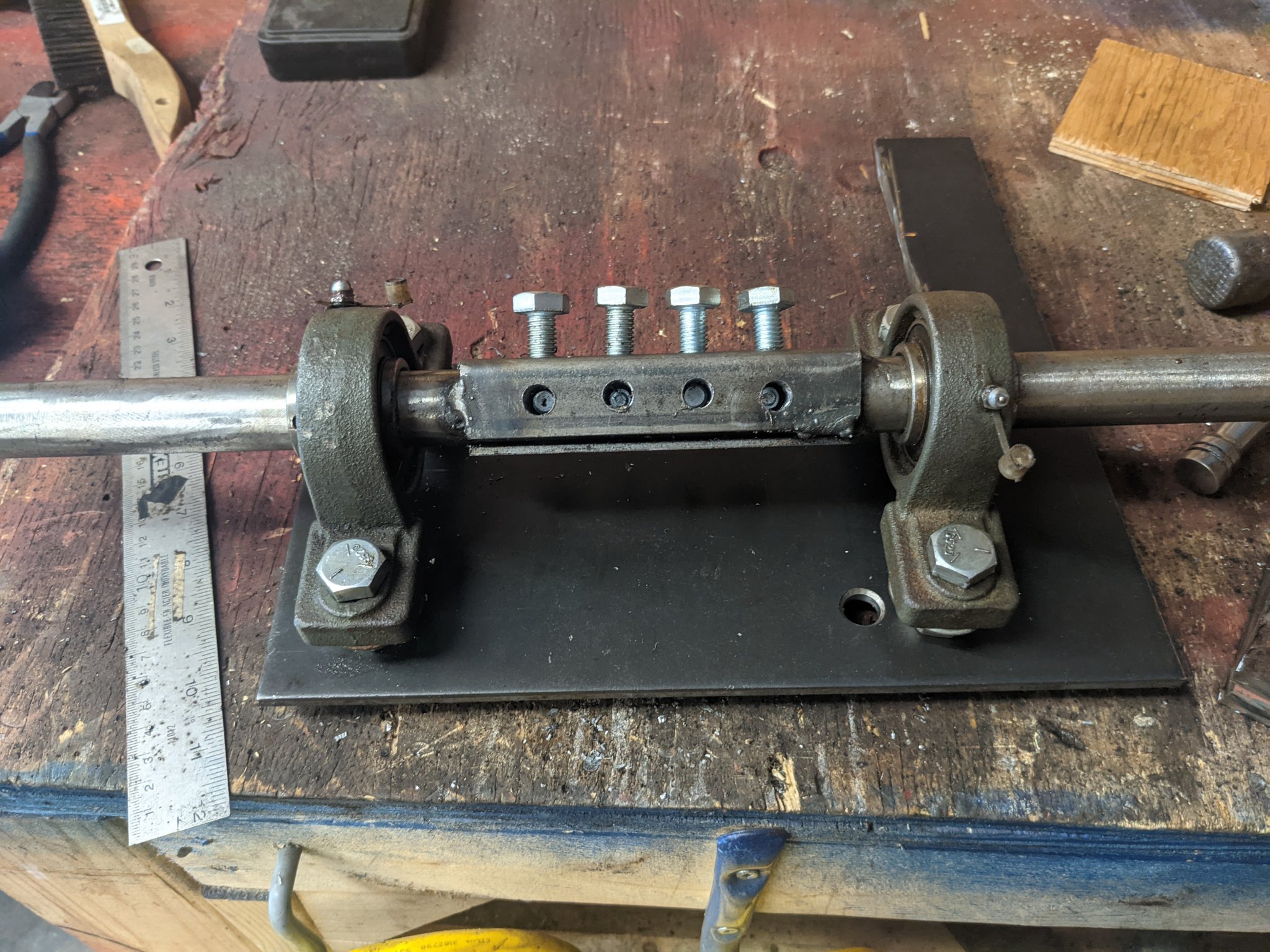 I blame this on not having the right tools. But I'm sure that I can rig something up with my press drill to get more precision. That's not a big issue though because I was still able to align the holes for the blades. 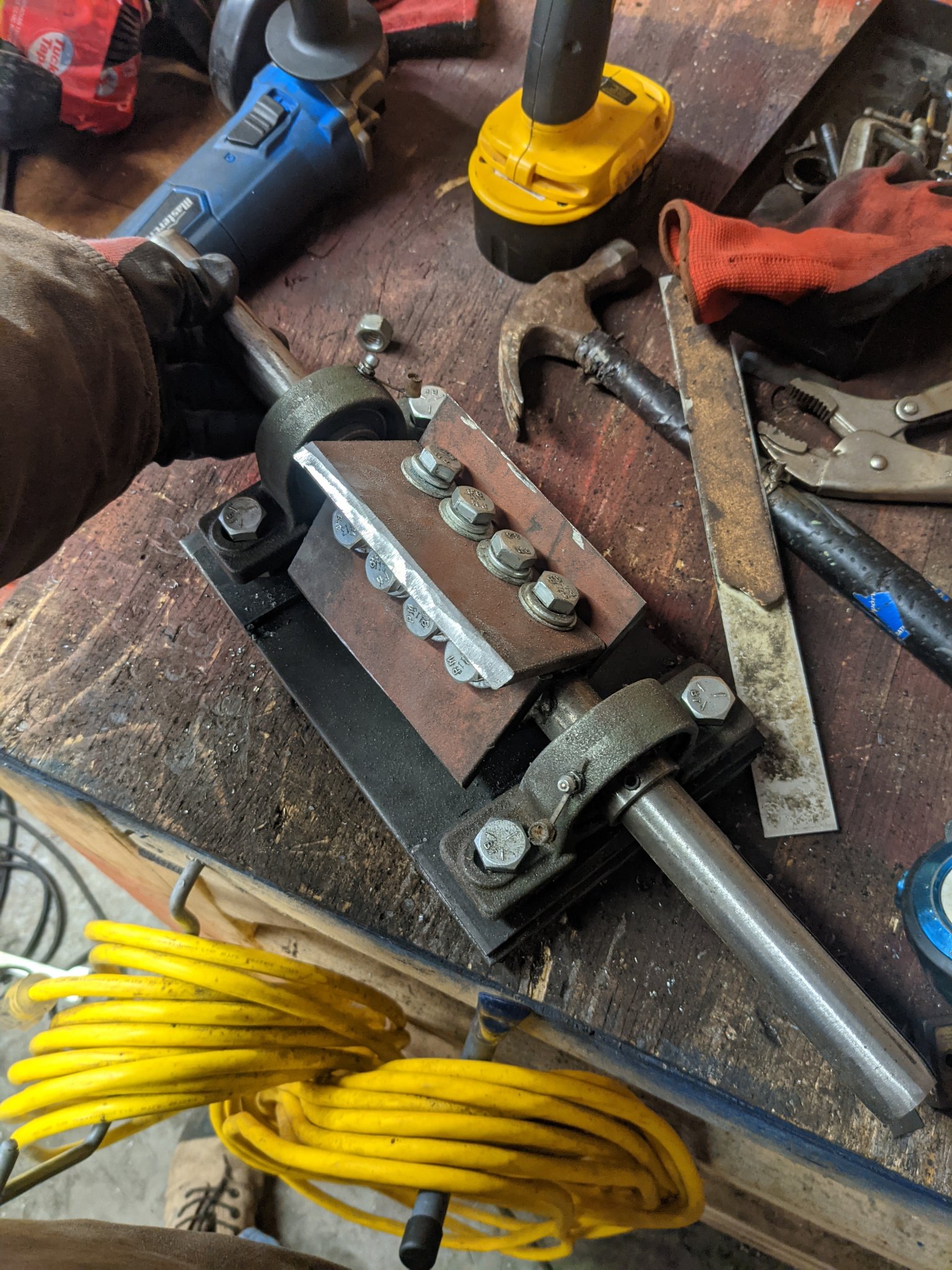 Then I mounted this on the splitter with the driveline under the beam, going to the tractor. This works just nice. The clearance between the splitter and the chipper is 12" so it's good enough for me. 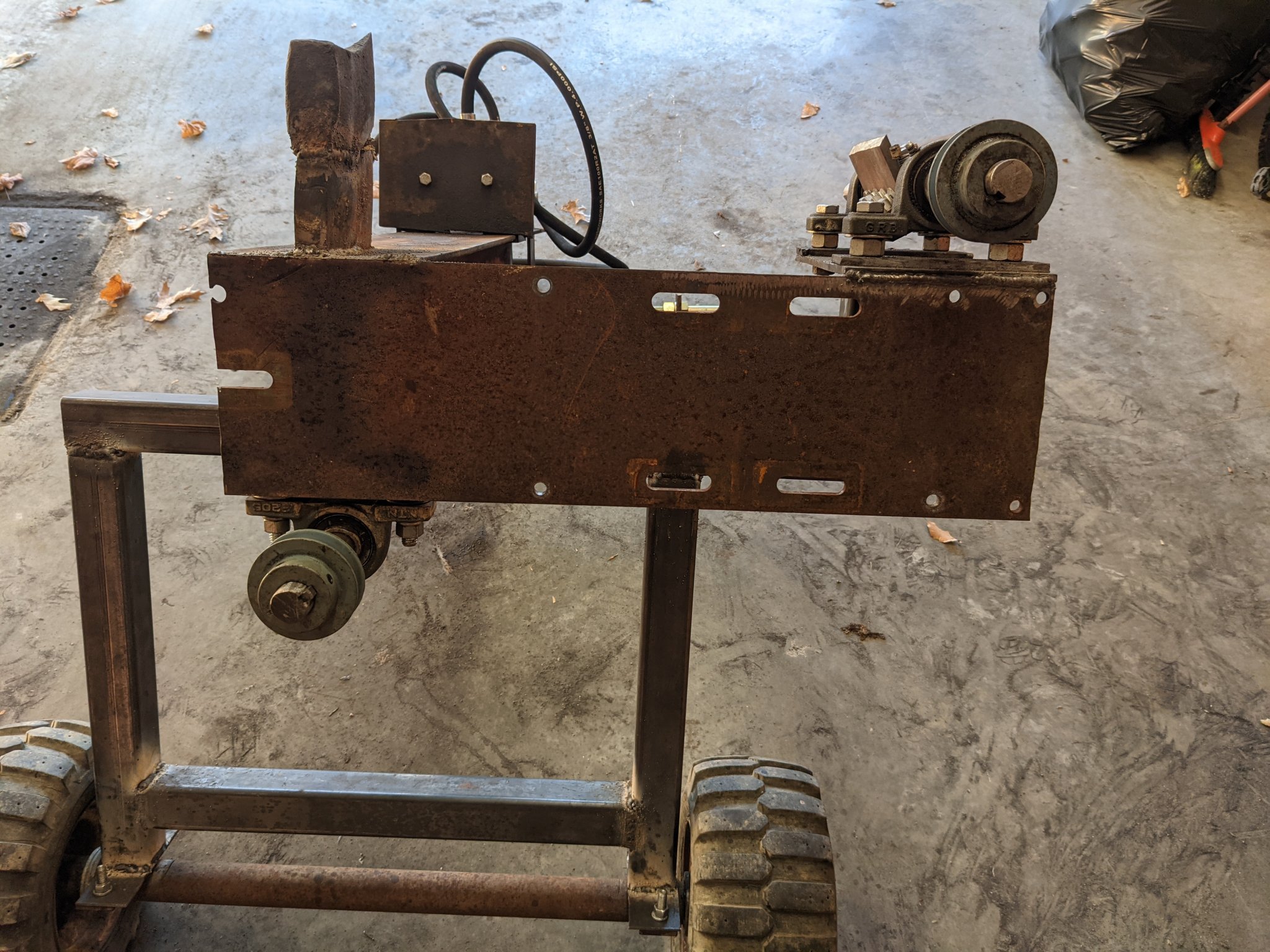 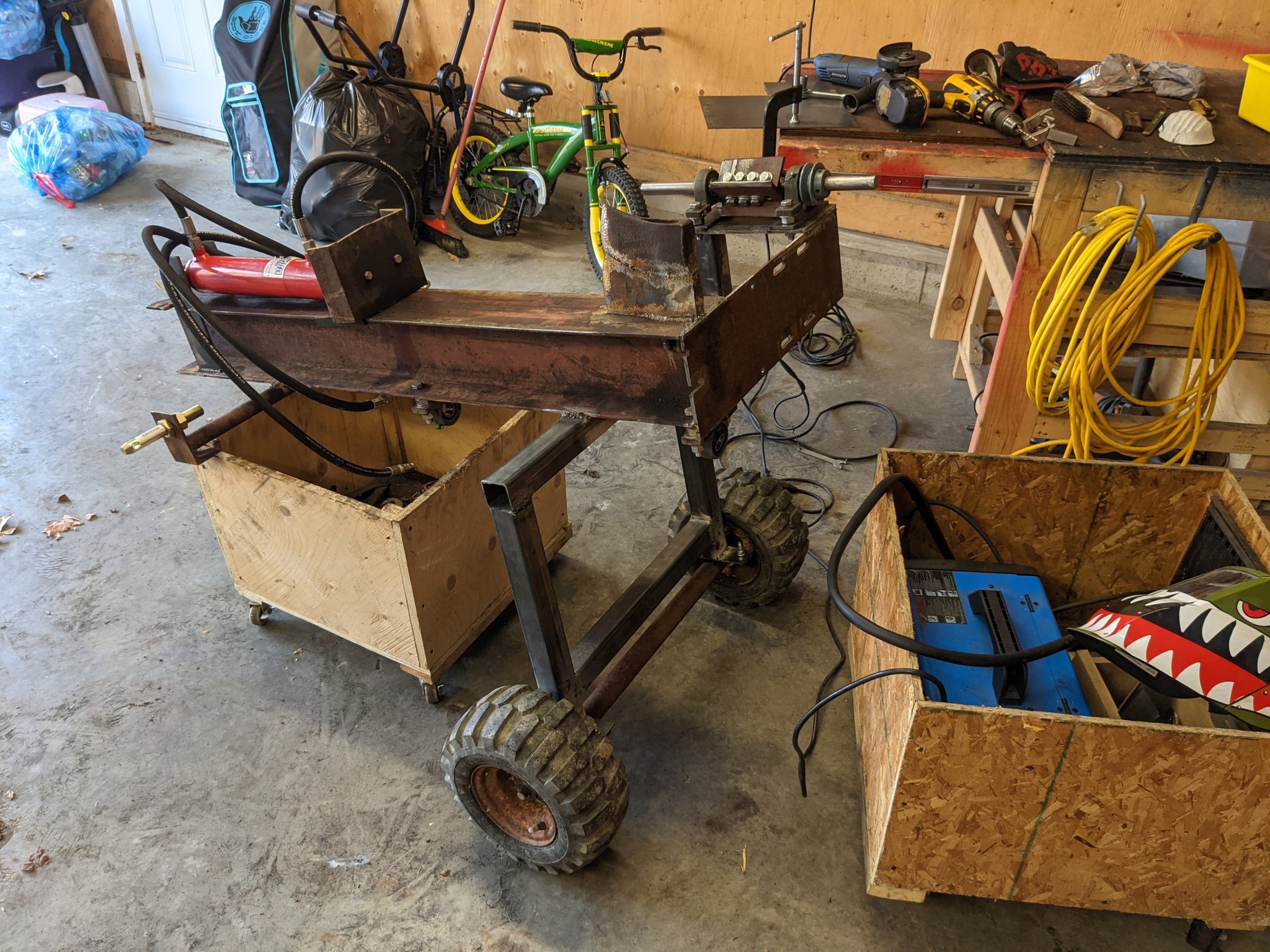 But the issue with that was the size of my pulleys, The belt started slipping as soon as I put a branch in it. No big deal, I changed them for 16" pulleys that I already had. But then what had to happen did happen: the shaft on the chipper bent. I'm using a 1" steel bar for the shaft and that was not enough. So that kinda killed the prototype. The bar bent, so one of the blades touched the bottom of the chipper and halted the shaft, and the bolts on one of the pulleys sheared. I'm using a QD bushing on the large pulleys. Those bushings have 2 1/4 bolts (I'm using grade 5) but that was no match for the raging force of the PTO.

So now I'm back to the drawing board. Here's what I think I'll do:
- I'll keep the driveline as is, with a 1" steel bar and a 16" pulley at the end. But I think I'll drill 3/8 hole in the the pulley and bushing and use 3/8 bolts grade 8.
- I'll build another chipper with a 1.5" steel bar. But I don't wanna have to buy another pulley so I might get it machined to have the last 4" narrow down to 1" so that I can use the same pulley.
- Instead of using 4 bolts per blades, I think I'll use 3 longer bolts that go straight across (so the holes in the shaft are non-threaded) and the bolts would hold both opposing blades.

BTW, the blades are made of 5/16 steel. I know I'm supposed to use something thicker and harder, but I'll see where that gets me. I can always make new blades later.

As much as I love bodging...have never built a chipper(owned 3 or 4 though..)
1st, buy a set of proper chipper blades,say from Vermeer.
start there. Unless you use the correct grade of steel AND properly heat treat them, you'll be lucky to get a couple twigs chipped before your 'blades' get dull.
2nd, download or look at a 'parts list' for chippers based on size of branches you want to chip. 1" shaft is tooo small. 1.5 is 'small', 2" would be nice
3rd shaft MUST be balanced !!! As wel as very well supported.
Then there's the 'safety' thing.. once built be 100% sure, when it explodes YOU and others will NOT get hurt,maimed or killed by the shrapnel flying off.....
then there's the how many trees makes a pile of chips 'detail'..answer is LOTS !

Bottom line, it's be easier,cheaper, SAFER to stock up on branches then rent a chipper for 4hrs, maybe a day. Maybe make a deal with local arbourist to chip and dropoff material ??
Reactions: 1 user

Bottom line, it's be easier,cheaper, SAFER to stock up on branches then rent a chipper for 4hrs, maybe a day. Maybe make a deal with local arbourist to chip and dropoff material ??
Click to expand...

I can't argue with the safety aspect but for the cheaper and easier: My goal is not to chip wood. My goal is to build something.
Reactions: 1 user
T

awesome said:
I can't argue with the safety aspect but for the cheaper and easier: My goal is not to chip wood. My goal is to build something.
Click to expand...

I think we are kindred spirits. I am retired and because I too like to build things I have spent a big chunk of the kids inheritance equipping myself. If they want it back they will have to find a buyer for the machine tools.

Keep those creative juices flowing and your fingers away from things that bite!!!

awesome said:
I thought the children bike in the back of one of the pictures would make it clear that I am far from being retired

Only advice I could give having owned one chipper and operated a smattering I didn’t own is to take a look at a functional wood chipper before going on a wheel reinventing excursion. Only ones I’ve seen work pretty much like a salad shooter with the slicer blade attached but on a MUCH bigger scale. Big flywheel with a few blades firmly attached to chip the wood and act as a fan to blow chips out a chute of some sort. The inertia of the flywheel works as a sort of shock absorber to keep the shock loads off the tractor PTO. I would agree actual chipper knives would be highly desirable.

In principle, it’s a pretty simple concept. In practice building one that works without damaging nearby persons and property, good luck. Controlling the forces involved, even with a small tractor, can get a bit hairy.
Last edited: Nov 9, 2021

If you want a project chipper buy a chinese chipper clone. You will have countless hours of fun repairing, modifying and rebuilding. My 8" Jinma clone always has surprises for me every time I hook it up.

Get one with a big heavy flywheel, as you discovered you need the mass and inertia trying to chip wood of any size.

Top up the life and disability insurance while you are at it.
Reactions: 1 user
G

gge, if you want a 'project'.... grab two MTD walkbehind snowblowers, buy a PA 14HP engine and bidge into a SSQA dual snowblower for your tractor....
C

GreensvilleJay said:
gge, if you want a 'project'.... grab two MTD walkbehind snowblowers, buy a PA 14HP engine and bidge into a SSQA dual snowblower for your tractor....
Click to expand...

That sounds interesting! I have a couple walk behinds but no tractor mount.

I guess it's a better idea that my next project where I wanna bolt 4 chainsaws on a disc that would be rotated by the PTO.

(I need to clarify that I'm just kidding here )

That would be a hell of a brush cutter, awsome
Lol
O

awesome said:
I thought the children bike in the back of one of the pictures would make it clear that I am far from being retired

I can't argue with the safety aspect but for the cheaper and easier: My goal is not to chip wood. My goal is to build something.
Click to expand...