LE add-ons that are standard on Deluxe

I have one on order and I think the sway bars are not the telescopic type. Is this correct? I have the mirrors and light brackets included as well as corresponding switches and CC switch. I plan to install LED lights which i already have, provided they fit the brackets. If the sway bars are the fixed type, is there a kit number for the Telescopic ones?

See if this helps.

Nice chrome mark decals... lol I had too.

sway bar links (l8430-old l series number) I don't know for sure, but it seems like mixed experiences on if the com standard or not.
cruise
somehow you loose the stationary pto(you will anyway if you add air ride)
ext. mirrors
right step, grab handle
front lights

I have a list of the in cab items that are not included, but have not been able to confirm if the telescopic arms can be added, which is what I am asking here. That L8430 kit isn't for the Grand L series though, already looked into it.

There is a switch that can be added under the seat for the PTO, did not add that yet, not sure if I have a need for the PTO to run when not in the cab since it is used for mowers and hay baler, nothing I want to be around while spinning. Other than that, every slot will be filled on mine, whenever I finally get it. Going to add the QA hydraulics, and 3rd function kit myself, but not the mid PTO or underbelly front attachment for snow thrower and other attachments, so not going to be a full blown every option tractor. Not adding the spill guard system either, didn't care much for it's operation.

Whats funny is that Kubota used the same overhead shot of the station in both the Grand L60 catalog as in the LE catalog. The LE picture is showing the cruise control switch installed.
Reactions: 1 user

I have L3560LE ROPS - The sway bars are not telescopic, turnbuckle. I've been thinking about getting them. In the Messick's video linked above, at around 9:50 mark he discusses that. If you go to the comments and scroll down, Neil mentions the part for the telescopic sway bars.

DavyM said:
I have L3560LE ROPS - The sway bars are not telescopic, turnbuckle. I've been thinking about getting them. In the Messick's video linked above, at around 9:50 mark he discusses that. If you go to the comments and scroll down, Neil mentions the part for the telescopic sway bars.

I would hate to use the turnbuckle style and would definitely upgrade. (Fair dislosure: I've never used a quick hitch, which might serve a similar purpose).
Last edited: Jan 26, 2022
Reactions: 1 user
A

Thats what I was looking for. I was having a hard time for some reason finding the links in the parts for the sway and stabs. I use a QH on my B2410 but have to remove it to put the rough cut mower on, and the telescopic bars would be very handy for that, and the turnbuckles ARE a PITA so would replace those as well. Still looking for the telescopic bars though. I notice they are not in that diagram.
A

Guess kubota doesn't want to make a whole good kit for the LE. Would save half the cost since you have to buy two setups.
A

Wait until you see the cab prices. Yes you can add a cab to the HST, but you better have deep pockets! Even still, the cost difference between the LE and deluxe more than makes up having to buy the stab and link, still coming out ahead.

Color me confused, which is not unusual. You asked about the sway bars. My lift arms are telescopic. Which, btw, they were not on my L3901 and I love them now.
A

Well the whole thing is what I am looking to upgrade. If I ever get the darned thing. Was hoping the loader would be in by now.

Here's a good place to ask my dumb question. I have looked but y'all can give me the answer easier. To the left of "H" there's 2 covers and the round black cover. Light switches and 12v power port with cab version? The power port would be nice to use for charging or a handheld light. Is it pre-wired or added easily? 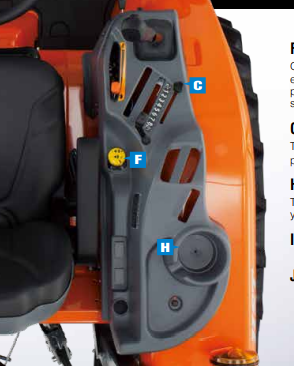 Those two blanks above the 12v socket are for the switches if you get the quick attach remote hydraulics. On the cab models, the light switches are in the right side B pillar. Non cab models don't have auxiliary light switches, just the main switch on the dash.
A

I can tell you the least used slot out of all the empty ones is the one to the left of the hitch lever. It's for the draft control. The other three open slots are for the rear remotes. 3rd function is a switch attached to the joystick. The only thing not available on either the cab or OOS are USB jacks like you can get on the Green tractors. That's something I will come up with on my own.
Show hidden low quality content
You must log in or register to reply here.
Share:
Facebook Twitter Reddit Pinterest Tumblr WhatsApp Email Link