Hi All, When the hst pedal is released and the rpms are up (the higher the rpms set the worse it gets) the tractor will lurch forward a foot or so then stop lurch again ans so on. usually if I clean pedal and linkage and re-lube it stops acting up. But lately it has gotten worse and clean & lube does not fix it anymore. It will actually continue going Lurchingly forward at 3000 rpm now and I have to go toward reverse to stop it, but it feels like its fighting itself. According to the WSM it looks like the pedal control is all electronic on this unit. Anyone have a pedal sensor go bad on them? Any suggestions? (no codes on panel) Is there a way to test the sensor?
Thanks for any help!

I also take it your not using auto throttle.
2

la724 said:
Anyone have a pedal sensor go bad on them? Any suggestions? (no codes on panel) Is there a way to test the sensor?
Thanks for any help!
Click to expand...

Have they gone bad: Yes, there have been reports within forums of members having to replace.

Any suggestions: Sorry, but no.

Way to test the sensor: Reference the WSM you have. I believe there is a section detailing how to test.
L

Thanks for the replies! The serial # is 30515, It is a 2007 l3540 hst not -3.
I should have said full throttle which I assumed was around 3000 rpm, I will have to check to see what the actual full throttle rpm is now that you have me curious. I also could not find any test for the pedal sensor in the WSM, I was hoping someone else had this problem in the past and could lead me in the right direction, as I'm only guessing it has something to due with the pedal sensor because in the past a cleaning and lube would fix it for quite some time.
Thanks Again.

Your model was one of the very early one's , they do have a newer version of the switch, probably to fix an issue, maybe like your issue.
I think for $100, I would be trying a new switch.

In the event it is useful for future readers of this thread.

The part # referenced by Mr. NI Wolfman is used in all Grand L40xx L40xx-3, L60xx, and others. In total there are 122 models that use this part according to info found on Messick's website.

To the OP...
I did find a section in the -3 WSM about testing the sensor. It is in the later part of the Electrical section or can be found using the trouble shooting chart for Error 81. Of course our manual might be different, but I thought this might give you a small clue where the info might be found on testing the sensor.

Thanks guys!
This place is awesome! I searched pedal sensor (which I probably should have done first-oops) and found this thread
https://www.orangetractortalks.com/forums/showthread.php?t=42819&highlight=pedal+sensor
which led me to this thread
https://www.orangetractortalks.com/forums/showthread.php?t=14049&highlight=swash+plate+sensor
this is exactly what I have going on and with this info I am sure I am on the right track!
But add to that if I didn't find these threads 200 hit the nail on the head and steered me in the right direction also. I did find the test in the back of the electrical section Thanks!

I don't think the sensors are 100% the same, or they wouldn't have different part numbers, that is almost always the case with kubota.
It probably has different voltage levels or tolerances.

And don't use the old part number use the newer part number, another quirk to kubota, newer parts are almost always backward compatible, so the newer number will be an improvement to an older design.

Thanks Wolfman,
That sensor TD170-52302 is listed as hst sensor, Is that the same as a swashplate sensor?Or is there another sensor somewhere? I'm not real familiar with the system but I'm learning!
Thanks

There are 2 sensors that control the HST

They look the same, but are located in different locations.
L

Thanks Wolfman
I am going to check the connections this weekend. I am due for a major service in 75Hrs I am changing the oil & all filters, hydraulic fluid (fresh sudt2) loader cylinder seals and now these sensors! I will check back with results once complete.
Thanks again for all your help!
L

Well I checked the connectors and they looked fine. I sprayed electrical contact cleaner and added dielectric grease to the swash plate and pedal sensors.
Let me back up a bit first,
Last week I washed the tractor and after that the problem was real bad. I didn't realize at the time the swash plate sensor is just about directly below the pedal sensor, so water definitely soaked both sensors, which probably aggravated the problem.
After cleaning the connectors this week I worked the tractor on Saturday and the lurching was still there but very minor.
On Sunday, for some reason the lurching got so bad I ran right into a tree with the loader so I parked it.
New sensors ordered, I will let you know how I make out with the new sensors after I install them!
Thanks
L

I finally Replaced both the pedal sensor and the hst sensor and re calibrated them with the dash. The procedure is in the electrical section of the manual.
It was strait forward and simple.
The result, OMG what a difference. It's like a different tractor. Not only the lurching when stopped is gone, I can creep up to things now without smashing into it, but also when cruising it is now steady and smooth.
I never noticed the the issue when cruising before as it would lunge at times I figured it was my foot moving when going over bumps, but it is so smooth now its unbelievable the difference. I guess I got used to the way it was before.
Thanks for everyone's help, I really appreciate it!
R

I'm having some HST problems with my 2015 L45 that sounds similar to what you recently experienced. The tractor lurches when moving in reverse -- like no movement for a few seconds, then a lurch backwards, then no movement for a couple seconds again. Repeats over and over. I've been tolerating it for a couple weeks now, but suddenly I no longer have any forward movement. Reverse still behaves with the lurch but pressing the pedal in the forward direction has no result, other than revving the engine when Auto Throttle Advance is enabled (but that is mechanically connected between the pedal and the engine throttle). What is most odd is the tractor was working fine with forward movement two weeks prior. I parked it and didn't touch it until Saturday and after starting it the forward did not work at all. Seems strange that the problem would occur while the tractor was parked.

Using the IntelliPanel test mode shows the voltages change in both pedal directions so I assumed the pedal sensor is good based on that. So I've been thinking I'm going to have to tear the HST apart to find the problem, but this thread has given me hope. You also had good readings on the pedal voltage test yet the pedal sensor was still bad.

I have the WSM for this tractor and measured the resistance between the 4 pins on the pedal sensor and 2 of the three measurements check out but the third measurement does not. The WSM claims it should be between 0 and 1 KOhms but I'm seeing it stay between 0.9 and 1.5 KOhms. So I'm hopeful that this is the problem. I have not yet had a chance to test the Fwd and Rev swash plate sensor resistances, as they are tucked in tight under the floor.

I'm curious if you happened to isolate which of the sensors was bad, since you stated you replaced both. Did you ever try one sensor replacement at a time? Also, did you ever test the sensor resistance with an ohm-meter?
2

During research for a problem a friend is having with his tractor, I read this post and want to add clarity about the two sensors: HST Pedal and Swashplate Position sensor.

Mr. Wolfman posted the correct part numbers (at least during the time of this post) and they DO use the same bench test and look identical.

The workshop manual makes it clear these are indeed different. See below: 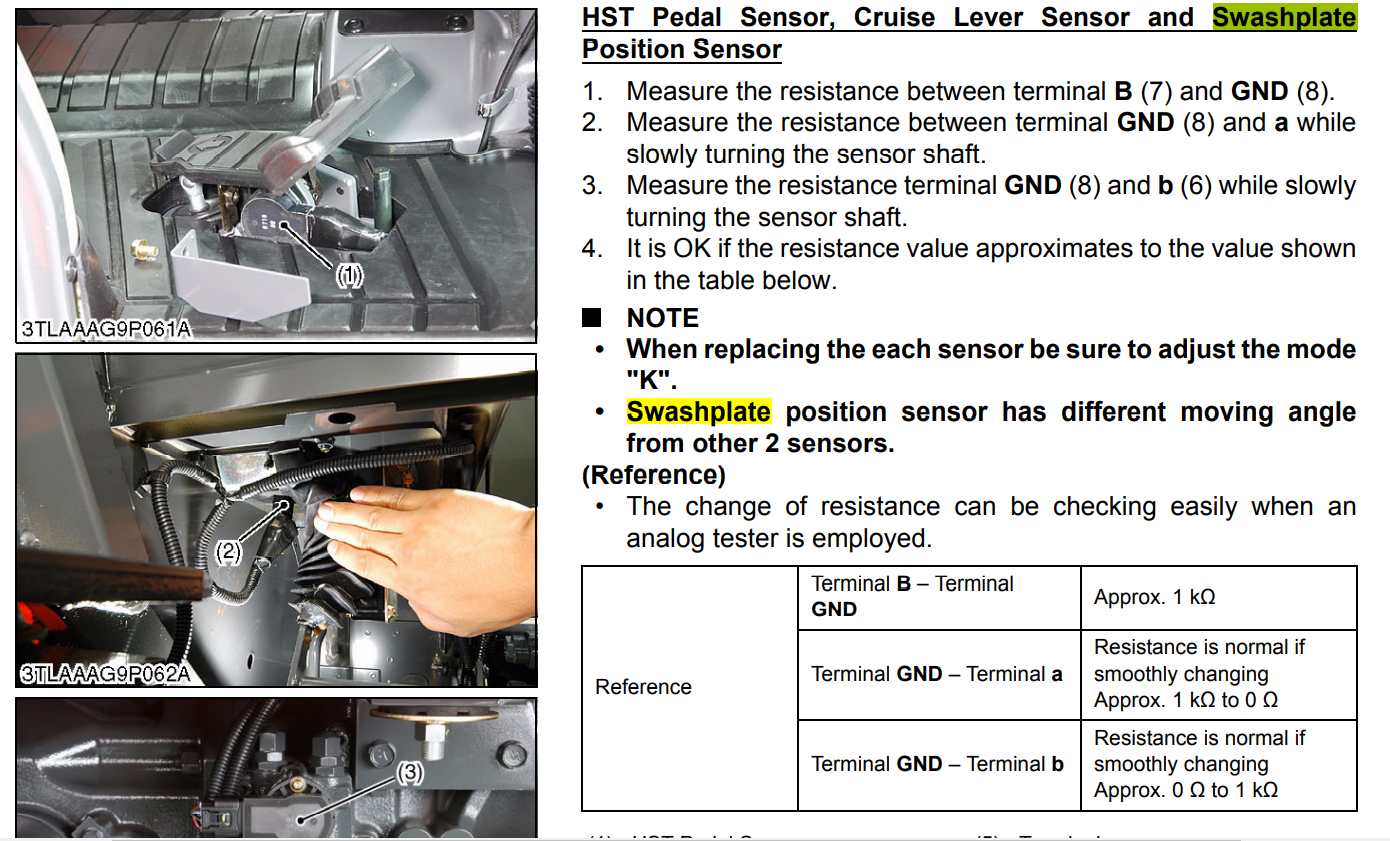 I'm bench testing a Swashplate position sensor now. Not certain if it is good or bad, but this is what I've noticed about this particular unit. Travel is 180 degrees total and at either end for about 45 degrees or so there is no significant change in resistance. Near the midpoint of travel there is more resolution of the output.
Show hidden low quality content
You must log in or register to reply here.
Share:
Facebook Twitter Reddit Pinterest Tumblr WhatsApp Email Link