I've got an L35 that the previous owner hacked a bunch of wiring up on and I would like to return it back to factory (or close to it). Right now, I need to turn the key switch to the accessory position as normal, but then use an extra start button they have wired in to start the tractor. They also had a generic starter solenoid bolted the frame, but only two terminals are wired, so I'm not sure how it would actually work. Using the key to shut the engine off also doesn't work, I have to use the manual shut off.

I've been going through the wiring diagram and trying to compare it to what I have on the tractor, but some times a picture is worth 1000 words. I'm wondering if someone with an L35 might be able to snap a picture or two down by the starter? Just hoping to get some clues as to how I should put it back to factory.

This is what I'm currently working with : 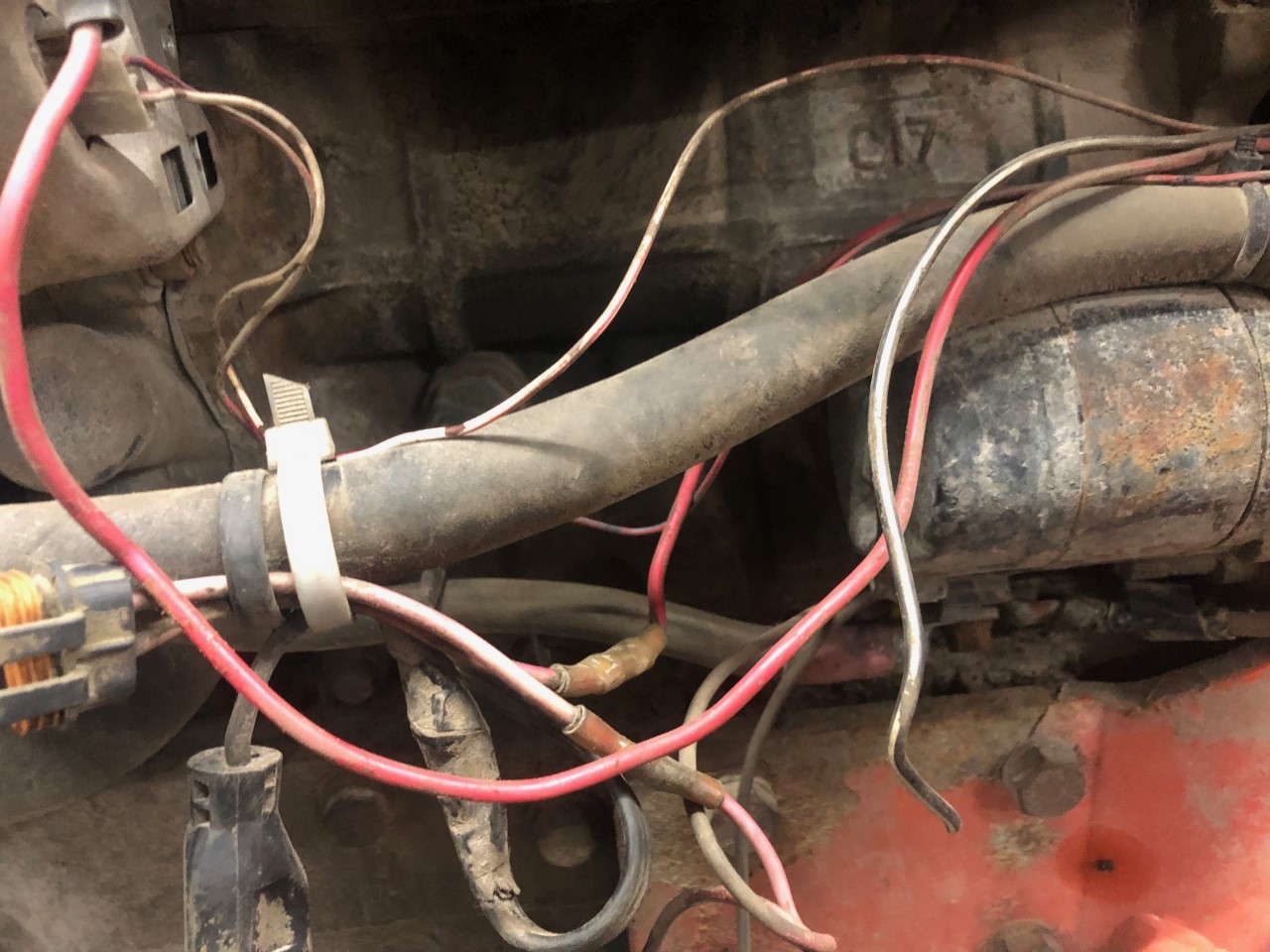 I have the wiring diagram, there's just a few things that aren't adding up comparing the diagram to what's actually on the tractor (or what's left of it).

There may be a few different issues I'll have to solve as I'm assuming they did this because a component failed and they couldn't diagnose/field fixed and never got around to making it right.

Thanks for the offer though.
C

I have the wiring diagram, there's just a few things that aren't adding up comparing the diagram to what's actually on the tractor (or what's left of it).

There may be a few different issues I'll have to solve as I'm assuming they did this because a component failed and they couldn't diagnose/field fixed and never got around to making it right.

I have a similar tractor and had the same issue, the key wouldn't activate the starter and wouldn't shut off the engine. Found out that it was a micro switch in the steering wheel dash that was faulty and another switch that activates the glow plugs. Check your relays and such is what I'd suggest.
Reactions: 1 user
N

There are wires from the dashboard main harness that do not go thru connectors (except Glow Plugs) and go directly to serve the starting circuit and other - here they are:
1) Oil pressure (White/Green) - not a part of the starting circuit.
2) Glow Plugs Large (Black/White stripe) - This does have a single connector but not a part of the starting circuit.
3) Alternator 2-conductor: Red/Blue and White/Red
4) Fuel Indicator: Yellow/Green
4A) You need a new thick wire from the bolt/nut on the starter (the one
with the large positive wire from the battery).
The other end of the new wire goes to one side of the slow blow 40
amp fuse.
5) You will see a large red wire. It has 2 branches (Both RED wires) inside the harness:
5a) One side goes to the alternator bolt and nut connection on
the back of the alternator It should have a ring terminal.
5b) The other side of the branch goes to the key switch thru the
other side of the 40amp slow blow fuse.
6) You should see a Black/White wire (Don't confuse with glow plug - it is thicker) this goes to the tab connector on the starter solenoid.

So that's the way it's designed. I wonder if the OEM relay under the dashboard is bad or missing. If so, it is nothing fancy and any 4-wire relay for starting will work provided the tab orientation is the same. 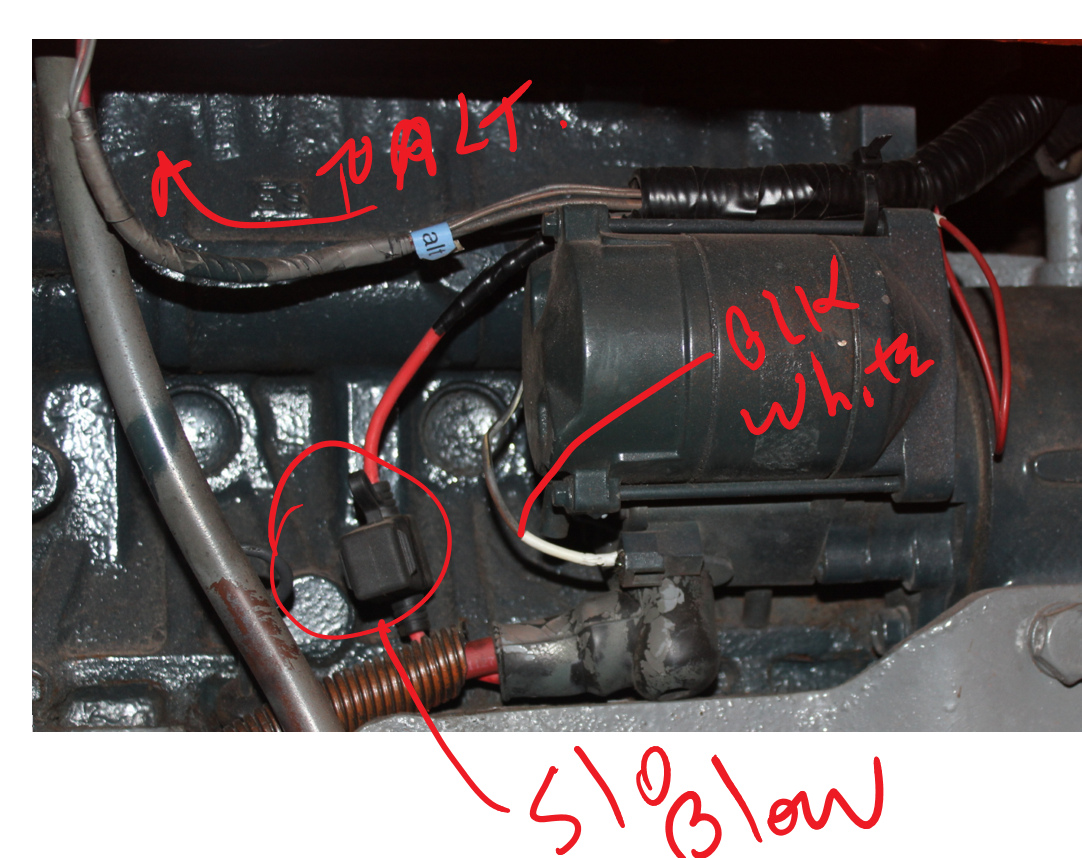 You ain't got enough bandaids or soap when that slices your hand real good !!!!!

bandaids to TRY to stop the blood oozing out, soap to rind you to NOT use so many 4 letter words....

Thanks so much Calibdovah and Nicksacco, I'll dig into it more tonight with this information in mind.

I have been using it as is for the last year or so, but recently the key switch has been intermittently not working and I wouldn't get any glow plugs or dash lights. I would have to jump the black/white wire to the big red wire to engage the starter, but it's annoying and risky as I don't have any safeties in place. I'm assuming there is a bad connection in the rats nest that is causing this.

When I was checking stuff with a meter last night, I was getting 12V at the red wire on the ignition switch and then 0V on the same wire when I turned the key to the ACC position. This seems very strange to me as it should always have 12V, I'll have to dig in a little deeper. I'm hoping to find a dead relay or safety switch which is likely the reason all of this was done in the first place.

When I restored my L35, I trashed the whole wiring harnesses as they were total junk from age and abuse!

Attached is a simple continuity test you can do on your key switch to ensure it's working.
Just set the multimeter (or test light) across the poles and see the result.

I was actually missing the Timer relay and someone had stuck in a regular starter relay in it's place - ouch.
It's about $70 if you need one.

Also, many times the contact housings are broken in the old connectors and you think they're plugged in, but one or both can move as you push the sides together breaking electrical contact, I trashed those OEM connectors as they were too far gone and substituted Deutsch.

There are 3 micro switches located on glide shift, PTO, and brake lock. To start the tractor, the PTO and glide shift switches must be engaged - which means that the switch will be ON when the PTO is DISENGAGED and glide shift is in NEUTRAL. Doesn't matter about the brake. All 3 switches are same model. They have a springy metal leaf that can get distorted and won't mash the actual switch button.

Could be the PTO switch (buried under the console and usually forgotten) is junk but you can unplug the wires and do a continuity test on it.

Let us know how your doing on this. I hope this helps you. 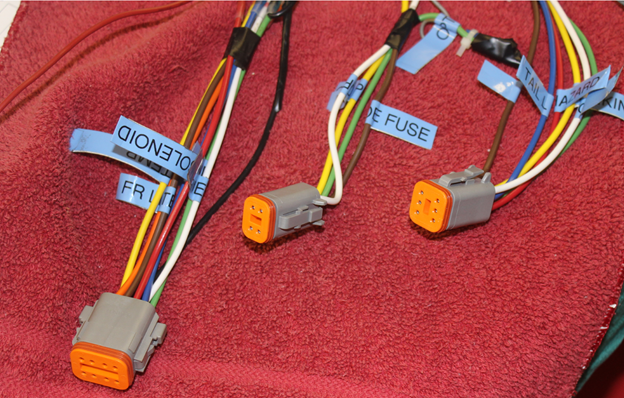 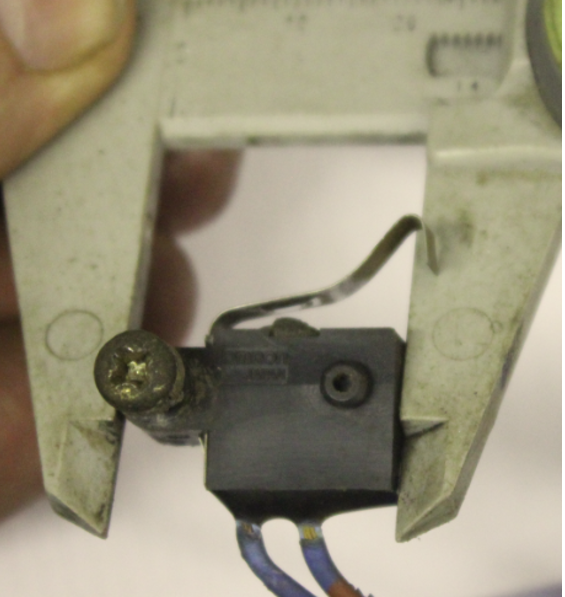 I'm hoping I can still salvage this harness, but I was definitely planning on replacing some connectors. Good tip on the Deutsch style, I think I may even have some around.

I was trying to test my timer relay last night and believe that its dead, I couldn't hear any clicking when I put power to the ACC and ground pins. My understanding from the manual is that once ACC power is removed, you should hear it click for when the relay shuttles over until the capacitor discharges. I did check the actual shut-off solenoid and it worked when given 12V. I think the shut off issue will be a pretty easy fix.

I believe the starter relay was bypassed and think that that is most likely the cause of the jerry rigging. None of the safety switches are required to start the tractor, I would like to get them hooked up again as they're there for a reason and I've had a scare or two starting the tractor in gear.

Looks like my ignition switch was either replaced or maybe just the wiring chopped up as there is no 4 pin connector there anymore, just 4 individual wires with spade connectors and electrical tape. I'll be sure to use you diagram to confirm its good before fixing the connectors up.

I'm always amazed at how "repairs" are made to equipment. I also restore motorcycles and it's a crap shoot what you see there too!

You're correct on the cut off solenoid - At "key off" the solenoid is energized and pulls the injector pump rack closed. Approx 10 seconds from "key off" until it releases the solenoid.

If you need to replace the safety switches, they are Omron - see attachment.
You want the LONG LEAF lever for all 3.
SPST-NO (normally open).

It seems everyone is very proud of these switches and the price reflects it.

If you need to remove the console to get at the PTO switch, let me know as I have some tips for you.

Well, I think I have it all sorted out. A couple of different issues I found, but I'm still not really sure as to why it was hacked up in the first place. The key switch is working how it should now, as well as the safety switches. The combination switch for the lights/hazards wasn't working before but now I can get it to work intermittently, it seems pretty badly corroded so I think I'll just have to replace it.

It took a couple of evenings with the wiring diagram and a multi-meter but I'm sure happy to have it fixed up.

Thanks to all who helped me out.
-Luke
N 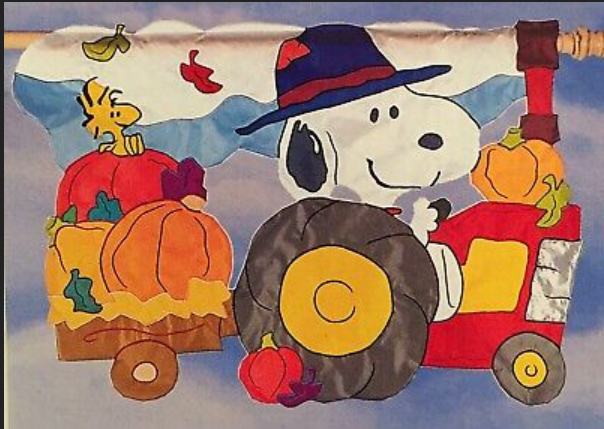 If it turns out you need a shutdown relay after your diagnosis, check this out…

Just as a FYI to save someone else some time and money. This part is a direct replacement for the above Kubota part number... at less than half the price. Pulling up the picture on the Messicks page is the Denso part # 061700-3770. This is the supersession in a full solid state version. More... 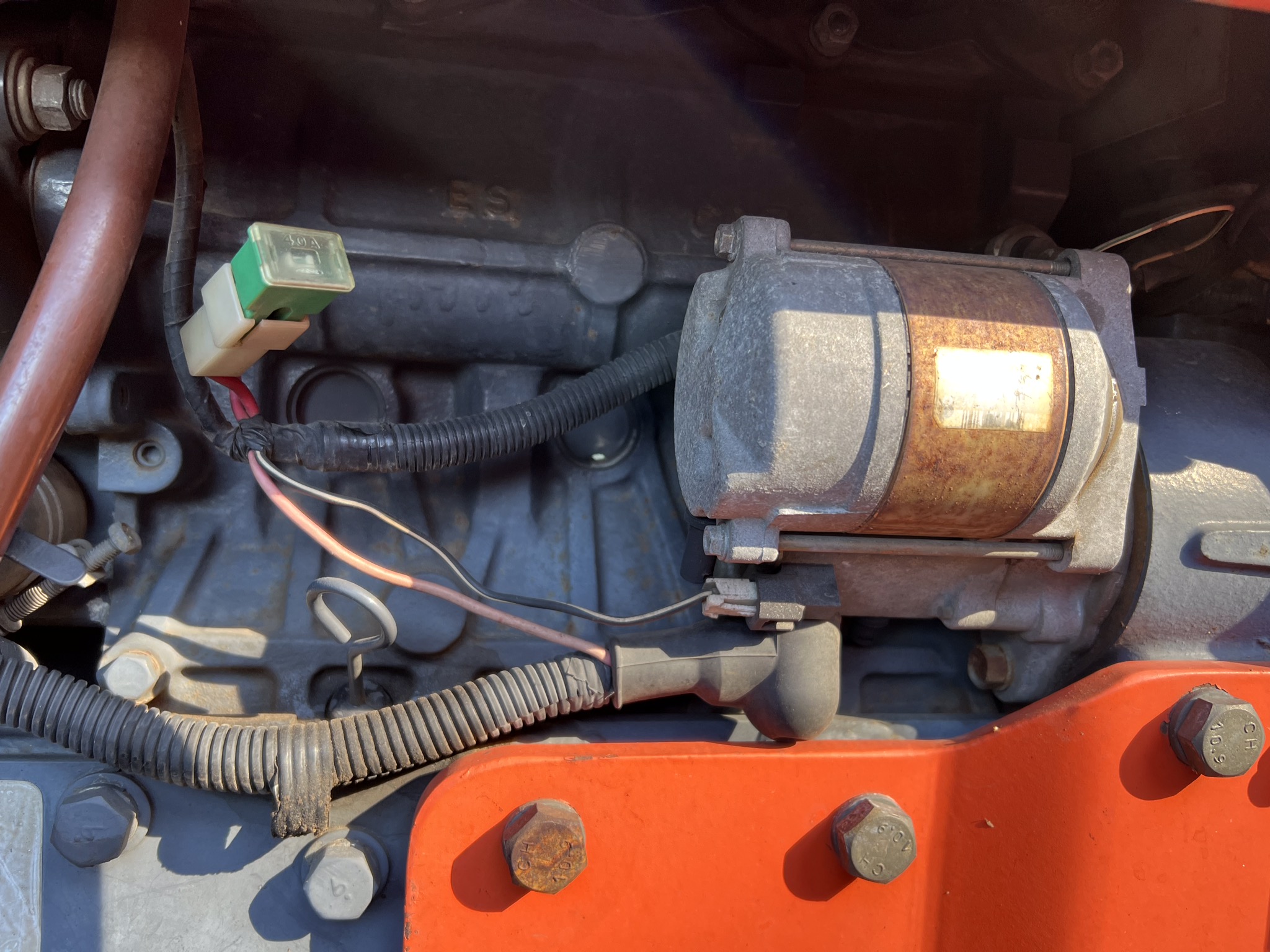