I have a Craftsman 17" 1.5 hp floor standing drill press I bought probably 15-20 years ago. It's been trouble free, but as I do a lot of different projects requiring drilling steel, aluminum, plastic and wood, changing the speeds by moving the belts around gets to be a pain in the derriere. So a while back I watched a YouTube video by Clough42 where he installed a new 3 phase motor and VFD on his Grizzly lathe, and it go me thinking. So I bought a TECO L510 single phase 115 VAC input VFD and a 1.0 hp 56 frame 3 phase motor to make the conversion. I made a new control panel and mounting box for the FWD/REV switch, ON/OFF switches, speed control potentiometer and a digital tach display. I bought a 10" X 10" X 6" case with a hinged cover to mount everything in. It's a tight fit and there's no room to really route the wires as neatly as I would like, but it works. I installed the tach pickup in the lower belt housing and glued the magnet to the spindle pulley. I had to make a mounting bracket for the box, so I used a piece if 1/8" plate out of my scrap bin and bent it 90° so I could bolt it to the motor mount and the back of the box. I got everything mounted in the case, twice. I had to switch the VFD to the opposite side as the door latch hit it and the cover wouldn't close. So after drilling more holes, I got everything mounted and wired up everything I could until I mounted it on the drill press.
I took it down that afternoon and got the case mounted, ran the four cables into the box, stripped outer insulation off all them and cut the individual wiresl to the correct length and connected them to the proper terminals. I double checked all the connections and everything was connected correctly, so I plugged the power cord in, tripped on the circuit breaker. No sparks, fire or bangs, so I checked for voltage st the contactor and it was good. Pushed the on button and the VFD powered up, the ON/OFF buttons lit up and the tach digital display came on and read zero. I turned the switch to forward and the drill started rotating a about 140 rpm and sped up when the knob was turned clockwise. Switching from forward to reverse, the spindle slowed down, stopped and then reversed as per the parameters I set up in the VFD.
A safety setting I also enabled was to disable the drive if turned on with the speed control is not at minimum. You must set the control to minimum speed and power cycle the drive before it will power up the motor.
The only problem I had was that the tach wouldn't work. Wasn't sure why. I mounted the pickup the specified distance from the magnet on the pulley, but I can see the cable end of the pickup and the LED is lit.
I isolated the tach problem to the sensor. Sooooo, I installed a connector on a new sensor, connected it, stuck a magnet on the drill chuck, turned it on and brought the spindle speed up while holding the sensor next to it, and the display read out the proper RPMs.
It seems that the magnet that comes with the tach kit has to have a certain side facing the sensor. When I held the new sensor next to the magnet on the pulley, it wouldn't work either. Hmmmm. So I tried the new magnet by sticking it on the chuck and running it and with one side facing the sensor it worked, and when flipped over it wouldn't. That is very strange. I pulled the pulley off, popped the magnet off and hot glued it on with the other side facing the sensor. Put it all back together and it works like it should.
The instructions with the kit don't mention that a certain side, or pole must be facing the sensor. 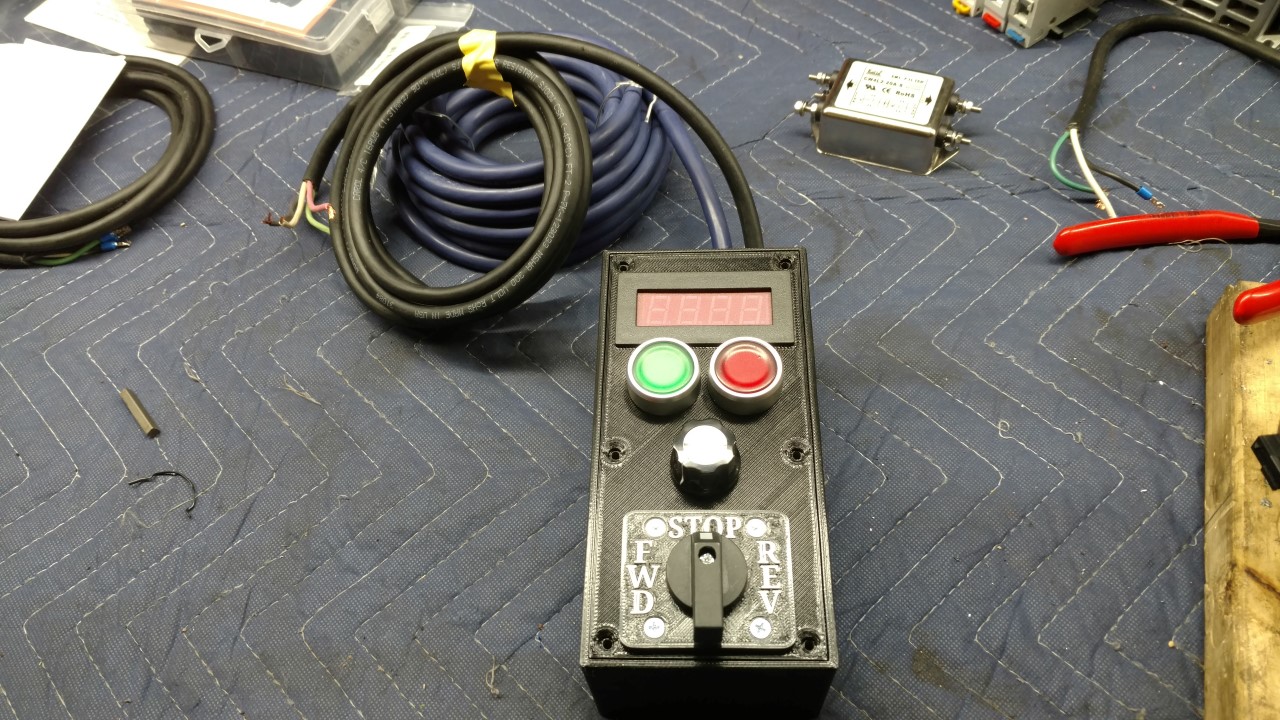 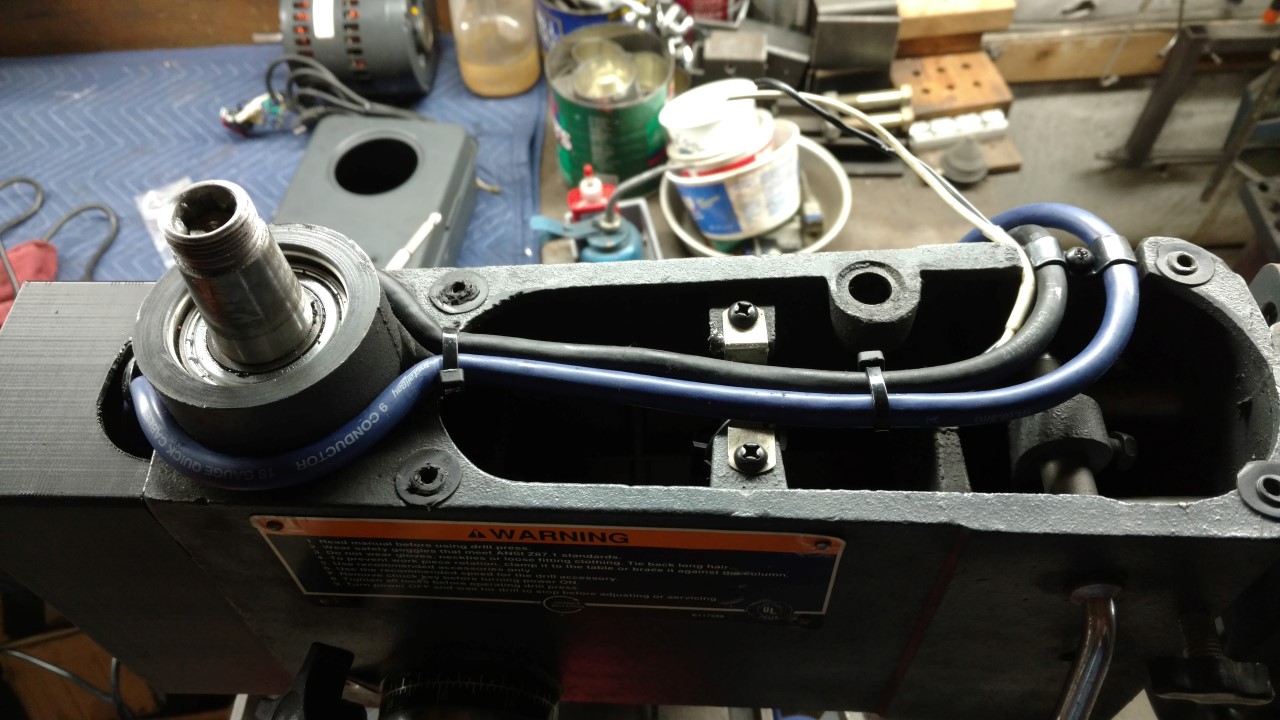 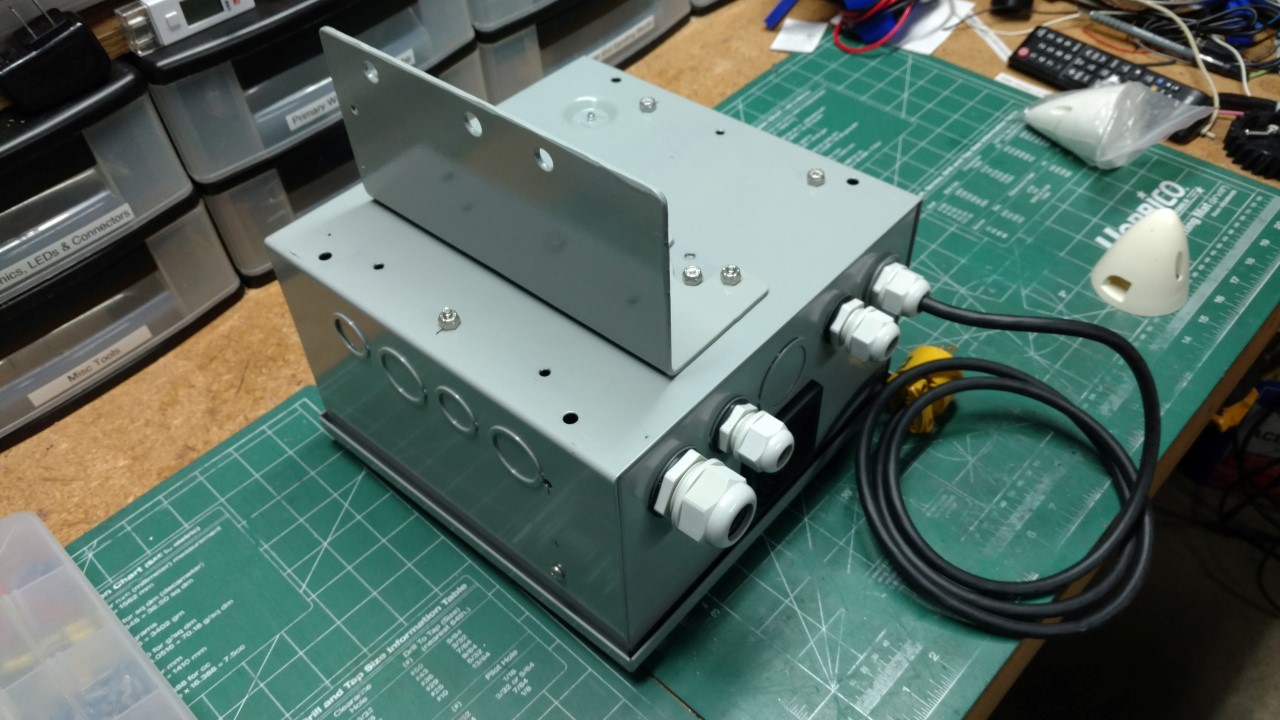 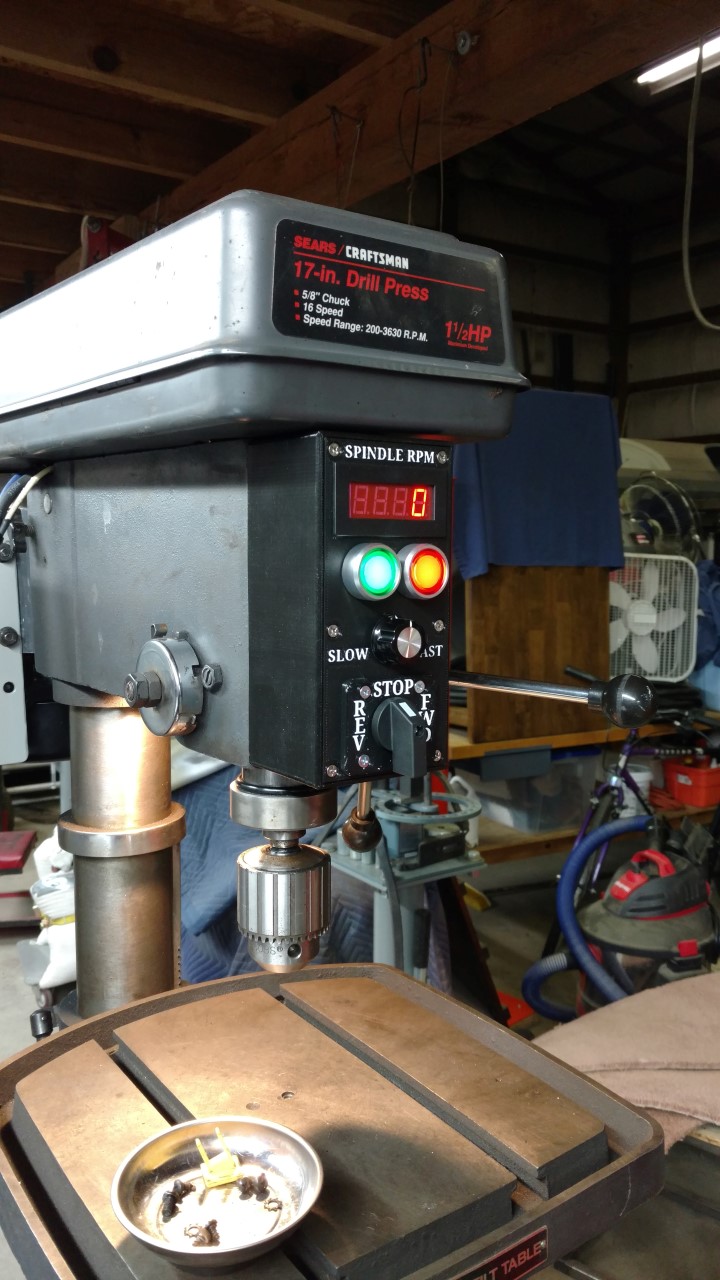 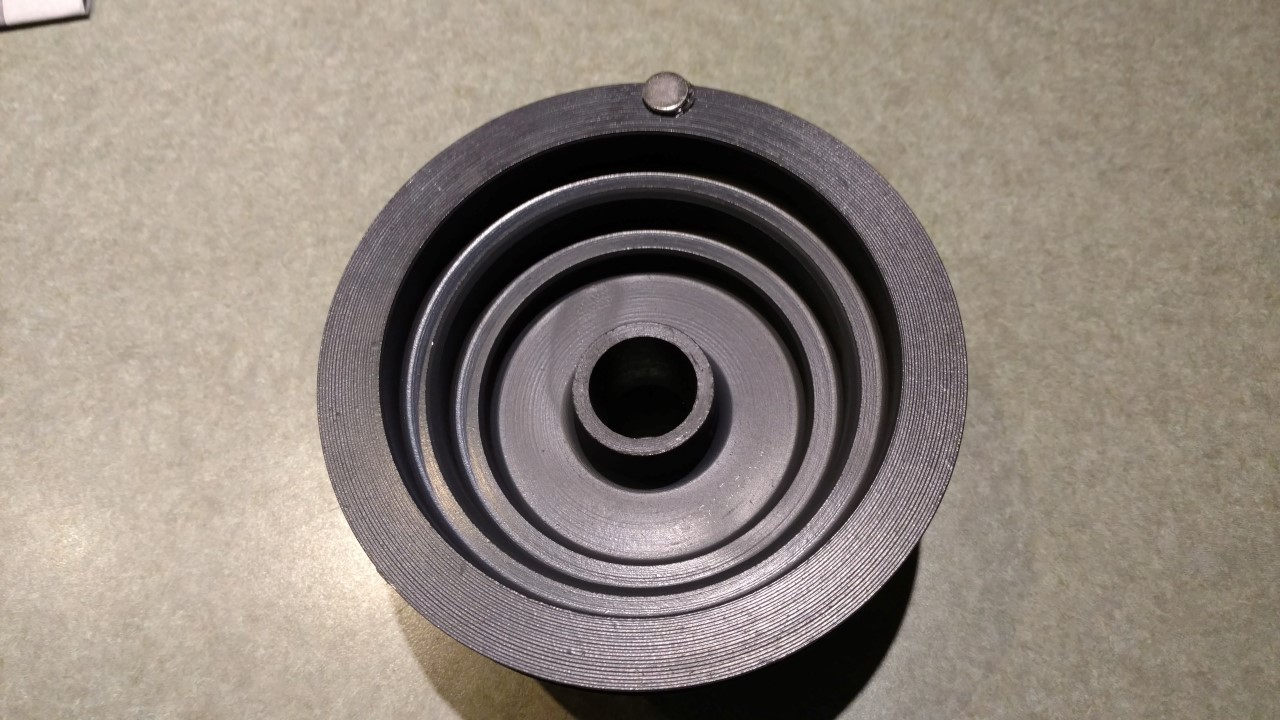 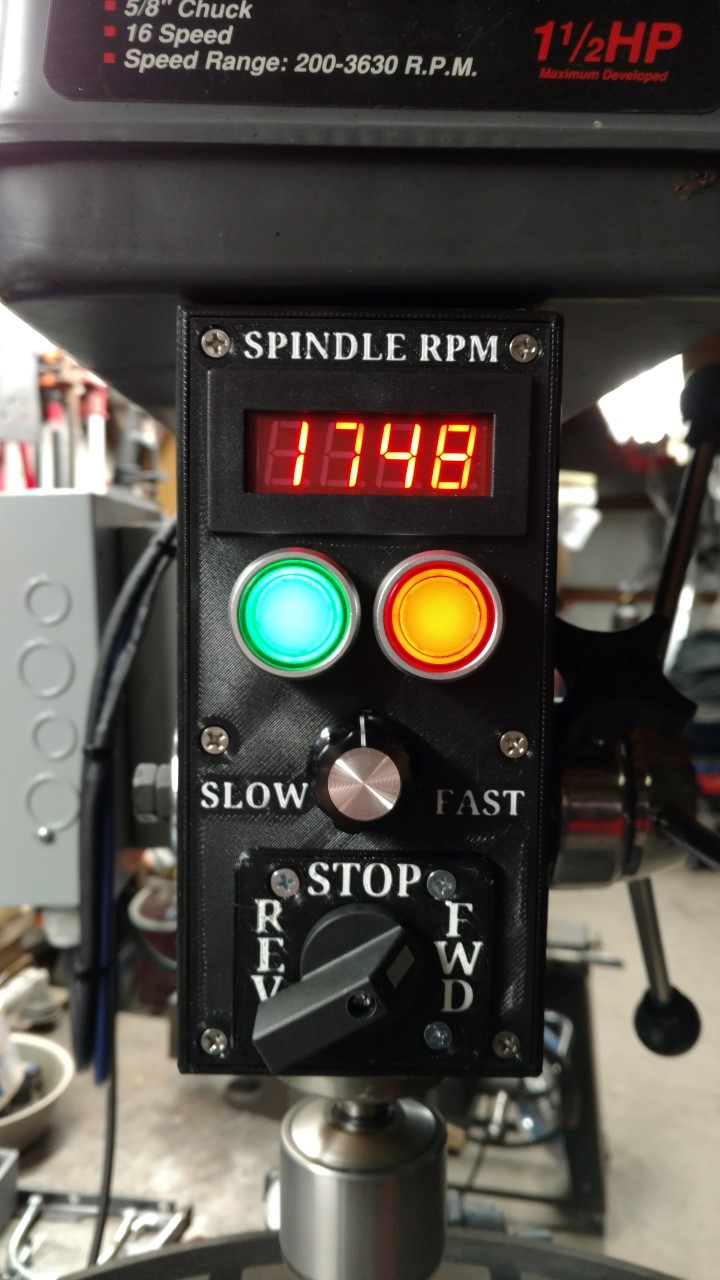 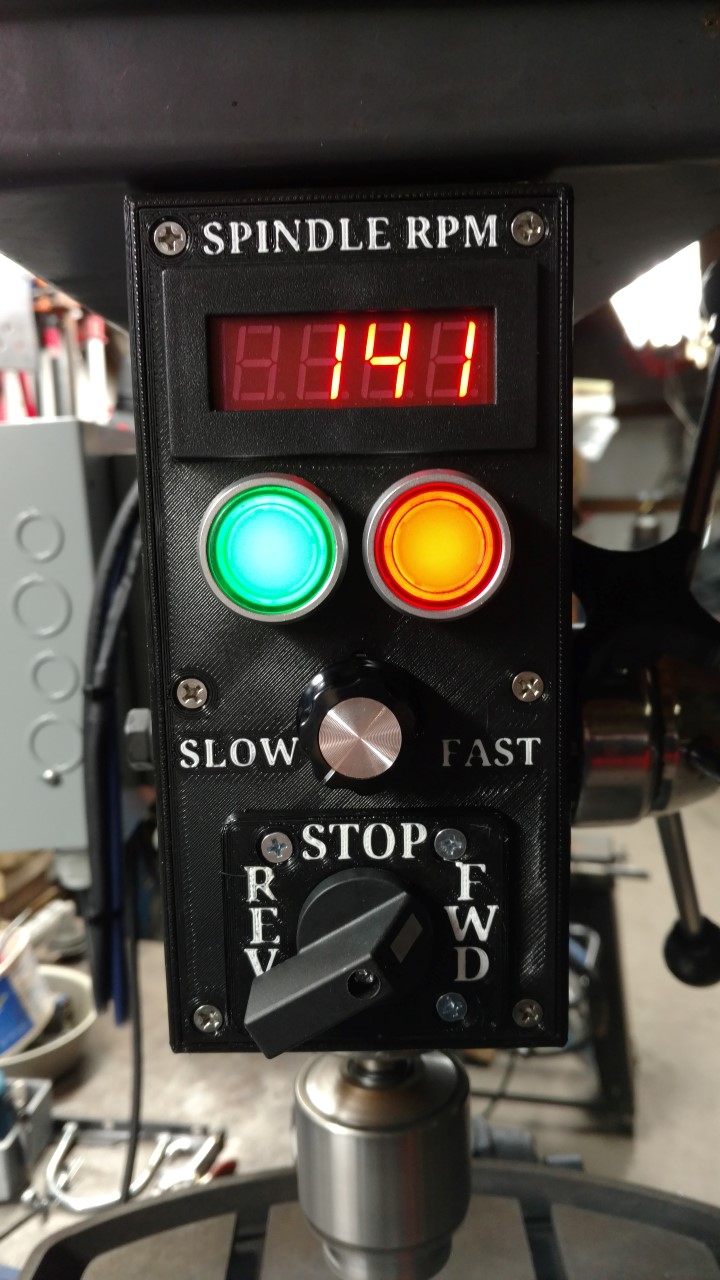 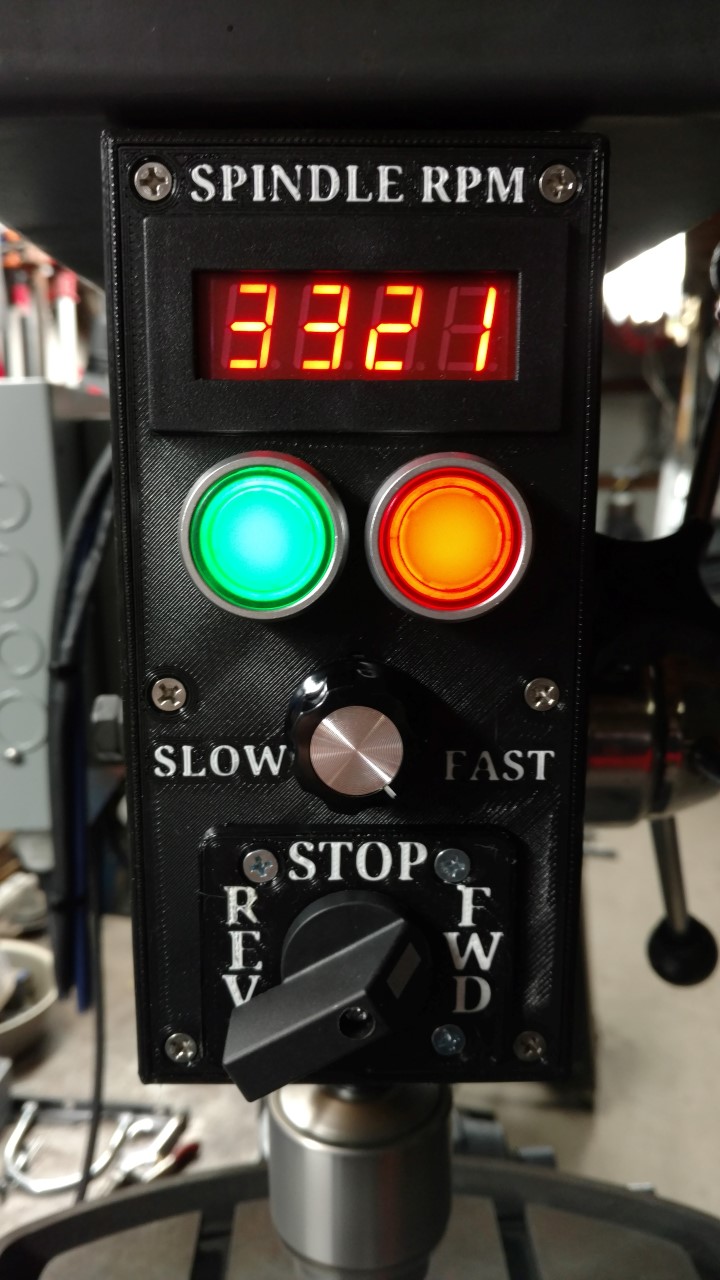 I think it will be a great upgrade, as the drill press is one of my most used tools in the shop. 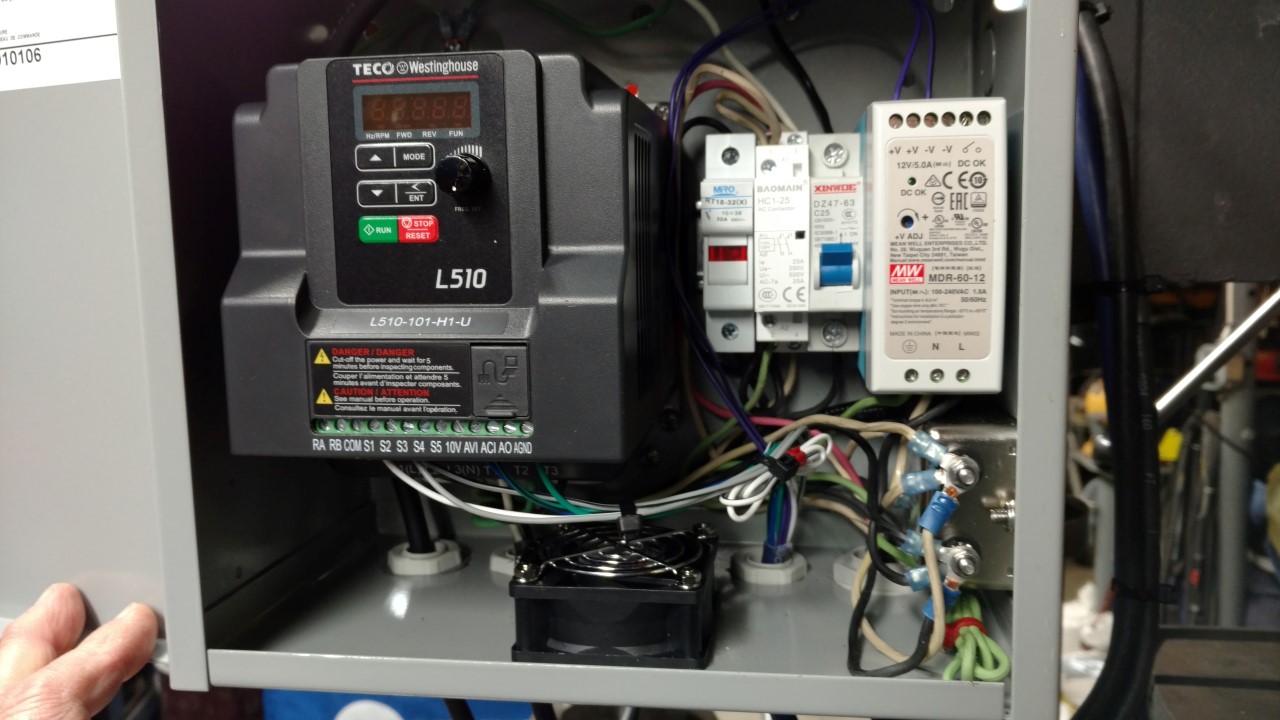 Very nice work! I did the same thing on one of my drill presses and I can assure you will not regret it. Makes drilling and tapping a breeze.

Thanks for the great comments, guys.

Yooper, I can slow it down even more with a change to the VFD parameters, which will work great for tapping, which was one of my intended uses.
Will make breaking taps easier!

Next on the VFD list will be my Jet BD920N lathe.
Finding a motor that will bolt up to it may be a bit more difficult, as it looks like a mount that isn't a standard mount, but I'm researching it.

I did something similar (but a lot less elegant) with my drill press about 10 years ago using a Teco FM50 VFD. One suggestion that you might find useful is to parallel wire a pair of foot switches with your forward and reverse switch. I found that those foot switches work much better when tapping holes with the drill press because it gives you an extra free hand.
R

DLSmith and mendonsy,
As an employee of the TECO Westinghouse Motor Company I appreciate the business you provided! Glad the product worked out well for both of you.
D

Russell King said:
DLSmith and mendonsy,
As an employee of the TECO Westinghouse Motor Company I appreciate the business you provided! Glad the product worked out well for both of you.
Click to expand...

After I saw the conversion Clough42 made to his lathe using a TECO unit, and watching the ease of setup and large number of parameters that can be defined, I was sold on a TECO unit. While my application is a very simple one, knowing the unit could be used on a more complex application is a big selling point.
I'm considering adding a couple of switches to the S3, S4 and S5 ports to activate predefined spindle speeds for drilling certain types of material, like wood and aluminum.
I played around with it a little yesterday, and set the minimum frequency down to 2.00Hz which gives me about 55 rpm, which should be good for tapping holes. It seems to have full torque even at that low speed too. Awsome setup!

Keep up the good work.

A very clean well thought out mod, I have to as though, what do you have tied up in it, VFD and 1hp 3phase motor, we cant figure in yoru time and odds and ends
D

skeets said:
A very clean well thought out mod, I have to as though, what do you have tied up in it, VFD and 1hp 3phase motor, we cant figure in yoru time and odds and ends
Click to expand...

This is a list of the major things I used for the conversion, The SJ Cord, terminals, zip ties, etc., I had on hand. The control housing I 3D printed three different times, until I got it just like I wanted it. At about $.50 each for the PLA material, it's cheap to do so.

I have used it a few times in the last few days, and I'm really happy with how well it works. It really makes it so easy to vary the speed for different drilling tasks like normal drilling with a 3/8" bit through 1/4" bar stock, step drilling a 16 ga. steel panel, and using a hole saw.

The only other change I may make is to drill and tap a couple of holes on the side of the casting to mount the equipment box directly, instead of hanging it off the motor mount.

Always wondered how you tap with a drillpress ? I was taught..1 full turn, back a 1/4 turn, repeat,add oil, repeat...... Do you have special taps for drillpresses ?

GreensvilleJay said:
Always wondered how you tap with a drillpress ? I was taught..1 full turn, back a 1/4 turn, repeat,add oil, repeat...... Do you have special taps for drillpresses ?
Click to expand...

I use the Greenlee Dtap sets which are a combination drill and tap in one device. I coat them with Stick-Kut which is a wax based lubricant. I do run the drill press very slowly and reverse it if the tap starts to bind up.
F

Thank you for sharing how you did it. I was recently told to do the same with drill press, but I have very little experience in this area and your post helped me a lot with this. I didn't understand why, but after a few days our drill press stopped working and I was very scared because I thought I had done something wrong. When my uncle came to see it, he said that the electronics had to be replaced. Luckily he works here automation-usa.com and he was able to quickly find and install the broken element. He said that it was not his fault at all and it was because of the poor-quality parts. So now everything is great!
Last edited: Apr 10, 2021
D