Can I determine what model year from serial code?

As near as I can tell, and I spent a fair amount of time looking, there are two ways to determine a Kubota tractors age, because you are not going get the date of manufacture from the serial number. You can look at the sellers of used tractors. A couple of web sites always have serial numbers and years listed. Look at all the tractors listed with your model number. That will get you close, as in "not older than, not newer than.

The most accurate way is to contact Kubota customer satisfaction through the Kubota North America web site. When I did that for my tractor, they answered with the date of manufacture. (I bought used and wanted to verify the advertised age). They also provided the name of the selling dealer when I requested it.

Be aware that tractors are normally aged by the dealer sales date. A 2017 tractor may have been manufactured in 2016.

I bought used and called my local dealer with the serial number. He gave me the selling dealer contact info and the date it first sold. The selling dealer gave me the original owner’s name and mailing address/contact info, service-history of that owner, and the date it sold to the second owner (whom I bought it from) and the last date of any service performed at any dealership.

Neither prev. Owner’s used it much (less thn 400 hrs) but the 2nd owner must have used it in heavy brush because of the sticks found in hidden places and crushed hyd filters and torn tie-end-covers, and then he must have stored it in a shed because the paint is unfaded but the wiring was severely mouse-eaten behind the inst-panel. That was not immediately apparent as I was unfamiliar with the tractor and didn’t really inspect very deeply as it had such good appearance, but the low-fuel warning which doubles as an alternator warning had the entire lamp-assy removed to hide the fact the alt was inoperative (hidden by the lack or warning and covered by the new battery and not checked by me... a rare event for me not to thoroughly check out a vehicle before purchase... but I dropped the ball on this one.). The temp gauge was also disconnected so no temperature was expected for the short engine run during the transaction...the “cold” indication never changed which was my first clue after I got it home to remove the instrument panel and trace-out the wiring which revealed the extensive mouse-damage to the harness. (Headlights dim and tail-lights completely removed didn’t wake me from my “new owner slumber” either.)

Good, no-damage metal bodywork tho’ and 80% tires, no rust and great paint.

Anyway... got all that fixed up and, Thankfully no real harm, as it’s a real nice low-time 1996 Kubota now!

Can not help but think “What if you can?”

Just seems like with tractors it is not when they were made, but rather how many service hours they have on them.

But then, who knows if a used tractor is showing accurate hours?

So it all comes down to evaluating tractor condition rather than worrying about when the tractor was made. I know when my tractors were sold, as I bought them both new. Also know the displayed hours are correct.

BUT if I were to sell them, how would the prospective buyer know that I was honest and not misleading him?

So I think the bottom line is not to worry about dates and displayed hours, and evaluate the tractor by its current condition. Easier said than done for most of us I believe; at least it would be for me to do accurately...

But this opinion is not an answer to what you asked. Sorry....

There ARE some clues that will indicate whether or not the tach indicated hours are accurate (or nearly accurate) as opposed to wildly inaccurate. If the tires are original and very worn that is an indication that very low hours are not accurate.

If the starter and alternator armature brushes are short...but the tach hours are low... that is a clue the tach is inaccurate. (When I bought my <400 hr tractor I replaced the alternator with new. I checked the Kubota specs on brush-length and examined the original alt brushes and they were virtually full-length of new. Along with no indication the mechanical tach-drive-cable had ever been tampered/disconnected....along with the selling-dealer’s report of service records which confirmed the tach time versus calendar-dates.... encouraged me to believe the tach is correct. 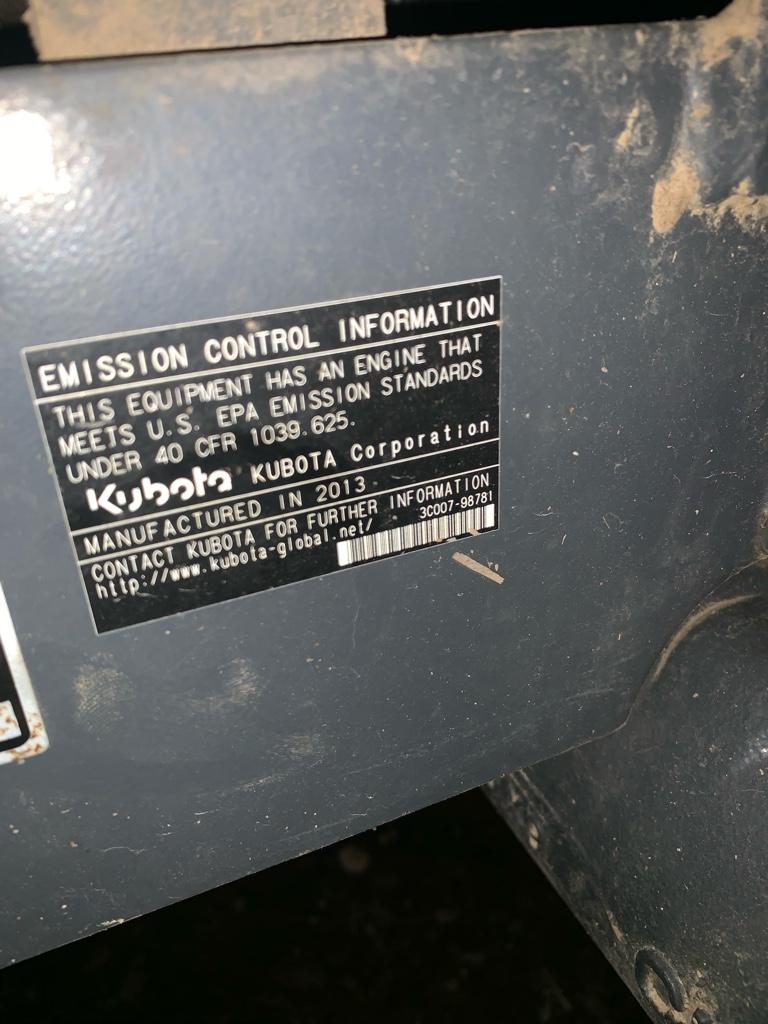 Not a 2301, but look for the emission tag on it. Mine is at the left front corner on the frame

only rtv's, that i know of
A

If I find that tag on a tractor I purchased I have seriously screwed up.

Year models of vehicles is a creation of the automobile industry. In most other equipment mfr’g the most important identification is the Serial Number or Build-Number.
Here’s a stoopid example: I own an airplane commonly known as a Cessna 170B. It’s official FAA registration certificate claims it to be a 1952 model. This is because it rolled off the assembly-line in Nov ‘52.
But it’s actually a 1953 year-model design with all the features introduced for 1953. As in the auto industry, next year’s “model” rolls off the assy-lines in the fall of the preceding year.
But when it was mfr’d in Nov ‘52 it was actually not registered in the U.S. It was shipped to El Salvador where it was first registered in any country’s aircraft registration system. After 20 years it was imported back into the U.S. by an Amoco Oil Co. employee and when he registered it with the FAA... it was issued a registration certificate which identified it as a 1973 Cessna 170B (because it was in 1973 that it first appears to have had registration requested of the FAA.). When I notified FAA that they had it WRONG... they “corrected” it to reflect it as a... 1952 model.
Clearly the FAA is dedicated to identifying an airplane’s model as in the year it first presents for registration.... having nothing to do with it’s design features or mfr’s identification by model year.
I think the bottom line for all us Kubota owners is that our tractor SERIAL NUMBER is more important than the actual date it rolled off an assy line, regardless of what some gov’t agency (EPA in this case) requires for it’s own paperwork issues.

avvidclif said:
If I find that tag on a tractor I purchased I have seriously screwed up.
Click to expand...

If you referring to the emission tag I posted I don’t know why you screwed up. My tractor has no emission equipment on it.