BX's house gets a new ceiling

My BX is housed in the remaining two bottom floors of a 16th-century guard tower (there are still some firing slits) that had been used as a stable for the last three centuries. The roof was redone 40 years ago, and I already had the dirt-and-cobblestone floor replaced with concrete in 2018, so now it was time to deal with what remained of the ceiling, which, after centuries, was ripe for replacement: worm-eaten or dry rotted, the main beam cracked. 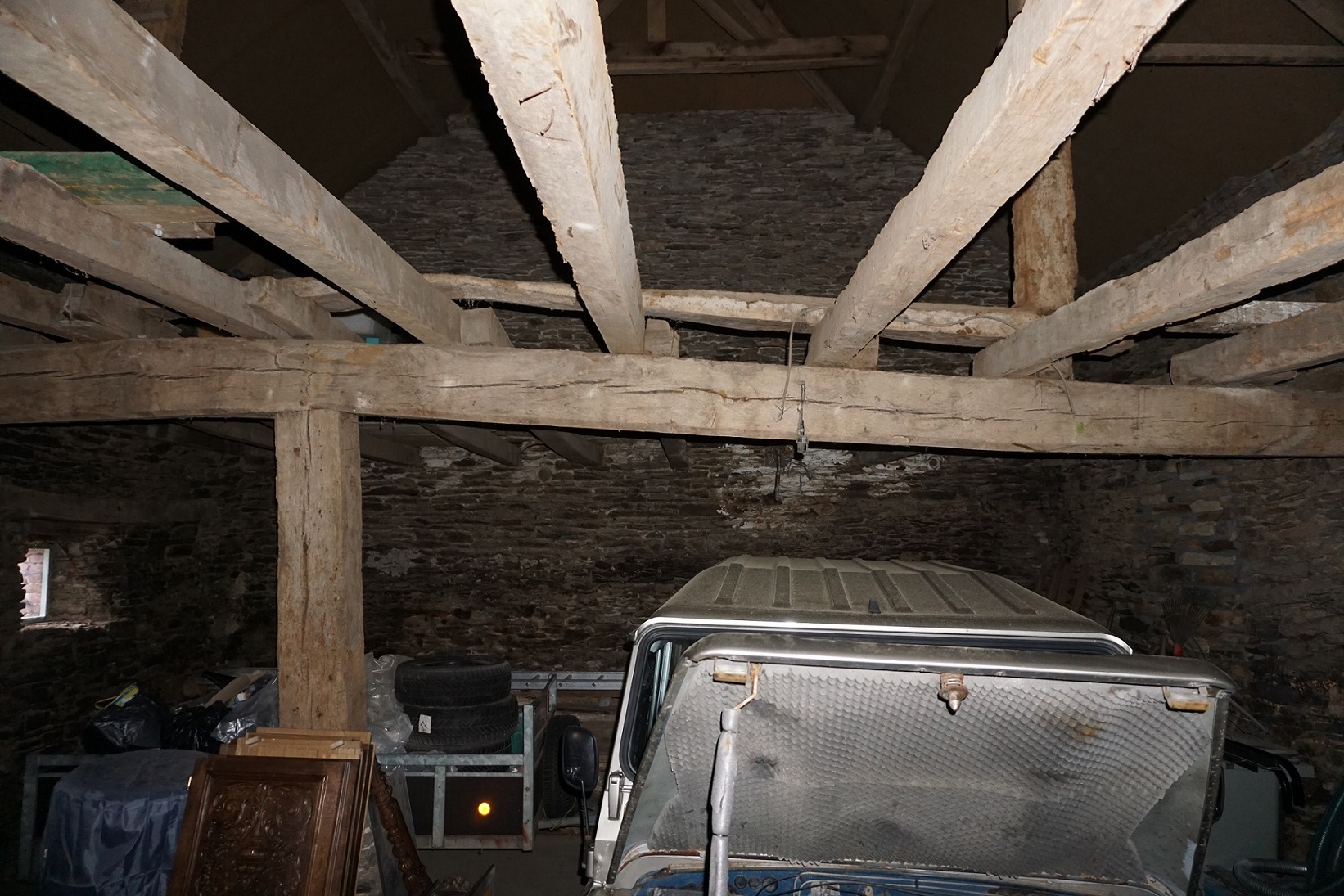 So we tore out everything, replaced the main beam with a new steel one, 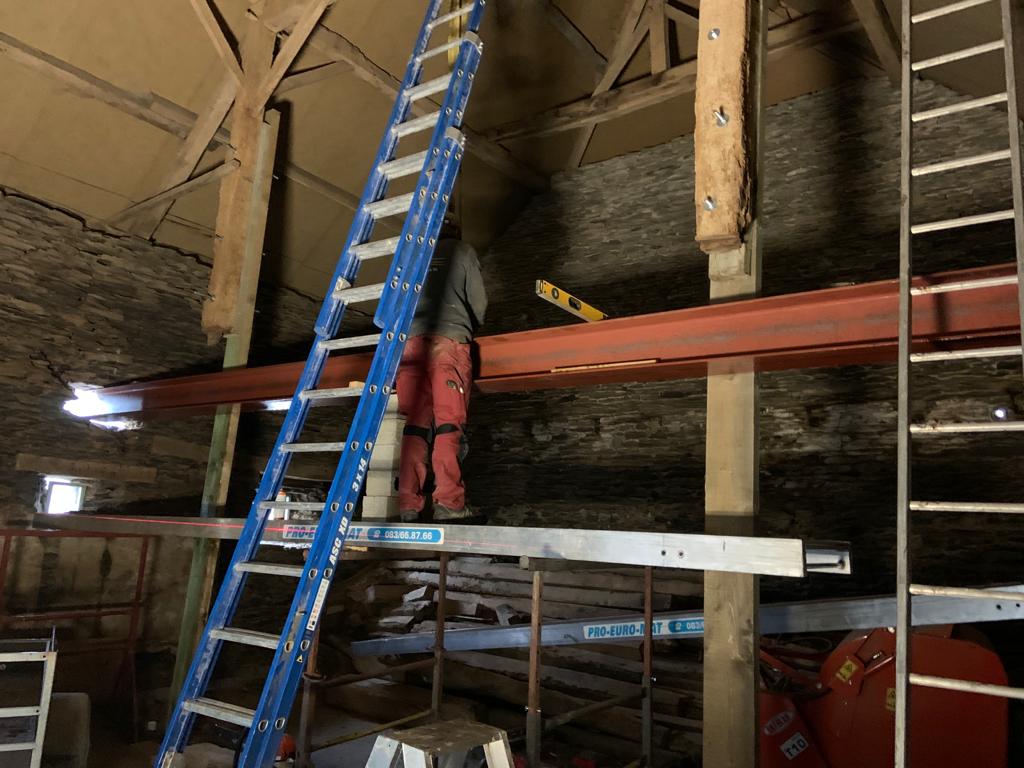 then put in a new ceiling, in the process creating almost 800 sq. ft. of new storage space upstairs. 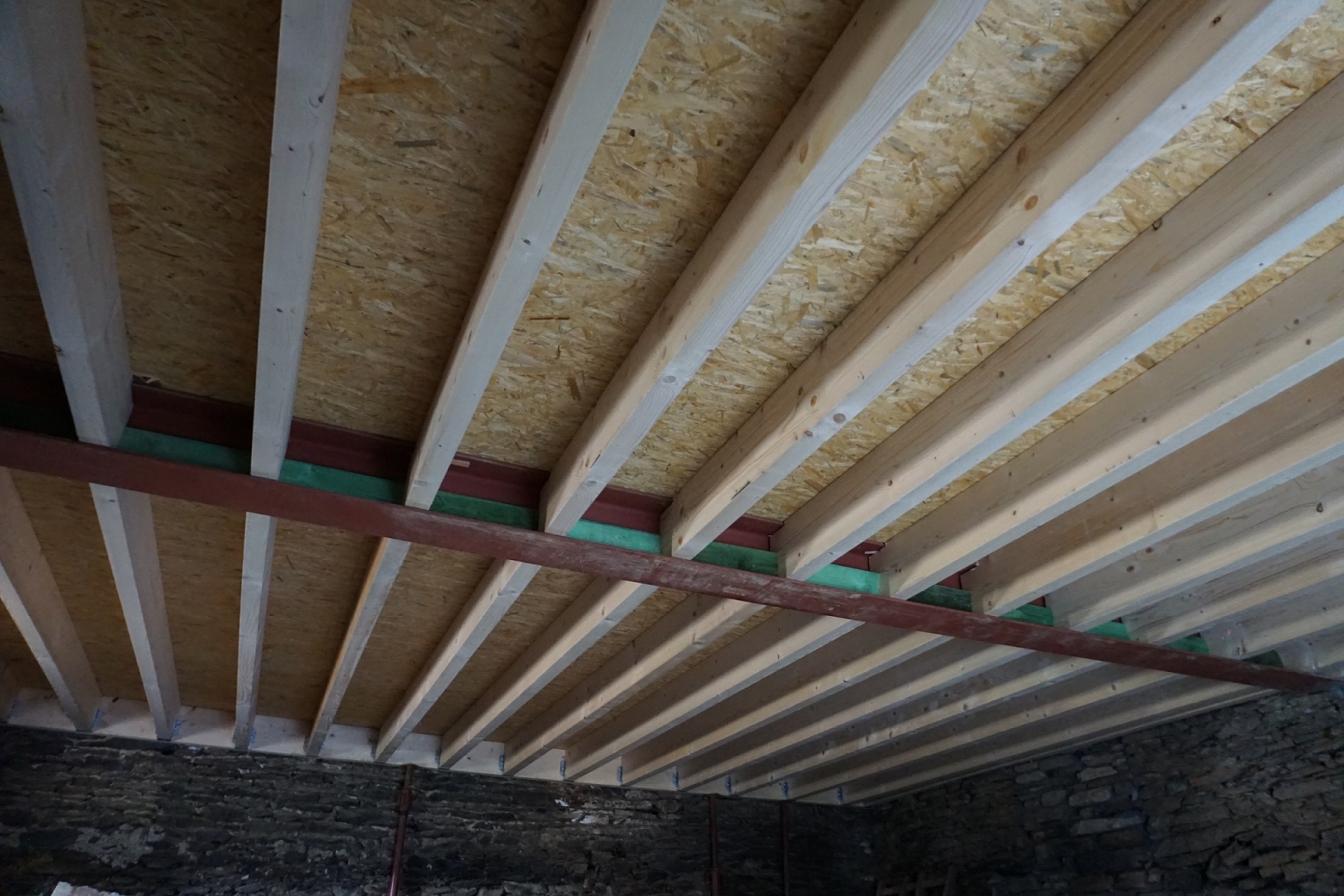 And finally it got some glossy white floor paint, 9 gallons of it... 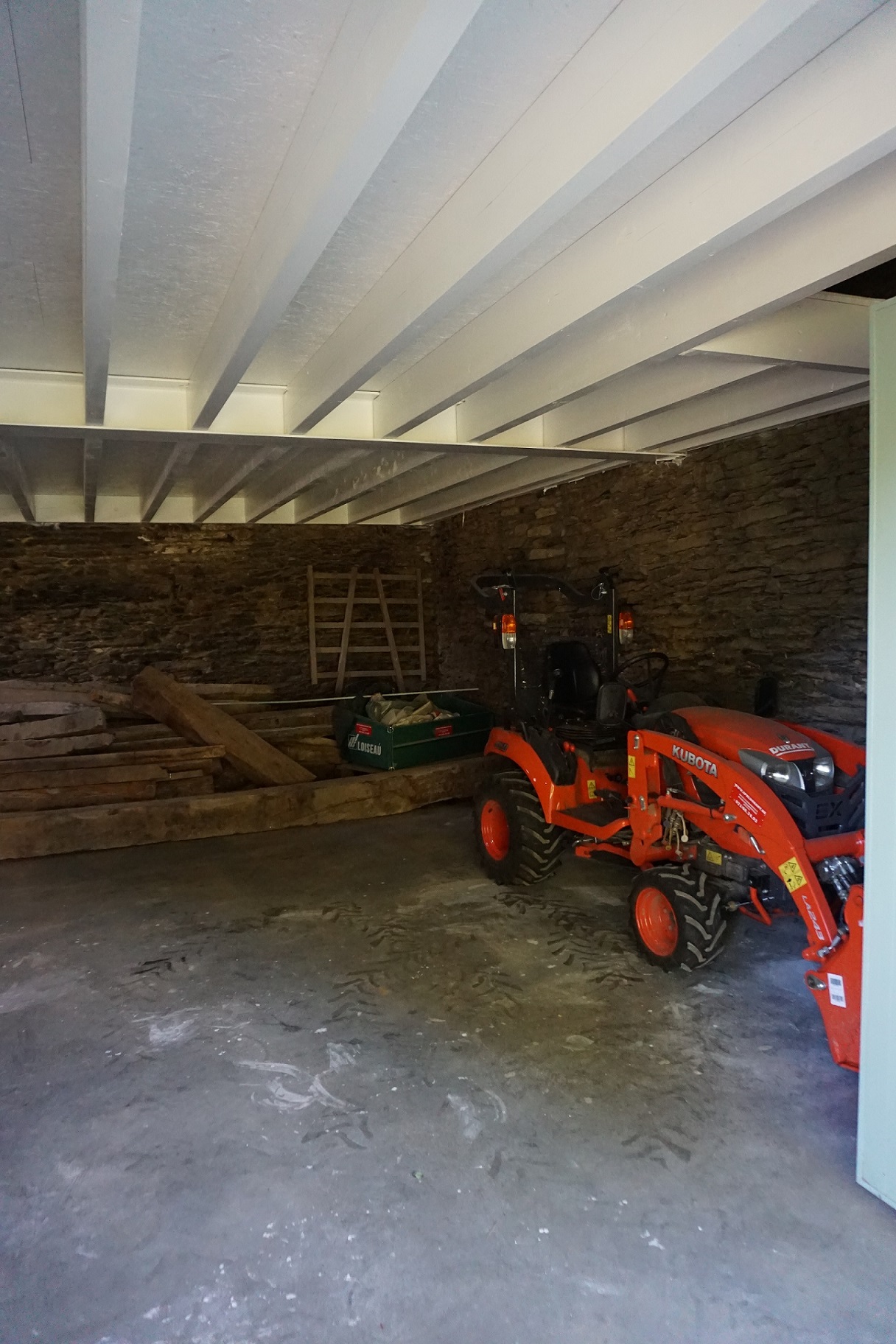 Looks fantastic ......... I would lovvvvvve to get a piece of one of those old beams!! The grain in that wood would look awesome !
Reactions: 1 user

How cool is that! Your building sounds like it would have tons of neat stories to tell if it could.
Nicely done, and thanks for sharing.
Reactions: 1 user

thank you for sharing, that is truly awesome!

What country are you located in ?
D

Thank you - nothing is too good for the BX! Although I must admit that it will also house all the attachments, a trailer and a '79 Monte Carlo...

It's free for the taking if you can come and collect... But believe me when I say it looks better than it really is. Most of the joists are sagging and half rotten, and the main beam is not much better. I didn't WANT to replace it, but in the end, after a discussion with my carpenter, realized I had no choice.

Only a few pieces can and will be reused in the house (17th century), which is undergoing major restoration and upgrading works.

85Hokie said:
Looks fantastic ......... I would lovvvvvve to get a piece of one of those old beams!! The grain in that wood would look awesome !
Click to expand...

In the Southern tip of Belgium, close to Bastogne and Luxembourg.


JimmyJazz said:
What country are you located in ?
Click to expand...

Thank you! The tower was built during the Spanish occupation. It came with a well (over which in the 17th century the house was built) marked "water for men and horses" on old military maps, and which I still use to cool wine...

If ever I have time (retirement is 3 years away, but I have a lot of things on my bucket list, and will have to divide my time between there and Okinawa), I'll go digging in the local archives.

This is what the tower looks like from the outside: 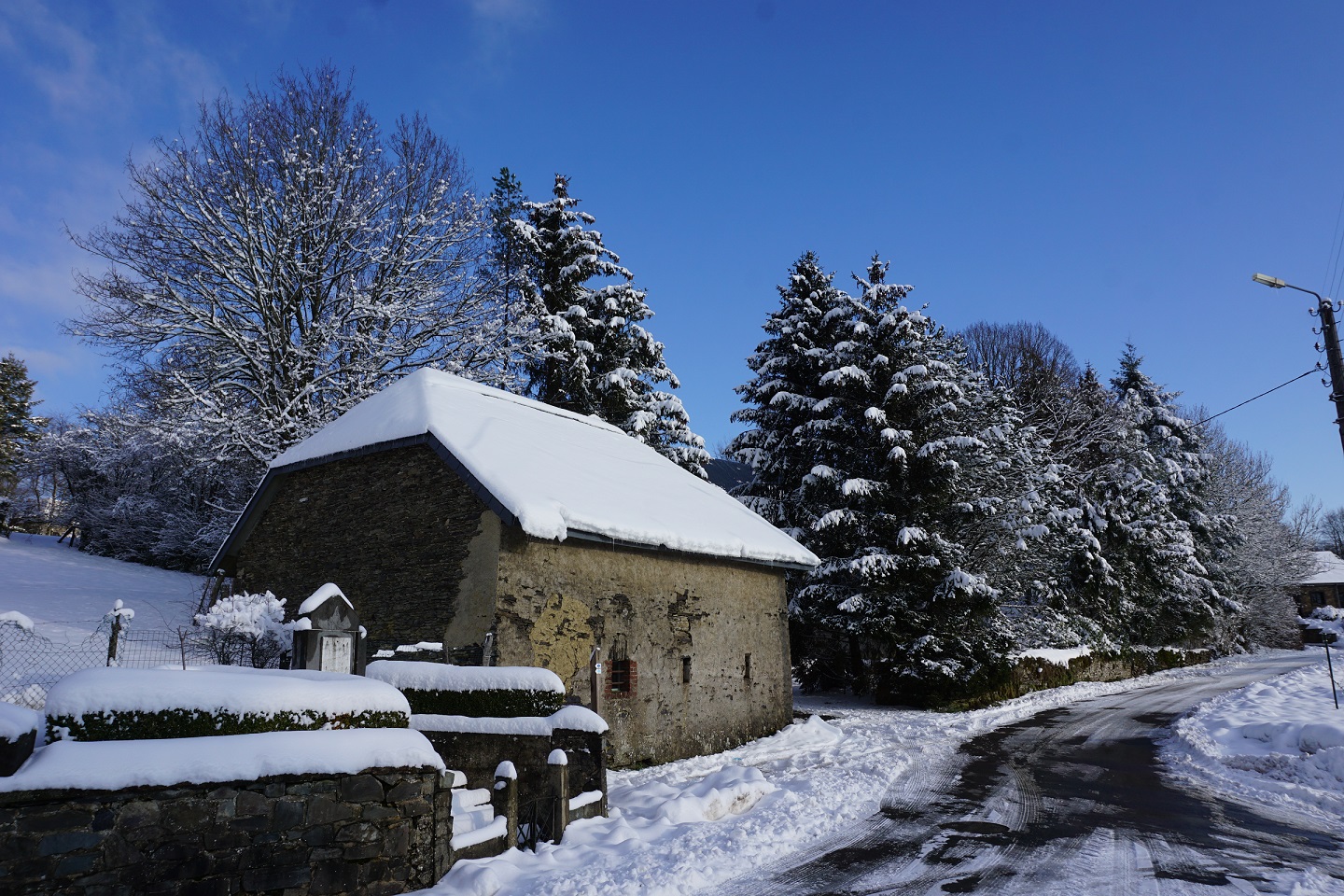 ken erickson said:
How cool is that! Your building sounds like it would have tons of neat stories to tell if it could.
Nicely done, and thanks for sharing.
Click to expand...

Thanks! Getting that H-beam in place wasn't laughing matter... The solution we finally came up with was to cut a hole in the wall (the 3-foot thick walls are built up from slate held together with clay - no mortar anywhere), then, with the contractor's truck-mounted crane, slide the beam inside. two of the firing slits can be seen behind the truck. 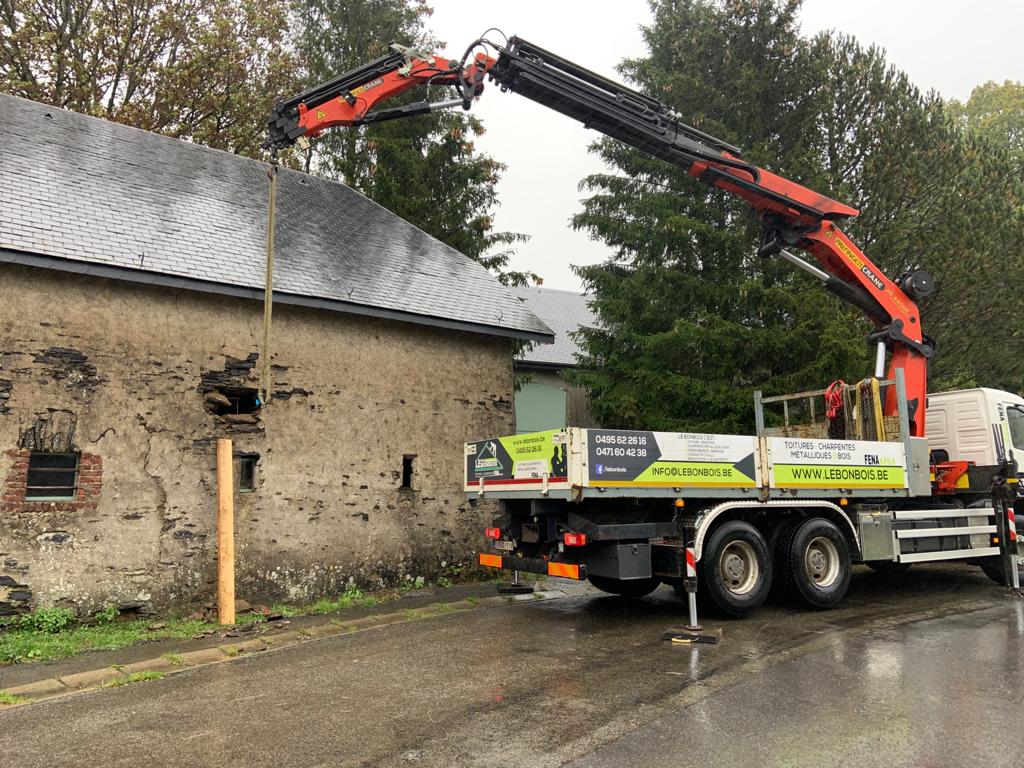 And this gives a better idea of the "status ante": 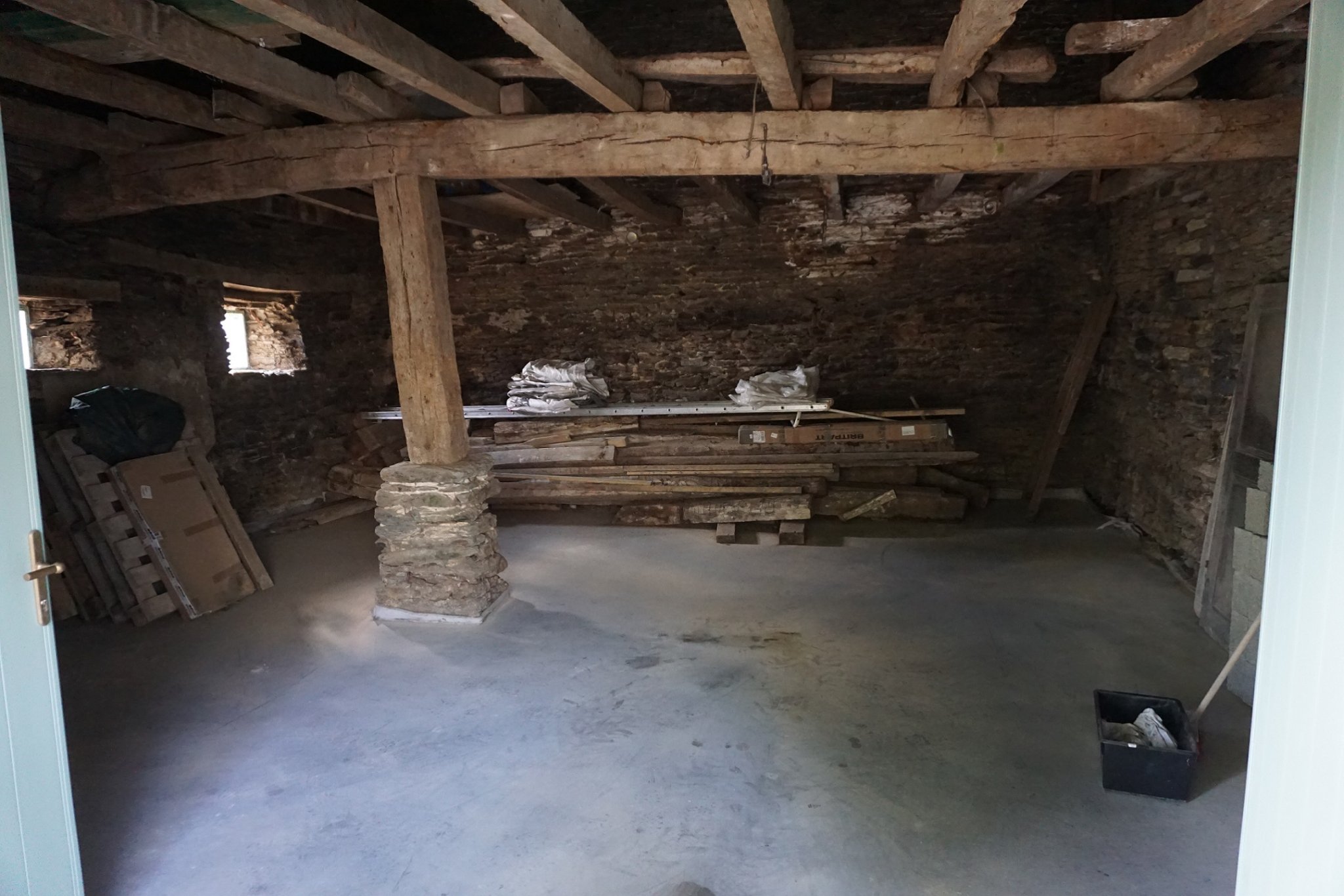 B737 said:
thank you for sharing, that is truly awesome!
Click to expand...

Beautiful! Thanks for the photos and history.

That is so cool and thanks for the write up and pictures.

Daylight said:
(retirement is 3 years away, but I have a lot of things on my bucket list, and will have to divide my time between there and Okinawa)
Click to expand...

Very nice place you have!

PLUS...unlimited Belgian beer now! AND great sushi half the time in the future, if the Okinawa you mentioned is the place I am thinking of! Hard to go to Japan now with the current virus situation...but this should be history in three years when you retire.
D

Thank you! Still an awful lot of work though to make it truly habitable... Living abroad really complicates things: my contractor (very knowledgeable in these old buildings) is extremely good at his job; rather too good, as he is in too much demand, and with both of us being far away most of the time -hence unable to check on him- he tends to favor customers who are physically present.

Beer shouldn't be a problem, what with two breweries in the village; the local (15 miles away, across the border in Luxembourg) white wine is quite nice too. Matter of fact, I have been thinking of planting some vines in the meadow (on a SW slope) just to see what comes of them. Not that anything would ever be harvested though: at night the local wildlife comes out of the forest and takes care of anything edible, unless it grows high on a tree!

It's that Okinawa, yes. But no sushi: the Lady of the Manor is into meat, thick slabs of it! Suits me fine: after all, mankind started using fire not to eat raw food anymore...

PLUS...unlimited Belgian beer now! AND great sushi half the time in the future, if the Okinawa you mentioned is the place I am thinking of! Hard to go to Japan now with the current virus situation...but this should be history in three years when you retire.
Click to expand...

PLUS...unlimited Belgian beer now! AND great sushi half the time in the future, if the Okinawa you mentioned is the place I am thinking of! Hard to go to Japan now with the current virus situation...but this should be history in three years when you retire.
Click to expand...

Time for an update... This already took place in March, but I was too ill to report on it until now.

My BX’s 16th-century house (lower level of a guard tower dating back to the Spanish era) is built of stacked stone with just some clay (no cement or chalk) for a binder. After centuries, part of that clay has been washed away and tree roots had dug their way between the stones, all the way through the three feet-thick wall.

As the building sits in a hillside, this allowed ground water to seep in: the uphill wall was always damp, and after a day of heavy rains, one could actually see little streams of water coming out of the wall, flooding the place. I had a roof gutter installed on the uphill side last year, but that wasn’t enough by far, so, after redoing the floor in 2019, and the ceiling in 2020, it was now the highest time to definitively tackle the flooding.

Much too big a job to deal with it myself, so in came the contractor (compulsory OTT content: with two Kubota backhoes... ). First he dug a trench around the building, down to where the walls sit on the bedrock; in one corner to a depth of over 11 feet (in that spot we also discovered a 16th-century well; unfortunately I didn’t have a metal detector…). 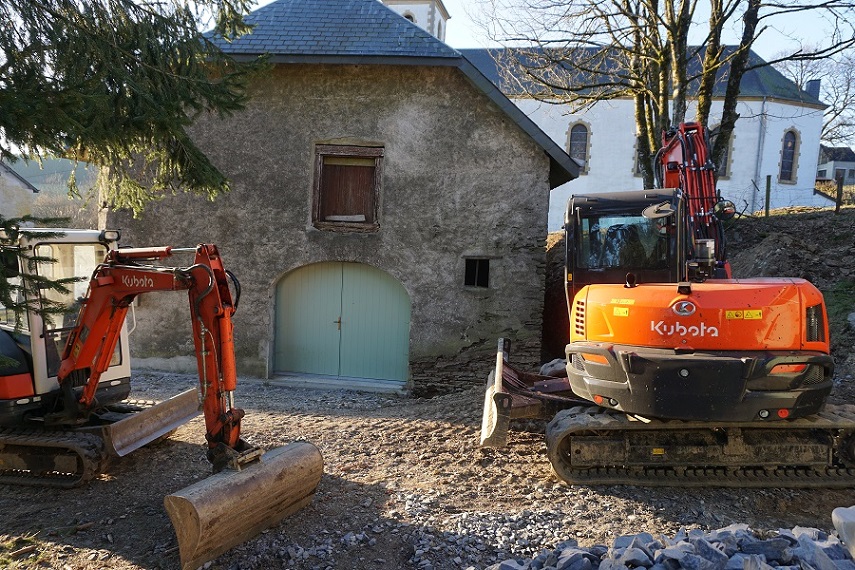 The walls were power washed, then got a thick coat of waterproof cement sprayed on, followed by two coats of liquid rubber and a sheet of heavy studded plastic. 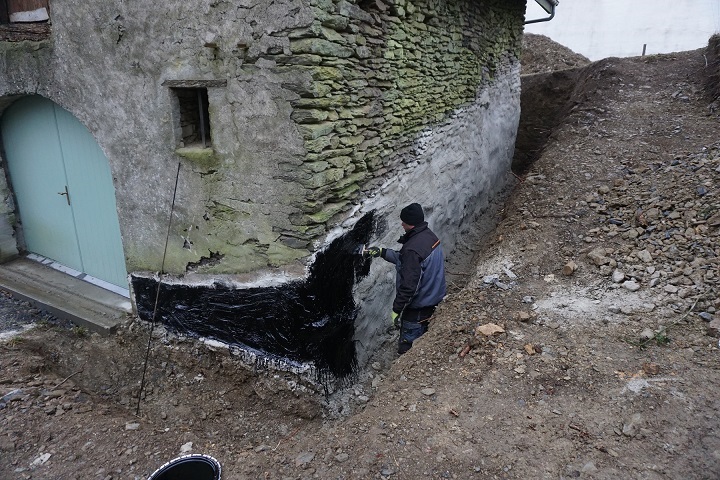 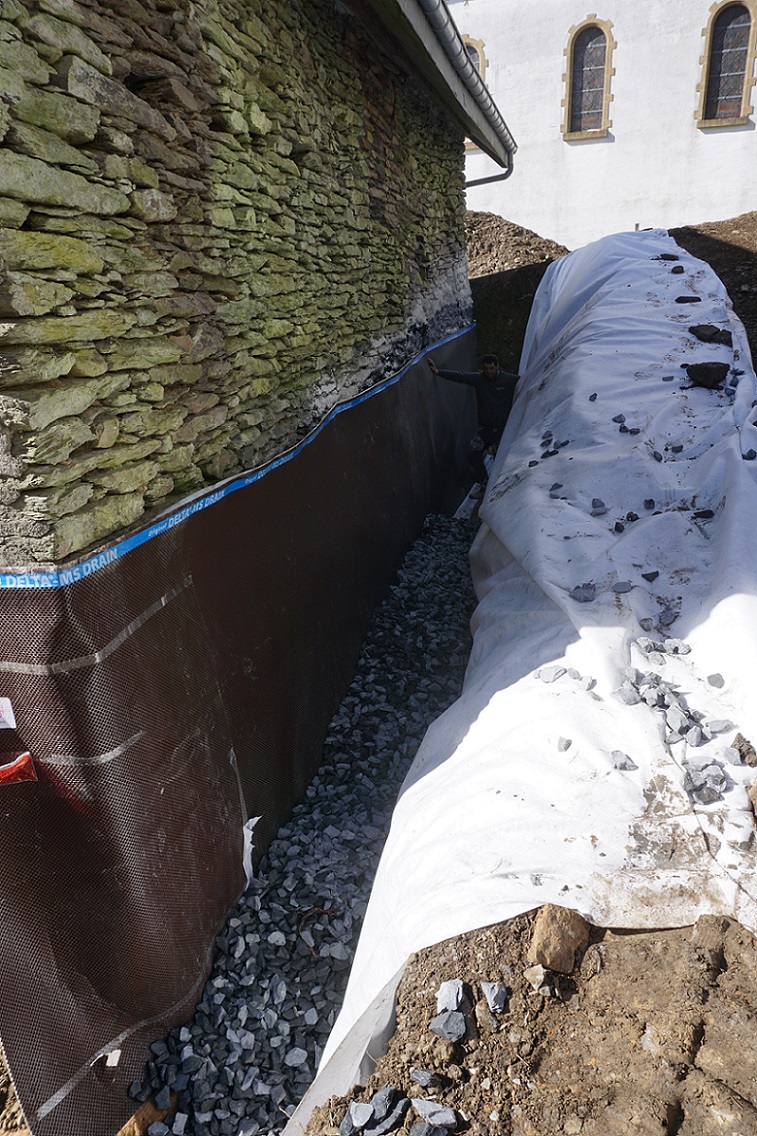 Then a fiberglass fleece was applied in the trench, to let water pass through but keep earth out. Finally, drainage pipes were put in, surrounded by and covered with railroad ballast-size gravel. In front of the entrance, a gutter was also installed. 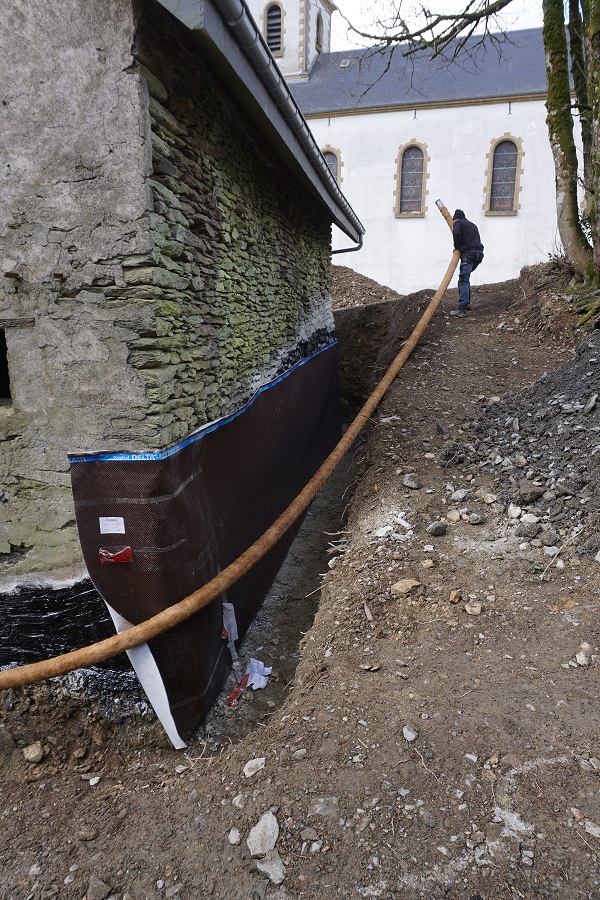 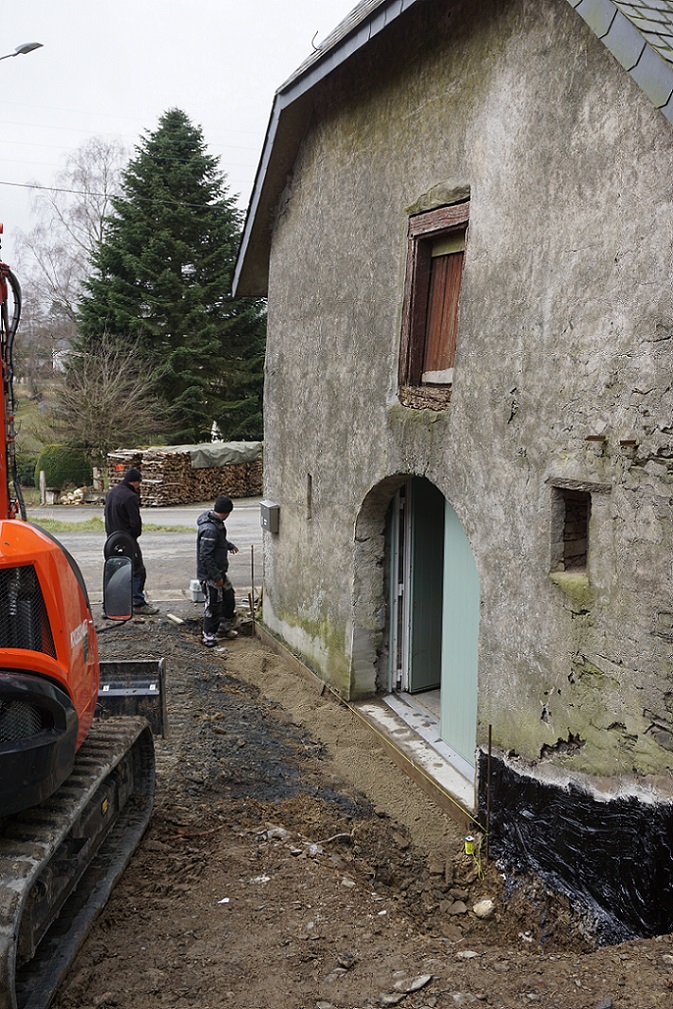 Everything was then connected to the sewer. Not without considerable difficulty though: the main sewer pipe wasn’t where we thought it was (and where it was supposed to be…), so two tall pines had to be taken down, the driveway dug up and an access pit to the drain installed. 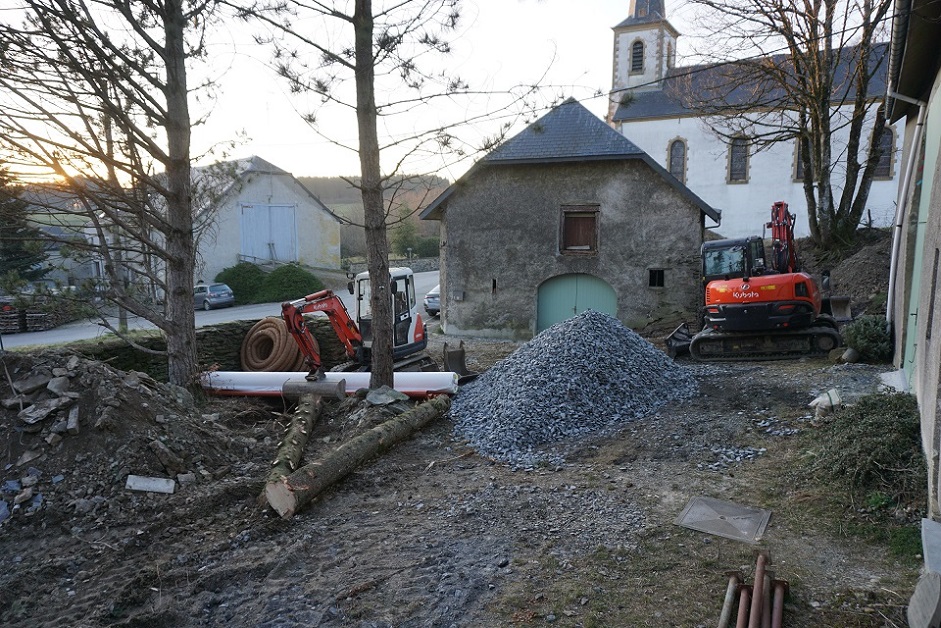 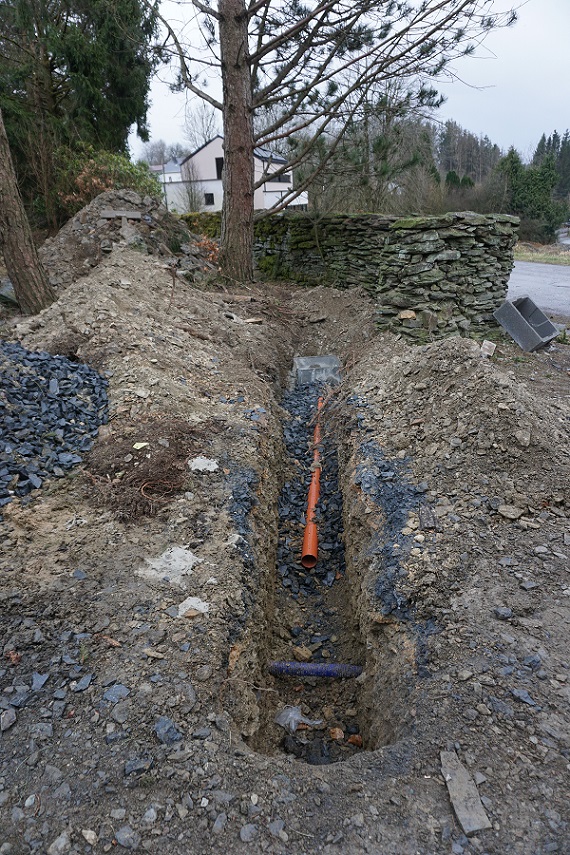 All this made the project 50% more expensive than originally quoted, but it sure is worth it! Part of the works also included replacing the fence between my property and the neighboring meadow and resurfacing (my kind neighbor allowed full access to his land, even to dig up the place and temporarily dump dirt). Driving new fence poles in that rocky soil was child’s play with the backhoe! 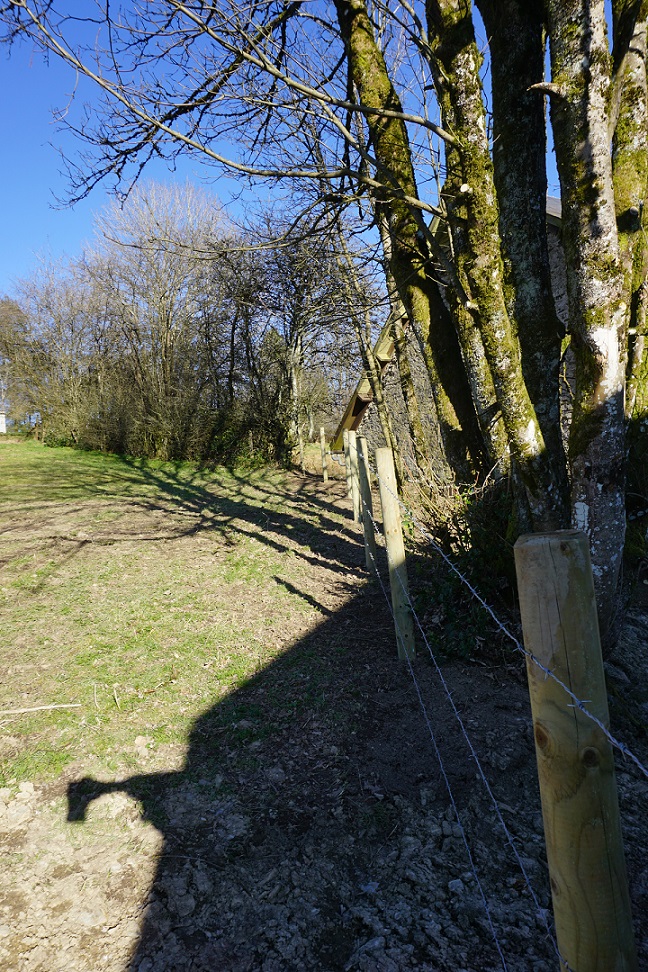 So now the BX, its implements, the Land Rover, trailer and -soon- my '79 Monte Carlo, at last sit completely dry and clean. Still to be done: installing window glass in the firing slits and electricity.

You gotta love the old buildings.

And a thank you to the good neighbor. Glad to see another example of good people still in these trying times.

This is so cool! I would hate to get the bill for this but good for you for preserving such a cool place!

85Hokie said:
Looks fantastic ......... I would lovvvvvve to get a piece of one of those old beams!! The grain in that wood would look awesome !
Click to expand...

I was just thinking the same thing
R