A reasonable alternative to 2 grease guns?

If my understanding is correct, it seems good shop needs 2 grease guns: one w/ a moly based grease for high pressure applications like FEL pins, and one w/ a lithium based grease for roller/ball bearings on the mower deck.

I'd like to just keep a single gun in the shop -- I use so little, it has a tendency to separate out before I can consume it. Is there a suitable all purpose grease (synthetic, or otherwise) that covers both applications sufficiently, or am I better off to just get a second gun and deal with it?

lucas hd green is probably the closest to those needs.

I just use whatever grease. Bought myself a lube shuttle for less mess.
G

I bought a NEW grease gun JUST for the BX23S, 3 years ago..
Last year I got another gun..... air operated, connected to a 30 gallon drum of grease, on wheels...

I have three: a black moly (pins), red lithium (bearings); and a blue synthetic for the deck spindles on my zero turn which require a very specific grease to work at all.

If the grease you’re using separates out before you use it (even it it takes a few years to use it all) sounds like you need a better quality grease. Roadworthy’s suggestion of the mini guns could fix it for you.
Reactions: 1 user

Use 3% moly on everything. 5% moly or above should not be used on rolling element bearings i.e. ball and roller. I've not found anything >3% at any retail outlets.

Watch the Messick's video - within the first 2 minutes it answers your question.

Elliott in GA said:
Watch the Messick's video - within the first 2 minutes it answers your question.

After watching the video, it seems like a high-temp grease can be used everywhere on the tractor; loader and bearings. He seemed to imply that it is a universal grease in tractor applications.
Reactions: 1 user
T

jyoutz said:
After watching the video, it seems like a high-temp grease can be used everywhere on the tractor; loader and bearings. He seemed to imply that it is a universal grease in tractor applications.
Click to expand...

Elliott in GA said:
Watch the Messick's video - within the first 2 minutes it answers your question.
Click to expand...

Bingo! Polyurea sounds like the way to go. Also seemed to imply the Kubota synthetic is a potentially better all-purpose grease with higher temp capabilities (if needed). Cost is of little concern since a tube will last me years. Thanks @Elliot for pointer!

NCL4701 said:
If the grease you’re using separates out before you use it (even it it takes a few years to use it all) sounds like you need a better quality grease.
Click to expand...

No doubt! Also, part of the reason I'm here ask'n about grease. The current tube was loaded ~2 years ago and I recall it was about the most expensive tube that Napa Auto parts had on the shelf; pretty sure it was synthetic, but, I can't remember which. I'll find out when I open the gun and toss the remainder to replace with one of the above.

You can use Valvoline's Crimson grease which is a tacky extreme pressure lithium soap grease. There is no need for a more expensive grease for things like loader pins, and just about anything else on the type of tractors that we own. The only thing on my tractor that I would be greasing that might require an EP grease rating is the needle bearings of the universals on the snowblower driveshaft. As long as you keep everything greased on a regular basis, you shouldn't have any problems. When I last bought the Valvoline Crimson grease it was around $3.50 a tube on sale. The nice thing about the Valvoline grease is that it is water-resistant grease.

Valvoline’s Crimson grease contains select extreme pressure additives to protect and lubricate during heavy shock loading periods and is fortified with oxidation and corrosion inhibitors for long service life. The product has excellent resistance to water wash-out.
Click to expand...

My Kubota tractor specifies “multipurpose” grease…so that’s what I use for the tractor.

I don’t go along with the saying that “grease is grease”.… because that simply isn’t true…that’s why different greases are manufactured and specified…. because they’re different. Moly should not be used for roller bearings and while general purpose is better than none…. it’s not the best for loader pins/pivots.

It’s no different than using the proper motor oil in the engine…and the proper hydraulic oil in the hydraulics. They’re both “oil”…but would you use the same stuff in both just because it’d be simpler?

It’s your equipment. And you get to Do what you want.… but if you look thru these forums most people ask questions because they want to do what’s best for their equipment.

PS: Why would anyone want to use “High Temp grease” in Winter on a pin/pivot that never gets hot?

I had the same issues and just decided to go with Lucas Xtra HD for everything. That would include loader/backhoe and other misc. spots on the tractor and for the spindles and steering on a Deere garden tractor. It's easy to find in stores and generally well regarded.
Reactions: 1 users

I didn’t see that at all.

Mike Wiles (AskTractorMike) and I communicate directly from time to time. He’s a really really REALLY nice guy and very knowlegeable about tractors and such. By his own admission…in his opening statement …he does NOT know about grease.

In the video he introduces the president of AET, the seller of LubeShuttle, a guy named “Wes”…who is a SALESMAN for the LubeShuttle products and Mike refers to him as an “expert” on grease.

Further, throughout the video “Wes” contradicts himself, first by tossing out phraseology with which he hopes to Impress the listener with his use of “buzz-words”…. then by misapplication of those very phrases. In particular, Points 3 and 10 and subsequently, he says the “type” of grease you use is “not that important”….(the differentiation of which he refers to by PRICE)….then he goes on to say that there ARE ACTUALLY valid reasons for different grease thickeners (such as Lithium, Calcium, Moly, Poly-urea)….and then acknowledges that MOLY is BEST for PINS and BUSHINGS but NOT for BEARINGS. Then (item 10 and subsequent) he emphasizes that after all the comments in which he says it’s NOT IMPORTANT for “compact tractors” what you use…. he emphasizes to “follow the manufacturers’ instructions” as to what specific type grease to use.

He contradicts any notion that he is an “expert” on greases when he promotes poly-urea/synthetics by “why it’s used in sealed bearings”….WHICH ARE NEVER GREASED because they are “sealed” not not serviceable by operators…. the implication being that if it’s good enough for sealed-bearings that never get greased it must be ”best” for tractors, skid-loaders, balers, etc… … THEN he Completely negates his own recommendations by stating it is ”not necessary for compact tractors”.

HERE is what he DOES say which is CORRECT: Lithium is probably the most commonly used general purpose grease. Moly should be used on pins/bushings such as on FELs. Do NOT MIX different types of greases. FOLLOW your Mfr’s recommendations.

gotta agree with George here. I just broke down and started running two grease guns. one with moly one without. I hemmed and hawed over it, in practice its not a big deal, just get your second gun and move on with life
Reactions: 3 users
A

This is what I have been using for the past 20 years on my Kubota and implements, not a single issue over the years. 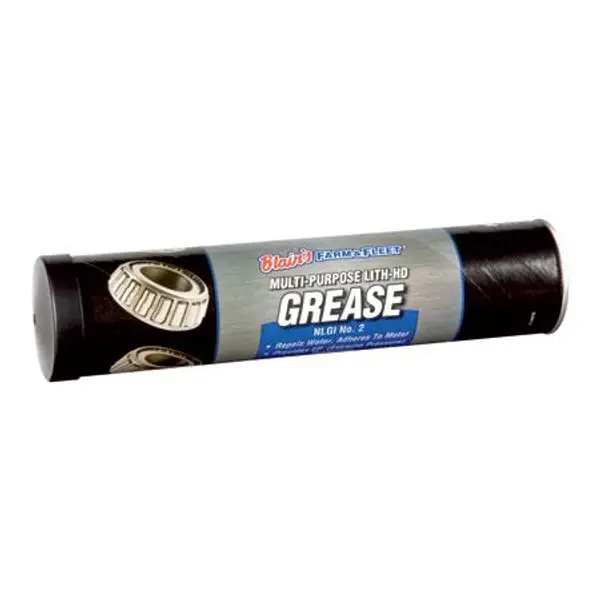 NLGI2 is what everything calls for so thats what I use. In all those years I did have a spindle go bad, but thats because I stored the darn thing outside and the seal came loose allowing water to get in. I no longer store it where it can get wet and no longer use a power grease gun on the spindles. Both my loader and backhoe get the same grease, and they both have been working just fine. I also use Ford spec'd Valvoline grease when packing bearings. 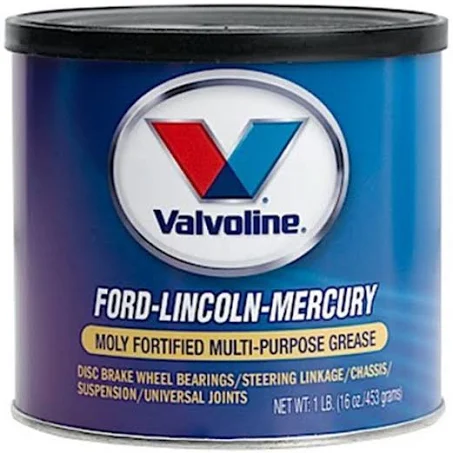 Never had a bearing go bad in the 30+ years been using it.

Once I started using high quality polyura grease( kubota blue and lucas hd) I haven't gone back to lithium based soap. The difference between the two polyura is so minimal, I cant hardly tell a difference. Both work great for loader pins. The only thing I fill with true moly grease is the backhoe. I still use polyura in the loader. They work great, cheap, and readily available. I just didn't like how some lithium based grease separated, and got hard in joints. Seemed to be very temperature sensitive too. Polyura had a bad history, but the new ones are a game changer. They apparently figured out the correct chemistry. You will notice most oem tractor manufacturers now push this type of grease. I too believe too, that you shouldn't mix types, only brands.
I